Father Frost, the Russian Santa Claus, isn’t all that different from the Santa you’d see in the West, except that he has a female helper. In fact, he is the only Santa in the world who has a female sidekick. The Snow Maiden travels with Father Frost to deliver gifts, acting as an intermediary between him and the children.

The Snow Maiden has mixed fairy tale origins. In one version of the story, she is the daughter of Father Frost and the Snow Queen, whom you may recognize as the basis for Elsa in Disney’s Frozen. In another version, a childless couple made the Snow Maiden out of snow and magically brought her to life to be their daughter, but she melts when trying to playfully leap over a fire.

The Snow Maiden gained popularity in the 19th century when Aleksandr Ostrovsky wrote a play about her called The Snow Maiden. This play was later set to music by the famous composer Tchaikovsky and then made into an opera. In this tale, the Snow Maiden is an immortal who wants to feel love like normal humans do. She convinces her mother to give her a magical wreath that bestows the ability to love, but as soon as the Snow Maiden leaves the winter forest in search of romance, she melts in the sunlight.

Today, the Snow Maiden is considered Father Frost’s granddaughter rather than his daughter. 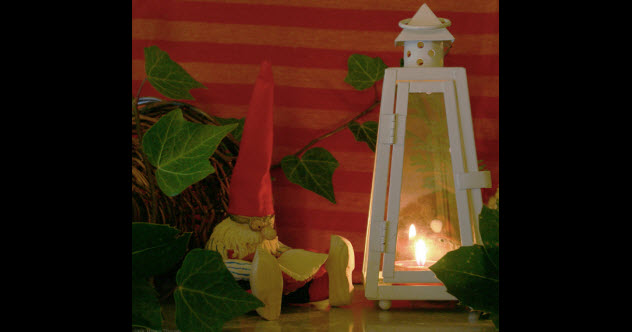 A nisse (the plural is “nisser”) is a tiny gnome with a red hat and a long, white beard, like a typical garden gnome. The nisser live on farmsteads helping farmers with chores. All the nisser ask for is trust, respect, and a buttery porridge every Christmas Eve. Oh, and that porridge had best be filled with lots of butter, by the way. Otherwise, a nisse will fly off in a fit of rage.

One tale tells of a servant girl who decided to play a trick on her farm’s nisse by hiding the butter on the bottom of the porridge bowl. When the nisse saw no butter, he stormed off to the barn and executed the family cow. When he returned from his act of bovicide and saw that the butter was indeed in the bowl, he was stricken with regret. He replaced the cow by stealing one from a neighbor. Nisser were known to steal from neighbors to benefit their own farms.

Nisse is derived from “Nils,” which is Scandinavian for “Nicholas.” A larger nisse, called a julenisse, is the Scandinavian Saint Nicholas. Over time, the household nisse evolved into the julenisse, a Christmas gift bearer with a striking resemblance to Santa Claus. Today, Scandinavians still leave buttery porridge in their barns for the nisser to eat on Christmas Eve. 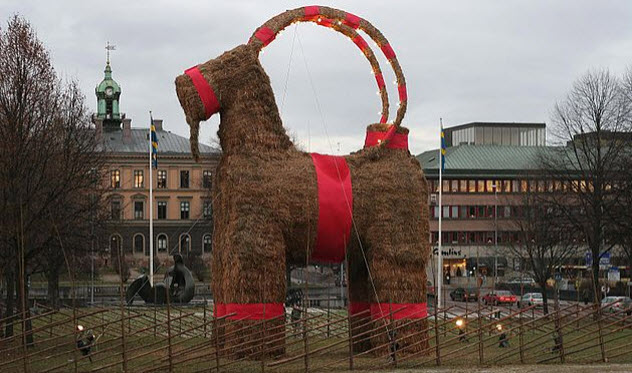 The julenisse rides around in a sleigh, but it’s not pulled by eight reindeer. It’s pulled by a single goat: the Yule goat. The Yule goat’s origins may lie with the Norse god Thor, who flew across the sky in a chariot pulled by two goats. It is a Swedish holiday custom that a person dresses up as the Yule goat and is led from house to house.

Perhaps most interesting is the way the Yule goat has been celebrated over the years. In the 1966 holiday season, an artist in Gavle, Sweden, erected a straw Yule goat the size of a house, thinking it would be a good tourist attraction. But the citizens of a rival municipality burned the straw goat to the ground.

Ever since, the people of Gavle have erected a goat each Christmas season only to have it burned and destroyed. It’s become a tradition. One year, the goat was taken down by flaming arrows. Another year, someone crashed a Volvo into it at full speed.

Once, a tourist was tricked into lighting the Yule goat on fire with a lighter. He didn’t know he could be arrested for vandalism and destruction of property. If the Yule goat can survive until New Year’s, it is dismantled by the citizens who protected it. But it rarely survives.

Krampus, the Norse anti-Santa, has entered mainstream culture in the West, thanks in part to a big-budget movie release during the 2015 holiday season. But once children find out about Krampus, it won’t be anticipation that keeps them awake on Christmas Eve, it will be nightmares. Krampus is the Christmas devil. His appearance is similar to a vampiric satyr or faun, with goat horns, pointy teeth, and black, matted fur.

Krampus is the lump of coal personified. Whereas Santa rewards good children, Krampus punishes bad children by whipping them with sticks. Naughty kids beware: If you hear a chain with bells, Krampus is coming to drag you to the underworld where you will face the punishment of his mother, Hel, the Norse queen of the dead. A modern holiday tradition in Eastern European countries is for adults to dress up in scary Krampus costumes and run around scaring children. 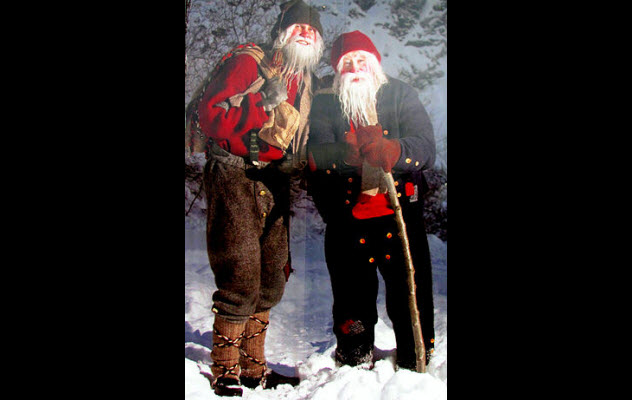 In Iceland, the duties of Santa are performed by the Yule lads, 13 brothers who leave presents in children’s shoes. However, the Yule lads weren’t always so friendly. The legend goes that they were born of murderous trolls and terrorized people in their homes by stealing food and causing a ruckus.

Each of the Yule lads had increasingly uncomfortable names that also described their functions, like Candle Beggar, Pot Scraper, Door Slammer, Door Sniffer, Spoon Licker, Bowl Licker, Window Peeper, Sausage Swiper, Sky Gobbler, and Meat Hook. Then there was Gully Gawk, who stole cows’ milk, and Sheep-Cote Clod, who “came stiff as wood to prey upon the farmer’s sheep” according to an Icelandic poem. The 13th Yule lad, Stubby, is sometimes combined with Pot Scraper.

In 1746, Icelandic authorities made a public decree to stop parents from using monsters to frighten their children. This was the beginning of the Yule lads’ transformation into benign Christmas characters, and they absorbed the traits of Santa Claus. 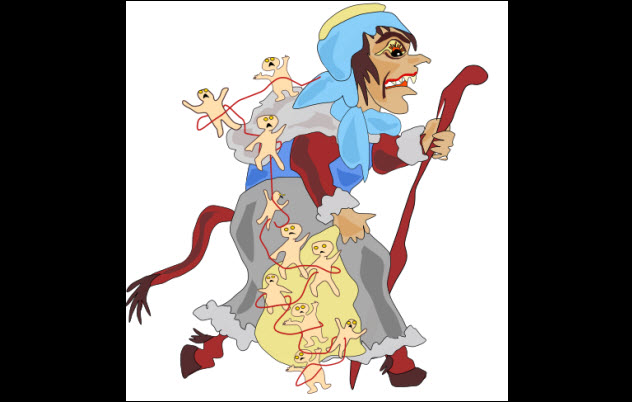 A horrible beast that survived the 1746 nerfing of Icelandic bedtime monsters was Gryla, the mother of the Yule lads. Gryla had been married twice before meeting the father of her Yule lads. She ate her first husband, and irreconcilable differences ended her second marriage.

Despite her apparent desirability, Gryla was a monstrously ugly troll. She had three heads with three eyes in each head, curved fingernails, and long ears that looped up and attached to her nose. Human children were her favorite snack.

Gryla came to town shortly before her Yule lads, visiting each house to speak with the parents about whose children were naughty or nice. Gryla had 15 tails, each with 100 sacks tied to the end. She sought to fill these sacks with naughty children and carry them away to her lair, where she would cook them in a nice stew and eat them. Gryla debated all night long with distraught parents who wanted to convince her that their children were good little boys and girls.

Gryla wasn’t the only monstrous threat Icelanders had to worry about during the Christmas season. Her pet, the Yule cat, was just as vicious and far more arbitrary.

In Icelandic folklore, the Yule cat is a monstrous feline that lurks in the snowy hills. During the Christmas season, he peers into warm houses, seeking lazy children. The Yule cat believed that if children were diligent in their chores, parents would reward them with new clothes. So he would kill and eat any child who was wearing old clothes. The Yule cat apparently made no distinction between those who were lazy and those who were too poor to afford presents.

It was paramount for Icelanders to dress head to toe in new clothes before Christmas. Farm workers weaved day and night to create new garments for themselves and their masters, fearing the Yule cat would get them if they didn’t. Some people think the myth of the Yule cat was invented to push farmhands to work harder during the holiday season. 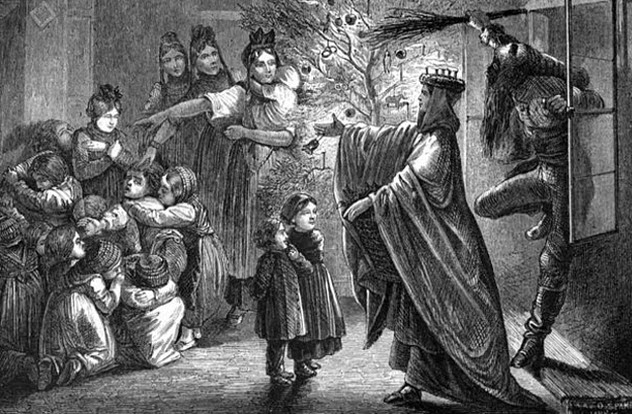 Hans Trapp, another of Santa’s wicked sidekicks, is based on the real 15th-century German knight Hans von Trotha. After waging war against an abbey, he was excommunicated by the Pope. Legends of Hans von Trotha spread until he became known as Hans Trapp, a folkloric figure in France.

According to the legend of Hans Trapp, he was a greedy, violent man who made a deal with the devil to gain fortune. The church found out about Hans’s blasphemous deal and excommunicated him, seizing his land and profits. Driven away by society, Hans found refuge in the woods, where he once again dabbled in the dark arts. The isolation drove him mad, and he began to crave human flesh.

When Hans could stand it no longer, he disguised himself as a scarecrow and waited by a nearby road. When a boy passed, Hans stabbed the boy with a splinter, killing him, and then dragged the corpse back to his cabin in the woods. Hans roasted the boy’s flesh. But just as he was about to take a bite, Hans was struck by a lightning bolt from God and died.

Legends of Hans Trapp arose around the same time as legends of Saint Nicholas. The two mythologies mingled so that Hans became one of Santa’s helpers. Hans punished naughty children in his scarecrow guise. 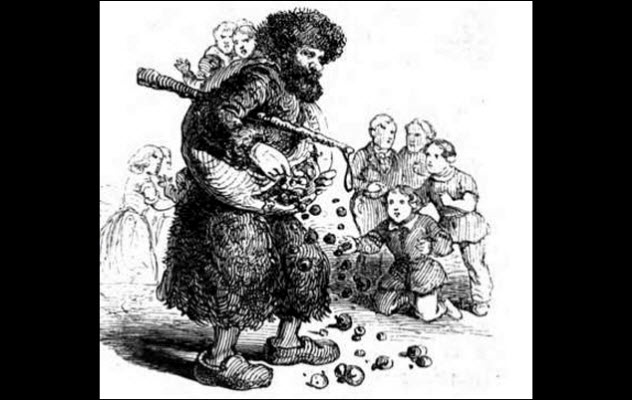 In Germanic folklore, Santa has a companion named Rupert the Manservant. But it is not Santa whom Rupert truly serves, it is his Lord and Savior Jesus Christ. Rupert dresses in the brown robes of a monk, carrying with him a sack of goodies and a slapping rod. He goes from home to home asking children if they can recite their prayers. Should the children stutter, mumble, or forget, Rupert hands the rod to the parents and tells them to do what they must. If the children remember their prayers, they get sweets or presents.

But Rupert may not be as pious as he seems, or perhaps he’s been absolved of some ghastly sins. His name in Old High German, Hruodperaht, suggests a remote possibility that he may have been the servant of the goddess Peraht, otherwise known as Perchta the Belly Slitter.

Perchta was a mythical goddess who enforced community taboos by punishing loners who refused to celebrate the holidays with everyone else. With the advent of industrialism, Perchta’s role evolved into that of a taskmaster who punished textile workers for being lazy. If you were a slacker, Perchta would cut open your belly and fill it with rubbish. 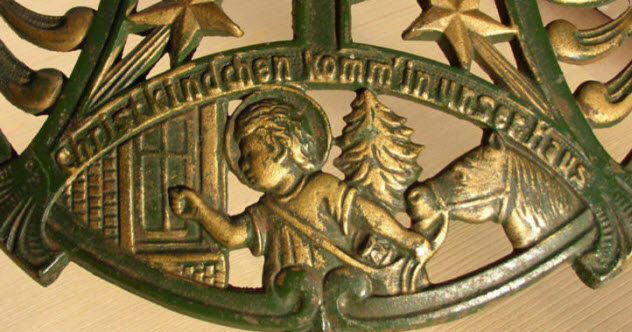 In the 16th century, the Protestant reformer Martin Luther didn’t appreciate the veneration of Saint Nicholas, which he thought distracted people from the celebration of Christ’s birth. In his household, Martin Luther moved the day of gift giving from December 6, Saint Nicholas’s day, to Christmas Eve. He told his children that Jesus Christ brought them their Christmas gifts, not Santa. This tradition spread to his followers. Baby Jesus as the Christmas gift giver became known as the “Christkind.”

As angels began to be portrayed as more feminine in plays, the image of the Christkind evolved. She became a teenage girl who drifted gracefully in a white dress, holding a candle and wearing a golden crown upon her head. The author Clement Miles described this incarnation of the Christkind as “hovering between the character of the divine infant and that of an angel.” This Christkind is also accompanied by Christmas helpers like Hans Trapp and Rupert the Manservant. Probably not what Martin Luther had intended.

For more of Matt’s lists, check out his blog.