There are countless beautiful destinations to visit around the world. But some places are either too dangerous, too protected, or too mysterious to explore.

Several locations across the globe—from man-made buildings and structures to natural habitats that contain dangerous species, religious mysteries, and secrets—make these areas forbidden to outsiders. 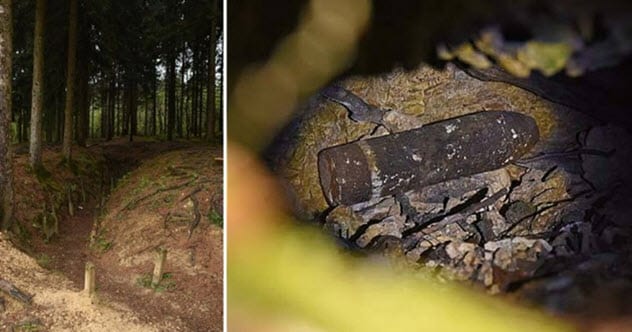 Not all scenes in France are made of rolling green hills filled with gorgeous villages. In fact, there is one deserted area that has been forbidden for nearly a century. In a region near Verdun, France, lies a virgin forest known as the Zone Rouge (aka the Red Zone). Nobody lives there, nothing has been built there, and it is actually forbidden to enter.

Before World War I, Verdun was mainly farmland. The area quickly changed during the war after millions of rounds of artillery shells were fired. The ground was churned up, the trees were smashed, and the towns were destroyed by explosives. The war ended in 1918 and left the villages a casualty of war.

The French government considered the cost of rehabilitating the land but ultimately decided to relocate the local villagers. All the shells and munitions were left in the area, and it was deemed Zone Rouge.

The 1,190-square-kilometer (460 mi2) area is still strictly prohibited by law from public entry and agricultural use. Authorities are working to clear the land. However, at the current rate, many believe that it could take 300–700 years to complete or it may never be fully cleared.[1] 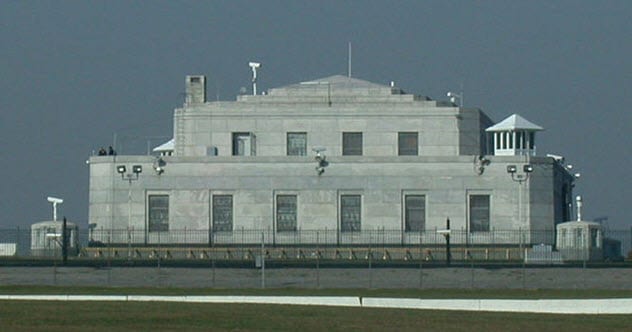 One of the best-kept mysteries in the US is located just 48 kilometers (30 mi) southwest of Louisville. The United States Bullion Depository (aka Fort Knox) is stacked with glittering gold bricks . . . we think. Very few people have entered the “gold fortress,” leaving many unanswered questions about the location.

Construction of Fort Knox was completed in 1936, and it sits on a 109,000-acre US Army post. Gold was shipped in at that time by trains manned by machine gunners. Then it was loaded onto army trucks protected by a US Cavalry brigade.[2]

Just to be clear: Technically, Fort Knox (the US Army post) is adjacent to the US Bullion Depository. But the term “Fort Knox” is often used to refer to the gold vault building.

The US Constitution and the Bill of Rights were both stored there for short periods. The US government figures that the United States Bullion Depository holds nearly 4,582 metric tons of gold, which is worth more than $175 billion. The facility has one of the most advanced security systems known. What goes on there is mostly a secret, which is how the phrase “as secure as Fort Knox” originated. 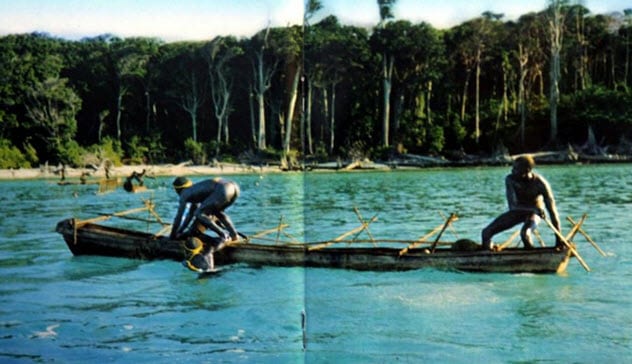 As hard as it is to believe, there are still “uncontacted” indigenous groups, which means that they maintain no contact with modern civilization. The Sentinelese people of North Sentinel Island are one of those few remaining uncontacted tribes.

In 1991, an outside expedition from India floated coconuts in the water toward the island inhabited by the Sentinelese, who are known to be hostile to foreigners. On two such trips, an Indian team made contact. The Sentinelese wanted the unfamiliar coconuts, but they did not really welcome the outsiders.[3]

It is estimated that about 80–150 people live on the island, and their language isn’t known to any outsiders. Little is known about the tribe, which keeps them a mystery to many. But we do know that they don’t care much for company.

In 2018, a US missionary attempted to contact the Sentinelese people but was quickly killed by bow and arrow. The group has made it clear for years that they have no interest in making new friends.

In 1896, a convict from the Great Andaman Island Penal Colony escaped on a makeshift raft and eventually washed ashore on North Sentinel Island. His remains were found days later with a cut throat and several arrow wounds. It’s clear that the Sentinelese don’t want any contact, and it’s best to leave it that way.

7 Chapel Of The Ark Of The Covenant
Ethiopia 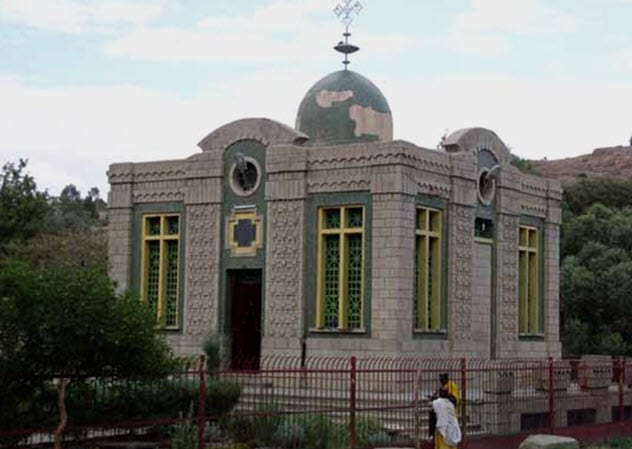 One of the most sought-after artifacts from the Bible is the Ark of the Covenant. The legendary object was built around 3,000 years ago to house the stone tablets containing the Ten Commandments. The Ark vanished from history after the Babylonian Empire conquered the Israelites. Nobody really knows if it was destroyed, captured, or hidden.

According to Ethiopian lore, the Ark of the Covenant is located at the St. Mary of Zion Cathedral (aka the Chapel of the Ark) in Aksum. The church only allows one man to see the Ark, and he is a monk who acts as the guardian of the artifact.

Although some reports claim that the Aksum object is only a replica of the Ark, nobody else is even permitted to enter the chapel to study the artifact, making it a forbidden place that you wish you could visit.[4] 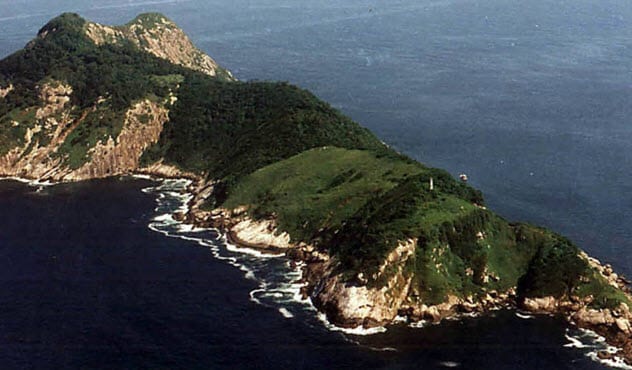 Around 150 kilometers (93 mi) south of downtown Sao Paulo is Ilha da Queimada Grande, better known as Snake Island. The island sits about 40 kilometers (25 mi) off the coast of Brazil, and humans are forbidden from entering the island. Snake Island got the name from the various snakes lurking across the island. Researchers believe that there is about one deadly snake for every 0.09 square meter (1 ft2) on the island.

The island is home to the golden lancehead, a unique species of the pit viper, which is known as one of the deadliest serpents in the world. They can grow to be over 0.5 meters (1.5 ft) long, and it is estimated that anywhere from 2,000 to 4,000 of these deadly snakes occupy the island.

A lancehead is so venomous that a human would die within an hour of being bitten. These vipers are responsible for more deaths than any other snake in North and South America. It may be best that this island stays off-limits to visitors.[5] 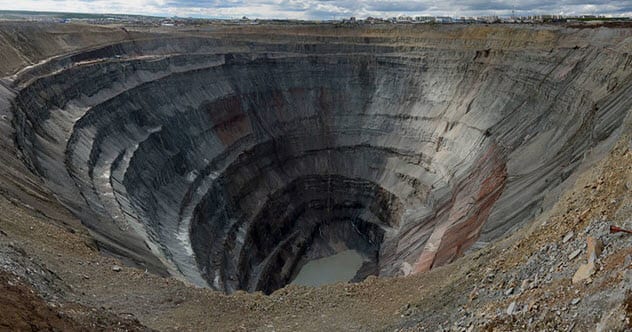 During the peak years, the mine produced more than 10 million carats of diamonds annually. Open mining ceased in 2001, but underground mining is continued at the location.

The airspace above the mine is off-limits to helicopters after stories emerged about aircraft being sucked in due to downward air flow. But those claims have never been proved. The town is strictly off-limits to outsiders, though, so don’t expect to get a glimpse of this diamond in the rough.[6] 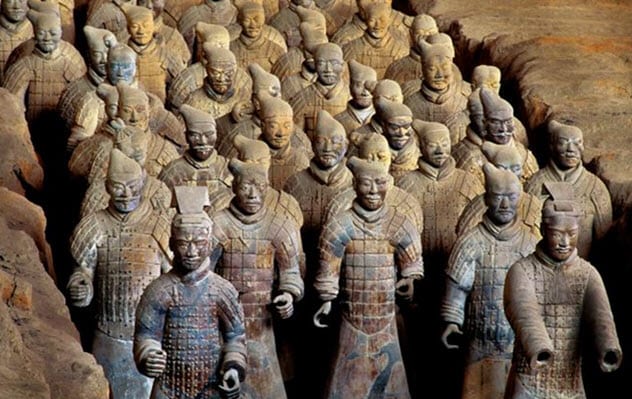 Deep in the hills of central China, the country’s first emperor has lain for more than two millennia. The secret tomb of Qin Shi Huang was discovered in 1974 after some farmers stumbled across it while digging wells. They dug out a life-size terra-cotta soldier, but they didn’t realize that it would be just one of thousands of pieces of history at the site.

Archaeologists have excavated the site for nearly four decades and have uncovered about 2,000 clay soldiers. Scientists have not yet touched the central tomb, though, which contains the remains of Qin Shi Huang.

Many believe that the tomb is filled with many other treasures such as precious stones. Chinese authorities are the only ones allowed near the area, and it is up to them to decide if anyone ever gets to enter the mysterious tomb.[7] 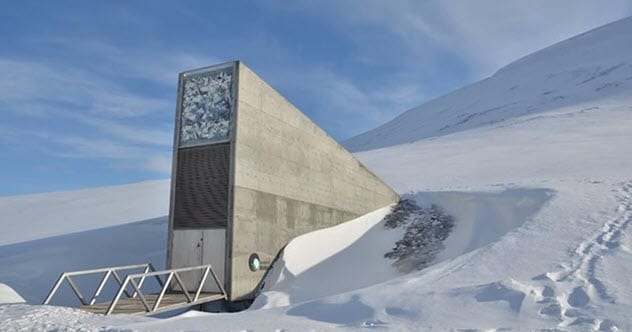 Halfway between Norway and the North Pole lies the Svalbard Global Seed Vault. It is tucked away deep inside a mountain on a remote island in Svalbard. It is the world’s largest seed storage and is home to crates of seeds for safe and secure long-term storage in cold and dry rock vaults. The vault holds tens of thousands of varieties of essential food crops and more than 4,000 plant species.

It is a long-term seed storage facility that was built to withstand the effects of man-made and natural disasters. The purpose of the vault is to store duplicates of seeds from the world’s crop collections. If nuclear war or global warming were to kill crops, nations could request seeds from the vault to restart their agricultural processes.

In 2018, the Norwegian government proposed to allocate 100 million NOK (roughly $12.7 million) to upgrade the seed vault to help safeguard the genetic material it contains.[8] 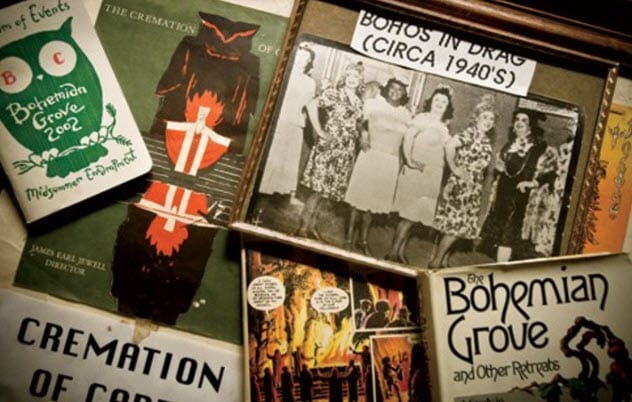 Each July, a group of very rich and powerful men gather at a 2,700-acre campground in Monte Rio, California, for two weeks to hold private meetings, indulge in alcoholic beverages, and who knows what else. Bohemian Grove is the name of the secret campground that belongs to the gentlemen’s club known as the Bohemian Club.

According to rumors, the only way to join the Bohemian Club is to be invited by members or join a waiting list decades long. There is also a $25,000 initiation fee along with yearly dues.[9]

There are currently around 2,500 members, with many of them showing up to enjoy their down time at the campground that features 118 camps, a man-made lake, and a towering Owl Shrine. Some of the past and present members of the secretive group include Gerald Ford, Clint Eastwood, Bing Crosby, Merv Griffin, Ronald Reagan, and George W. Bush. 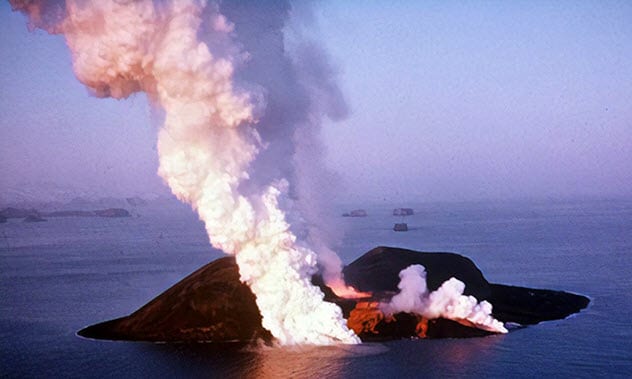 Surtsey is a volcanic island off the southern coast of Iceland. It’s one of the world’s newest islands and was named after the Norse fire god, Surtur. In 1963, it emerged from the Atlantic Ocean after a fiery eruption. Columns of ash were sent into the air almost 9,200 meters (30,000 ft). For nearly four years after the eruption, the volcanic core built up the island with elevations around 152 meters (500 ft).[10]

The island is now home to a long-term biological research program to study the colonization process of new land by plant and animal life. It was declared a nature reserve in 1965, and in 2008, UNESCO declared it a World Heritage Site. Surtsey is restricted to the public and is still only open to a handful of scientists who study the island.

“I’m just another bearded guy trying to write my way through life.” Visit my site at www.MDavidScott.com

Read about more forbidden places that you’re not allowed to visit on 10 Forbidden Places Where Outsiders Are Arrested (Or Worse) and Top 10 Places You Can’t Go.