During the Cold War, there were many attempts to design aircraft which could take off and land vertically. The Hawker Harrier is a well-known attempt that succeeded, but there were many others that failed. 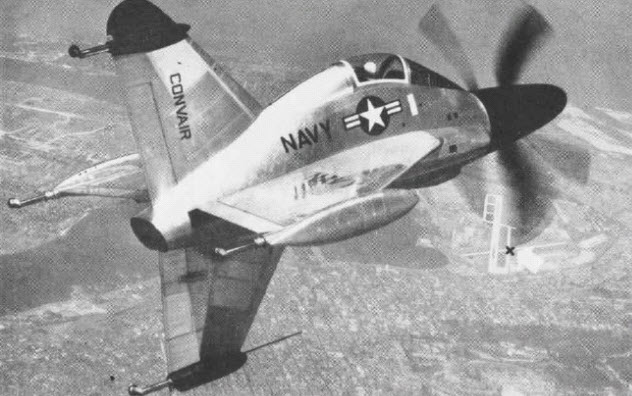 Project Hummingbird, a study on vertical takeoff and landing (VTOL) aircraft, was commissioned by the US Navy and Air Force. The aim was a versatile fighter which could take off and land from ships at sea and act as air defense for a fleet. Contracts were awarded to two companies to build one prototype each. The Convair Company’s XFY-1 Pogo proposal was one of the winners and proved to be the more successful of the pair.

It was a strange aircraft. The XFY-1 sat vertically on the ground as a “tail-sitter,” supported by the tips of its cruciform wings. The wings had small wheels attached. But the wheels had no brakes, so takeoffs and landings could only be conducted when there was no wind.

As it took off vertically but flew horizontally, the pilot’s seat rotated depending on its orientation. An escape system consisted of a length of rope to get the pilot down in an emergency landing. Takeoff and landing was dangerous because the pilot had to look over his shoulder to land.

The design showed that while VTOL aircraft were possible, there was still a lot of work to do. When the aircraft needed a major overhaul in 1956, the navy pulled the plug on the project. There was more interest in jet-powered carrier aircraft at that point, which were much faster than the propeller-driven aircraft of Project Hummingbird. 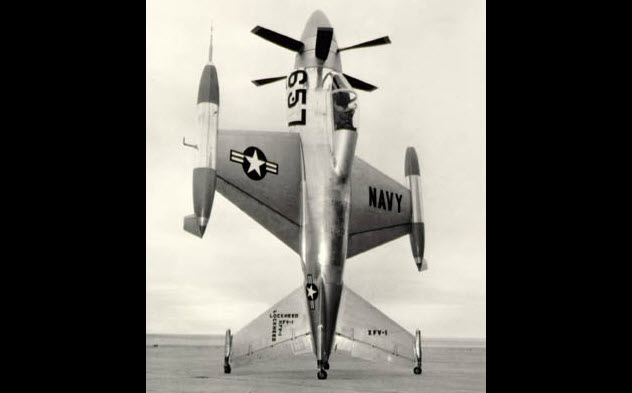 The other side of the coin in Project Hummingbird was the XFV-1, Lockheed’s attempt at a VTOL aircraft. Instead of using cruciform wings, the XFV-1 used an X-tail to support itself on the ground.

However, it never made a vertical takeoff or landing because the military gave the only working engine that could safely power this tail-sitter aircraft to Convair for their XFY-1 project. As Lockheed had to make do with a less powerful engine, the aircraft was limited to horizontal takeoff using jury-rigged landing gear.

With the proper engine, the aircraft could have worked. But by 1955, the navy was tired of the project because of advances in carrier-launched jet aircraft. The tail-sitter design was also difficult to land safely on a rolling ship at sea. The Lockheed project was canceled in 1955.

In the mid-1950s, the US Air Force realized that its existing airfields were extremely vulnerable to nuclear attack. It wanted an aircraft that could operate without a large infrastructure. At the same time, the US Navy ran out of money for research on the X-13 VTOL jet aircraft.

As the navy had extensively researched all aspects of a jet-powered VTOL, it was a perfect opportunity for the air force. Taking control of the X-13 project, the air force had two prototype X-13 Vertijets built for testing.

Flight testing began in 1955. A horizontal takeoff revealed glaring issues with control of the aircraft, although they were fixed on subsequent flights. The first vertical takeoff occurred in 1956. Tweaks to the aircraft were made, and a transition from vertical to horizontal flight happened the same year.

While both aircraft were extremely successful, the project wasn’t a military priority or even a military requirement. As a result, the aircraft failed to enter production. 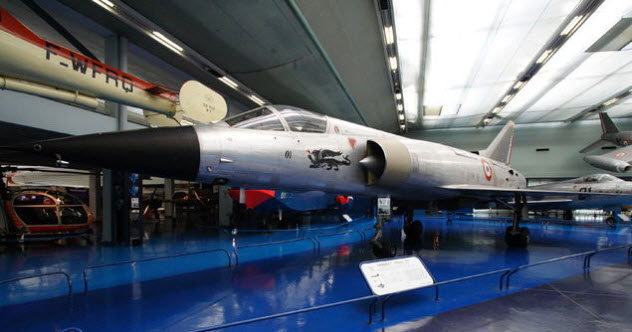 A NATO requirement for a supersonic fighter aircraft which could take off and land vertically prompted Dassault Aviation to adapt their highly successful Mirage III aircraft for the task. In 1961, the French government ordered a prototype, which Dassault built by reengineering the original Mirage III prototype.

The company added eight smaller jet engines into the fuselage for vertical lift. The drag and weight added by the smaller engines reduced the aircraft’s top speed below the speed of sound.

With nine engines, control was difficult. The prototype crashed in 1964 and again in 1965. The second time, a US Air Force pilot was killed. Although the aircraft successfully transitioned from vertical takeoff to horizontal flight in 1966, it was still extremely difficult to control.

A second prototype with a more powerful engine was the only VTOL aircraft to ever exceed twice the speed of sound, but it also crashed in 1966. The crash of the second aircraft prompted the French government to shelve the entire project.

The XV-5 Vertifan was part of a US Army project to build surveillance aircraft useful for battlefield reconnaissance. In an unusual move, aircraft engine manufacturer General Electric submitted the winning bid, but the construction of the airframe was subcontracted to Ryan Aeronautical.

The XV-5 was an unusual design, with lifting fans embedded in the wings and a smaller fan installed in the nose. Two jet engines provided horizontal thrust and also power to the lifting fans. As the lifting fans were driven entirely by air from the jet engines, the system proved remarkably resilient and low maintenance.

A prototype was built in 1964, with another less than one year later. However, in April 1965, one of the aircraft crashed while trying to shift from hover to horizontal flight. Another crash occurred in 1966. It was a bizarre incident because the pilot ejected and died while the aircraft itself landed safely. The second, surviving prototype was rebuilt into a larger aircraft, which operated until 1971. But it never advanced beyond the testing stage.

The Bell X-14 was a feasibility test of a special type of VTOL technology called thrust vectoring. The program was successful, with the aircraft flying from the 1950s until the 1980s when it was destroyed in a crash.

NASA modified the engines for greater thrust and then used the aircraft in various research programs until 1981, when it crashed. Neil Armstrong once flew it as practice for a lunar landing. 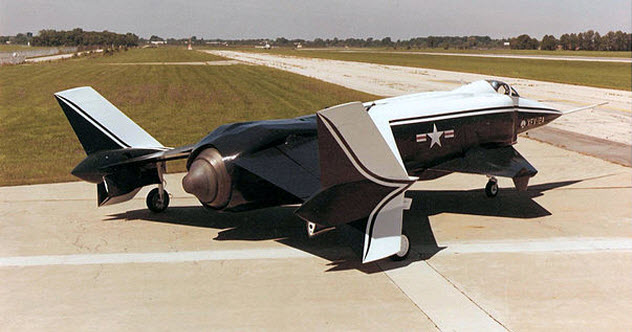 The XFV-12A was an attempt by the US Navy to develop a supersonic VTOL aircraft. This futuristic-looking fighter used a risky, unproven, and complex thrust system. In a cost-cutting attempt, the prototype included components from existing fighter aircraft. With a canard wing design, the aircraft had wings where the vertical thrust system was located.

The unique lift system was called “thrust augmenting.” Air from the jet engine was directed through a series of ducts and into the wings, where it would exit from openings under the wings to provide lift.

While tests of small-scale models were promising, real life was more disappointing when a high level of thrust augmentation was used. Large losses of thrust from movement of air through the ducts meant the aircraft couldn’t even lift itself off the ground when testing of the prototype started in 1974. The US Navy lost interest in the project and canceled it in 1981.

Although the Piaseki VZ-8 Airgeep was built by the US Army as a prototype “flying jeep,” it didn’t look anything like a jeep. Instead, it looked like an open cockpit helicopter. Built in 1958, the aircraft consisted of two 400-horsepower engines driving two ducted fan propellers, one at the front of the vehicle and one at the back.

There was room for an open cockpit in the space between the two propellers. It was steered by varying the thrust of each propeller. But the contraption didn’t look maneuverable or safe. There were two prototypes, the second one with a fuselage slightly bent to reduce aerodynamic drag.

Surprisingly, the VZ-8 Airgeep was both maneuverable and easy to pilot. But it was too vulnerable, despite proving to be a stable and effective platform for weapons. The army eventually lost interest in “flying jeeps” and favored conventional attack helicopters instead.

A French design from the mid-1950s, the SNECMA Coleoptere was an attempt to build a VTOL aircraft that could travel faster than the speed of sound. In this case, the trick was a doughnut-shaped wing wrapped around the entire aircraft, which could be used as a ramjet in theory.

Tests got off to a rough start with a smaller prototype due to vibrations when taking off vertically. But when a larger, piloted model was tested, the vibrations vanished after takeoff. However, other problems plagued the aircraft during tests, including a tendency to spin slowly when hovering and difficulty landing the aircraft with precision.

During the aircraft’s ninth flight, it briefly achieved horizontal flight but only because the pilot lost control of the aircraft. It crashed after tumbling wildly through the air. Further attempts with the concept were abandoned.

The VZ-9V Avrocar was an attempt by the US military to design a bona fide flying saucer. They hoped the saucer shape would have stealth characteristics, be able to fly at heights up to 25,000 meters (80,000 ft), and have a top speed of 3,700 kilometers per hour (2,300 mph).

It was a tall order. The VZ-9V, a subsonic prototype, was built as a proof of concept. With a fan in the center of the aircraft and two cockpits on either side, it looked just like a UFO.

The design rapidly ran into trouble during test flights when it was difficult to control. A US Air Force evaluation indicated that several changes needed to be made before the aircraft could actually fly. By the time the changes had been made, the US had given up on the entire project, and the program was scrapped.