Trains have gone through an evolutionary process in which the better designs have succeeded while the less useful ones have faded into obscurity. Yet many of the most unusual trains had features that made them so unique that some people might be surprised that they are no longer in use today.

Built in the 1960s, the M-497 (aka the “Black Beetle”) was an experimental train powered by jet engines. Its construction was sponsored by New York Central Railroad, which wanted to make fast trains to lure back commuters who had abandoned its slower trains for other means of transportation.

The Black Beetle was a regular passenger train that was modified to run on jet engines from a B-36 bomber. It underwent a series of tests, ultimately reaching a record speed of 295 kilometers per hours (185 mph). This world record remained unbroken for 40 years.

However, the New York Central Railroad stopped development of the vehicle because jet-powered trains were too expensive to build and maintain. The carriage was returned to service, and the jet engines were used to make the world’s first snowplow for railroad tracks. 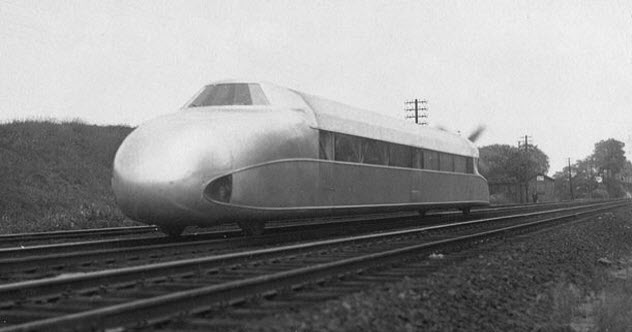 The Schienenzeppelin was a 1931 German attempt to build a super-fast train. The experimental train was powered by an airplane engine connected to a huge propeller in the back. Streamlined and lightweight, this train reached a record speed of 225 kilometers per hour (140 mph) during tests. This record remained unbroken for 23 years.

The Schienenzeppelin never went past the prototype stage because of fears that its propellers could seriously injure or even kill people who stood close to the tracks at train stations. The position of the propellers prevented the train from reversing direction, pulling other coaches, or maintaining the momentum to climb hills.

There were also doubts as to whether the railroad tracks of the day could cope with the stress of this train. The Schienenzeppelin was destroyed during World War II when Germany stripped its aluminum to build airplanes.

The Bennie Railplane was invented by George Bennie in 1930. To replace coal-powered steam engines, the train ran on special tracks that Bennie planned to build above regular railroad tracks. The train looked similar to more modern cable cars except for its two propellers that were powered by an engine. Wheels on top of the train allowed it to move along its overhead tracks.

Bennie claimed that the railplane could reach speeds of up to 190 kilometers per hour (120 mph). However, its experimental track was too short to attain such a high speed.

Bennie couldn’t find investors for his train because people were recovering from the Great Depression and World War II was just around the corner. In 1957, Bennie sold his experimental rail track at a fire-sale price. Bankrupt, he died one year later. 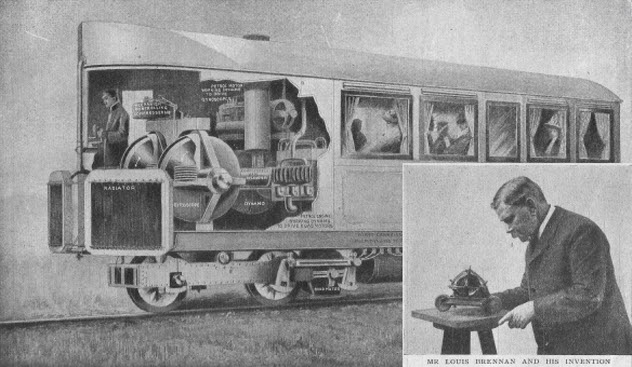 Powered by electricity, the Brennan monorail was invented by Louis Brennan in the early 20th century. We might call it the motorcycle of the train world because it had a single set of wheels and ran on a single track.

It did not tip over even when it stopped. Two gyroscopes stabilized the train to such a degree that the train would probably remain upright and continue moving on the ground if it derailed.

In fact, Brennan invented the monorail to replace regular trains that often derailed whenever they tried to take curves at high speed. But that’s true only if the gyroscopes worked correctly.

Unfortunately for Brennan, his monorail never replaced regular trains because the failure of even one gyroscope would cause the train to derail and crash violently. In addition, the train was not cost-effective because it could not pull other coaches. 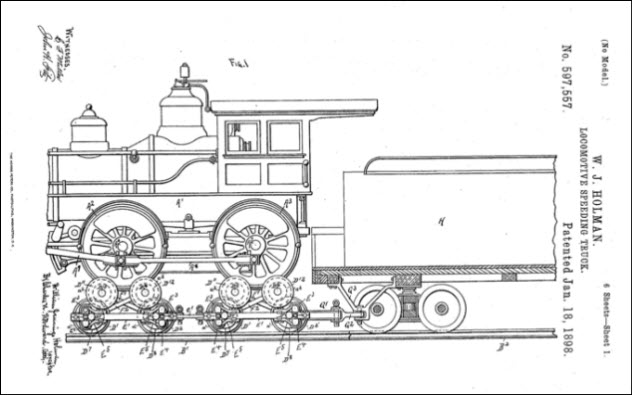 The wheels served no practical purpose, but its inventors claimed that they made the train run faster. The fraudulent scheme was so sophisticated that the train had its own patent and ran experimental trips. The Holman Locomotive Speed Truck Company, also a fraud, was formed to oversee the train’s development.

The company attempted to raise $10 million by selling fake shares of stock at $25 per share. Many people fell for the swindle and lost their hard-earned money when the inventors disappeared. 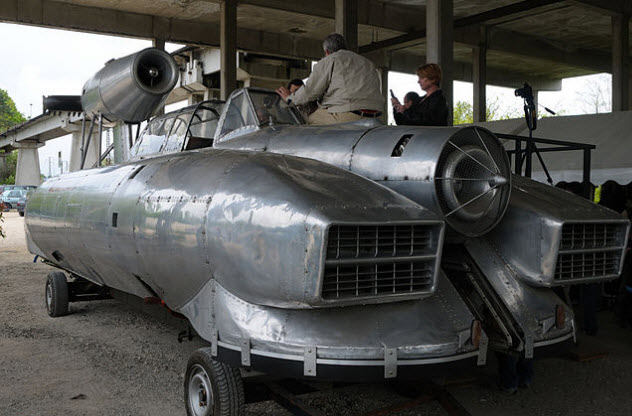 In the 1960s, Jean Bertin’s Aerotrain was the hovercraft of the train world. Funded by the French government to replace conventional trains, the Aerotrain moved by creating a cushion of air over a concrete monorail.

The train was comfortable, light, quiet, and fast. Its prototype reached speeds of 420 kilometers per hour (260 mph). Its tracks were cheap and easy to construct. Best of all, they did not need as much precision and maintenance as regular tracks.

About 20 countries expressed interest in the promising train. Bertin boasted that it would be available for worldwide use by the year 2000. However, after Bertin turned his completed train over to the French government, they canceled future development in 1974 because of fears that the train would kill the state-sponsored railway system. Devastated by the government’s decision, Bertin died one year later. 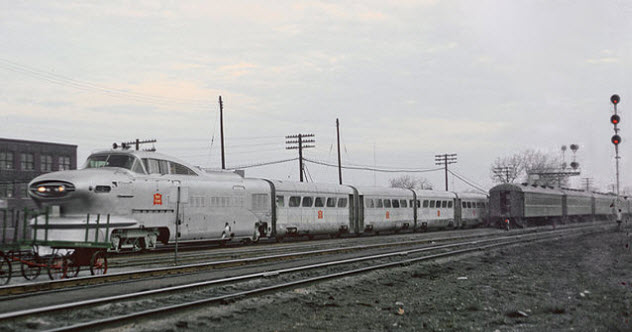 The General Motors Aerotrain was made by the auto company in the 1950s. It was sponsored by several railway operators who wanted a faster train to win back former customers who had switched to other means of transportation.

The Aerotrain was nothing new. General Motors simply joined several of their buses and put them on a train chassis. Nevertheless, the Aerotrain was light and fast, with less than half the weight of regular steam trains when fully loaded.

General Motors made two prototypes which they gave to several railway operators to test. All the operators complained about the train’s engines, which were so underpowered that they couldn’t reach their maximum speed or climb uphill. In addition, the train was so light that passengers compared the experience to the rough ride of a truck. 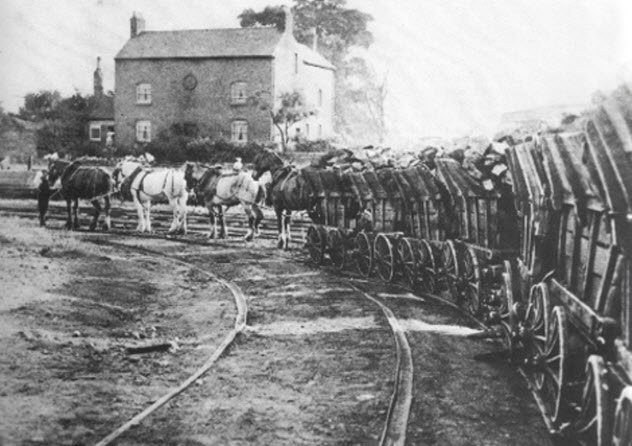 Horse-drawn carts were the first trains, predating the steam-powered variety by about 200 years. Horse-drawn trains were first used on wooden tracks to transport coal away from coal mines. Similar tracks were soon built to link neighboring towns, and the vehicles began transporting people as well as goods. The trains moved as slow as 10 kilometers per hour (6 mph), yet they were more reliable and comfortable than horse-drawn carriages on bumpy roads.

The first tracks were one-way, with the laws of the day giving the right of way to trains carrying goods. People on passenger trains were required to carry their train away from the tracks whenever they encountered a goods train coming from the opposite direction.

The invention of steam-powered trains eventually made horse-drawn trains obsolete, although both initially competed for the tracks. Some railway operators even switched back to horse-drawn trains temporarily because the first steam engines were unreliable and prone to explosion. Horse-drawn trains remained in use until at least the end of the 19th century.

The Michelin railcar is what you would expect if a passenger train mated with a passenger lorry. The train was inspired by none other than famous tire manufacturer Andre Michelin, who instructed his engineers to come up with something to replace the noisy steel wheels of regular trains.

Not surprisingly, his engineers designed a train with wheels that were covered with rubber tires. They had special features to stop the train from derailing if they burst in motion. The train looked and operated so much like a regular bus that it could be driven without training by anyone capable of driving a bus.

The Michelin railcar was tested on railway tracks in France and the UK but was never adopted by either country because the trains were too expensive. For instance, the Michelin railcar required 10 tires, but a regular train had only four wheels. The tires also wore out quickly and needed to be replaced often. 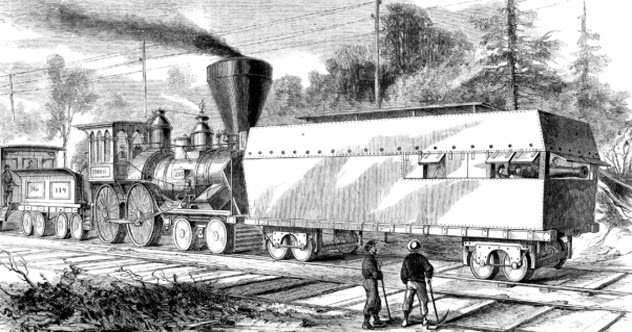 Armored trains were first used for military purposes during the US Civil War when Union General Joseph Hooker transported over 20,000 soldiers on them. Initially, the trains were covered with defensive armor to protect the soldiers from ambush. However, the vehicles soon began sporting heavier armor and weapons, such as cannons, antiaircraft guns, and machine guns.

Enemy infantry and tanks were usually no match for armored trains. But the trains were soft targets for enemy airplanes that could easily spot and destroy them from the skies. Their tracks were also vulnerable to sabotage by just one person.

After World War II, armored trains were replaced by more advanced war vehicles. Even so, there are reports that the Russian military is planning to return armored trains to battle against homegrown militants who often attack the Russian railway system.