There are many common microorganisms that sometimes make their way into the local and national news. These may include microorganisms that cause food poisoning, fever, pneumonia, and more. However, these common pathogens, usually residing unnoticed on the different parts of our body, can actually turn against us and begin eating our flesh! This ranges from killing surrounding tissues to actually ingesting flesh and brain matter. 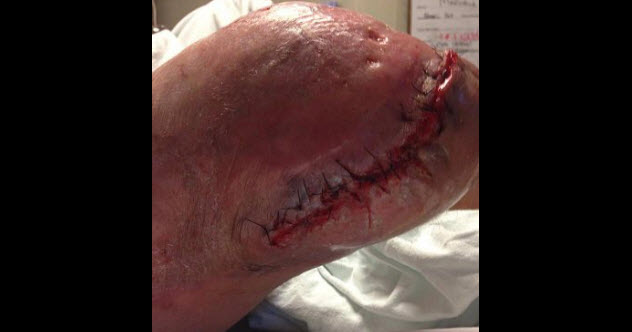 Streptococcus pyogenes, also known as group A streptococcus (GAS), is a normal flora of the human body. Under ordinary circumstances, it resides on our skin and other parts of the body. Since it is naturally pathogenic, it can sometimes cause diseases such as strep throat and scarlet fever.

If left untreated, it can eat away large parts of the body and cause death. Unfortunately, a newly discovered strain of S. pyogenes called emm89 is becoming prevalent and is a potent, causative agent of necrotizing fasciitis.

It is important to know that flesh-eating disease is only common to those with immunocompromised bodies, such as diabetics. 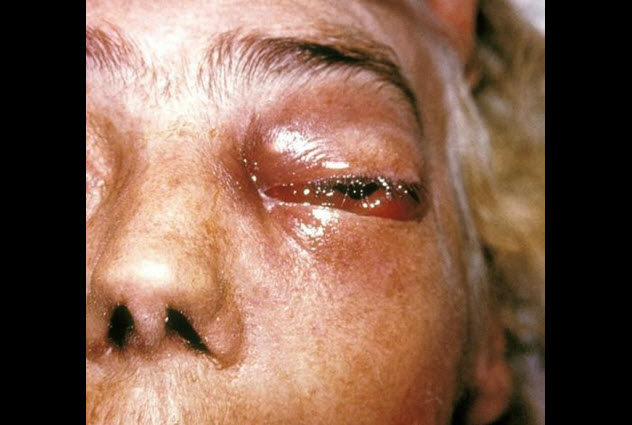 Soil harbors an extreme number of microorganisms, including a fungus called Apophysomyces. Although infection from this fungus is quite rare, it can still cause a flesh-eating disease called mucormycosis.

Mucormycosis is not unique to Apophysomyces. Other fungi belonging to the order Mucorales, such as Mucor and Rhizopus, can also cause it. To be pathogenic, it must be delivered deep into the flesh.

One unfortunate incident with this disease occurred when a tornado hit Joplin, Missouri, in 2011. Thirteen injured survivors soon found themselves infected by the fungus. As the fungus grew, it invaded nearby tissues using its mycelia, damaging blood vessels and restricting blood flow.

Starved of blood and nutrients, the tissue began to die. As scientists discovered, the sheer force of the tornado delivered the fungus from the soil to deep inside the wounds of the victims in an unusual and extremely unlucky event. 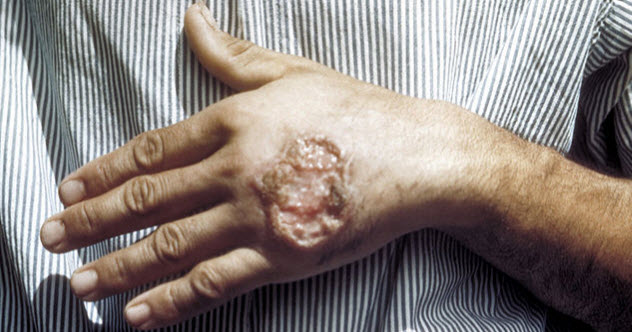 Even a normal fly bite can progress to a flesh-eating disease in certain circumstances. Leishmania is a parasite common in the tropics and subtropics, including countries in southern Europe. Its life cycle needs both a human and a sand fly host.

After living in a sand fly and maturing to a certain degree, Leishmania is transferred to the human body through a fly bite. The parasite then matures more in the human body and invades nearby cells. The affected cells burst and die after serving as residences for the parasite.

Flesh eating almost always happens around the bite and can enlarge significantly if left untreated. On rare occasions, the parasite can become systemic, migrate to other parts of the body, and begin to eat them, too.

There are two types of leishmaniasis: cutaneous and visceral. The former type manifests as raw, erupted skin, while the latter affects the internal organs. Right now, war-torn Syria is experiencing an outbreak of leishmaniasis. Travelers to the Amazon and Africa are also susceptible to this infection. 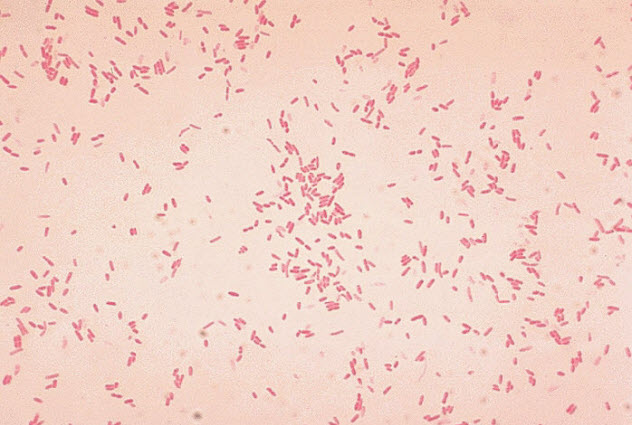 Aeromonas hydrophila is common in fresh and brackish waters, such as estuaries. It can also contaminate drinking water when purifying equipment malfunctions or is suboptimal. Travelers are usually infected by this bacterium, which manifests as diarrhea (aka traveler’s diarrhea).

The bacterium can also contaminate food products when water used to clean the facilities or products is contaminated. Since Aeromonas hydrophila is resistant to cold temperatures, storing the contaminated foods in the refrigerator may not effectively eliminate the contamination and may later affect people who eat the products.

Though it is rare, a person can be infected by this bacterium and experience flesh-eating disease when wounded parts of the body come in contact with contaminated water, as in the case of a woman from Georgia in 2012. The bacterium entered her body through a wound acquired from a zip line accident.

Amputation and removal of some affected internal organs are common treatment options to stop the spread of the disease. So try not to dip in the water if you have open wounds. 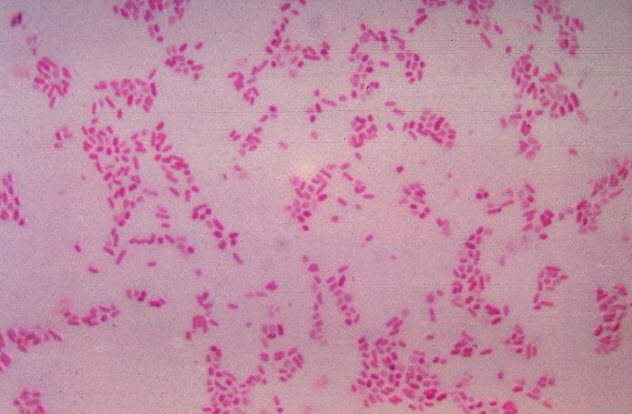 Bacteroides fragilis thrives in the oxygen-deprived environment of the human gut, especially in the colon. It is a normal resident of our body and actually aids in digestion. This bacterium also prevents the invasion of other pathogenic microbes by competing for space and nutrients. Since the bacterium is well-adapted to the gut environment, foreign and invading microbes are at a disadvantage most of the time.

Ironically, when this commonly friendly bacterium leaves the gut, usually during surgery or a traumatic accident, it can cause severe necrotizing (flesh-eating) infections. These infections are usually characterized by excessive puss and edema in the surrounding tissues.

Unfortunately, treatment of a B. fragilis infection is moderately cumbersome. The bacterium is capable of destroying penicillins and its relatives by producing enzymes that break down the antibiotic. Usually, higher forms of antibiotics, such as carbapenems, are needed. However, frequent use of these higher-generation antibiotics may also lead to increased antibiotic resistance. 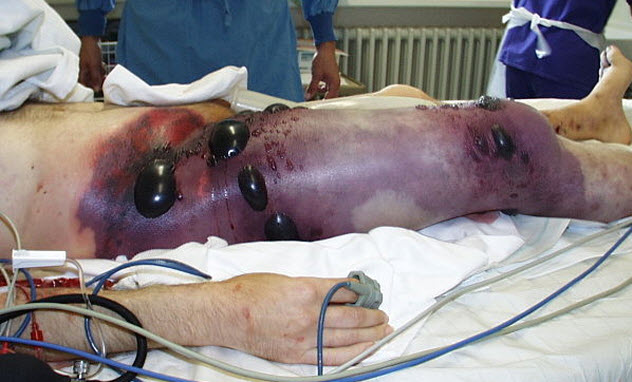 Clostridium perfringes, a cousin to the Clostridium botulinum bacterium that causes botulism, is another common pathogenic species of the Clostridium genera. It is commonly found in soil and the human gut. It is also common in raw meat and poultry products.

When these products are eaten uncooked, the bacterium may cause food poisoning. In extreme cases, C. perfringes can cause necrotizing fasciitis, just like Streptococcus pyogenes, Aeromonas hydrophila, and Bacteroides fragilis.

Clostridium perfringes may eat the surface of the skin or the deeper parts of the muscle, usually leading to amputation. In addition, C. perfringes may cause gas gangrene.

Gas gangrene is a serious infection and involves the muscle instead of just the skin. It is characterized by gas production on the dying muscle tissues. Usually, infection by this bacterium happens when a wound comes in contact with contaminated soil.

This scenario is common in the battlefield, where wounds may be left open and exposed to dirt. Common treatment options are skin grafting and amputation. 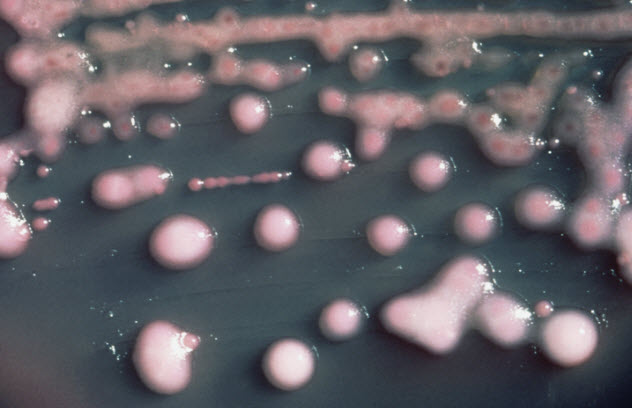 Klebsiella pneumoniae is considered a normal resident of the human body, usually in the gut and in the nasopharynx areas. Considered to be one of the most antibiotic-resistant microorganisms, Klebsiella pneumoniae is associated with numerous diseases, such as pneumonia, bloodstream infections, and meningitis. Infection by this pathogen is common in hospital settings, where the bacterium resides in catheters and breathing apparatus.

On rare occasions, Klebsiella pneumoniae may cause flesh-eating disease. The first case in North America was documented in an article published in the Western Journal of Emerging Diseases. An elderly Filipino woman living in California presented with muscle necrosis caused by K. pneumoniae. According to the paper, such cases are normally found in southern Asia where the bacterium is prevalent.

Infections from Klebsiella pneumoniae are particularly hard to treat because they are resistant to a wide variety of antibiotics. In fact, it is well-known that K. pneumoniae is resistant to all penicillins and increasingly resistant to higher generations of drugs as well. 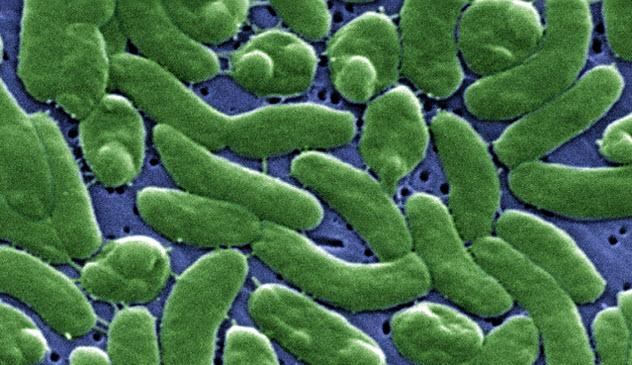 Vibrio species are usually found in marine environments because they require salty water for growth. Both Vibrio cholerae, which causes cholera, and Vibrio vulnificus are members of this genus.

Vibrio vulnificus is usually contracted from marine foods, such as crabs, and may cause diarrhea and vomiting when the bacteria is ingested. On rare occasions, susceptible individuals may also develop liver disease. When open wounds are exposed to seawater contaminated with V. vulnificus, necrotizing infections may occur.

Infection is most common in May and October. To prevent necrotizing fasciitis caused by Vibrio vulnificus, it is better to keep open wounds away from saltwater environments, especially during the warm season when the bacterium is prevalent.

Staphylococcus aureus (aka Staph) is a common pathogen that may reside transiently on the human skin and other parts of the body. According to the CDC, 30 percent of the global population carries the bacterium in their nasal region. In most cases, they are nonpathogenic events.

Staph is associated with bloodstream infections and infection of the heart valves (aka endocarditis) when introduced to the bloodstream via open wounds or surgical operations. When ingested, it may cause food poisoning when the bacterium releases toxins. Cooking may effectively kill it, but the toxins remain undamaged.

In extreme cases, Staphylococcus aureus may cause necrotizing fasciitis. This is common with patients who have underlying illnesses such as diabetes and hypertension. With impaired immune defenses, the bacterium can easily invade and kill body tissues. Treatment of these infections may be difficult because many of these cases are caused by methicillin-resistant Staphylococcus aureus (MRSA), which is tolerant to many available antibiotics.

Upon entering the nose, the amoeba travels through the olfactory nerves until it reaches the brain, where it feeds. Although its usual diet includes bacteria, that particular type of food is severely lacking in our brains. So Naegleria fowleri switches to actually eating our brains instead.

Although natural bodies of water are common sources of this amoeba, contaminated pools or tap water may also harbor this zombie pathogen. It is important to know that contaminated water must pass through the nose for infection to occur. Infection cannot happen if the amoeba is ingested through the mouth or any other body openings.

Infection by Naegleria fowleri is rare but almost always leads to death when it occurs. Currently, there is no standard drug used to treat this type of infection, which usually requires surgery as a last resort. To avoid infection by this brain-eating amoeba, avoid untreated and warm freshwater environments. Properly chlorinated pool and tap water is generally safe.

Matthew is a premedical student majoring in microbiology.