Now that we’ve all had time to digest the latest in the Star Wars series and compare it to both the original trilogy and the prequels, we’re kind of realizing that there’s really nothing new about The Force Awakens—it just recycles old Star Wars content. The first Star Wars trilogy suddenly seems very original. And with the new and untried territory that was the very first Star Wars production came a series of bizarre tales.

Darth Vaders Voice Before Voice Over

During the filming of the original Star Wars, Darth Vader didn’t have the grating, deep voice we’ve all come to identify with the character but instead sounded West Country English, which makes it difficult to picture him as evil if you watch some unedited footage. That was what David Prowse—the actor playing Darth Vader under the mask—actually sounded like. Of course, George Lucas was never actually going to keep Prowse’s voice as that of Darth Vader. That would have turned Star Wars into a comedy. Carrie Fisher even referred to him as “Darth Farmer” on set.

Prowse did not end up benefiting much from Star Wars financially because he took a cash payment instead of a royalty option. These days, he makes his living appearing at Star Wars conventions—except at the official one, from which he is banned due to a falling-out with Lucas.

Tarkin in Star Wars: Episode IV was a fearsome character to whom even Darth Vader showed deference, but the actor who played him, Peter Cushing, was gentle and charming. Carrie Fisher, who played Princess Leia, struggled to act around him on set. That might have also been because he looked ridiculous wearing slippers on set while filming.

Yes, Grand Moff Tarkin destroyed Alderaan while wearing carpet slippers, not boots. The riding boots Peter Cushing received to complete his costume didn’t fit, so he begged Lucas to be allowed to wear slippers on set. Lucas let him.

As a result, nowhere in old Star Wars footage is there a full-body shot of Peter Cushing wearing a complete imperial uniform. Because of the slippers, the only shots that exist of him are from the ankle up. With Tarkin set to be digitally recreated for the new Star Wars movie Rogue One, this is causing all sorts of headaches. 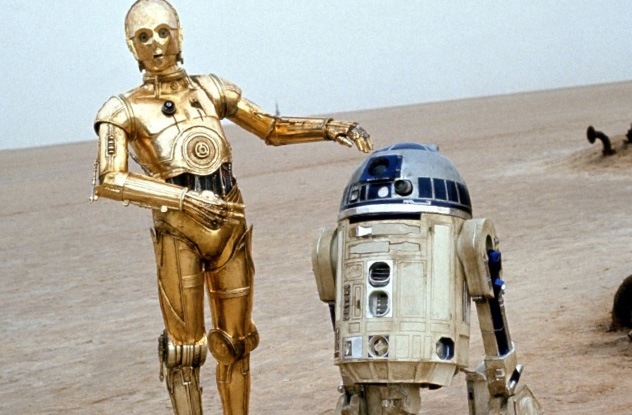 Despite its dumpy, rounded appearance, R2-D2 had an actor inside it. And the R2-D2 actor, Kenneth Baker, hated the guy who played C-3PO, Anthony Daniels. Baker claimed that Daniels was both boring and rude, never socializing with the rest of the cast and once blowing off Baker. It didn’t help that the way they prepared for filming every day left little time for chatter between the two characters.

While their on-screen characters bickered liked an old married couple, the two actors grew to resent each other. Daniels, unlike his chipper C-3PO character, was something of an introvert. Daniels also saw Baker as just “a bucket” who was never too involved with Star Wars filming as Baker never said anything on-screen. He even compared Baker to a good luck charm at one time, something minor that Star Wars kept in its metaphorical pocket. 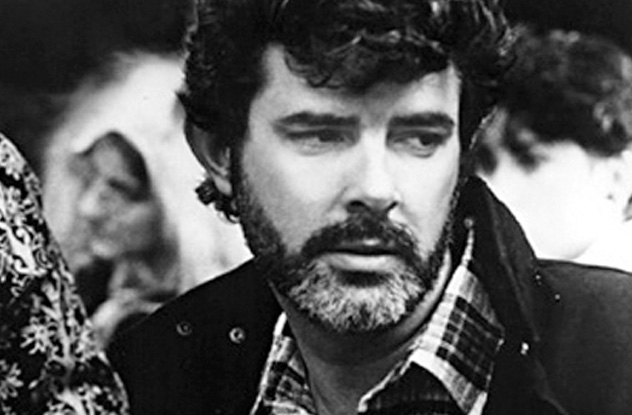 When Disney purchased Lucasfilm in 2012, $4 billion went into George Lucas’s pockets. But how did Lucas gain control of the Star Wars franchise and build it up? And why didn’t any Hollywood executives or other media companies get a cut of the money?

The story starts with two of Lucas’s films he directed before Star Wars: THX 1138 and American Graffiti. Having had a series of run-ins with incompetent and overbearing Hollywood executives while directing both of those films, Lucas decided he’d had enough of Hollywood and started his own studio company, Lucasfilm.

By the time he started filming Star Wars, he was a respected director. Executives at 20th Century Fox worried that Lucas would ask for the unprecedented sum of $1 million to direct Star Wars, but Lucas instead hammered out a deal with Hollywood where he would take only slightly over $100,000, while gaining exclusive rights to license Star Wars merchandise. This was a new idea at the time because back then, there weren’t really concerted marketing efforts or merchandise tie-ins for movies. Lucas also gained executive control to direct any sequels as he saw fit. This was what made Lucas very wealthy—not the movies themselves.

One the most famous Star Wars lines, “I am your father,” is probably the greatest twist in the history of modern film. The sinister, evil, masked Darth Vader being the father of Luke Skywalker? Who would have thought it? Part of the reason no one leaked the secret before The Empire Strikes Back hit the box office was that Darth Vader never actually said that line during filming—it was secretly dubbed in during postproduction. What Darth Vader actually said during filming was “Obi-Wan killed your father.”

However, Mark Hamill’s reaction in the scene is real because Hamill had been told just moments before filming the scene of what the actual line was. Hamill was the only other person to know the secret besides the producers and director. After filming, he was pulled aside and sternly told that if the secret was leaked, they would know it was he who had done it. The secret stayed safe with him until the film came out.

5Lucas Fought Tooth And Nail For The Unique Opening Sequence

The classic Star Wars opening sequence, another icon of the series, almost didn’t happen. First of all, the sequence itself was difficult to do with technology of the 1970s and required a lot of complex equipment to create a computerized film camera to physically film the opening sequence of text. The second problem was the Directors Guild of America.

Lucas thought traditional opening credits that start films are stupid and ruin the movie. The Director’s Guild of America, which Lucas was a part of, disapproved. When The Empire Strikes Back came out, the Guild wanted Lucas punished with a $1,000 fine and the film withdrawn from theaters until an opening credit sequence was inserted in. Lucas, enraged at this, sued the Director’s Guild, but when the Guild countersued, he decided to pay the fine and then resign from the Guild.

All future Star Wars films would have the “classic” opening sequence, and Lucas selected a British director for the third and final Star Wars film, one not part of the American Director’s Guild.

It’s now hard to imagine anyone but Harrison Ford as Han Solo, the dashing galactic smuggler. But not only did Ford have to beat out several other actors for the role, including the likes of Sylvester Stallone and Al Pacino, but he also had to contend with George Lucas himself, who initially didn’t want Ford playing Han Solo at all.

Lucas didn’t want to cast anyone who had appeared in his earlier hit film American Graffiti, including Ford. However, casting director Fred Roos deliberately hired Ford for a job that would have him hanging around the set of Star Wars so that Lucas might change his mind. Ford was eventually hired by Lucas to aid in the audition of other actors wanting the part of Han Solo, with the expectation that he would not get to play Han. But after several excellent auditions, Han finally got the part, partly because he could act mean or funny depending on the situation.

3Alec Guinness Hated The Film But Earned Millions From It 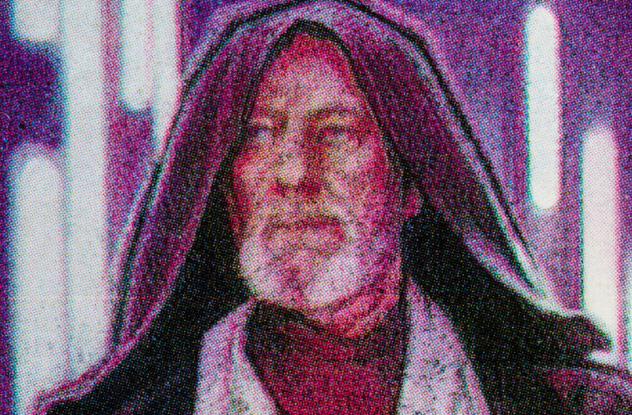 Alec Guinness, who played Obi-Wan, wrote letters to a friend during filming, lambasting the movie as “fairytale rubbish” and noting he had to “work with a dwarf.” Other complaints were that the other members of the cast treated him like an old man and the dialogue was rubbish. Guinness did, however, think the food provided was good. He later warmed slightly when he first saw the completed film, regarding it as a spectacle and “technically brilliant.”

While Guinness may have held a low opinion of the film itself, he craftily negotiated for royalties of 2.25 percent of total profit from the franchise, which would earn him tens of millions of dollars, unlike some of the other actors who took lump sum payments. Included was a clause where he had to do only minimal public appearances. The royalties could have been higher by 0.25 percent, but since Guinness never got the agreement in writing from George Lucas, the producers claimed Lucas had said 2.25 percent instead of 2.5 percent, which screwed Guinness out of millions dollars more.

The dogfights between rebel X-wings and Imperial TIE fighters were dramatic and game-changing scenes when the movie first came out. Lucas had been inspired to make them because he wanted a dramatic dogfight in space between two spacecraft, specifically one different from the space fight scenes in Star Trek. When the first postproduction version of the film came back with terrible special effects, Lucas was unhappy. He fired the old editors and brought in new ones to turn his vision into reality.

The editors spent hundreds of hours combing through any dogfight footage they could get their hands on, including World War II propaganda reels and war movies with dogfighting scenes. Then they used those films, along with Lucas’s instructions, as guides for scenes they were to create. Lucas also used some spliced real-life dogfight footage for an early, rough cut of the movie. When he invited some of his friends over to see it, the movie was confusing because it would rapidly transition from Star Wars to war movies like The Bridges at Toko-Ri. This caused his friends to think the movie was confusing, but when the special effects were finished, the results were amazing.

1Steven Spielberg Has Earned Millions Of Dollars From Star Wars 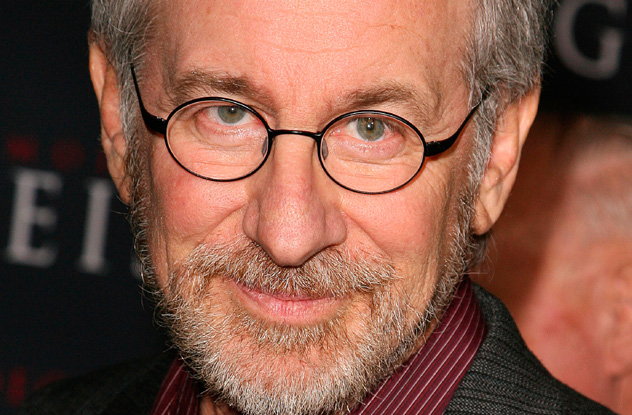 Back in the 1970s, science fiction films weren’t as popular as today. Into this environment stepped George Lucas with Star Wars, which not many Hollywood studios were actually too keen on. The filming was troubled. During a break in filming, George Lucas visited his friend Steven Spielberg, who was at that time filming Close Encounters of the Third Kind. This turned out to be a bad idea for Lucas’s mental health, because Lucas was so impressed by Close Encounters that he thought his Star Wars would pale in comparison.

Lucas, somewhat desperate, made a deal with Spielberg—each would give 2.5 percent of the profit of his film to the other. Spielberg, gambling, took the trade, and hit it big time when Star Wars went on to become one of the biggest box office hits of all time. It’s estimated that Spielberg has made more than $40 million from Star Wars and continues to make money from the franchise.