We have finally arrived at the end of the Skywalker saga. All nine movies were wrapped up with a neat little bow when Star Wars: The Rise of Skywalker was released in cinemas around the world in December 2019.

Now that the saga is over (or at least the numbered films), let’s look back at some of the fun and cool ideas that didn’t quite make it into The Force Awakens, The Last Jedi, or The Rise of Skywalker. Here are the top 10 unused Star Wars sequel trilogy ideas. 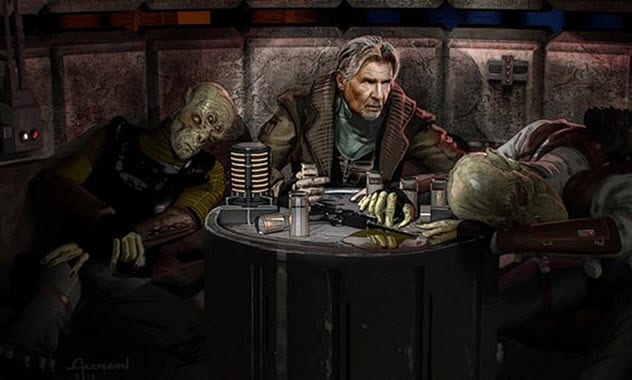 While Han Solo is undoubtedly the most lovable scoundrel in the galaxy, his introduction in The Force Awakens would have been drastically different in this story line. Rather than going back to the life of a smuggler after separating with Leia (due to their son’s fall to the dark side of the Force), Han would have turned to the bottle instead.

A piece of concept art shared on Lucasfilm artist Christian Alzmann’s Instagram page shows Solo drinking his problems away in some seedy establishment by outlasting every exotic patron around.[1]

Although this could have been a fun idea and a nice bit of character development for Han, it would have been a little too heavy and “real” for what is essentially a fun and upbeat movie. 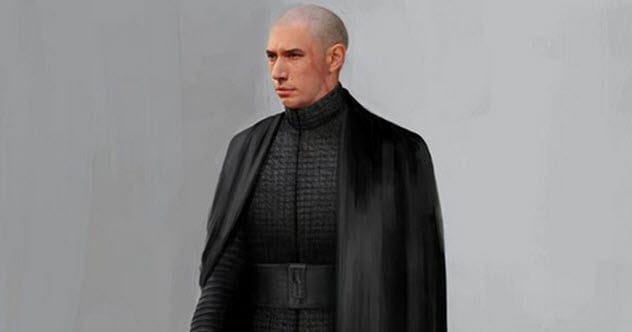 The Last Jedi was a real roller coaster of a movie. Although it divided the Star Wars fan base, it can’t be denied that director Rian Johnson made some bold decisions as to the direction of the film and its characters.

Speaking of bold . . . early concept art for the highly volatile Kylo Ren depicts him as being completely bald. Johnson wanted Kylo to have a duality to his character—part good, part bad. The harsh, bald look would have contrasted with his sleeker and smoother outfit.

In the end, it was decided that the dreamiest bad guy in all of Star Wars did need that luscious head of hair. The egghead look would have been too much of a departure from the character we knew in The Force Awakens.[2]

8 The Alternate Opening Shot Of The Last Jedi 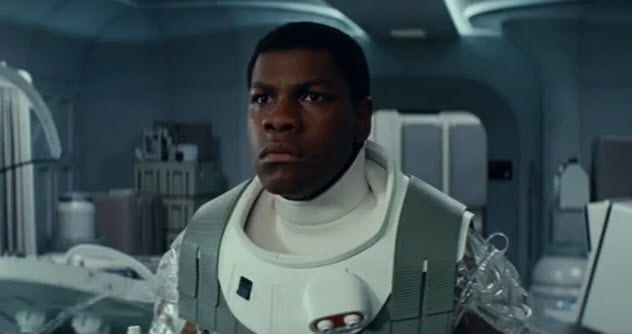 Star Wars movies (at least the numbered ones) traditionally start off with the crawl that pans down—and, on one occasion, up—to reveal a planet. While The Last Jedi follows suit, the film was originally meant to begin in a somewhat different way.

The crawl would happen and fade away into the depths of space. Then the camera would pan down to reveal a planet . . . but wait . . . it’s not a planet. The audience’s expectations are subverted, and it is revealed that this “planet” is the domed top of the medical capsule where Finn is recovering after he sustained injuries in the previous movie.

This interesting idea was filmed and even included in the deleted scenes on the home release. But it didn’t make the final cut. Instead, The Last Jedi gets off to a more action-packed start with the Resistance’s evacuation of their base and the First Order attack.[3]

7 Rey Was Going To Be Called Keera 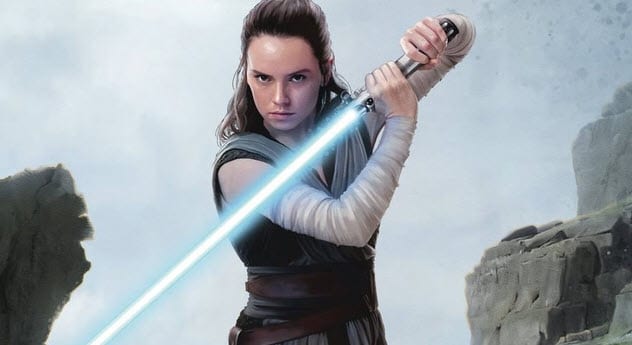 When J.J. Abrams first got the ball rolling on what would become The Force Awakens, he only knew that he wanted a female lead. But according to Daisy Ridley, who played this Star Wars heroine, the undefined character did have a name attached to her: Keera (or Kira, depending on whom you ask).

The name seemed to be an almost sure thing. However, when filming for Episode VII began in the Abu Dhabi desert in 2014, Abrams changed the character’s name at the last minute to Rey.[4]

The name Keera wasn’t completely abandoned, though. It was repurposed and changed to the slightly more exotic-looking Qi’ra for Emilia Clarke’s character in Solo: A Star Wars Story. 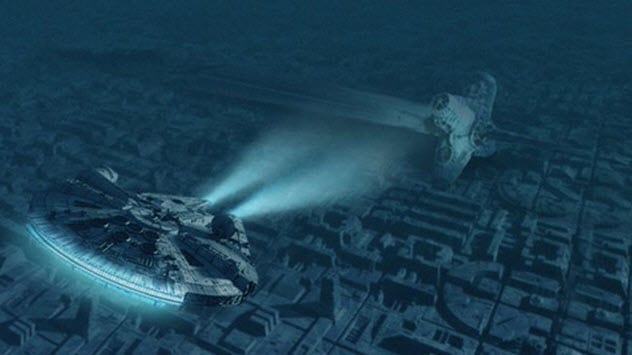 Everyone recognizes the Millennium Falcon as the fastest hunk of junk in the galaxy. But did you know that there was early concept art in which the Falcon journeyed under the sea?

The official Star Wars Twitter account tweeted out an image of the submerged spacecraft approaching the spire that housed Emperor Palpatine’s throne room from Return of the Jedi.

Clearly, the notion of an underwater exploration was scrapped early during the production of the trilogy. But the idea of the Millennium Falcon being watertight as well as airtight is awesome![5] 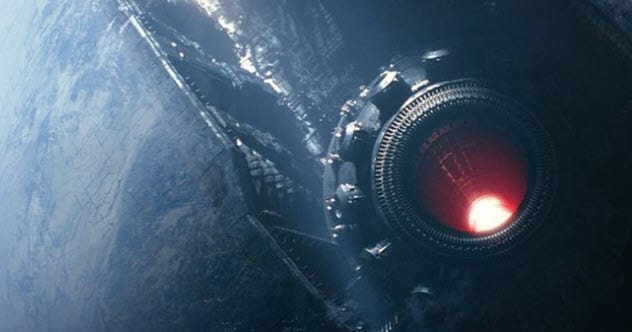 Bad guys get all the cool things—cool armor, cool masks, and even cool superweapons!

In The Force Awakens, the newly formed Resistance needed something to tackle the First Order’s new system-destroying Starkiller Base (pictured above). Enter The Warhammer. This Resistance superweapon was going to drive a wedge between the New Republic and General Leia Organa, but she took great pride in this secret weapon.

Unfortunately, The Warhammer would have been destroyed during the attack on Starkiller Base, rendering The Warhammer useless to the overall plot of the movie. Still, it’s cool to know that the good guys almost had a superweapon, too.[6] 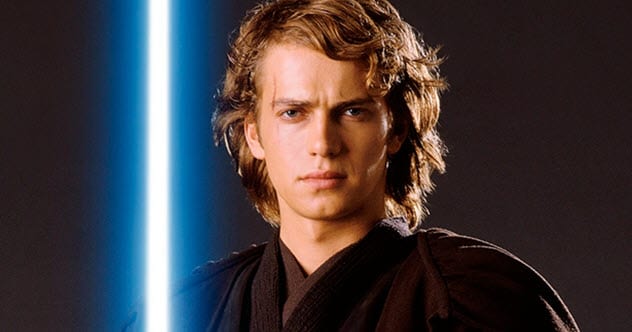 The Skywalker saga is inarguably the story of Anakin Skywalker. The prequel trilogy explains his rise, the original trilogy depicts his fall, and the sequel trilogy shows his legacy. Despite his large presence in the first two trilogies, Anakin remains largely absent from the sequels. However, this was not originally going to be the case.

A Force ghost Anakin was going to show himself to either Rey or Kylo Ren. However, this ghost character was going to slip back and forth between the good—Anakin Skywalker—and the bad—Darth Vader. Speaking about the idea in the book The Art of Star Wars: The Force Awakens, artist Iain McCaig said:

When you light a candle, you also cast a shadow. That inspired me to propose, for the first time, that Anakin’s ghost could come back. [ . . . ] If we see Anakin Skywalker, because he does flow back and forth between Darth Vader and Anakin, let’s see him as a character with a dark and light side.

Although the idea never made it very far, it’s an extremely cool concept to highlight that this is still the story of Anakin Skywalker. Luckily, he did finally make his comeback (albeit only in voice form) in The Rise Of Skywalker.[7] 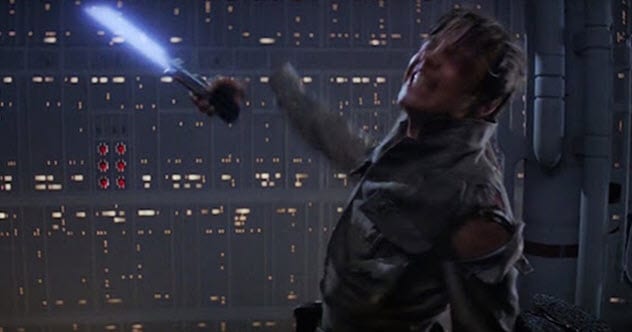 We’ve talked about the alternate opening shot of The Last Jedi, but there was also an alternate opening for The Force Awakens: The camera pans down from the iconic opening crawl to see not a planet but a hand!

It’s Luke Skywalker’s severed hand from The Empire Strikes Back—the one that Darth Vader chopped off during their climactic battle on Cloud City. The hand—still clinging to the lightsaber—floats through space and ends up falling toward the planet Jakku. The lightsaber (without the hand, which burns up as it enters the atmosphere) lands on Jakku and is eventually picked up by Rey or another heroic character.

Although the opening of the movie was changed to something more traditional, actor Mark Hamill confirmed that the alternate macabre opening was in a rough cut of the film.[8]

2 The Eye Of Web­bish Bog 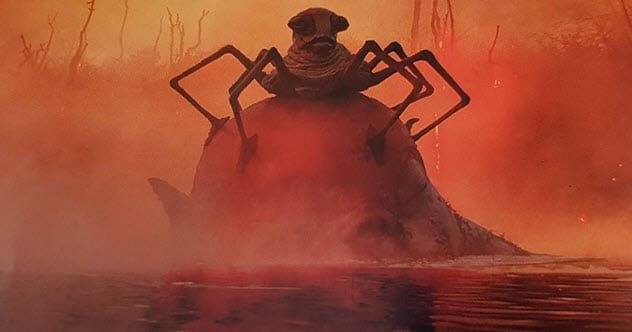 The Rise Of Skywalker opens with Supreme Leader Kylo Ren rampaging through the desolate forests of Mustafar in search of a mysterious wayfinder. However, Ren’s encounter with a creature called the Eye of Webbish Bog didn’t make it into the final cut of the movie.

The creature was conceived as a pasty-skinned being that merged with a spidery tentacle parasite that lived in a rancid lake near the ruins of Darth Vader’s castle (as seen in Rogue One: A Star Wars Story). The abomination would have pointed Ren in the right direction to find the coveted wayfinder that would lead him safely through the unknown regions of the galaxy.

Although the Eye of Webbish Bog never made it to the screen (presumably because it would have made Ren’s quest extra confusing), it is one of the few things on this list that has found life in the novelization of the movie.[9]

1 The Whills Of The Force 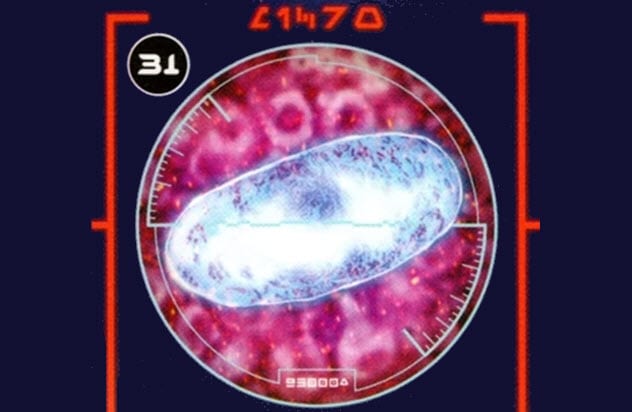 Until relatively recently, this renegade idea had never made it any further than the mind of the original creator of Star Wars, George Lucas himself. His idea for the entire sequel trilogy (had he kept the rights to Star Wars and made the movies himself) was to focus on the midichlorians (or midi-chlorians), the microscopic life-forms that live within Force-sensitive people.

Lucas wanted to ground the Force in the biological world. Although it would have taken away the mysticism of the Force, this idea would have provided a fascinating new angle from which to view the saga. Lucas explained it this way:

Back in the day, I used to say . . . we were just cars, vehicles for the Whills to travel around in. [ . . . ] We’re vessels for them. And the conduit is the midichlorians. The midichlorians are the ones that communicate with the Whills. The Whills, in a general sense, they are the Force.[10]

Unfortunately, Lucas decided to sell his company Lucasfilm (which included the rights to the Star Wars movie franchise) to Disney in 2012 for $4.05 billion. He also provided Disney with an outline for a sequel trilogy. But Disney largely ignored Lucas’s ideas and took the Star Wars franchise in a much different direction.