Hunting has been an American tradition since the settlers first arrived, with many carrying on the heritage from generation to generation. For some, it’s a favorite pastime where one can feel a sense of freedom and tranquility while alone in the wilderness. However, that serenity can be forever shattered when the hunter becomes the hunted. The following 10 cases involve men who unknowingly walked into the belly of the beast, never to return. 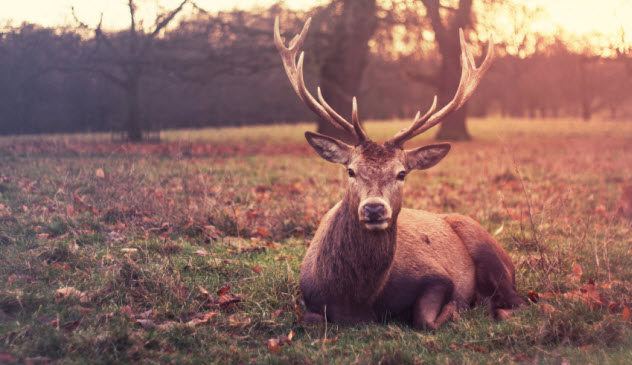 In 2011, a 62-year-old Indiana man named Paul J. Smith was hunting deer at Chain O’Lakes State Park. Around 9:00 AM, he left a message on his son’s voice mail about a scuffle that he had just had with a deer. Smith described how he was coming down from his tree stand after shooting the deer, only to discover that the animal was still alive and willing to fight to the death.

According to Smith’s account, he and the deer physically fought before Smith pulled a knife and stabbed the animal to death. Following the voice mail, Smith called park officials because he needed help transporting the deer’s carcass to the park’s check-in station.

When park rangers arrived, they were horrified to discover Smith lying unconscious beside a tree. Paramedics tried to revive Smith with CPR. They also used a portable defibrillator to attempt to restart his heart. However, it was too late, and Smith was pronounced dead at the scene.

According to the autopsy report, Smith was covered in bruises from his fight with the deer. Smith appeared to have been kicked by the animal, which caused internal bruising and laceration of his liver. Ultimately, this led to his death. 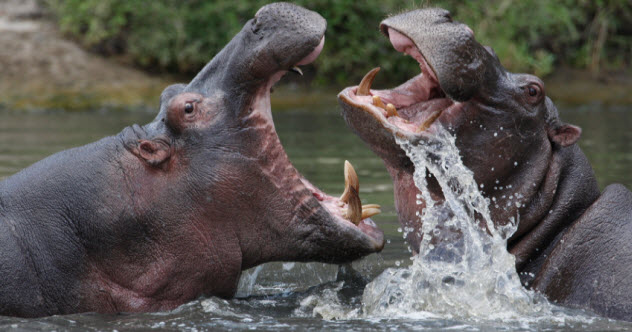 Armed with his rifle, Spencer Tyron was sitting in his canoe near the shores of Lake Rukwa, Tanzania, hunting for sport. Perhaps the sound of gunfire caused some wildlife to flee from the surroundings while drawing the attention of other wildlife, lurking unseen beneath the muddy water.

Before Tyron knew what had occurred, a hippopotamus flipped over his canoe, leaving him vulnerable to the same animals that he was hunting. Moments later, the hippo attacked Tyron, biting off his shoulders and head. Months later, a South African man named Marius Els was killed by his pet hippo, Humphrey, when the 1,200-kilogram (2,600 lb) animal attacked, biting and gouging him to death.

To many people’s surprise, hippos are some of the most unpredictable and dangerous animals and one of the most feared in all of Africa. In fact, the largest number of wildlife attacks on humans in South Africa is due to hippos, accounting for more deaths than all other animals combined. As the third largest animal in the world and with a roar as loud as a lion, hippos are known to bite, trample, and charge at people, casting fear throughout Africa while killing the unsuspecting and uninformed. 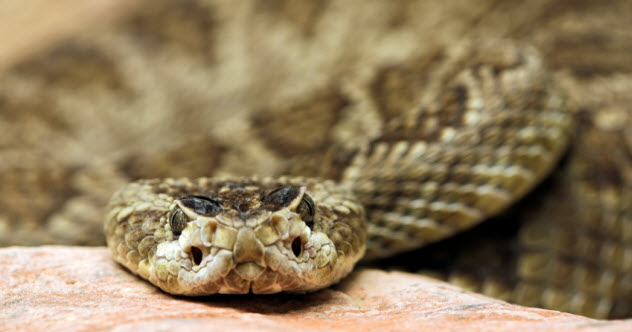 In 2009, 68-year-old Dick Rupert was in the woods of Georgia hunting with his 12-year-old grandson. Around 7:30 AM, Rupert was descending from a tree stand when a rattlesnake suddenly bit him on his calf. Rupert’s grandson quickly came to his aid.

After realizing the severity of the situation, the grandson tried to drive Rupert on the back of his ATV to a main road, but Rupert fell off the ATV twice. By the time his grandson managed to drag him to a road, Rupert was unconsciousness and already falling into cardiac arrest.

The grandson had already begun CPR when paramedics arrived at the scene, but it was to no avail. Rupert was pronounced dead one hour later at the hospital.

Following his death, Georgia media began reminding its citizens of the dangers of rattlesnakes, especially given the time of year. Rattlers don’t pose much threat during the hot and cold months because they primarily stay dormant until the temperatures are mild. At that time, especially in wooded preserves, people need to be extra cautious. 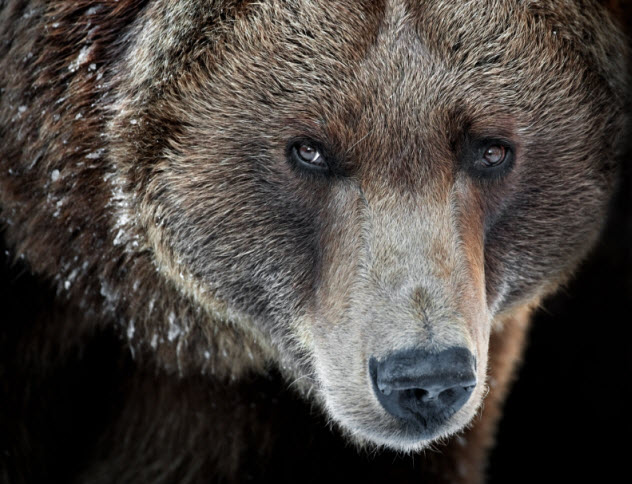 In September 2011, 39-year-old Steven Stevenson of Winnemucca, Nevada, was with his friend, 20-year-old Ty Bell, hunting black bears in northwest Montana when the duo spotted their prize. Bell, mistaking a young grizzly bear as a black bear, shot at the animal and wounded it.

However, the grizzly did not immediately fall to the ground. Instead, it took refuge within the woods. Bell and Stevenson sought out their prey, eventually tracking the wounded animal to a remote area with thick covering. Believing the grizzly was dead, the pair made their way to claim their kill, not realizing that the bear was still alive and very angry.

The bear charged toward Stevenson and began to maul him. In that moment, Bell fired multiple shots in an attempt to save his friend. Seconds later, the bear was killed and Stevenson was dead.

Although investigators at the scene said that Stevenson had been mauled to death by the grizzly, the autopsy report later stated that Stevenson had actually died of a gunshot wound from Bell as he attempted to halt the bear’s attack. No charges were brought against Bell in the death of Stevenson. 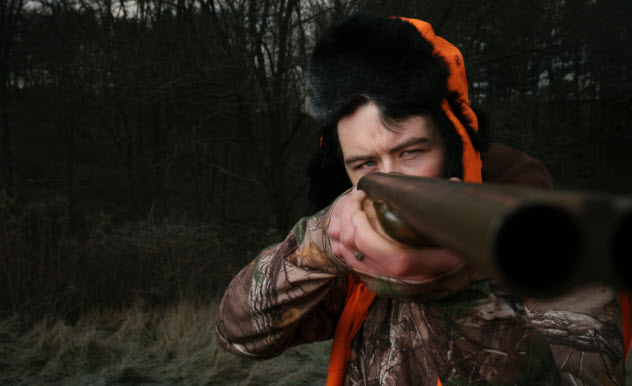 In 2013, 52-year-old Charles Bruce, a volunteer firefighter for the Malverne Fire Department in Long Island, was on a weekend hunting trip with other firefighters, including his best friend and coworker. On a late Saturday afternoon, Bruce decided to call it a day and was heading out of the wooded area when shots rang out from another hunter’s rifle 50 meters (180 ft) away. Bruce was struck in the chest and died instantly.

The shooter was Robert Gerbino, Bruce’s best friend and fellow volunteer firefighter. Gerbino stated to police that he had mistaken Bruce for a deer and had fired accidentally.

However, police found his statements troubling and hard to believe given that he couldn’t tell the difference between a deer and a human being. Gerbino was charged the following year with criminal negligent homicide. He pleaded not guilty at his arraignment, and the case is ongoing. 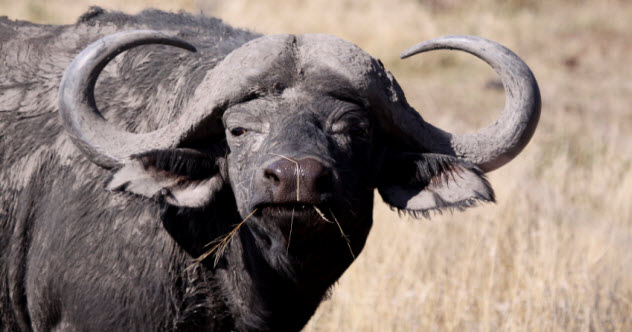 In June 2012, professional hunter Owain Lewis worked for Chifuti Safaris and was hunting with a client in the Chewore North concession of Zimbabwe when his worst nightmare was realized. After the hunting party took a shot at a buffalo in the distance, the wounded animal escaped into the desert.

As a professional, Lewis insisted that he and his client track down the buffalo regardless of how long it would take. Three days after the initial shooting, the men found the injured animal lying on the ground. The pair aimed and fired.

However, the buffalo was still alive and managed to run a short distance before coming to a stop in a clearing. With his final round in the chamber, Lewis fired at the buffalo but to no avail. This time, the animal charged Lewis, goring him and tossing him aside like a rag doll. Lewis died at the scene. The other hunter shot the buffalo several times until the animal was finally killed.

Tremendous support poured in from those who had known, worked, and hunted alongside Lewis. Some described him as “very skilled, knowledgeable, and experienced.” Following Lewis’s death, a memorial account was created in his name to help his widow, who was financially struggling. 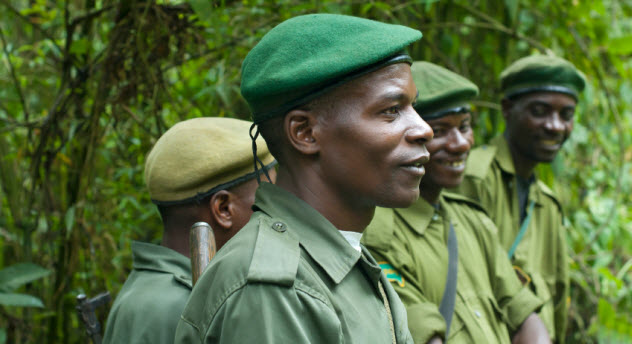 Over the years, the demand for ivory in China has skyrocketed, causing a growing crisis as poachers seek out elephants for their skin and tusks. In 2007, the problem got worse when the Convention on International Trade in Endangered Species temporarily lifted the ban on the sale of illegal ivory. In fact, between 2010 and 2012, at least 100,000 elephants were killed in Africa by poachers.

In 2015, armed poachers on Choke Ranch in southern Kenya shot and killed an elephant on private land. Unlike the previous stories, the hunters in this case were not hunted by an animal but by the wildlife rangers who arrived on the scene shortly afterward.

To the poachers’ dismay, the rangers were also armed and a firefight quickly ensued. In the end, one of the poachers was killed and the remaining men fled on foot. Reports claimed that the men were about to cut the tusks off the elephant as the wildlife rangers arrived. Some human rights group, such as Muslims for Human Rights, have accused the rangers of acting as the judge and jury by executing suspects that they believed were poachers. 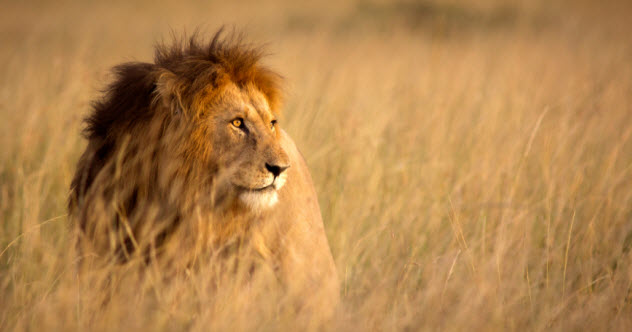 In 2015, a 24-year-old South African man named Matome Mahlale entered a private farm with four other men and their dogs. The group intended to hunt, but their actions were illegal because they did not have a license to do so.

After 9:00 PM, the men were surprised by two lions that had charged after the group. One of the men was able to run for cover while three of them took refuge in a tree. However, Mahlale was neither as fortunate nor as fast as the others. He and two of the hunting dogs were tackled by the lions and ultimately mauled to death.

Illegal hunting has been a growing problem for police in South Africa, especially given the limited resources available to catch those responsible. The vast territory only adds to the problem, with one official stating that it would be impossible to prevent all illegal hunting.

The death of Mahlale happened shortly after Cecil the Lion was killed by an American hunter. So there was little support or sympathy for the illegal hunter, with some describing the event as a lion’s attempt to “turn the tables.” 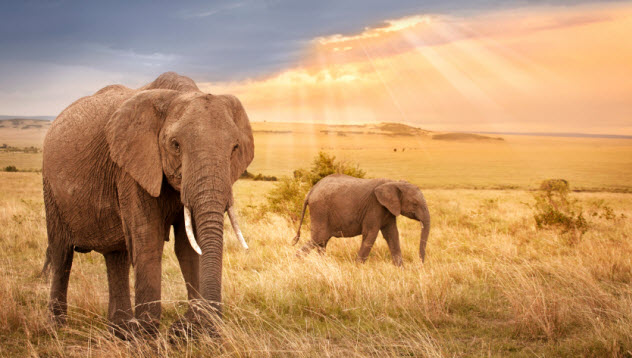 In 2015, 55-year-old Ian Gibson was also an experienced hunter leading a hunt for Chifuti Safaris when he was killed by an animal. Accompanied by an American client in Chewore North in lower Zimbabwe, Gibson spotted a young bull elephant in the distance and decided to pursue the animal. A colleague of Gibson’s described the elephant as being in musth, which is a state in which the elephant’s urge to mate goes into overdrive and causes the animal to become extremely aggressive.

At one point, Gibson got as close as 30–50 meters (100–150 ft) when the bull elephant turned and charged him. Gibson was able to fire one shot at the elephant, but the animal continued toward Gibson, eventually trampling him to death. The client with Gibson was unharmed. 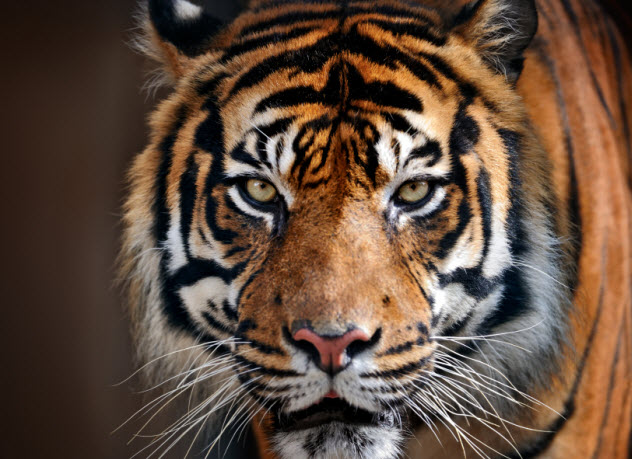 In the Russian Far East in 1997, Vladimir Markov, an experienced poacher, was making his way through the snowy winter mountains in search of an exceptional kill. One cold day, he raised his rifle and fired at a tiger that refused to die.

The tiger, wounded and bleeding, escaped into the wilderness but soon returned. In a scenario as bizarre as Hollywood could imagine, the tiger staked out Markov’s cabin, destroying anything and everything that had Markov’s scent. After doing so, the tiger waited for the man’s return.

It has been reported that the tiger was systematic, calmly waiting for up to 48 hours. When Markov finally emerged from the woods and walked toward his cabin, the tiger attacked, dragged Markov into the bushes, and ate him. The events of that day inspired the book, The Tiger: A True Story of Vengeance and Survival by John Vaillant, which detailed the animal’s chillingly premeditated hunt and kill.