After the eruption of Mount Vesuvius on August 24, 79, the entire city of Pompeii in the Bay of Naples was buried and forgotten until the mid-18th century. Today, Pompeii is one of the most iconic archaeological sites and it holds a special place in the imagination of the general public.

When the volcanic gas and ashes reached Pompeii and sealed its fate, the city was “paused” in time. When the site was rediscovered, its excellent state of preservation became apparent. In terms of volume of detailed archaeological data, no other site can rival Pompeii.

This list contains 10 interesting facts about this rich site, which hopefully will allow the readers to recreate in their minds some fascinating details of this incredible ancient city. 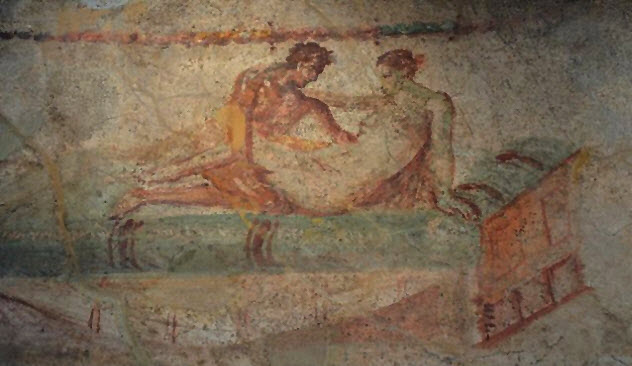 Excavations at Pompeii have identified roughly 25 building where prostitution was practiced. The majority of these places were merely composed of a single room, but there is one building known as lupanar (lupa in Latin means she-wolf and is the slang for prostitute) which was fairly big and highly organized.

Based on the studies of the prostitutes’ names preserved in graffiti, it is believed that they were slaves, most of them either Greek or Oriental. The fee they charged was relatively reasonable: It was the equivalent of a few glasses of wine. 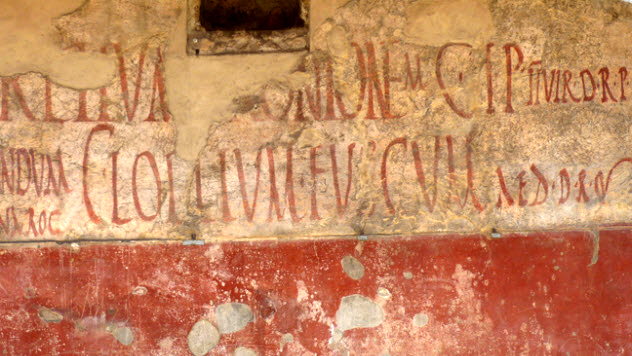 Pompeii still preserves a large number of graffiti and wall paintings, which offers us a rare opportunity to read directly the words and thoughts of ancient Roman society. The nature of these inscriptions is wide, ranging from private messages to various communications such as election notices. Here are some examples:

“I don’t care about your pregnancy, Salvilla; I despise it.” [private message]

“If you’re going to fight, get out!” [written on a tavern wall]

“The gladiatorial troupe of Aulus Suettius Certus will fight at Pompeii on 31 May. There will be a hunt and awnings.” [advertisement]

“Wall, I am amazed you haven’t fallen into ruins, since you bear the tedious scribbling of so many writers.” [found at four different walls]

“Myrtis, you suck well.” [found at a brothel]

There are also a number of elections notices, normally painted on walls at central locations and busy areas to maximize their exposure. Not all of these were favorable to the candidates. Bitter irony was practiced frequently:

“All the late drinkers ask you to elect Marcus Cerrinius Vatia as city magistrate.”

“The petty thieves ask you to elect Vatia as city magistrate.” 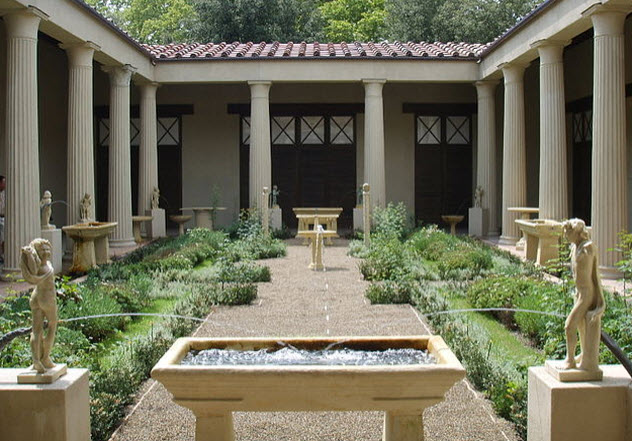 Although Pompeii is identified as a Roman city, archaeologists have good reason to believe that the site was previously occupied by the Greeks. The oldest architectural remains of the city, dated to the sixth century BC, are fragments of a Greek Doric temple.

This is consistent with the fact that during the sixth century BC, the coastal area where Pompeii is located had several Greek outposts’ settlements. Pompeii became part of the Roman world a few centuries later.

There is evidence of earlier occupation as well, but as far the architectural remains go, the Greeks seem to be the first group who manage to erect buildings that are still identifiable today. The original settlers, whoever they were, did not realize that the land they were occupying had been formed by a previous eruption of Vesuvius.

The impressive fertility of the soil was in fact the result of volcanic material deposited by the activity of Vesuvius. It would be interesting to know how many communities before Pompeii suffered the same violent fate. 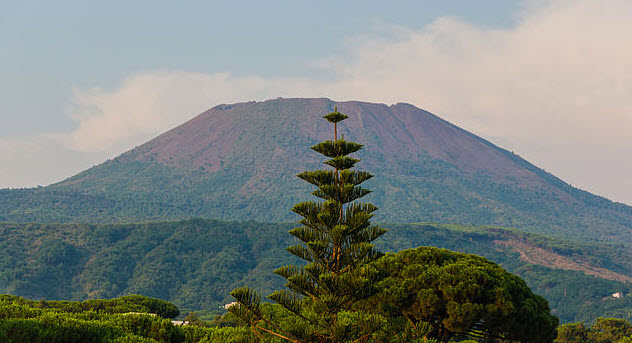 Most of us have heard about the devastating eruption that buried Pompeii, but it is less known that Pompeii received some early warnings on the disaster that was about to come. In AD 62, Pompeii was badly damaged by an earthquake.

Its inhabitants did not know the reason behind this, but we do: The shock was the result of a plume of magma moving up under Mount Vesuvius. During the years prior to the eruption, Pompeii was affected by minor earthquakes quite frequently. Vesuvius was about to wake up. 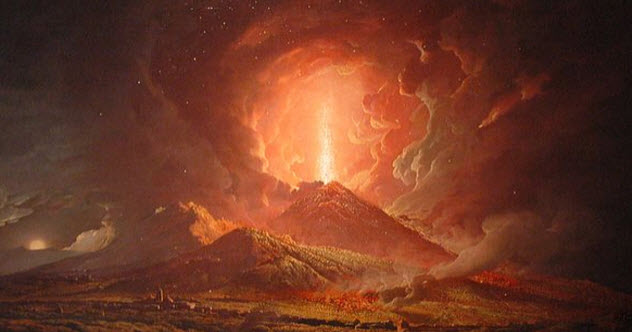 Pliny the Younger witnessed the eruption from a safe distance and wrote down what he saw, leaving for us a valuable and truly vivid firsthand record of the eruption that buried Pompeii. Pliny was staying at Misenum, a city located on the Bay of Naples on the opposite side of Pompeii.

According to his account, strangely shaped clouds over the location of Pompeii drew his attention during the early morning of August 24, 79. Pliny described the cloud as a pine-looking umbrella with a long vertical trunk and a flat top. His account claims that he felt a number of earthquakes during the night.

By dawn of August 25, he left the villa where he was living, in fear that it might collapse. He also saw the sea being sucked back from the shoreline as a result of another powerful earthquake “leaving sea creatures stranded on the dry sand.”

The waters returned to the shoreline after a while. Later on, the wind shifted and brought the volcanic cloud on top of Misenum and left the city in darkness. 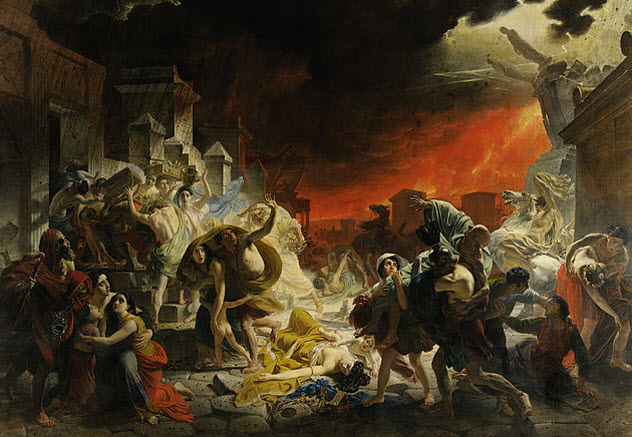 It is a well-known fact that the eruption of Mount Vesuvius that ruined the city of Pompeii had a cataclysmic force, but how strong was this force exactly? Questions like this are never easy to answer. The best we can do is come up with educated guesses. The best estimation in this case claims that the eruptions had a strength of 500 times that of the atomic bomb dropped on the city of Hiroshima.

Mount Vesuvius’ devastating power was considered proverbial by some people. Martial, an ancient Roman poet, wrote: “Everything ’round Vesuvius lies submerged in flames and mournful ashes; not even the gods above would wish to have so much power.” (Epigrams 4.44.7-8) 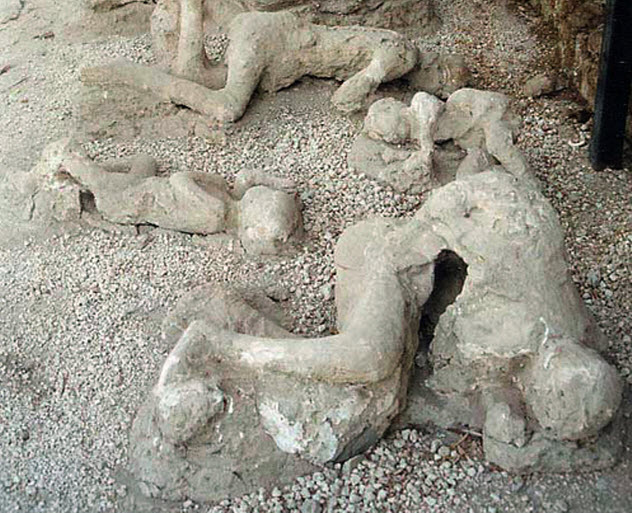 The body count at Pompeii gives us a figure of 1,000 to 1,500 dead bodies. Since the earliest excavations were poorly recorded, this figure is not reliable. If we add the unrecorded bodies plus those bodies still to be discovered at the unexcavated areas of Pompeii, the number of estimated casualties rises to about 2,500.

The number of people who fled during the eruption is impossible to know. That means that the estimated body count, although a revealing piece of information, has little or no use is establishing the total population of Pompeii. 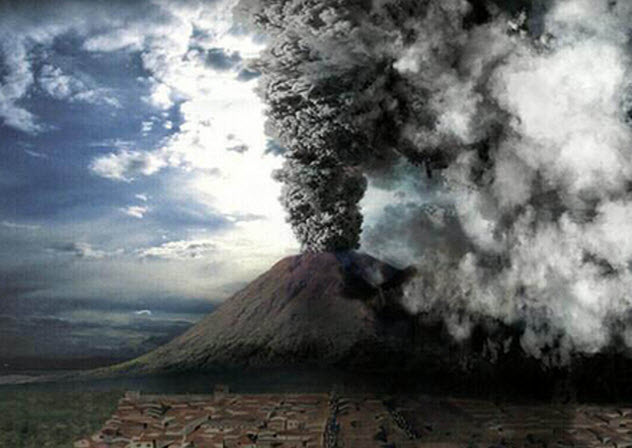 Some of the details on the sequence of events that followed the eruption are available to us thanks to recent geological research. After Mount Vesuvius woke up on August 24, 79, a thick cloud of volcanic ash moved toward Pompeii, depositing a coat of ash and debris on top of the streets and buildings.

As the ashes and volcanic residues continued to fall over Pompeii, some of the buildings and structures started to fail. They began to collapse as the weight of the accumulated volcanic material became heavier and heavier. At this point, the layer of ash might have been about 2.8 meters (9.2 ft) thick. The inhabitants of Pompeii were also able to feel some intense Earth tremors, and the burning of Vesuvius’ slope must have been noticeable.

On August 25, possibly around 7:30 AM, a pyroclastic flow reached Pompeii, destroying the villas outside the city wall. A second wave of volcanic hot gas and rock moving at 100 kilometers per hour (60 mph) reached Pompeii a while later, this time overflowing the city walls and killing every living being in the city.

A few more waves followed. By the time it was all over, Pompeii was buried under 5 meters (16 ft) of volcanic material. The tips of the tallest buildings were the only thing visible. 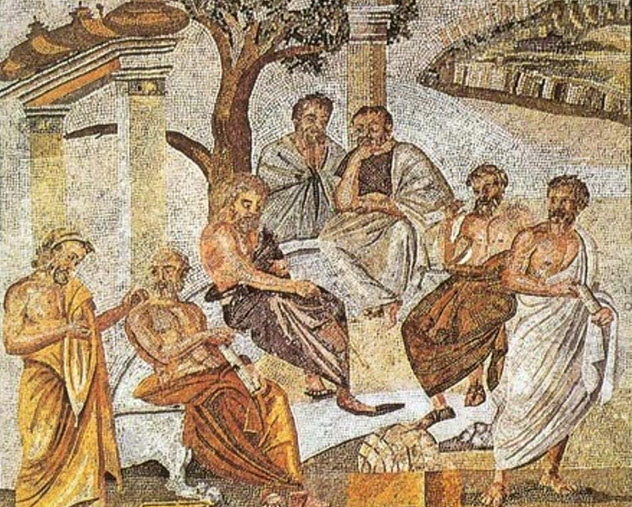 Pompeii was rediscovered accidentally in 1594 during the digging of a water channel. By pure chance, the workers uncovered frescoed walls and an inscription containing the name of the city. 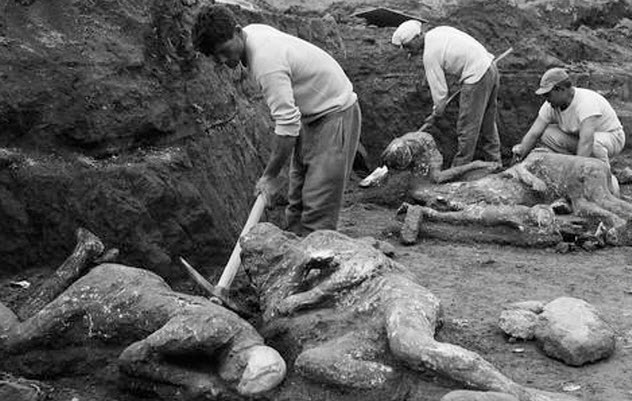 When the Italian archaeologist Giuseppe Fiorelli took control of the excavations at Pompeii in 1863, he noticed the regular occurrence of occasional empty spaces in the layers of volcanic ash. The size and shape of these vacant areas were consistent with the size and shape of human bodies.

It was then realized that the voids were the result of human bodies that had been decomposed, leaving behind a clue in the ashes. Fiorelli went one step further, and by 1870, he developed a technique that would allow him to retrieve the shape of the dead bodies by injecting plaster into the cavities.

The voids acted as a mold, and the end product was a plaster cast that recreated the shape of the victims with astonishing accuracy. This technique was improved later by using a transparent glass fiber instead of plaster.

Glass fiber has an advantage: The remains in the cavities (e.g., bones and various artifacts) are kept inside the cast and visible. Hundreds of plaster casts can be seen today both at the ruins of Pompeii and at the Archaeological Museum of Naples.