For millennia, people tried to capture music’s fleeting magic. Before recording, musicians crafted complex systems to preserve song. Some songs are needed for rituals. Others provide listeners with practical knowledge: maps used for navigation or storehouses for knowledge. Some remind us that life is short—and meant to be enjoyed.

Ancient songs allow us to time-travel through sound. They reveal deep mysteries about music, the world, and ourselves.

In 1955, in the palace of ancient Ugairt, in Syria, archaeologists unearthed a clay tablet containing a musical fragment dating back 3,400 years—millennia older than the previously oldest known composition.

The tablet contained a cuneiform inscription in Hurrian, an ancient Mesopotamian language. It also included a system for reproducing the melody. The hymn is dedicated to Nikkal, goddess of the orchards, and was to be accompanied by the nine-string lyre.

The work is unsigned, and the composer remains anonymous. The text of the song is written in an obscure form of Hurrian, which remains impenetrable to linguists. The Hurrian hymn uses a diatonic (do-re-mi) scale.

What are song lines?

Australian aboriginal culture goes back 50,000 years, making it the most ancient on the planet. A central element of this prehistoric culture are the songlines—or Dreamings. These musical creation myths not only work as maps to navigate across the inhospitable Australian landscape but serve as moral systems that clearly define relationships between men, animals, and the landscape.

Songlines provide descriptions of thousands of kilometers and were connected disparate people from unrelated linguistic groups. These songs change as they enter the new territory, incorporating elements from the new language and tribal histories. Some songlines also contain highly accurate maps of the stars. These were used for travel at night and also served as predictors for when and where certain resources would become available.

8The Harper’s Song Of Inherjhawy

Near the Royal Tombs at Thebes, archaeologists discovered a series of love poems and music, including The Harper’s Song of Inherkhawy. Dating to 1160 BC, the tune provides a view into the emotional life of Ancient Egypt. It asks listener to seize the moment and view the afterlife with a healthy amount of skepticism.

Clear depictions of the instruments appear, but accurately reproducing the melody presents a challenge. The prevailing theory is that the Ancient Egyptians did not develop a system of musical notation until the conquest of Alexander the Great in 332 BC.

Others disagree. Musicologist Hans Hickman proposed that the figures in scene use hand gestures to communicate pitch and rhythm. This technique is known as cheironomy, which exists to this day in the liturgical music of the Egyptian Coptic Church.

The Beth Gazo—or Treasury of Chants—was compiled about 1,800 years ago. This is the oldest surviving music in Christianity. The Beth Gazo is written the Syriac language—the ancient dialect of Aramaic spoken by Jesus. By reproducing the text and melody, a modern Syriac Orthodox priest can bring to life the earliest days of the Christian church.

The Beth Gazo originally contained thousands of tunes. Roughly 700 survive—along with only four of the eight modes, or scales. Will the remaining portions of the Beth Gazo persevere through the present Syrian conflict?

A chance discovery at the British Library revealed the earliest-known work of polyphonic music: a song written for more than one part, the type of music that would dominate the Western world for the next 1000 years. It is a chant dedicated to Saint Boniface, the patron saint of Germany. The work was inserted into the end of a biography of Bishop Maternianus of Reims. The author remains anonymous. Experts believe the song came from northwest Germany about the year 900.

The piece is an organum with two vocal parts: one for a principal singer, and another for an accompanist to providing harmony for the lead line. This is 100 years older than the previously oldest known polyphonic work, “The Winchester Troper.”

5The Book Of Psalms 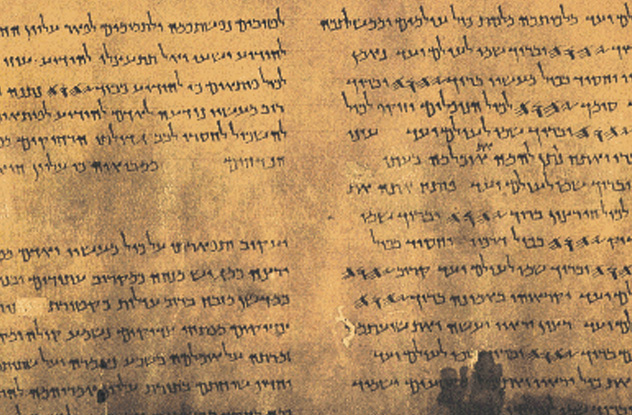 While many think of the Old Testament’s Book of Psalms as a collection of poems, they were meant to be sung. “Psalm” is derived from the Greek word psalmos, a song accompanied by a stringed instrument. Additionally, there are notes to musicians woven throughout. Some indicate what octave should be sung. Others specifically reference the ancient eastern modes that should be employed.

In the Dead Sea Scrolls, the oldest version of the Book of Pslams, there are melody notations known as te’amim or cantillation marks, but we have lost the ability to interpret these notations. No modern copies of the Psalms contain the original music, and many believe the code to be lost forever.

The First Delphic Hymn To Apollo

In 1893, French archaeologists discovered two hymns at Delphi, the spiritual center of ancient Greece. The songs are addressed to Apollo, the god of music, light, and prophecy, and have been dated to 128 BC.

Musically, the hymns are straightforward. The first one contains vocal music; the other, instrumental. What makes the Delphic Hymns unique is that they are the earliest music whose composer is known. The first was written by Athenios son of Athenios; the second, by Limenios, son of Thoinos. Limenios was a virtuoso player of the kithara—the four-stringed harp of Apollo.

The words of Homer, Sophocles, Euripides were all originally performed with music, which is now lost to us. The Delphic Hymns hint at the treasures of Ancient Greek left to be discovered.

In the southwestern Indian state of Kerala on the Malabar Coast, there is a tradition of oral transmission so ancient it may be pre-human. Here, Brahman priest families pass traditional mantras, or meditative chants, from father to son with exacting detail so that every syllable and utterance is recalled. This process has gone on for millennia.

These mantras are in no known language. Some believe they preserve a forgotten Bronze Age tongue. Other consider them “beyond language,” untranslatable sound patterns in which form trumps everything. The syntax of many mantras resembles bird song—small fragments, repeated indefinitely, or reduced to nothing. The importance of these mantras lies in ritual., repeating the same thing as accurately as possible throughout the ages.

The Sama Veda is the musical component to the Hindu Vedas and is considered the world’s oldest collection of music. Composed nearly 4,000 years ago, these chants were passed with painstaking accuracy between guru and student until they were written down between 1200 and 1000 BC. They are in the ancient Arsha language, a precursor to Sanskrit.

The Sama-Veda contains an entire worldview, even scientific thought. It is believed they were written over pre-existing tunes, hinting at even earlier music. Ragas, the scales that serve as the basis for Hindustani music, can trace their origin to the Sama-Veda.

The Sama-Veda initially contained 13 shakhas, or branches. Now, only four remain. Modern scientists are now exploring the science contained in the Samaveda.

In 1883, near Aydin, Turkey, archaeologists discovered a marble stele containing a song. The date of origin is unknown. Most experts place it around the first century AD. While earlier musical fragments exist, the Song of Seikilos is the earliest complete tune.

The inscription is simple, leaving no doubt as to the monument’s function: “I am a tombstone, an image. Seikilos placed me here as an everlasting sign of deathless remembrance.” The brevity of the song contributed to its survival. It could easily be carved on one monument. The lyrics are simple and human, cutting across time and culture

While you live, shine
Have no grief at all
Life exists only for a short while
And time demands its toll

What strikes a modern audience is how Middle Eastern the song sounds. The intervals are familiar to the 21st century. However, ancient Greek tunings and instruments differ from ours. The music hints that the Eastern and Western worlds are closer than we think.

Abrahm Rinquist is the executive director of the Winooski, Vermont, branch of the Helen Hartness Flanders Folklore Society. He is the co-author of Codex Exotica and Song-Catcher: The Adventures of Blackwater Jukebox.