We’ve seen pictures of them, rock bands have used them on their sleeve artwork, blockbuster films have been made about them—and most of us know they’re the work of hoaxers who have a plank of wood, some rope, and too much time on their hands. However, there are some really interesting points about crop circles that fool us into thinking there might be something a little more to them than just pranks. 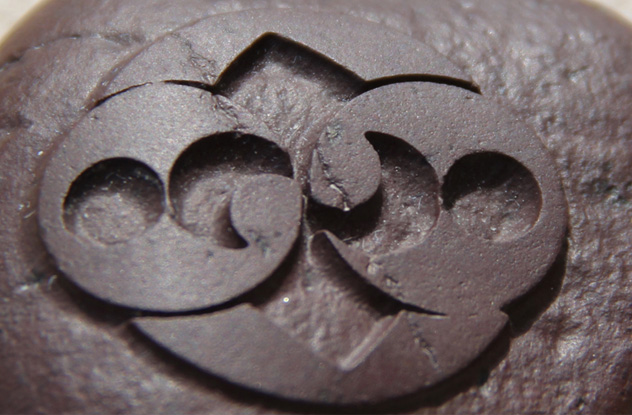 While out in the desert near where the Roswell incident took place, Robert Ridge came across a strange rock that caught his attention. It was a different color from all the others, and on its top was a strange symbol or pattern that appeared to have been expertly carved into it. When the rock was further examined, it was also magnetic, solid, very old, and not a rock that would occur naturally where Ridge had found it.

The strangest twist however occurred when Ridge conducted further research into the symbol. He discovered a crop formation from Chiseldon in England that had appeared eight years earlier in 1996—a formation, incidentally, that was regarded as genuine by investigators at the time. Using modern computer software, the symbol was placed over the crop circle and matched it perfectly.

9Does It Pass The Bend Test? 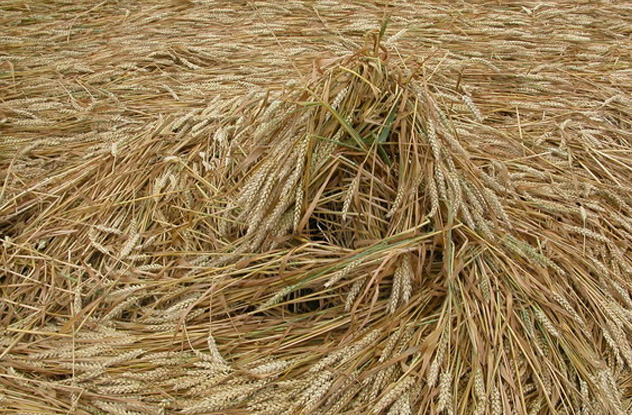 One of the main ways to tell if a crop formation is a hoax or not, at least according to experts, is to examine how the crops have been bent. Obvious hoaxes will usually see the crops snapped down into place relatively clumsily, with the stems broken. However, so-called genuine formations show the crops folded or bent into place, with the stems still intact and the crops still good to harvest.

This bend in the wheat is often just before the first node, and investigation has suggested that this is achieved by subjecting the area to a quick blast of extremely high temperature.

Beneath and within these crops formations are the remains of small animals and dried-up insects, in particular dead flies often found still on the wheat itself, as if frozen in the position it was in when the circle was formed. There have even been cases where flocks of birds flying overheard will break apart from their formation and purposely fly around the crop circle.

In 2013, over 100 elk were found dead in a field where a crop circle was discovered nearby. Testing suggested that they had not died from disease or a virus, and their death remains a mystery. 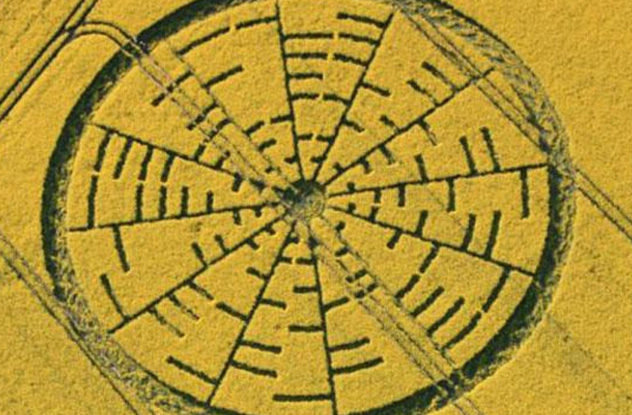 Many crop formations are not just pretty pictures. Some, when studied closely, have been found to contain complex mathematical equations and even coded messages.

In May 2010, a crop circle appeared in Wiltshire, England, was said to contain “Euler’s Identity“—“the most beautiful and profound mathematical equation in the world.” Two years earlier, only a small distance away at Barbary Castle, another crop circle had appeared. When an American astrophysicist saw it in a newspaper, he promptly claimed the formation represented the first 10 digits of pi. 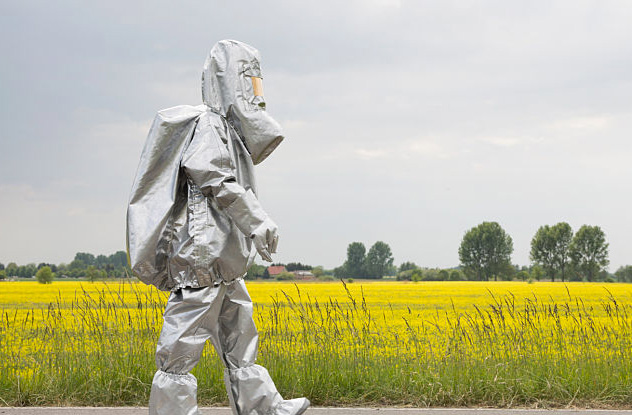 One of the first things investigators into crop formations test is the presence of radiation and other anomalies in the immediate vicinity. Nuclear physicists Micheal Chorost and Marshall Dudley laid the groundwork for this when investigated and logged research of several crop formations in 1991. They found that levels of radiation in the soil were triple the norm.

The scientists also examined crops and plants positioned outside and away from the crop circles. Their make-up was considerably less damaged, suggesting whatever had made the crop circle emitted a large dose of radiation within its boundaries. They also found what appeared to be evidence of “rapid healing and cooling,” as some of the crops from within the circles seemed to display an increase in seed germination. 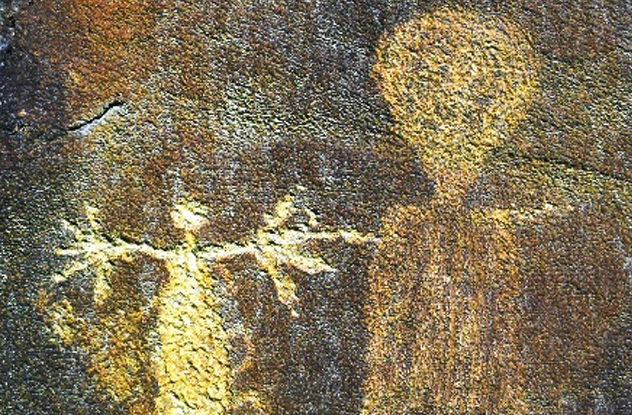 Perhaps one of the reasons we almost automatically associate crop circles with UFOs and aliens is the stories from various Native American tribes who, when they would discover such formations on their land, would attribute them to the star people of the star nation. Most tribes speak of star beings or star people who “came from the sky” and began their civilization.

Many Native American tribes also claim these crop circles are sacred symbols, while also claiming some of the formations are based purely on mathematics.

4Stonehenge Crop Circle Appears In Full View Of The Public 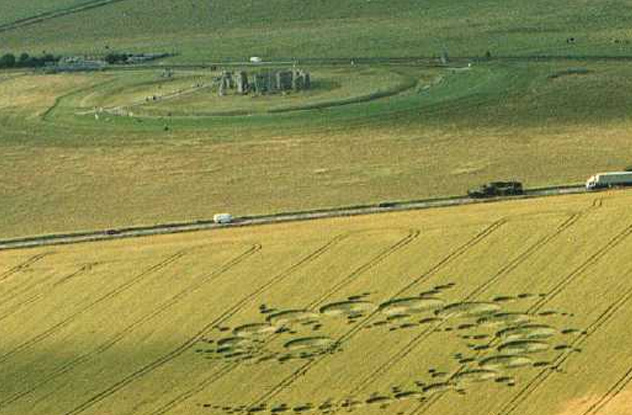 In summer of 1996 at Stonehenge in England, a crop circle was said to have formed almost in front of bewildered motorists and visitors. Named “The Julia Set,” this particular formation was able to have its arrival pinned down to a specific rather than approximate time, with the analysis showing it took at most only an hour to form.

A small aircraft pilot flying overhead reported that both he and his passenger could attest the field was “as normal” at 5:30 that afternoon, but by 6:15 PM when he was flying back over the field on his return flight, the formation had now appeared. Fifteen minutes later, cars were lining the side of the normally busy road so drivers could glimpse the mysterious pattern.

Researcher Lucy Pringle spoke to several of the people at the roadside. Some claimed to have witnessed the arrangement being formed as a “swirling cloud of mist” spun its way around the field. 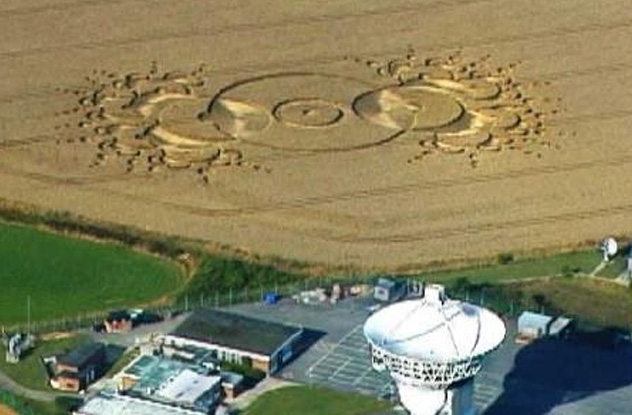 Two of the most intriguing crop formations appeared in a field opposite the Chilboton Observatory in 2001. One appeared to be a face, but the other was even stranger. It appeared to be a replica of a binary radio signal sent out into the universe by a team of astronomers led by Carl Sagan in 1974—the Arecibo message.

When studied closely, however, parts of the binary had been altered. Instead of information about humans and our solar system, the startling crop formation appeared to be a reply with information about someone else’s genetic makeup and star system.

Alien enthusiasts hailed this as proof of alien existence, while most treated it much more skeptically. Incidentally, declassified NSA documents concerning the monitoring of replies from the Arecibo message revealed that a total of 29 replies were received. Make of that what you will. 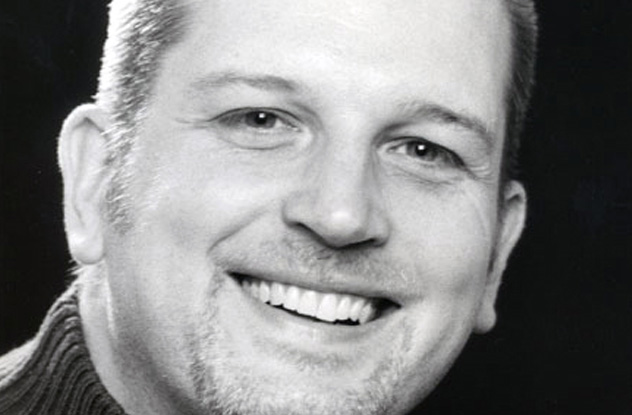 When outspoken sceptic and self-confessed crop circle hoaxer John Lundberg saw for himself the formation called “The Galaxy” in 2012 in Wiltshire, England, he said he wasn’t looking at the work of hoaxers. The arrangement consisted of 400 perfect circles stretching over a 500-meter (1,500 ft) field. Some people believe Lundberg himself was responsible.

He denied this, saying, “Given that there are 400 circles, some of which span 70 feet, that would mean that one of these circles would need to be created every 30 seconds and that’s not even allowing time for the surveying, purely for flattening. This formation pushes the envelope, and that’s a massive understatement.”

Crop circle expert Karen Douglas echoed Lundberg’s sentiments, stating that the “size and complexity” of this particular formation differentiated it from other crop circles that had been studied.

One phenomenon often linked to crop formations is the appearance of strange orbs or white balls of light. These lights appear a meter or two from the surface of the ground and move rapidly, giving the impression of intelligence. Many researchers have suggested that these strange lights appear the likely cause of crop formations, although none seem to understand how or why this is the case.

This phenomenon has been captured in photographs and on film numerous times. In 2013, the above video appeared on YouTube, claiming to show a crop circle being formed. One of the anomalies spotted were strange orbs or balls of light.