To a sane observer, beauty pageants can seem to be rather strange affairs, yet they are an ingrained part of modern culture in many parts of the world. The idea of women being judged primarily on their looks, and only secondarily on their talent, is nothing new. But if you look back through history at the beauty pageants of bygone days, you’ll see that this was sometimes taken to the extreme. If anything, beauty pageants are becoming less strange! 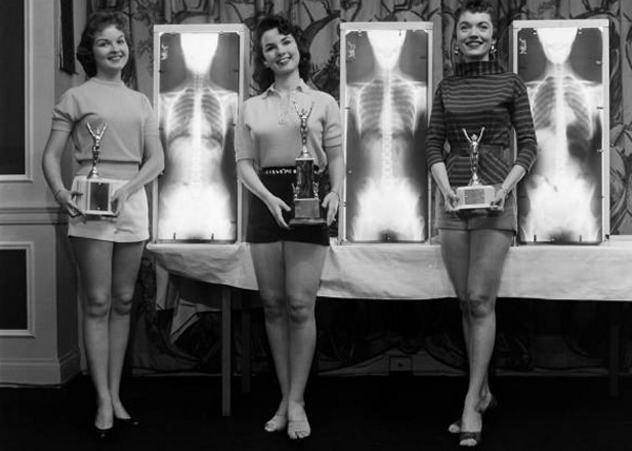 In the 1950s and 1960s, US chiropractors held a number of beauty pageants where contestants were judged not only on their beauty, but also on their standing posture. Said posture was checked by a number of methods: A plumb bob was used to check the straightness of their backs, X-rays were used for examining their spinal structures, and two scales were used for evaluating their weight distribution. (A correct posture would result in the same reading on both scales.)

The contests were a publicity stunt meant to boost the reputation of chiropractors. It was said that a good posture would lead to better health, and chiropractors were there to help with that. 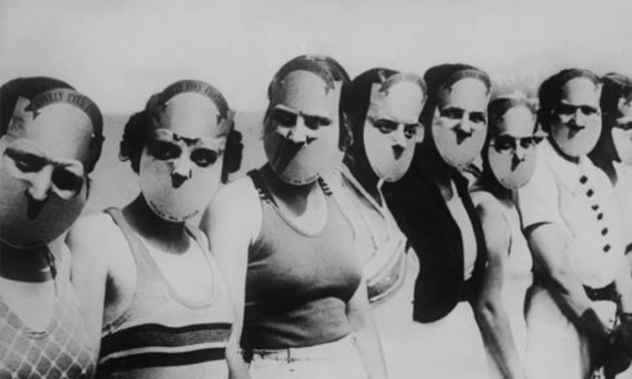 During the 1930s, bizarre contests known as “Miss Lovely Eyes” were popular throughout the United States. During these contests, all of the contestants’ features, except for the eyes, were isolated, sometimes with incredibly creepy masks. These terrifying masks supposedly gave the judges a chance to objectively decide whose eyes were the prettiest without getting distracted by other features.

A couple of decades later, the strange contest made a brief comeback with the “Beautiful Eyes” contest held at a British holiday camp. The contestants were given their own numbered stalls, which hid their bodies completely. They also had their faces covered with a yashmak. The contest was filmed, and the excited announcer even claimed that if the contest caught on, “We might well have competitions for beautiful ears, or even noses!” Thankfully, his excited predictions did not come true. 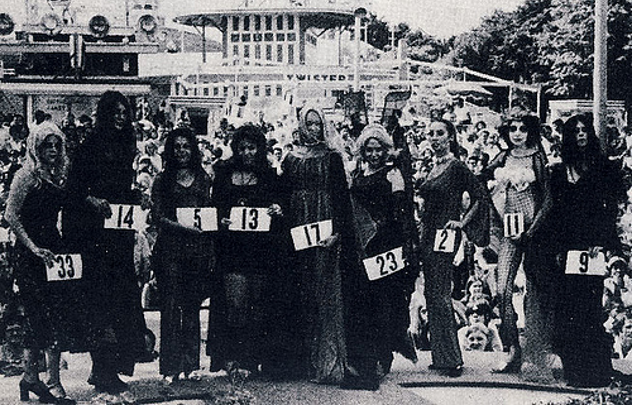 Photo via Dark Shadows in the Press

In 1970, the “Miss American Vampire” competition was conducted as a promotional tool for the feature-length horror film House of Dark Shadows. Regional contests were held all around the US, with New York City and Los Angeles gaining the most interest from competitors. The contest was concluded in California with Sacheen Littlefeather as the national winner.

Girls between the ages of 18 and 25 were asked to come up with the most imaginative “vampire look” with originality, charm, and poise. Unusual and even shocking costumes and makeup were advisable.

Some costume suggestions included a white, delicate shroud for the newly “initiated” vampire, a tight black shroud for the more sophisticated creature of the night, and necklaces made of teeth. Stage presence and videogenic qualities were also important, since the winner of the contest earned a week-long role on the television show Dark Shadows. 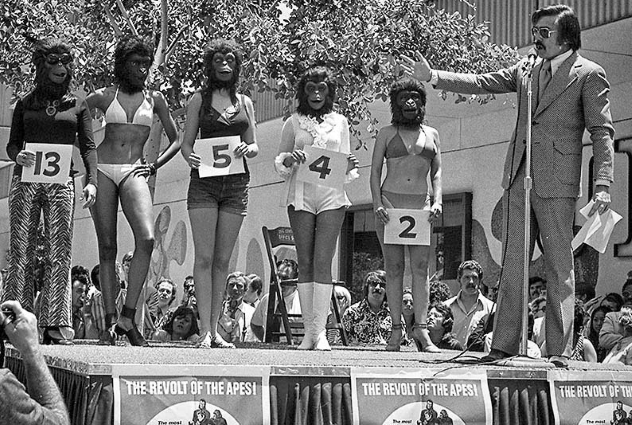 The “Miss Beautiful Ape” contest took place in 1972 and coincided with the release of the film Conquest of the Planet of the Apes. The contest was run by radio and TV personality Gary Owens.

Most of the contestants of Miss Beautiful Ape were clad in bikinis, and all wore extremely elaborate and realistic ape masks over their heads. The winner of the contest was Dominique Green (contestant number 2), who won a role in the future Battle for the Planet of the Apes film. 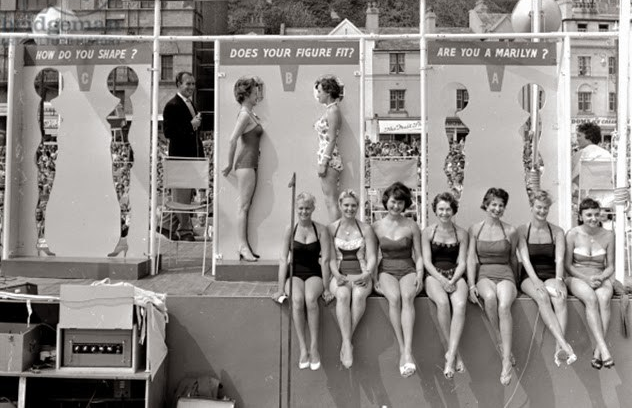 Marilyn Monroe was, and often still is, considered a goddess, sex symbol, and icon. Thus, it should come as no surprise that back in the day, Marilyn Monroe look-alike competitions were quite popular.

Some were held throughout the United States, such as one that was cosponsored by music and entertainment retailer Sam Goody and Twentieth Century Fox. Not much about this contest is known except that it was held at a Sam Goody outlet. The top prize consisted of a VCR and a one-year contract with the Ron Smith Celebrity Look-Alike Agency.

Other Marilyn Monroe competitions were held outside of the US, such as the one held in Hastings, UK, in 1958. The contestants were measured with Marilyn Monroe cutouts to see if their figures matched that of the voluptuous star. The contestant with the most similar figure to that of Monroe was crowned the winner. 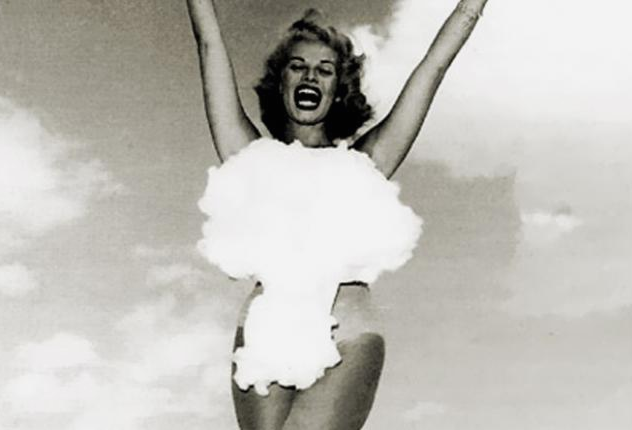 During the 1950s, Americans suffered from an “atomic fever” that was deeply reflected in US culture. It was most prevalent in Las Vegas, since it was only 105 kilometers (65 mi) southeast of the Nevada Test Site. Thus, it was there that “Miss Atomic” beauty pageants became popular.

Such contests included “Miss A-Bomb” and “Miss Atomic Blast.” The latter accompanied one of the earliest atomic blast picnics, held by the hotel and casino El Rancho Vegas. It was won by a showgirl named Candyce King, who sported an atomic bomb hairstyle that required a toilet paper roll and two cans of hairspray. As the queen of the pageant, King was gifted with a 4.5-kilogram (10 lb) bag of mushrooms that represented a mushroom cloud.

However, sometimes, the beauty queens weren’t actually winners of beauty pageants but simply showgirls chosen for their “radiant” looks. This was the case with “Miss Atomic Bomb” and “Miss Cue.” 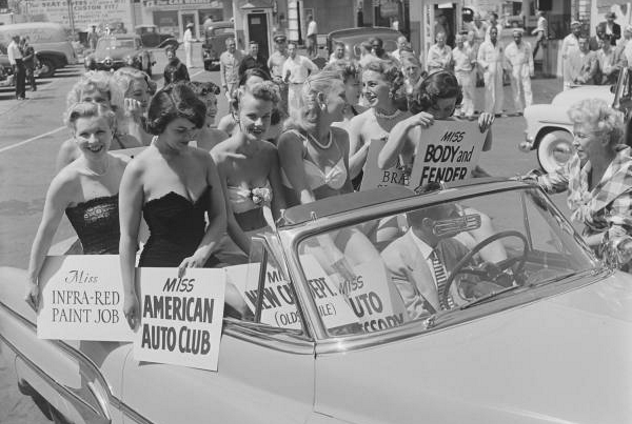 Photo credit: Life Archives via Along for the Ride

Muller Bros. Oldsmobile of Los Angeles, California, was one of the biggest new and used car dealers of its time. Apart from being a car dealer, Muller Bros. was also a tire shop, body shop, auto supply shop, home appliance shop, car wash, and cafe.

The Muller Brothers certainly knew how to attract publicity. In 1951, they hosted a beauty pageant in celebration of the 3,000,000th car to be pulled through their car wash. The beauty pageant attracted quite a crowd, and Life magazine photographer Allan Grant was there to document the event. It is unclear who was crowned the queen of the pageant, but some of the winners included “Miss Lube Rack,” “Miss Polish Job,” and “Miss Auto Accessory.” 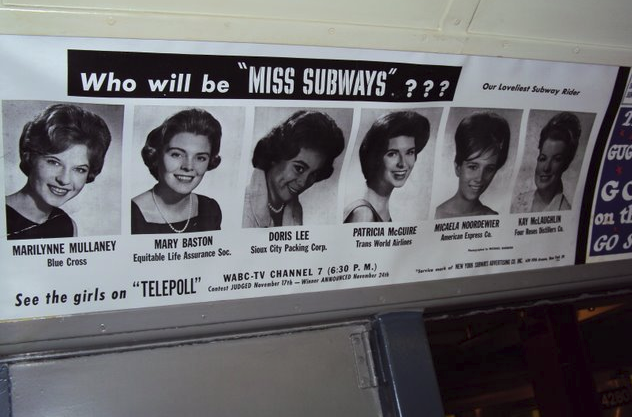 From 1941 to 1976, New York Subways Advertising sponsored the beauty pageant known as “Miss Subways.” To qualify for the pageant, candidates had to live in New York City and regularly use the subway system.

At the beginning, the winners were crowned and photographed by John Robert Powers’s modeling agency. (Powers was a top modeling agent.) Posters of the winner’s photograph as well as a short bio were then stuck on subway cars and buses for everyone to see.

Later, the contestants’ photographs were displayed in the subway, and the commuters themselves could vote for the winner by sending in a postcard with their favorite’s name and later by telephoning. Gazing at pretty faces can certainly make a commute more agreeable. 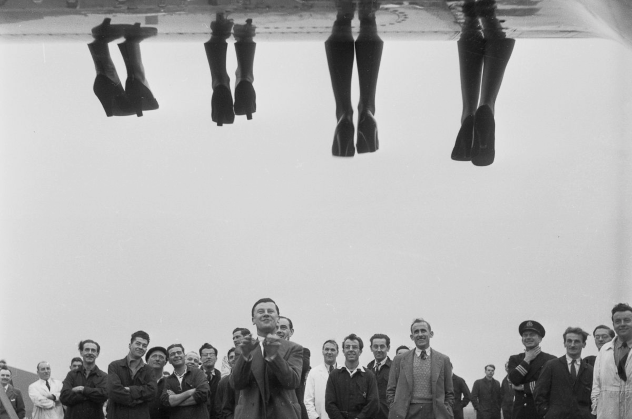 As crazy as it may sound to us today, from the 1930s to the 1950s, “prettiest ankle” competitions were extremely popular both in England and France. Sometimes, these strange contests stood on their own, and other times, they were part of larger pageants in which women’s beauty was judged solely on their ankles, legs, shoulders, and arms.

Ankle and leg pageants were often sponsored by hosiery companies, such as Max Japy, which would gift the winners with free stockings. The contestants of these pageants were concealed behind curtains with only their ankles, and sometimes legs, showing. A judge would then walk up and down examining ankles (and sometimes even touching and measuring them) before choosing a winner.

Supposedly, the best part about these ankle pageants was that even older women could enter them and have as much of a chance of winning as their daughters. 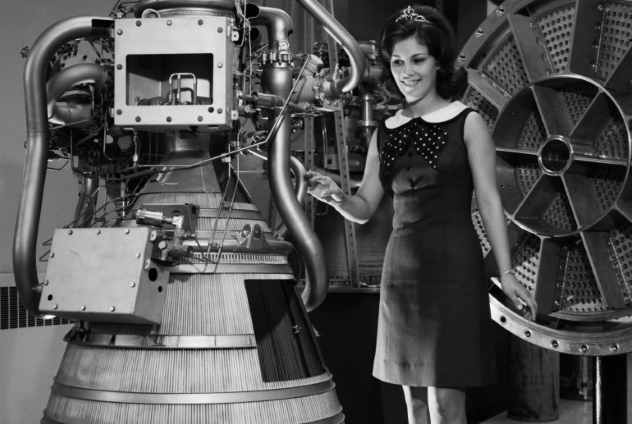 Photo credit: Retronaut via i09

Although the winners of these contests were smiling and posing in photographs, many women did not approve of the pageants. In fact, their disapproval was so strong that during the Lunar Landing Festival Queen contest, a group of feminists swapped the ordinary ballot with a mock ballot, which listed 45 male NASA workers who could be voted as the “King of the court” or the “Boy of the court.”

The men were shocked, security was called, and all the ballots were collected. However, mock ballot results, which portrayed caricatures of the male winners, were distributed by the zealous feminists overnight, deeply upsetting all but one male NASA worker.

Other NASA installations had already ended these space beauty pageants, and shortly after this incident, the Johnson Space Center also put an end to their annual Lunar Landing Festival Queen celebration.