People have been developing weapons since the first time someone used a rock to bash in someone else’s skull. Since then, the lethality of weaponry and defensive systems has gotten more and more complex. Visions of future technology are already making their debut on the modern battlefield, with more on the way.

Ever since Predator was released, people have imagined a similar form of camouflage to protect troops and vehicles. BAE Systems has developed a technology that might keep a Predator at bay with its new ADAPTIV system.

ADAPTIV uses hexagonal modules to cover the outside of an armored vehicle. These cells adjust their heat and cooling based on the environment to mask infrared sensors and also display thermal images of other objects like vehicles, animals, or the landscape to visually confuse the enemy. This blends the object into the background in real-time, making it virtually invisible via IR heat detection. The hexagonal plates can also display thermal signatures to identify friendly forces by heating specific patterns, shapes, and letters.

The skies are no longer the only refuge for unmanned vehicles now that the modern battlefield has seen the deployment of the Modular Advanced Armed Robotic System (MAARS). The MAARS is a small, tracked vehicle mounted with configurations of weaponry. It features motion detectors, day/night vision cameras, a hostile fire detection system, and many more devices to make it a versatile killing machine.

Similar to the MAARS, the Black Knight looks like a small tank and acts like one. It is a small, versatile, armored vehicle capable of operating in the same manner as a full-size tank but without the human operators having to sit onboard. This allows for greater maneuverability without the risk to a human crew, which is normally four per tank. 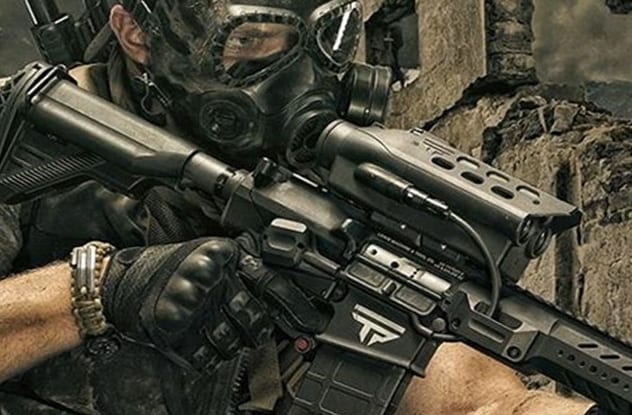 The development of computerized rifles has been in play for over 20 years without coming to fruition. Large computer systems and cumbersome batteries made the devices improbable, but that issue is no longer a concern with the Mile Maker.

The Mile Maker is a smart rifle equipped with a computer system capable of determining the exact location a bullet will hit. It accomplishes this by taking measurements of wind speed, temperature, and other atmospheric data to calculate the precise location and not the optically viewed location a sniper might see. This takes a lot of work out of the hands of the sniper and places it in the rifle allowing for more precise shots over a shorter period of time. This advancement allows for personnel not trained as snipers to achieve approximately 70 percent of their shots up to a mile, which is an amazing feat for any marksman. The weapon can also connect to a wireless device to support a video feed so support personnel and commanders can see what the rifle sees.

We like to call them lasers, but the Department of Defense in the United States called them “Directed Energy” weapons. These new systems being tested in the battlefield are exactly what you think they are: laser guns capable of shooting down missiles, drones, and even sinking other ships.

The LaWs is a 30-kilowatt laser, which was recently installed aboard the USS Ponce to test its efficacy on the water. The weapon system’s designers have lofty goals for the project, hoping that once the technology is perfected, it will be able to replace all line-of-sight weapons in military inventories. As advancements continue and it is made smaller and more energy-efficient, it can be placed onto planes and replace missiles. At a cost of only $0.59 per shot, the LaWS is not only more efficient as a line-of-sight weapon, it is far less expensive than traditional kinetic weapons.

While US Navy is working hard to put the LaWS into action, researchers at Jefferson Labs in Virginia are working even harder to make it obsolete. The Free Electron Laser project aims to create a new type of directed energy weapon capable of achieving a 1-megawatt beam. That would be able to melt through 20 feet of steel per second once it becomes operational.

Affectionately referred to as the Navy’s future death ray, the FEL works differently from the LaWS and other traditional Laser systems. The FEL operates on multiple wavelengths at the same time by injecting free electrons into the beam, allowing for an extremely powerful blast. The research team recently achieved the milestone of 500-kilovolts, making their goal of a megawatt-class weapon only a matter of time. 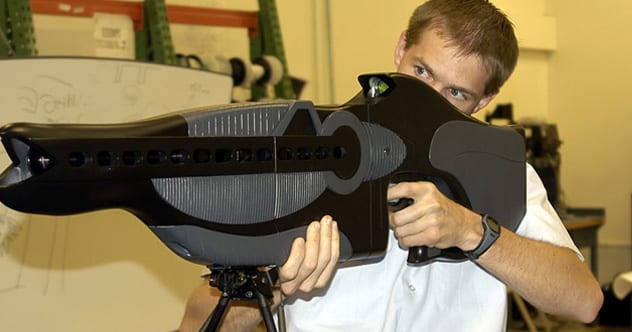 Ever since Star Trek first premiered, we have dreamed of getting our hands on real phasers. Finally, that dream has become a reality with the Personnel Halting and Stimulation Response (PHASR) Rifle. It may not be able to disintegrate a target, but it certainly can stun one.

The PHASR is a self-contained rifle capable of stunning an enemy by confusing their ability to see via two non-lethal lasers operating on separate wavelengths. The beam has a dazzling effect on the target, making them temporarily blind. The PHASR incorporates a second laser to act as a safe range-finder so the operator can hit the target at close or far-off range without harming their own sight.

Watch the US Navy’s laser weapon in action

A rail gun uses no propellant to launch a projectile and instead uses a series of magnets between two conductive rails to push a projectile toward a target. This allows a projectile to be shot out of the rail gun at incredibly high speeds. The projectiles are launched so fast, they are expected to be able to hit targets up to 110 miles away at speeds of more than 10,000 kilometers (6,000 mi) per hour.

Not wanting to be left behind in the technological game of warfare, the United States Army is also hard at work developing its own directed energy weapon systems. The High Energy Laser Mobile Demonstrator (HEL MD) is a solid state laser operating at 10-kilowatts aboard a tactical vehicle. It is capable of tracking, targeting, and firing with pinpoint precision within seconds of identifying potential threats such as mortars, rockets, and UAVs.

Because the system is mounted on a truck and carries its own power supply, it is able to fire more shots, more accurately, and at a much lower cost than any kinetic weapon systems currently in the Army’s inventory. Future plans for the system are to make it more rugged, smaller, and boost its power to 100-kilowatts. 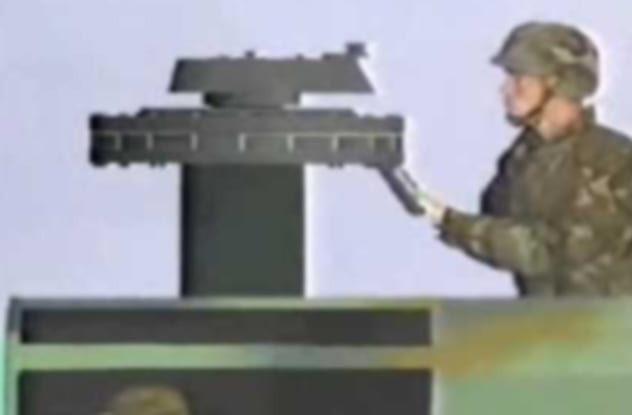 The proposed “DREAD” gun works by spinning a disk at very high speeds so that it imparts its kinetic, centrifugal energy onto a bullet it then fires toward a target. It is capable of firing up to 120,000 rounds per minute of .308 and .50 caliber balls up to 8,000 feet per second. Without a propellant, the weapon has no recoil or muzzle flash making it an ideal replacement to the traditional vehicle-mounted machine gun. 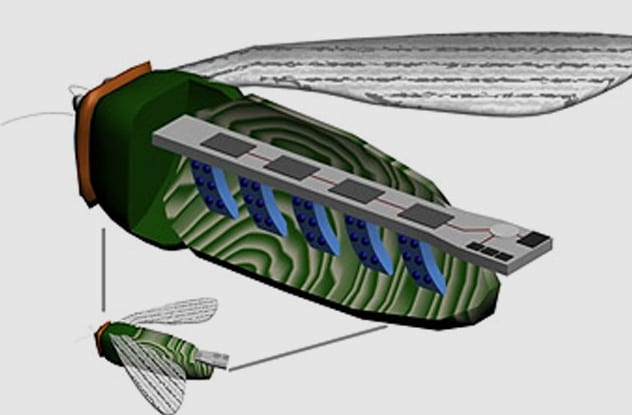 The Defense Advanced Research Project Agency (DARPA) is hard at work to combine the intricacies of modern electronics with the usefulness of insects. The Hybrid Insect Micro-Electro-Mechanical System (HI MEMS) is exactly what it sounds like: insects implanted with electronic circuitry capable of stimulating their muscles via specific targeted electrical impulses to turn them into GPS-guided bugs.

These new cyborgs could be used as literal bugs in surveillance missions anywhere in the world. Electronics are implanted into the subjects prior to their metamorphosis stage allowing tissue to grow over and around them. This allows the implantation of one or more sensors like a microphone or even a tiny camera. Early testing has been highly successful: “Living, adult-stage insects have emerged with the embedded systems intact.”