The Victorian era left us feeling like sex scandals are a new thing. But our ancient ancestors actually put us to shame when it came to high-profile immorality. Their sex scandals were often interlaced with conspiracy, murder, and executions—raising the stakes for powerful ancients caught in compromising positions. 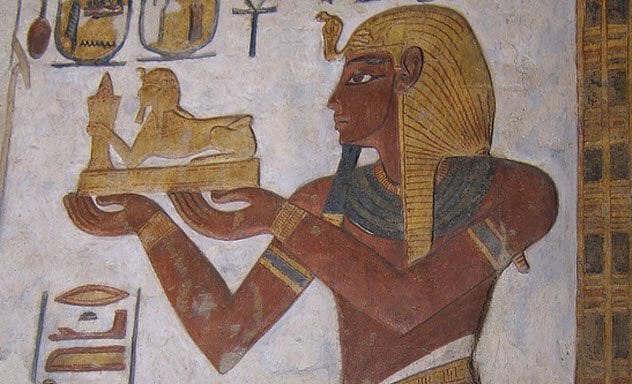 Around 1155 BC, Pharaoh Rameses III of Egypt was murdered in a conspiracy led by his wife, Tiye. His successor Rameses IV set up a commission of 12 judges to investigate the plot. The judges discovered that Tiye’s conspiracy had included numerous court officials and concubines, all of whom were put to death.

However, the trial itself was soon disrupted by a sex scandal when it was revealed that three of the judges had been seduced by women linked to the conspiracy. According to the ancient trial records, “the women . . . found [the judges] where they were. They had a fine party down there with them.”

Of the three judges involved, May had his nose and ears cut off while Pabes “was punished by leaving him [to himself]. He took his own life.” Hori was only reprimanded, probably because he testified against Pabes and May.

9A Dark Temple And A Dog Mask 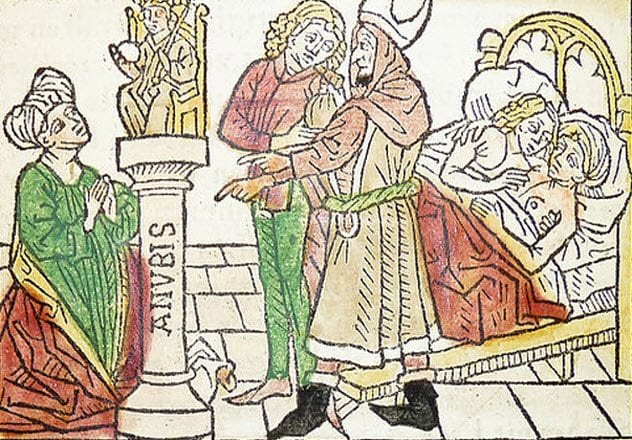 During the reign of Tiberius, Rome was rocked by a particularly strange sex scandal. According to Josephus, a nobleman named Decius Mundus had the hots for a married woman named Paulina. He even offered her 200,000 drachmas to spend the night with him, but the respectable Paulina refused.

Decius wasn’t going to give up that easily. He knew that Paulina was a devoted follower of the Egyptian gods. So he bribed the priests of Isis to tell Paulina that the god Anubis wished to appear to her. Paulina obligingly came to the temple at night, where Decius was disguised as the dogheaded Anubis.

In the darkness, Paulina apparently bought that Decius was Anubis and “performed a night-long service for him.” A few days later, Decius told her the truth, bragging that he had saved 200,000 drachmas. Horrified, Paulina complained to the emperor. The priests were crucified, and the Temple of Isis was burned down. But Decius was only exiled.

8The Scandal That Ended A Country 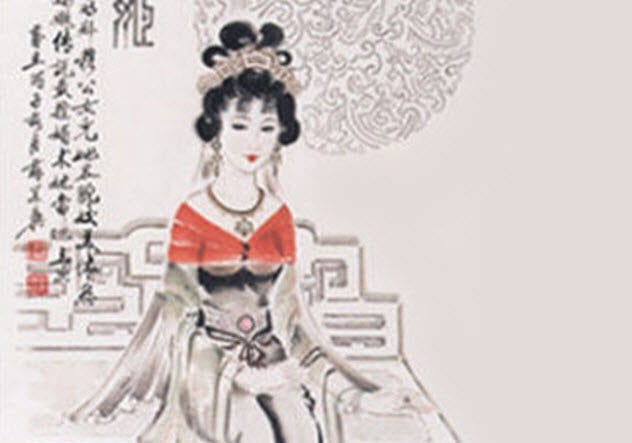 In ancient China, a notorious sex scandal destroyed the state of Chen. According to the Commentary of Zuo, the married Xia Ji was having affairs with Duke Ling of Chen and two of his ministers, who frequently wore her underwear under their clothes. All three openly bragged about the relationship, which enraged Xia Ji’s son Xia Zengshu.

In 599 BC, the three men were drunkenly partying at Xia Ji’s house when Xia Zengshu appeared. Duke Ling turned to one of his ministers and joked that the young man looked suspiciously like the minister. “He also looks like you,” the minister joked back. At which point, Xia Zengshu snapped and murdered the duke.

In the chaos, the two ministers escaped and fled to King Zhuang of Chu, who used the incident as an excuse to conquer Chen. Xia Zengshu was executed, and all China learned a valuable lesson about “your mom” jokes.

7The Crush That Destroyed A Tyrant 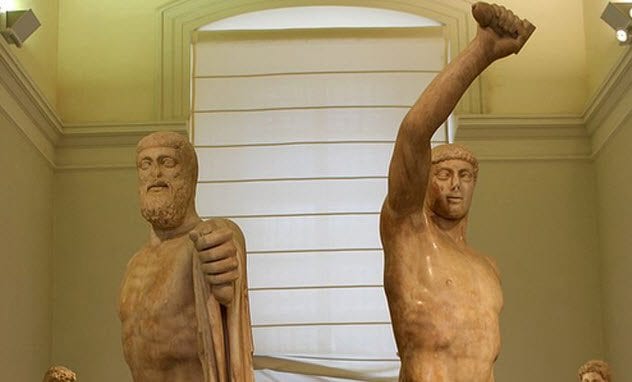 The brothers Hippias and Hipparchus became co-tyrants of Athens after their father died in 527 BC. But trouble broke out when Hipparchus became infatuated with the handsome youth Harmodius. Of course, in ancient Greece, this was no scandal. What was shocking was that Harmodius was already in a relationship with a man named Aristogiton; Hipparchus was trying to use his power to split up the couple and become Harmodius’s new lover.

With no other options, Aristogiton and Harmodius decided to go out in a blaze of glory. During the crowded Panathenaea festival, they approached Hipparchus and stabbed him to death. The tyrant’s guards cut down Harmodius, while Aristogiton was tortured and executed. The Athenians later erected a statue of the lovers, honoring their blow against tyranny.

6The King Who Wanted People To Ogle His Wife 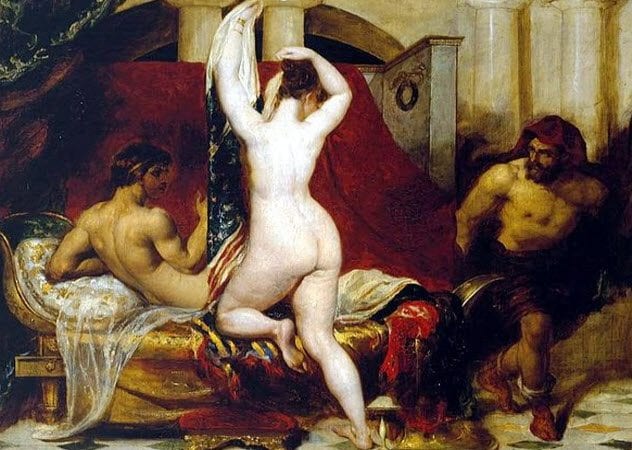 Candaules was king of Lydia, a powerful kingdom in what is now western Turkey. According to Herodotus, Candaules was a bit of a creep who was always bragging about his hot wife. In 718 BC, he asked his bodyguard, Gyges, if he wanted to see the queen naked.

Gyges sensibly declined. But Candaules insisted, telling Gyges to hide behind the door of their bedroom so that he could watch the queen get undressed. Unfortunately, she spotted Gyges. And she was furious.

Learning what her husband had done, she gave Gyges a choice: Kill Candaules and marry her, or she would publicly accuse Gyges of spying on her, forcing Candaules to execute Gyges. Unsurprisingly, Gyges chose the first option. That night, Candaules entered the bedroom and was stabbed to death by Gyges—who had been hiding behind the door again. 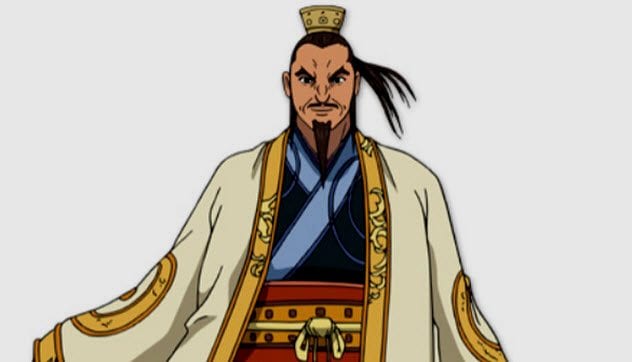 An unusual scandal broke out early in the reign of Qin Shi Huang, who would become the first emperor of all of China. His mother, Queen Zhao, had a long-term affair with the minister, Lu Buwei. However, it was difficult for Lu Buwei to sneakily visit the queen, who became sexually unsatisfied.

So the pair tracked down a man named Lao Ai, who was known for his huge penis. (His party trick was putting a wheel on it like an axle.) After Lao Ai agreed to become the queen’s lover, Lu Buwei faked Lao Ai’s castration and plucked out his hair and beard so that he could pretend to be a eunuch.

Lao Ai was then sent to serve the queen. As a eunuch, he could enter the women’s quarters without suspicion, where he engaged in much “immoral behavior” with Queen Zhao. The ruse was eventually discovered, and Lao Ai was executed, along with three generations of his family. Lu Buwei and Zhao got off with banishment. 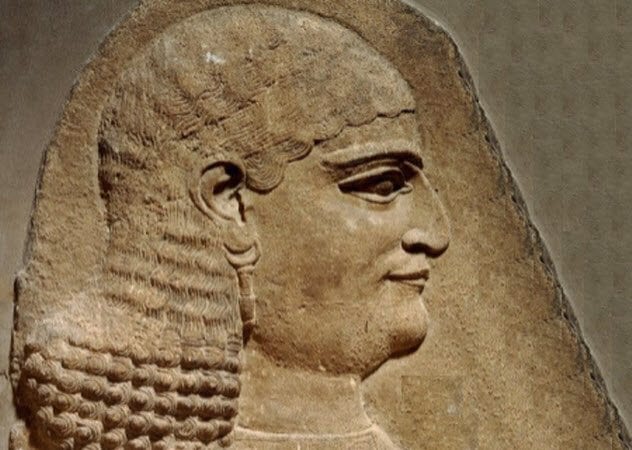 Gadatas had a problem we can all sympathize with: He was just too sexy. According to Xenophon, Gadatas was a hot young nobleman who served Nabonidus of Babylon. One day, one of the king’s concubines started flirting with Gadatas, saying that his fiancee was lucky to be marrying such a handsome man. To make matters worse, Gadatas started flirting back.

This was a bad move. The king immediately ordered that Gadatas should be castrated for his insolence, making him unlikely to flirt with any more concubines. Gadatas later got revenge by defecting to Cyrus the Great and handing key fortresses over to the Persians.

3Crassus And The Virgin

Marcus Licinius Crassus was one of the richest men in history and one of the most powerful figures in Rome. So when he got caught up in a sex scandal, it was big news. It was a particularly juicy scandal, too. Crassus was accused of trying to seduce a Vestal Virgin.

The Vestals were an order of priestesses who swore chastity, so trying to get one into bed was a major crime. Fortunately for Crassus, he had the perfect alibi. He explained that the Vestal in question owned a really nice villa. The only reason he was always hanging around and flattering her was because he wanted her to sell it to him cheap.

Since Crassus was famously greedy, the court bought the story and acquitted him. As Plutarch put it, “It was his avarice that absolved him from the charge.” 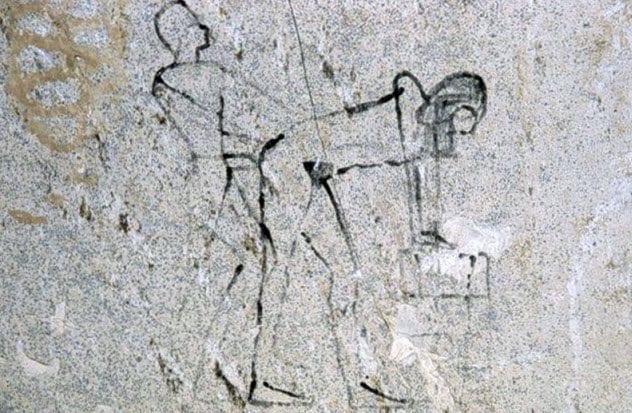 Of course, it’s hard to know for sure what people thought of sex scandals in the ancient world. One interesting example comes from the reign of Hatshepsut, the most famous female pharaoh of Egypt. It was rumored that Hatshepsut was having an affair with her courtier Senenmut.

Apparently, the rumor was popular at the time since a worker seems to have graffitied it on a wall at Deir el Bahri. The graffiti depicts a figure who may be wearing pharaonic headdress being penetrated. The figure is somewhat androgynous, having no breasts or penis. This might suit Hatshepsut, who was often depicted with a fake beard. 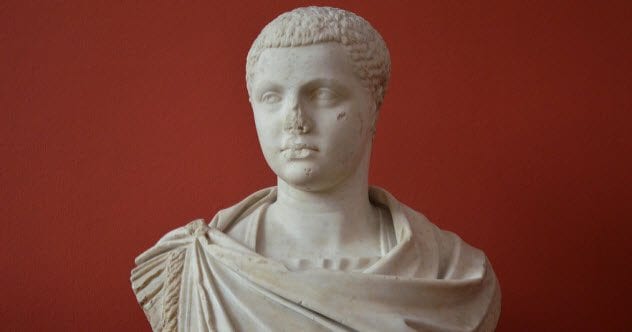 The Roman Emperor Elagabalus’s whole life was a scandal. Levered into power at age 14 by his grandmother, the teen soon spiraled out of control. Over the next few years, he married at least five wives and one husband, a charioteer named Hierocles.

Cassius Dio claims that Elagabalus set up a mock brothel in the palace where he stood “nude at the door of the room . . . while in a soft and melting voice he solicited the passers-by . . . men who had been specially instructed to play their part.” He enjoyed letting Hierocles catch him at this so that Elagabalus could “be violently upbraided by his husband and beaten until he had black eyes.”

Dio also claims that Elagabalus often referred to himself as a woman and offered a reward to any surgeon who could give him a vagina. It’s hard to be sure how many of these stories are true, but accounts of the time agree that Elagabalus was plagued by sex scandals. Sensing that public opinion was souring, his grandmother eventually orchestrated a coup and replaced him with his cousin.