Curses are as old as mankind. For millennia, people have wished misfortune on their enemies, often in the form of pleas to supernatural and divine forces. With elaborate rituals, prayers, and language, curse casting has often been a profession. Objects can also hold curses—especially human remains. 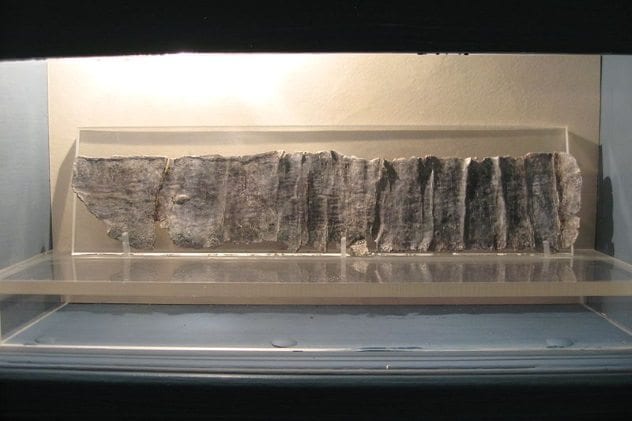 In 1986, archaeologists unearthed a curse tablet during excavations of the ancient Macedonian capital of Pella. Created between 375 and 350 BC, the Pella tablet is an inscribed lead scroll. The writer, Dagina, calls upon divine powers to solve her problem: Her beloved, Dionysophon, is on the precipice of marriage to another woman. Dagina wants him for herself and beseeches the gods for assistance in love.

The language on the stone is far removed from the stately language of the ancient Macedonian court, so linguists believe that Dagina was of a lower social stratum. The tablet has confirmed their suspicions that her Macedonian vernacular derived from Doric Greek.

Also known as “binding tablets,” invocations like the Pella tablet were succinct ways to ask the gods for help—or cast curses. Archaeologists have uncovered 1,600 Greek curse tablets. The Pella tablet is the oldest.

9 The Curse Of King Casimir 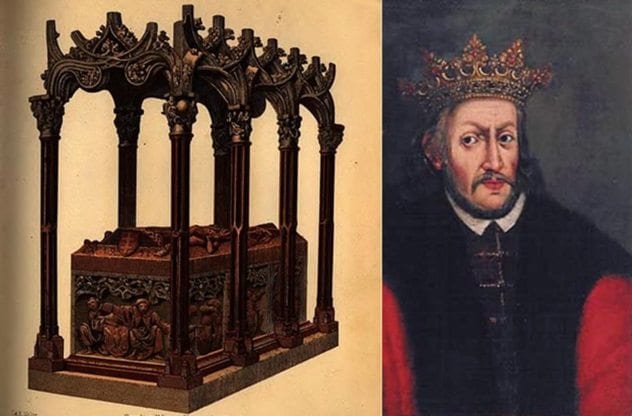 Days after archaeologists opened the tomb of King Casimir IV Jagiellon in 1973, four of the 12 researchers were dead. Over the next few years, more succumbed to cancer and other fatal diseases. By the end of the ordeal, no less than 15 people who had worked with the Polish ruler’s remains were dead. Born in 1427, Casimir defeated the Teutonic Order, regained Pomerania, and established his family as one of Europe’s preeminent dynasties.

When Casimir died in 1492, his corpse decomposed rapidly due to bad weather. Embalmers hastily sealed his coffin with resin, unwittingly creating a pathogenic bomb. The “curse” was actually Aspergillus flavus, a deadly fungus that can be found in ancient corpses and tombs. The fungus attacked everything in its vicinity when the rotten wooden coffin was opened. The same fungus was responsible for King Tutankhamun’s “curse,” which killed several Egyptologists. 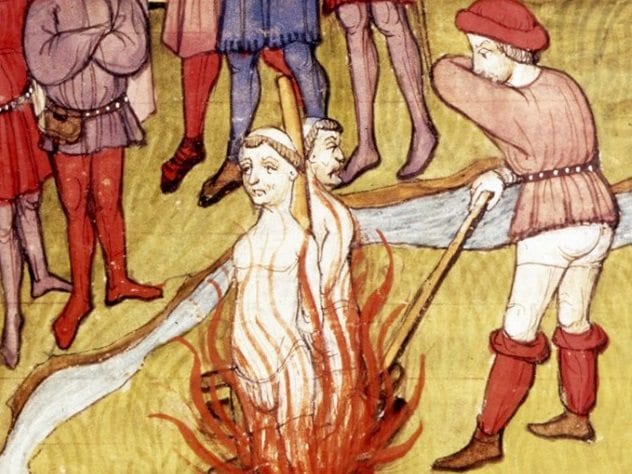 By the 12th century AD, the Knights Templar had become one of the most powerful organizations in Europe. During the Crusades, they amassed a fortune, which was used in an early form of banking. According to rumors, they found the lost treasure of King Solomon. After an extended campaign in the Middle East, Jacques de Molay became head of the order in 1292.

King Philip IV of France began borrowing from the Templars—never intending to pay them back. In, 1307 Philip conspired with Pope Clement V, who stripped de Molay of his duties. The Templar master was tortured, imprisoned for seven years, and ultimately burned alive in 1314.

Before dying, de Molay cursed his enemies, claiming that both Clement and Philip would be dead within a year and that Philip’s line would be erased. Clement soon succumbed to a fatal disease. Next, Philip died of a stroke. By 1328, all of Philip’s sons and grandsons were dead.

7 The Curse Of St. Anne’s Well 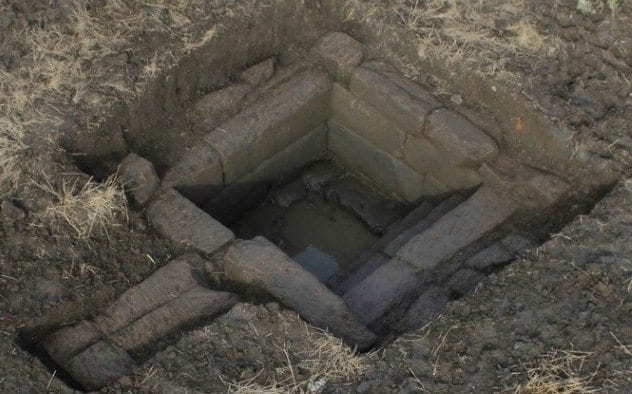 In 2016, archaeologists uncovered an ancient and allegedly cursed well near Liverpool.

The cult of St. Anne was once widespread in medieval England. The mother of the Virigin Mary, Anne is often associated with healing wells. Anne supposedly bathed in the well, which was known for treating skin and eye diseases. For centuries, a nearby priory of 12 monks tended the well.

In the 16th century, dispute raged over access to the well. The priory’s Father Delwaney and his landowning neighbor, Hugh Darcy, both claimed ownership. Darcy predicted that Delwaney would not have access for much longer. Two days later, King Henry VIII’s men seized the priory and the well.

Delwaney cursed Darcy and, according to legend, fell over dead right after. Within three months, Darcy’s son died of a mysterious illness, and Darcy suffered massive financial loses. A year and a day later, Darcy was found at the bottom of the well with his head crushed in. 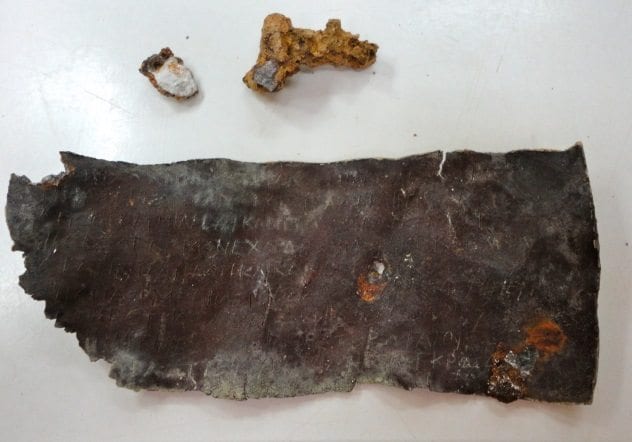 In 2003, archaeologists unearthed the cremated remains of an ancient Athenian woman along with five lead curse tablets. Dated to the fifth century BC, the maledictions were directed toward tavern owners, so commercial rivalry is the suspected motive. Greek tradition held that curse tablets should be deposited underground. The cremated woman may have written the curse tablets, but it’s more likely that her death provided the spell caster an opportunity to convey the curse to the underworld.

The sophisticated language of the curses suggests professional manufacture. Unusually, the writer implores Artemis, who is specifically associated with protecting women and girls. Four of the five tablets had inscriptions, all targeting different tavern owners. One was left blank. All were hammered through which a nail, which reinforced the tablets’ content. 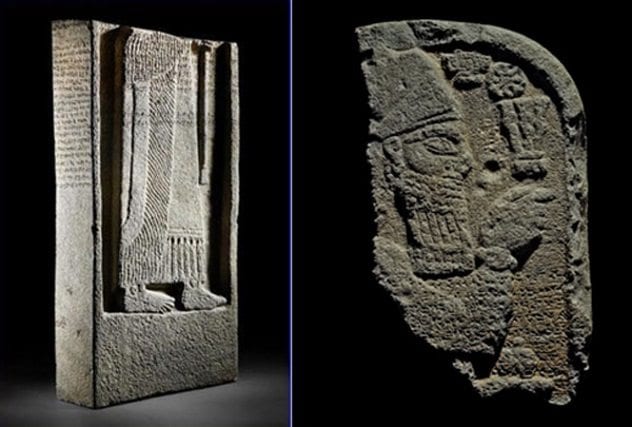 In 1897, during excavations of the ancient city of Dur-Katlimmu, archaeologists discovered a basalt stele containing an Assyrian curse. Dated to 800 BC, the artifact is now in two pieces. The British Museum houses the top, while the bottom was put up for auction. There are no plans to reunite the pieces of the “cursed” stele. The complete object would have stood just over 2 meters (6.6 ft) tall. It depicts King Adad-Nirari III surrounded by sacred symbols.

The cuneiform inscription asks the god Salmanu to watch over Adad-Ninari, his priesthood, and the Assyrian people, while scattering and destroying his foes and adversaries. The message encourages future rulers to watch over and protect the king’s temple and threatens anyone who would dare remove the object from its rightful home.

Assyrians were masters of propaganda, and steles of this nature were once common. They were used to intimidate foreign emissaries, represent royal authority, and ward off rivals.

4 The City That Jesus Cursed 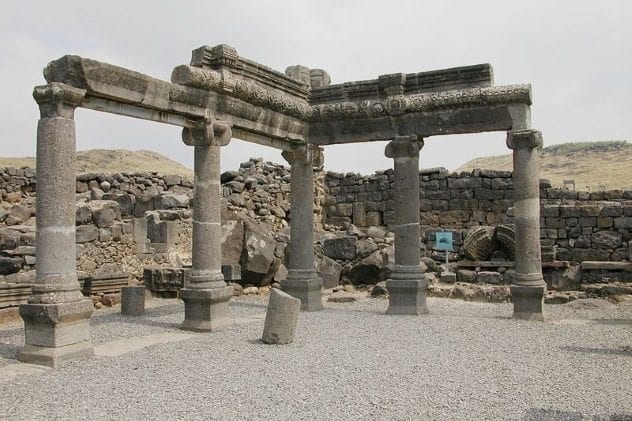 According to the Gospels of Luke and Matthew, Chorazin was one of three cities that Jesus cursed. In the texts, Jesus visited the Galilean settlement many times. Its inhabitants witnessed his miracles but failed to accept him or mend their wicked ways. However, this wouldn’t have been enough to elicit Old Testament–style wrath from the Prince of Peace.

In the late 19th century, archaeologists unearthed an ancient synagogue at Chorazin. The temple was constructed from black basalt with a Seat of Moses carved from a monolithic black stone. The temple also had snake-headed gorgon carvings. According to Jewish tradition, the Antichrist would rise from this cursed city.

According to the historian Eusebius, by AD 330, the city had already been completely decimated by an earthquake, which he believed was caused by the Gospel curse. Conversely, there is no evidence to suggest that Chorazin even stood in Jesus’s time.

3 The Wrath Of The Fairies 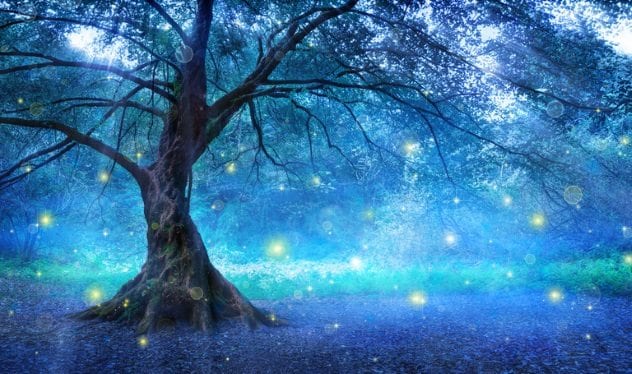 Irish legends warn that a curse will befall a US pharmaceutical company if it builds a factory over a “fairyfort” in Waterford. Dated to AD 800, the fairyfort is an Iron Age ring fort. These circular settlements were farmsteads. Their earthen and stone banks served as protection from animals and intruders. Centuries later, the Irish attributed the forts to magical inhabitants like fairies and leprechauns.

West Pharmaceutical Services is ignoring the curse and building their new facility over the ring fort. Workers needed to be brought in from distant regions, as locals have simply refused to help. West Pharmaceutical is aware of the archaeological value of the location and is working with the National Monuments Office to excavate the site prior to construction. However, some believe that this is not enough. According to those knowledgeable of Irish lore, it is not a question of “if,” but “when,” the factory will shutter.

2 The Croesus Treasure’s Trail Of Misery 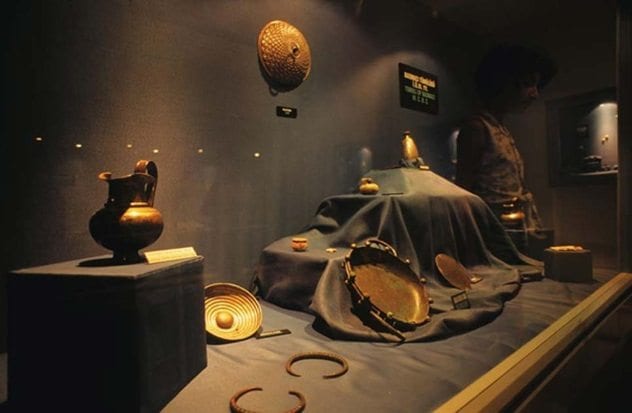 In 1965, villagers discovered treasure in a tomb in Western Turkey. The 363 silver and gold objects were dubbed the “Croesus Treasure,” after the sixth-century-BC Lydian king. (The hoard is also referred to as the Karun Treasure.)

Soon, misfortune struck, leading many to believe that the treasure was cursed. One grave robber lost three children to violent deaths. Another was paralyzed. A third went through an ugly divorce, and his son committed suicide. The last thief went insane and spent years telling people of 40 barrels of gold that he’d hidden.

New York’s Metropolitan Museum of Art purchased the treasure. They displayed the hoard as “Greek” to cover up its origin. In 1987, three days before the Met would have rightfully owned the haul, the Turkish government took steps to get the treasure back. After a six-year legal battle, the Met admitted that they knew the treasure was stolen. The Croesus Treasure was returned to Turkey.

1 The Curse Of The Sarcophagus 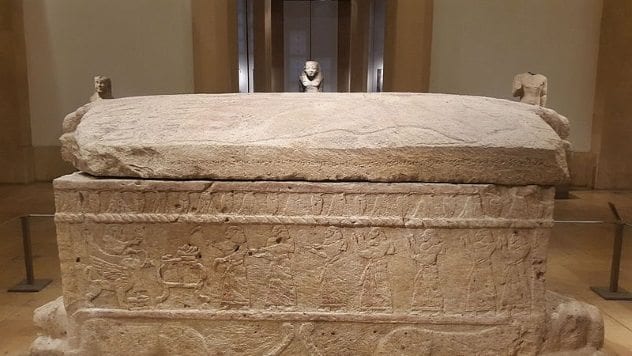 In 1923, archaeologists unearthed the cursed sarcophagus of King Ahiram during excavations of the ancient Phoenician city of Byblos. Rains caused a hill to collapse, revealing nine rock-cut tombs of Phoenician kings. Dated to roughly 1000 BC, Ahiram’s limestone sarcophagus is the only evidence of this mysterious king.

The sarcophagus’s inscription has fascinated scholars for decades. It reveals that it was constructed by Ahiram’s son, Ittobaal, and provides a curse to protect it from grave robbers. Unfortunately, it didn’t work. By the time archaeologists stumbled upon the find, the tomb had already been looted.

The inscription is also considered the oldest known example of the fully developed Phoenician alphabet, with 19 of the 22 Phoenician letters present. Egyptian culture and religion had a major impact in Byblos. However, Ahiram’s sarcophagus reflects a uniquely Phoenician style. The dress, beard, and hair suggest origins in Northern Syria rather than Egypt.