Gingerbread houses tend to abound during the holiday season. Not all of the ginger-flavored molasses cake buildings are simple residences, though. Some are gigantic constructions built by teams using hundreds of kilograms of confectionery of all types. These chefs spend long hours baking and assembling their gingerbread creations, but in the end, they all agree that the joy their creations bring to them and others makes their labors of love worthwhile. These ten elaborate gingerbread houses indicate why they felt this way. 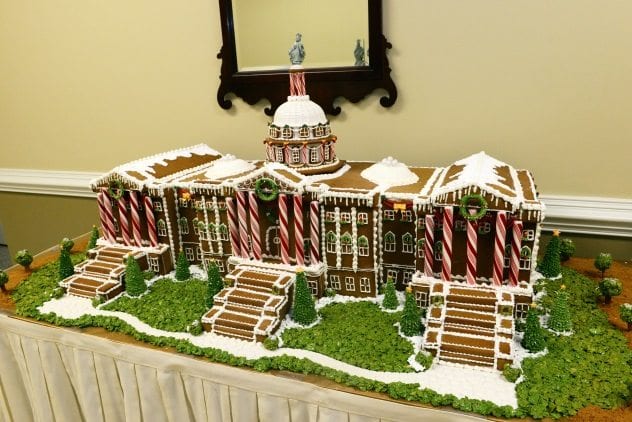 Photo credit: Lisa Ferdinando, ARNEWS via the US Army

In 2013, the US Capitol building occupied the entrance to the Pentagon’s Army Executive Dining Facility. Made of licorice garland and candy adornments and decorated with icicles of sugar and melting drifts of “snow,” the replica building was 1.4 meters (4.5 ft) long and 0.9 meters (3 ft) wide and weighed over 23 kilograms (50 lb). Finishing touches included a lawn of green-dyed, crushed cornflakes mixed with melted marshmallows and inverted ice cream cone trees, tiny candles in the windows, and miniature wreaths made of green icing and festooned with red icing bows. Candy canes doubled as columns, and a Statue of Freedom carved by Sergent Kyoungmin Park topped the gingerbread building’s dome.

The Capitol was designed by Specialist Samantha Poe, whose family includes several engineers. Before joining the Army, Poe was a chef at five-star restaurants, and she enjoyed the mathematics that went into designing the gingerbread building to correct scale and proportions. Sergent Rose Picard, a pastry chef, assisted in assembling the gingerbread building. The project took the soldiers six days to complete, constructing it in addition to their regular duties. The Capitol impressed generals, who came to shake the soldiers’ hands. 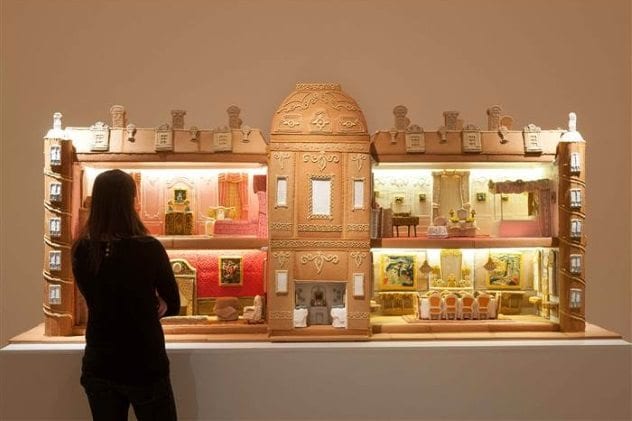 In 2016, a team of Biscuiteers (a London cookie boutique) employees spent an astonishing 500 hours constructing a huge cutaway gingerbread replica of Waddesdon Manor, a French Renaissance–style chateau in Buckinghamshire. The gingerbread edifice showed off several splendid rooms, each constructed in astonishing detail.

The pink guest bedroom was furnished with a chest, a vanity, and a canopy bed. The paneled walls were decorated with carved wall molding and baseboards. There were also paintings, parrot statues, lamps, a mirror, curtains, and an elaborate rug.

The billiard room contained a billiards table, a red love seat complete with pillows, triangular windows with green panes, embossed walls, and a red carpet. The dining room featured a table set for ten, an elegant rug, a plank floor, and sideboards and was decorated with paintings, flower baskets, a clock, and other exquisite touches. 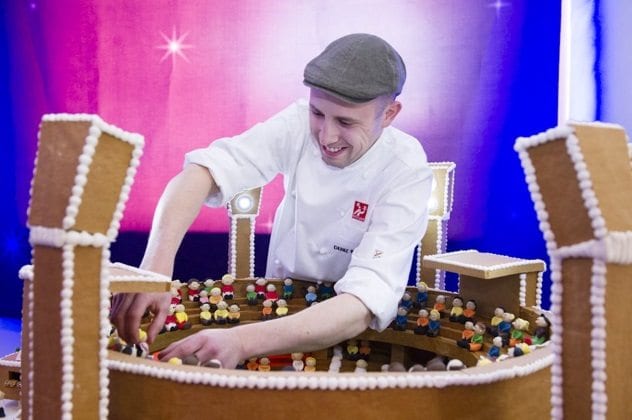 To create the gingerbread village that occupied the lobby of Melbourne’s town hall in December 2014, pastry chefs Deniz Karaca and Anna Polyviou enlisted the help of Karaca’s 12-member team and a number of volunteers, who spent 2,000 hours building the tiny town. The backdrop for the village required 800 miniature Christmas trees, according to Karaca. 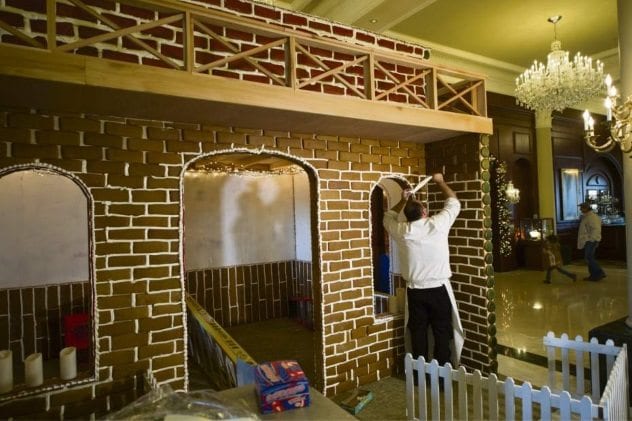 Each year, the gingerbread constructions of Scott Tennant, the executive pastry chef of Nemacolin Woodlands Resort’s Chateau LaFayette, are different. In 2016, he, his staff of ten, and the resort’s carpentry shop joined forces to create a house large enough for adults to enter. The house was edible, and some visitors tried to break off samples. Tenant found “a fingerprint in the piping, or candies missing.”

After the carpenters finished the base for the house, Tennant and his staff took over. After their regular hours, he and his team worked 600 night hours to create the house. Tennant gave away a few of his trade secrets: With a hand saw, he cut notches into cookies before slicing them to size. The resulting discs adorned the edge of a wall. 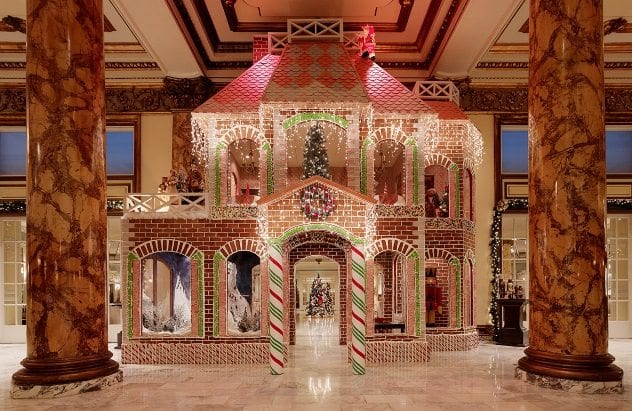 In 2016, a 7-meter (22 ft), two-story gingerbread house was built over a wooden frame in the lobby of the Fairmont Hotel in San Francisco. Chefs added 7,750 pieces of gingerbread as well as hundreds of kilograms of icing and candy. The hotel’s executive pastry chef, Kimberly Tighe, and her staff rebuild the house each holiday season. The construction materials are reused each year, and the uneaten edible parts are composted.

Children often sample the exterior of the house, but repair materials, in the form of peppermint canes, gingerbread men, jelly slices, Christmas tree marshmallows, and gumdrops, are on hand for the twice-daily, four-hour sessions the chefs spend replacing eaten items. The house features a balcony, an electric train that runs in and out of the house, cookie trim, a clock, gingerbread bricks, and icing mortar. 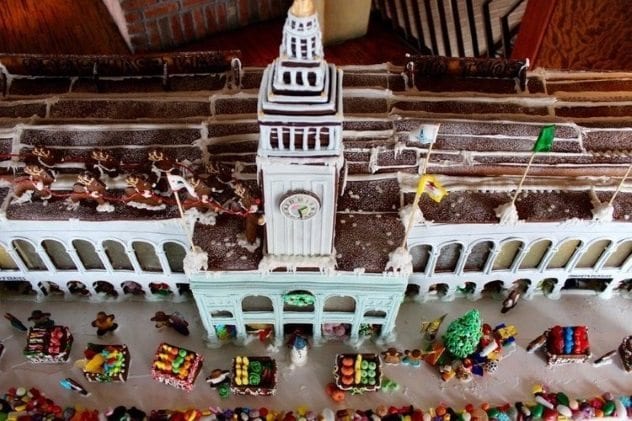 Angela Salvatore, the pastry chef of San Francisco’s Waterbar restaurant, has experience creating confectionery replicas of famous places, including Candlestick Park and the Palace of Fine Arts. But, in 2016, she outdid herself with her latest construction, a 1.8-meter-long (6 ft), 0.8-meter-tall (2.5 ft) tall replica of the San Francisco Ferry Building. Salvatore and her team toiled for 130 hours to create the massive replica.

Cookie reindeer pull Santa’s sled across the gumpaste flag–bedecked rooftop, Rudolph halting inches from the structure’s central tower. Down below, a farmer’s market is in full swing, as vendors sell fruit (aka Runts) and soap (aka Pez) as well as flowers, eggs, and ice cream made of candy. A snowman and a Christmas tree piled high with gifts add touches of good cheer. The gingerbread Ferry House helped to bring more visitors to the Waterbar. 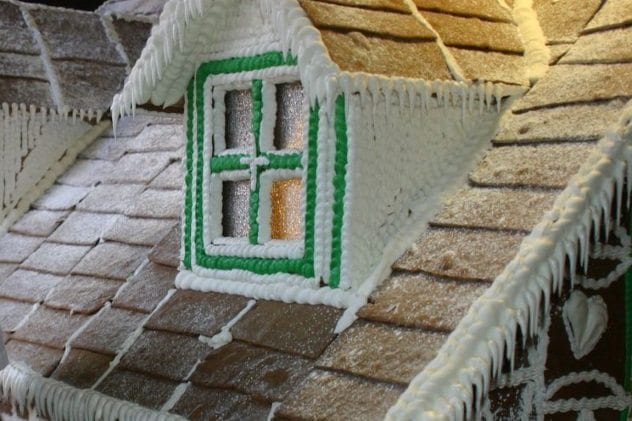 Again, in 2016, the lobby of the Hotel Corque in Solvang, California, was home to a giant gingerbread house created by baker Bent Olsen and his assistant, Louis Rojas. The children’s playhouse–size edifice wasn’t the first that the seasoned baker has created. “He’s been doing this since 1984,” the hotel’s hospitality manager, John Martino, said. For Olsen, variety adds spice to his art. Each year, he changes colors and designs.

The edible ingredients of 2016’s construction weighed 113 kilograms (250 lb). Olsen and Rojas assembled the house, which was then transported to the hotel lobby, where they put on the finishing touches. The house was on display throughout the holidays, and Olsen returned weekly to replace icing icicles that children broke off as samples. 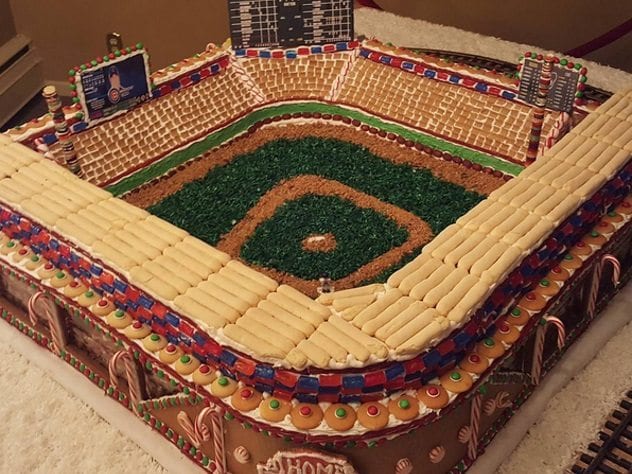 A gingerbread replica of Chicago’s Wrigley Field created in 2016 measured 1.2 meters by 1.2 meters (4 ft x 4 ft) and weighed over 180 kilograms (400 lb). The construction taxed Gerald Madero’s math and carpentry skills and took him and his team 70 hours to complete. One of the trickiest tasks was shaping the walls by adding “curves,” Madero said, and making the gingerbread building work with the structural confines of the baseball stadium’s diamond shape.

Before he became the head chef at the Forest Hills Country Club in Rockford, Illinois, Madero was a carpenter, which helped him to figure out the angles of the stadium’s construction. Complete with a playing field, a gigantic scoreboard, and seating and festooned with peppermints and candy canes, the Home of the Cubs also featured Santa waving from his sleigh. 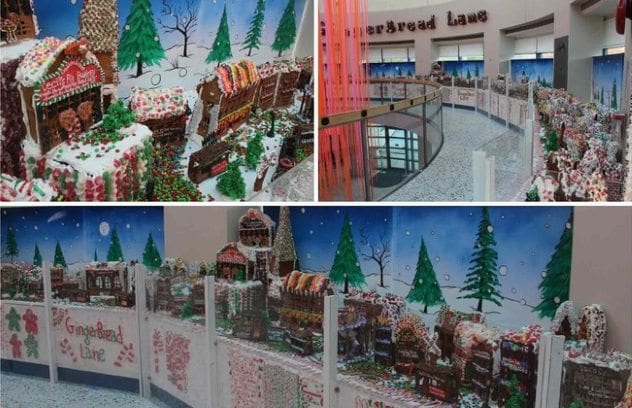 In 2014, his home’s kitchen and dining room were a mess, chef Jon Lovitch admits. They looked as if they’d been visited by Betty Crocker while high on mushrooms. Competing for a world record, Lovitch set out to build the planet’s largest gingerbread village, basing his community on the Clement Clark Moore poem, “A Visit from St. Nick.” His 45-square-meter (480 ft2) town weighed 2.5 tons and occupied a circular platform in the New York Hall of Science. A skylight above the platform brought sunlight to the village, called GingerBread Lane. Independent inspectors examined the complete village and reported their findings to Guinness.

Lovitch’s hard work paid off. His village, containing 1,102 buildings, won him the coveted honor, the third he has collected. Against a background of pine trees, his village wound around the wall of the Hall of Science’s elevated walkway behind a protective transparent plexiglas screen to guard it from children who may have wanted to see it a little too up close and personal. 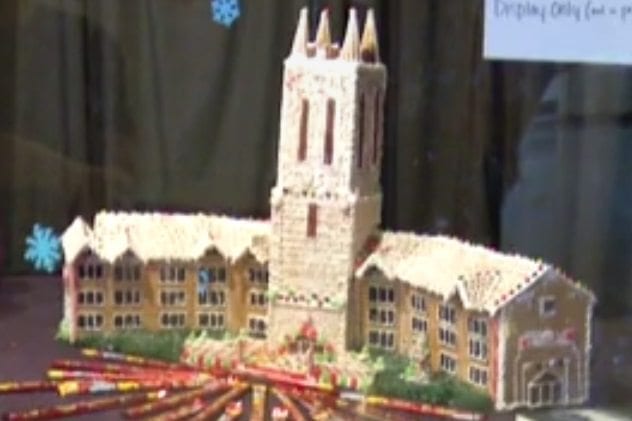 Katie Wood, a Kansas art teacher, gave her place of employment a special Christmas gift in 2016: a gingerbread replica of Topeka High, where she teaches. The school, she said, is “a kind of magical place at times,” where she feels at home among her second family, the school’s students and her colleagues.

The gingerbread high school is 102 centimeters (40 in) long, 76 centimeters (30 in) tall, and 51 centimeters (20 in) wide. It is made of graham crackers, Tootsie Rolls, M&Ms, icing, and other ingredients. Inverted ice cream cones and upright miniature Hershey’s chocolate bars form part of the clock tower’s rooftop.