10 Houses Of Horror So Disturbing They Were Demolished

There are some houses that if the walls could speak, they would likely scream in horror. When a home becomes part of a serious murder investigation, it’s often not long before the murder memorabilia hunters come forward, ready to grab a piece of true crime history. Then, once bodies have been discovered on the site, the ghost hunters and creepy tours will follow shortly after.

The following homes all made such an impact on those who live in the area and the loved ones of victims that there was no other option left but to tear them down to the ground. Not even demolishing them could completely erase their memories, of course. Locals still know what the sites were. 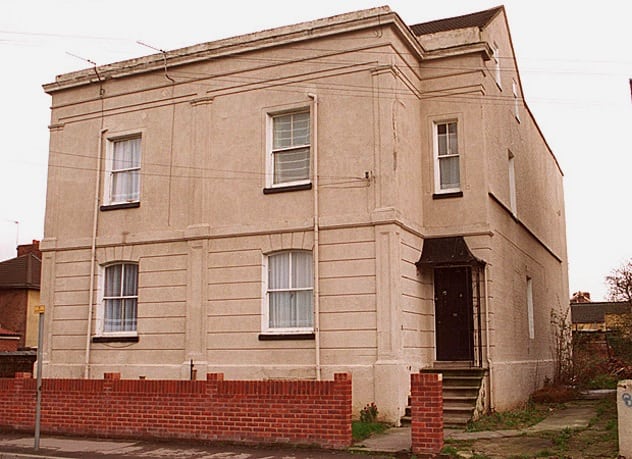 Fred and Rose West will go down in history as one of the worst serial killer duos. They lived at 25 Cromwell Street, Gloucester City, England, and what took place behind closed doors was so disturbing that the home has since been flattened. The sinister couple murdered at least 10 young women together between 1971 and 1987. (Fred killed more beforehand.) The victims were then dismembered and buried in either the cellar or the garden. The two even threatened their children that they, too, would “end up under the patio.”

Behind bars, Fred became depressed when Rose refused to reply to any of his letters, and he took his own life in prison. Initially, Rose denied any knowledge of the murders, but her web of lies soon fell apart, and she was sentenced to life for her involvement.

Two decades after the crimes, Gloucester City Council purchased the “House of Horrors,” as it had come to be called, knocked it down, and turned the former site into a public walkway. Still, nobody will forget in a hurry what happened at 25 Cromwell Street.[1] 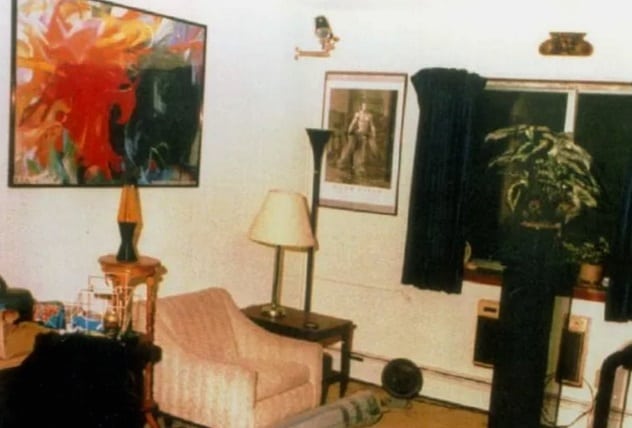 When police officers arrived at the apartment of Jeffrey Dahmer at the 900 block of North 25th Street Street, Milwaukee, Wisconsin, they had no idea they were about to uncover one of the grisliest crime scenes of all time. Dahmer gained his nickname “the Milwaukee Cannibal” after he lured 17 men and boys back to his apartment from 1978 to 1991 with the intention to kill them. Police discovered seven skulls, a human head, and two human hearts in the refrigerator, as well as an entire torso in the freezer, among other remains.

After the crazed cannibal was arrested, his neighbors wished to depart the building as quickly as possible. One explained, “It’s been a living hell. It’s like we’re on a museum tour or a zoo tour. People drive by day and night. I haven’t been eating. I haven’t been sleeping. All I know is I want to get the hell out of here.”[2] The building was demolished in 1992, and the former site of the grisly murders has remained vacant ever since. 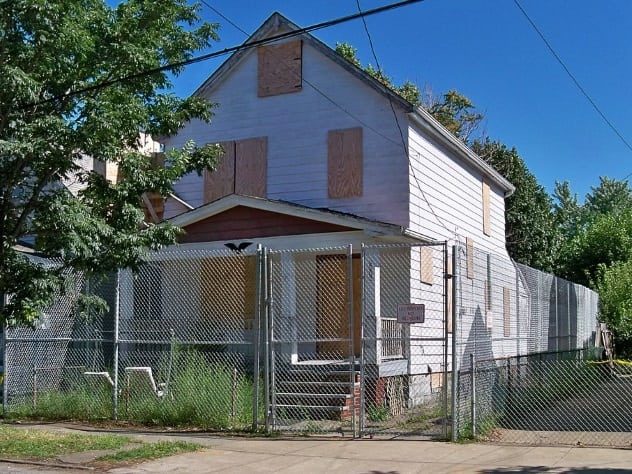 Ariel Castro kidnapped three female victims on separate occasions between 2002 and 2004 when they were aged 14, 16, and 20 years old. He then held them captive at his home in Cleveland, Ohio. The young girls, who grew into women during their decade of hell, were kept in darkness, surrounded by boarded windows and with only a small hole providing any circulation. Castro repeatedly abused them and even fathered a daughter with one of his victims. She gave birth in a small inflatable swimming pool.

In 2013, one of the brave victims was able to escape when Castro failed to secure the “big inside door,” and she screamed a cry of help that alerted the neighbors. Castro was arrested that same evening, but he only lived out one month of his life sentence before he hanged himself with a bedsheet in prison. It took just one hour and 20 minutes for his former home to be demolished as spectators cheered from the street.[3] 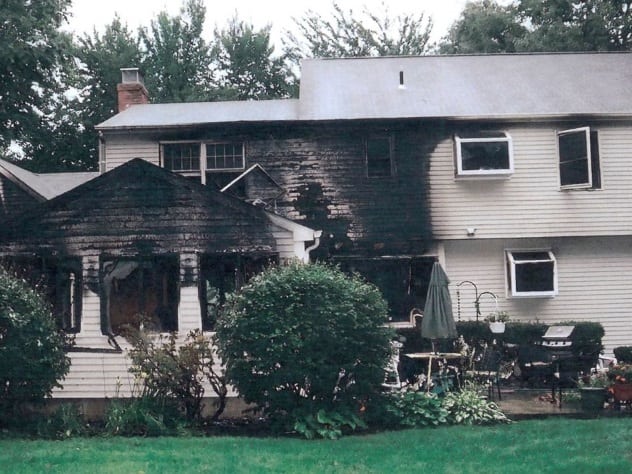 The Petit Family home invasion is so disturbing that it became one of the most widely publicized crimes in the state of Connecticut’s history. In 2007, Dr. William Petit, his wife Jennifer Hawke-Petit, and their young daughters 17-year-old Hayley and 11-year-old Michaela suffered a brutal, random attack at their family home in Cheshire. Perpetrator Steven Hayes and his accomplice Joshua Komisarjevsky broke into the home, first striking William Petit with a baseball bat and then binding the other family members and forcing Jennifer to go with them to the bank and withdraw cash.[4]

She was able to alert the bank teller of the situation, but the Petit family were failed by the responding police officers. As the mother and daughters were brutalized and murdered inside, the police still did not enter, instead focusing on setting up a perimeter around the home. William Petit was able to escape as the perpetrators torched the house. The remainder of the family home was torn down, and the lot is now a memorial garden for the family. 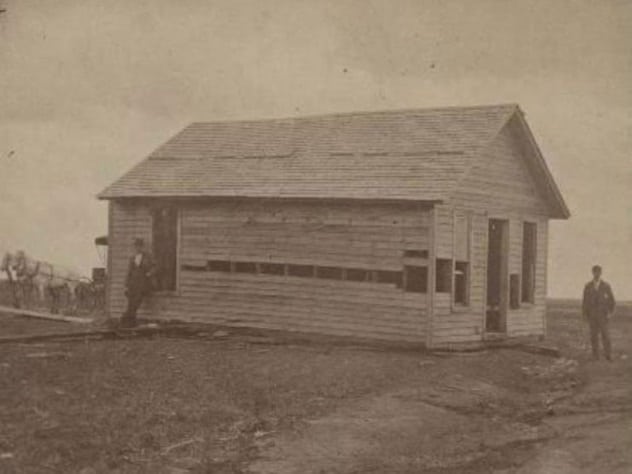 More than 140 years ago, one family committed such evil that they became known as the Bloody Benders. The Labette County, Kansas, family consisted of four people—John Bender, his wife Elvira, and their children John Jr. and Kate. (Some sources claim that Kate was actually John Jr.’s common-law wife.) From 1869 to 1872, he family would invite travelers into their home with the sole intention of smashing their skulls, cutting their throats, and stealing all their possessions. When members of the community noticed the rise in missing persons traveling through the area, they called a meeting.

A few days after that meeting, the Benders’ family home was abandoned, and locals discovered a terrible odor coming from inside. After a proper investigation, the bodies of their 11 victims were uncovered. However, other missing persons cases could tie the bloodthirsty family to as many as 21 murders. The since-demolished house is nowadays nothing more than a gravel road two hours southeast of Wichita. Ghost hunters will travel there just to soak up any sensation of its sinister history.[5] 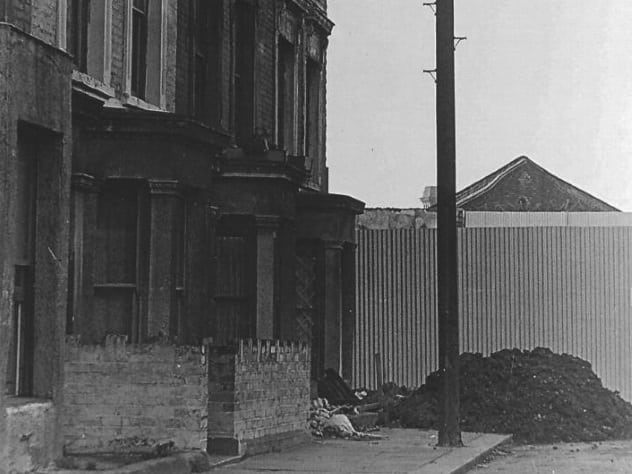 In London, 10 Rillington Place in Notting Hill is not the same house as it once was. In 1978, the place was rebuilt so that the grisly memories of the previous building could be long forgotten. In the 1940s and early 1950s, serial killer John Christie hid the bodies of his victims around the house, including burying them in the garden, hiding them under the floorboards, or stuffing the corpses inside a wall in the kitchen. In 1953, he was arrested, and it was discovered that young women who had turned to him for help with unwanted pregnancies were murdered. It is believed more than eight vulnerable victims lost their lives to the sinister Christie.

Despite the rebuild, this might be a case where past evils haven’t moved on quite so quickly. The current owner confessed, “I think the place is cursed. I’ve had bad luck since I’ve been here. I’ve been here 40 years. My health’s gone. Everything’s gone.”[6] 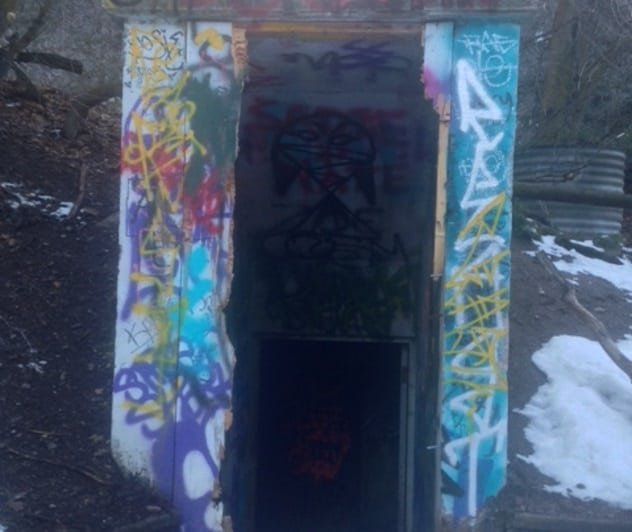 Photo credit: The Little Nugget That Could

Ted Bundy confessed to the murders of 30 young women and girls in seven states between 1974 and 1978. However, the real victim count is believed to be much higher, as he buried the corpses in several secluded areas. One location that became a killing spot for him was Emigration Canyon, Utah. The serial killer’s former rooming house has since been destroyed, leaving only a scatter of bricks. However, the sinister cellar is still intact, which encourages ghost hunters and other true crime fans who are chasing a creepy experience.[7]

Bundy moved to Utah when he was accepted at the University of Utah Law School in August 1974. It’s believed he kidnapped and murdered eight victims aged between 16 and 18 during his time in the state. The surrounding area of Bundy’s cellar would have been the last place some of these women saw before their lives were stolen from them. 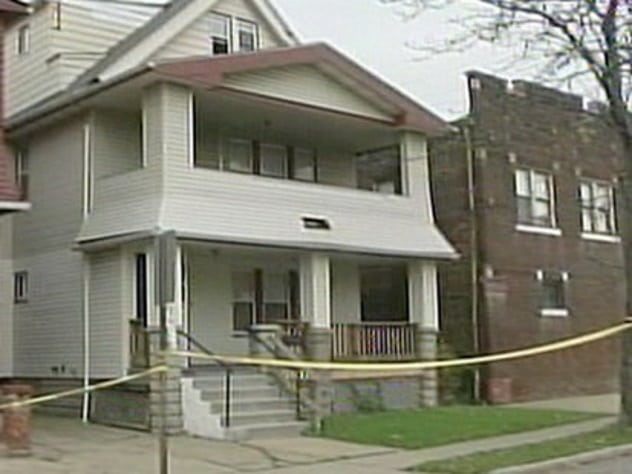 Two years after Anthony “the Cleveland Strangler” Sowell murdered 11 women between 2007 and 2009, his former home on Imperial Avenue in the Mount Pleasant neighborhood of Cleveland was demolished. The property was where the bodies of the victims were found in various states of decomposition. The hunt for more bodies left the home in crippling disrepair, and the city decided it was in the interest of public safety to tear it down for good. More than 50 people—including relatives of the victims—gathered outside the property to watch the demise of the death house.

The victims’ family members received the following hand-delivered letter from the city: “In order to prevent actions that would be disrespectful to the memory of your loved one, your family and our community; the demolition will be performed in such a way that no piece of the property will remain.”[8] 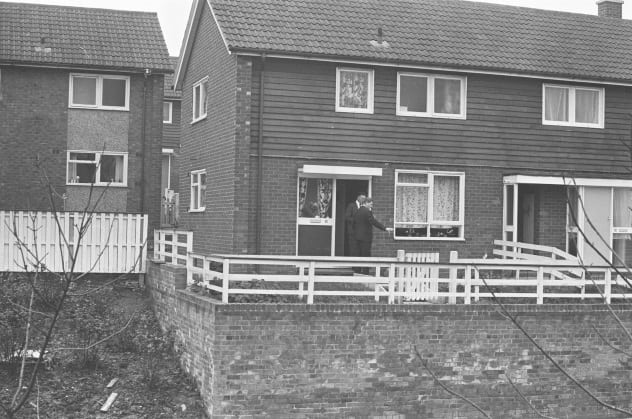 Myra Hindley and Ian Brady are considered by many as the real faces of evil. In the early to mid-1960s, they killed five children aged between ten and 17. The bodies of three of the victims were discovered in graves on Saddleworth Moor, but the chilling couple never revealed where they placed the bodies of the other victims. Hindley died behind bars in 2002 and Brady in 2017, and they never allowed the relatives of the victims any peace—withholding information about the murders until the very end.

It’s no surprise that the home the Moors murderers shared on Wardle Brook Avenue in Hattersley, Cheshire, England—the same place where investigators found the body of their final victim—stayed empty for so many years after the couple was arrested. Nobody wanted to live in a property where two of the biggest monsters in Britain once slept peacefully at night. The property was pulled down in 1987, and the site has remained empty ever since.[9] 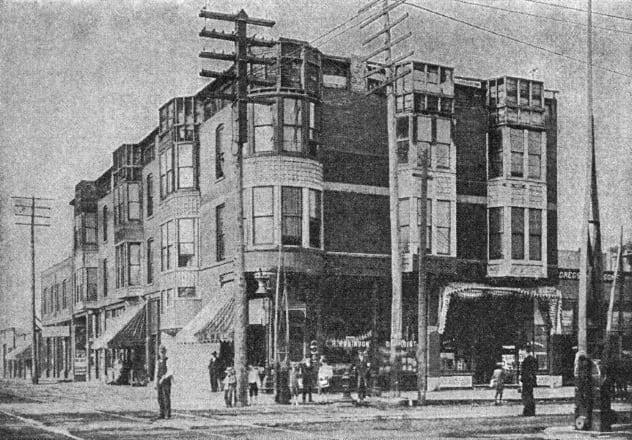 In 1885, Dr. H.H. Holmes moved to the Englewood neighborhood of Chicago and built his now-infamous murder castle. The labyrinth-like structure featured many different rooms—all with equally sinister ways to die. The rooms were soundproofed, and the many secret passages would leave his unsuspecting guests feeling disorientated. There were even trapdoors that would drop his victims into the basement where he could finish the job. Holmes murdered for financial gain; often selling the skeletons of his victims to medical research facilities.

The actual victim count has been guessed to be as high as 200, but Holmes only confessed to 27 murders. He was hanged at Moyamensing Prison in Philadelphia in 1896. In 1938, the murder castle was finally torn down, and a post office now stands in its place. Chicago tour guides still take groups to the former site of the murders, but the true horror that took place here can only really be imagined.[10]

Cheish Merryweather is a true crime fan and an oddities fanatic. She can either be found at house parties telling everyone Charles Manson was only 5’2″ or at home reading true crime magazines.
Twitter: @thecheish

Read more about the terrifying abodes of murderers on 10 Horror Houses That Really Existed and 10 Evil Houses That No Longer Exist.