Christmas cards are a Victorian invention, the first ones being sold in 1843. Sir Henry Cole, the first director of the Victoria and Albert Museum in London, had cards printed and hand-colored for his friends. In 1843, he suggested that 1,000 cards be printed and sold to the public. They were not an instant success but over time grew into the massive business we know today.

Before developing into the traditional images of Santa Claus, or a Nativity scene, or some snowy wonderland, Christmas cards went . . . in a different direction. The Victorian and Edwardian mind was clearly more adventurous than ours.

10Frog Dancing With A Beetle 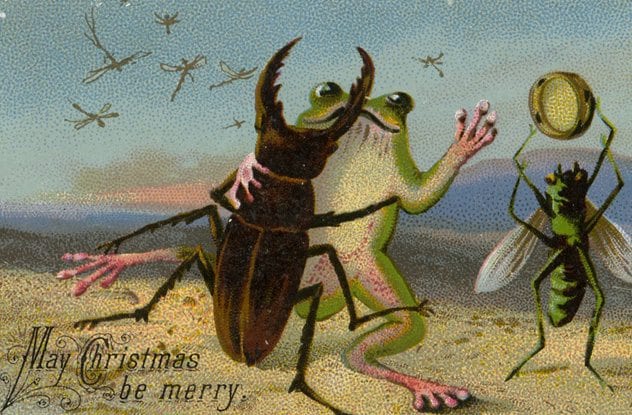 Christmas is the time of year when we are all supposed to come together. That includes members of the amphibian and insect world, apparently.

Here, we see a frog merrily jigging on a beach with a stag beetle. Quite what the significance of this image may have been is lost to time. Perhaps it should be placed alongside our current trends for cards with small dogs in funny hats. Who knows, maybe frogs are due a cutesy come-back? 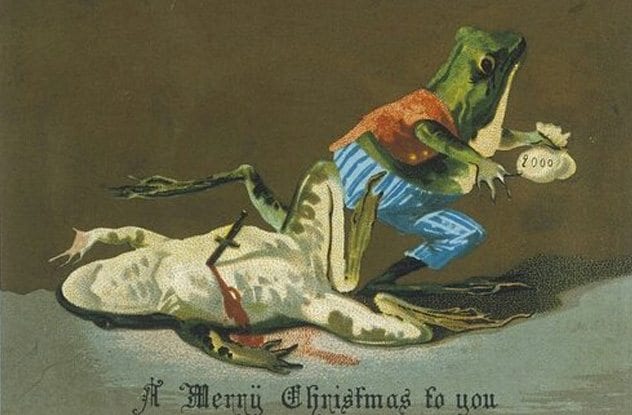 Of course not all frogs can be pleasant dancing companions. Some prove to be criminals.

In this Christmas card, we see the aftermath of a robbery. One frog lies dead on the ground, impaled by a sword, while a roguishly dressed robber scampers with a bag. Perhaps if the dead frog had not labelled it with the large sum it contained then perhaps he may not have been such an easy target. Again, the meaning of this card is not known. Nor is whether it would have been placed on a mantelpiece within sight of children. 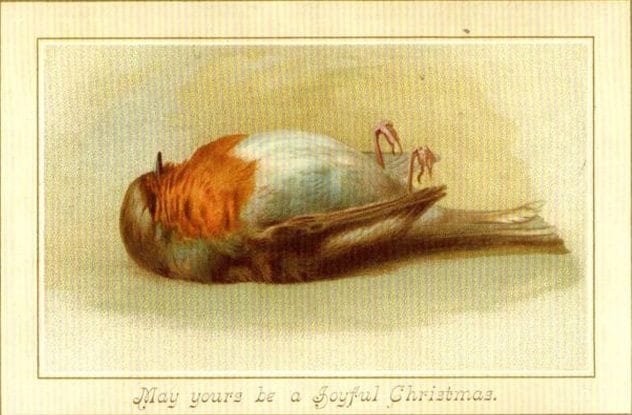 Little Robin Red-Breast is a staple of the Christmas card industry. Perched on a country gate, the flash of scarlet on his chest vivid against the white snow, is an instant view of the season. Less obvious to today’s card designers would be to have the robin lying supine and clearly in a state of rigor mortis.

This card enjoins us to have a joyful Christmas, and what could be more joyous than the contemplation of our own mortality? 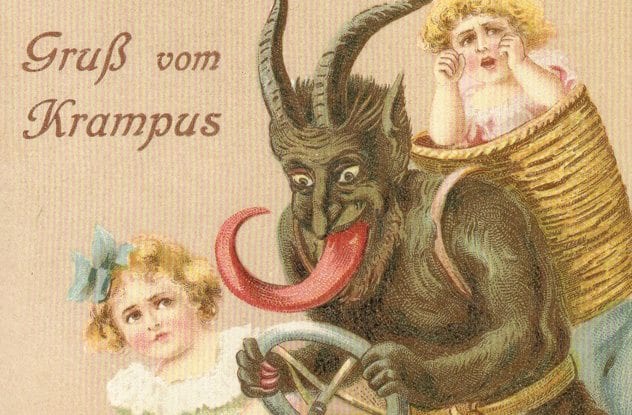 In the Anglophone world, Father Christmas keeps a detailed reckoning of who is naughty and who is nice, ignoring the philosophical problems of those who are morally ambiguous. Still, his simple system leaves him with a list of who to reward with gifts comes the big day. What about those who are naughty? In Germany, a figure called Krampus fills that role.

A hairy demon, he comes to actively punish the naughty. Hence this card, with his image and the faintly sinister “Greetings from the Krampus.” There was a whole genre of these cards, and they were meant to be humorous, if terrifying, to children. 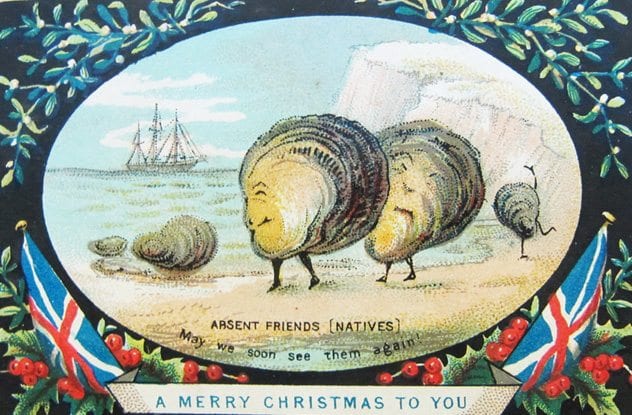 It is not obvious what the image or the message mean to anyone. Even the National Library of Ireland has no idea quite what it means. Perhaps it relates to Lewis Carroll’s poem “The Carpenter and the Walrus,” which features oysters being led to their deaths. Cheery. 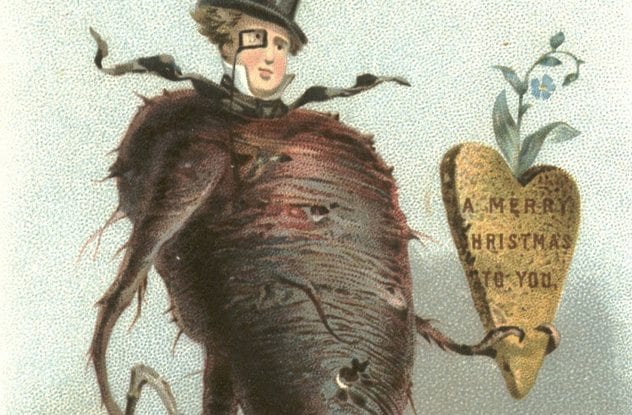 A hearty winter meal often involves root vegetables. That warm and filling feeling is something everyone loves about Christmas dinner. It is possible that that is the aim of this Christmas card.

Here comes a root vegetable bearing a Christmas message. As if that was not festive enough, the root vegetable is wearing a monocle and strutting with a cane. If you are going to send a vegetable card, you might as well send a fancy one. 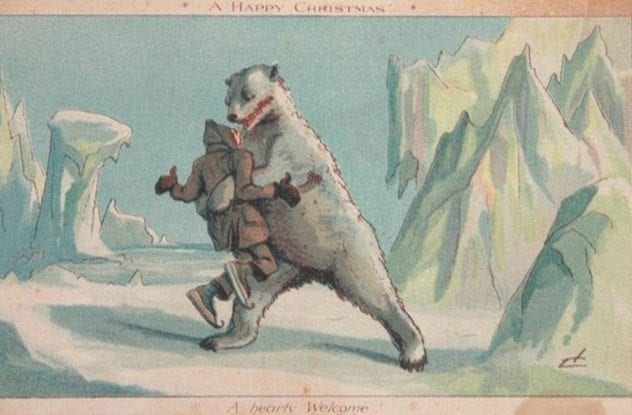 It turns out a hearty feeling is just what the makers of this card were aiming at. While a vegetable soup might make you feel as if you have received a great big hug, it is no replacement for the real thing. This card gives you the best bear hug possible—by using a real bear.

The brutal polar bear is giving someone in pointy boots “A Hearty Welcome” that seems to be crushing the life out of him. The message of this card, like so many others on this list, is lost. It could be that the makers, in showing the man being smothered reacting with a shrug, wished to teach those who saw it a how to cultivate a certain sang froid.

3The Proof Of The Pudding 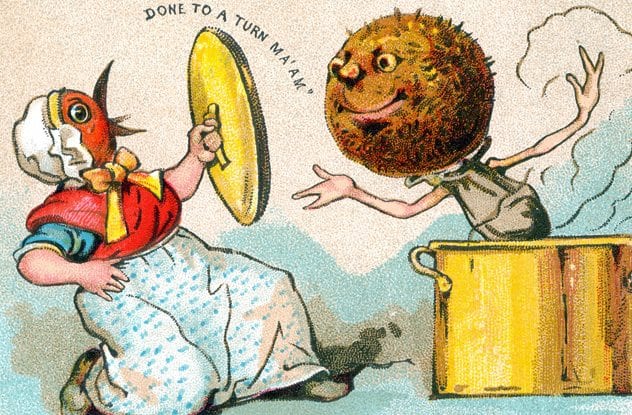 As the saying goes, “The proof of the pudding is in the eating.” As this card reminds us, we should never trust the word of an anthropomorphic pudding when it leaps from the pan and shouts at us. Especially if we have the head of robin. No wonder the bird-woman looks shocked.

Of course, today, most people microwave their Christmas pudding, whereas a Victorian housewife would have to boil hers for hours and hope that it was cooked all the way through. Perhaps inhaling the vapors from the pudding would make this image one that might occur in the mind of a bored housewife. 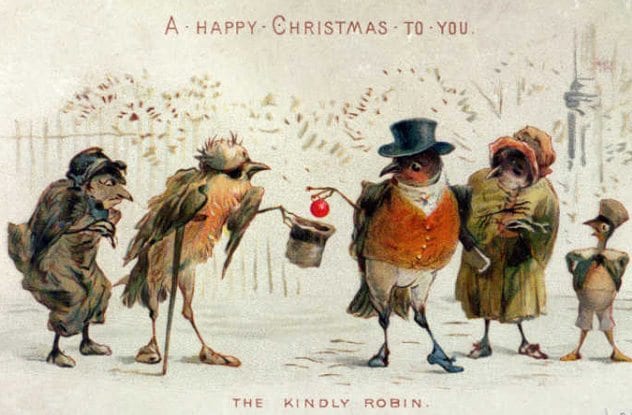 We have seen the Christmas robin already on this list, if only post-mortem. Here, we see him in a livlier, though equally depressing pose. His red breast is formed by a waistcoat, and he is described as a kindly bird.

The only way for someone to be kindly is if they have the less fortunate to be kindly towards. Here, that role is filled by two tattered birds, one on crutches and the other looking miserably on. This card plays on the Victorian ideal of the charitable gentleman, but is still not one we would want on our wall. 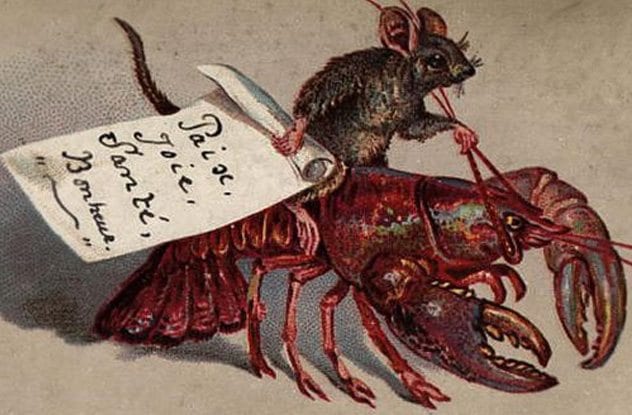 We all splash out on food at Christmas. A heaving table is the sign of Christmas well spent. If you have the money for it, you might even stretch to lobster for your starter. How will you go about getting your lobster? You might order it in, but where is the fun in that? Far better to have it delivered by a rodent jockey. And everyone knows that French food is the best in the world. That must be why this rat is delivering his Christmas message in French.

“Peace, Joy, Health, Happiness!” to everyone.

Ben Gazur is freelance writer and can be followed on Twitter.