The Sun is one of the most ancient symbols of divinity. For millennia, people have seen this star as the center of their spiritual universe. It gives life, reminds us of our mortality, and offers a glimpse into the possibility of rebirth. The archaeological record is filled with enigmatic objects offering tantalizing clues about these ancient sun cults. 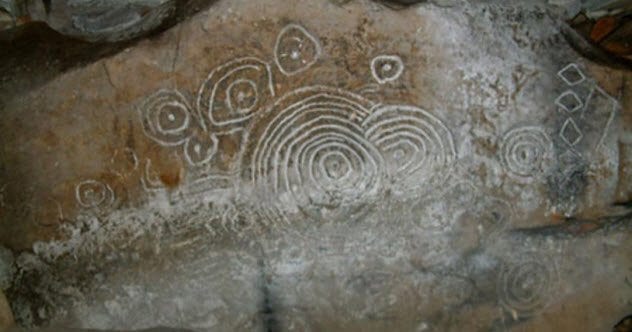 On November 30, 3340 BC, Irish Sun worshipers carved the first known representation of a solar eclipse. The engravings into three megalithic stones are located on the Cairn L site in County Meath. Researchers discovered that the Sun illuminates a special chamber within the monuments on November 1 and February 2, which mark the halfway points between the solstices and equinoxes.

The stone carvers predate the Celts. However, all later arrivals to the Emerald Isle continued Sun worship in some form. Brigit was the Celtic deity of light. Known as “The Bright One,” the Sun goddess was later absorbed into the Christian pantheon of saints.

Experts were able to trace the origin back to a specific date. Out of the 92 eclipses they analyzed, only the one in 3340 BC matched the location of the stones. Chinese astronomers made the previously oldest known eclipse carving in 2800 BC. 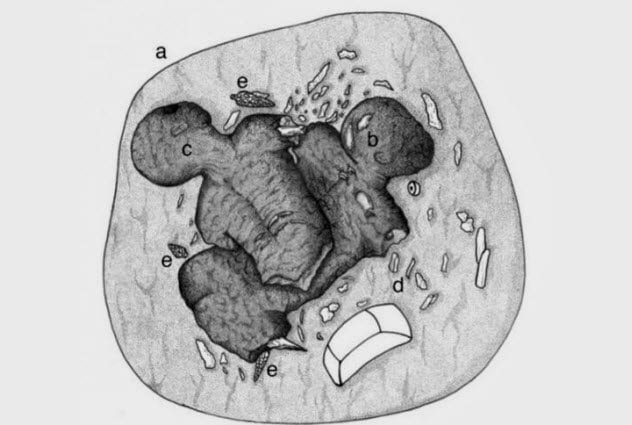 At the Mayan site of Tikal, archaeologists unearthed evidence of human sacrifice related to Sun worship. Researchers believe that a man and boy were killed and burned to reenact the myth of twins who immolated themselves to be reborn as the Sun and Moon. This legend is widespread throughout Mesoamerica. However, there has never been concrete proof of human sacrifice associated with the myth.

Tikal’s Burial PP7TT-01 contains the body of a boy between 10 and 14 and a man between 35 and 40. Discovered at the bottom of a pit, they had been sacrificed and burned. Obsidian blades and rib lesions suggest that the victims were killed before they were set ablaze.

Others believe that they were still alive when cast into the pyre. The burial pit was built close to Tikal’s solar cycle calendar structures. The grave was also built on the compound’s eastern edge, associated with the rising Sun.

8 Grave Of The Sun Priestess 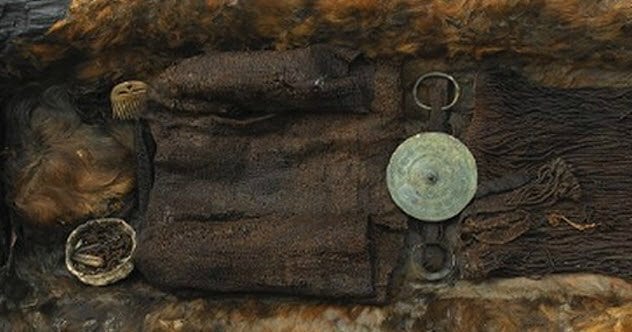 In 1921, archaeologists uncovered the burial of a “Sun priestess” in Denmark. Dated back 3,400 years, Egtved Girl was buried in an oaken coffin along with her infant. Between 16 and 18, the 160-centimeter (5’3″) girl was found wearing a Sun-shaped bronze belt buckle.

Experts interpret her belt as evidence that she was a priestess in an ancient Nordic Sun cult. The partially cremated bones of her child were found alongside her in a bark box.

Isotope analysis of Egtved Girl’s teeth revealed that she was likely born and raised in the Black Forest 800 kilometers (500 mi) to the south. Her clothes were typical for Denmark in the era. However, they were made from animals that lived elsewhere.

It is likely that she tried to integrate herself into foreign society by imitating their clothing. Experts believe that Egtved Girl married into a Danish chiefdom and was buried in her adopted home. 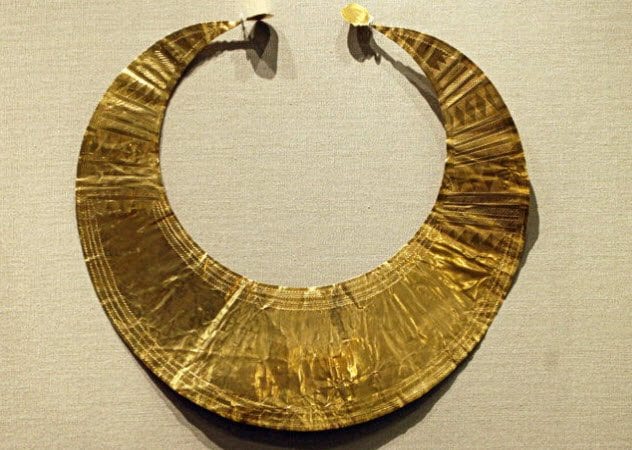 Archaeologists recently discovered that Bronze Age Irish Sun worshipers sought out “magic” gold from across the sea for their sacred artifacts. Chemical analysis revealed that the 4,000-year-old gold, which was assumed to have been mined locally, came from southwestern Britain.

The most common forms for this alien gold were Sun shapes, which reflected the spiritual beliefs of the island. No similar artifacts have been found in Britain, which suggests that the gold was exported and then worked on in Ireland.

Southwestern Britain was the site of a Bronze Age gold rush. Experts theorize that 200 kilograms (440 lb) of gold were extracted from Cornwall and West Devon. Some believe that the gold was a by-product of the more important tin industry.

Cornish tin was essential to Western Europe during the Bronze Age as tin was an integral part of the alloy along with copper. It is unknown whether British gold was more common or sought after specifically for aesthetic and symbolic qualities. 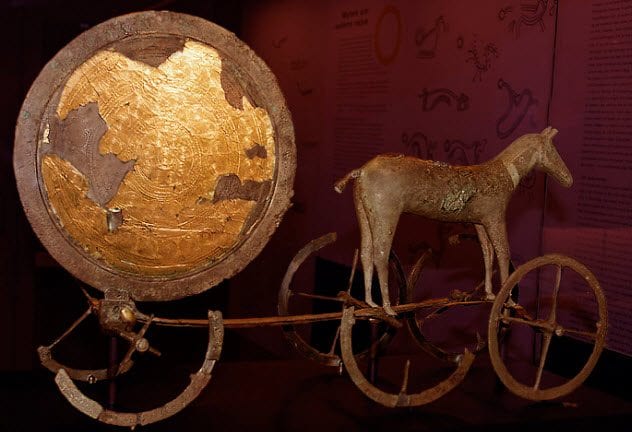 In 1902, archaeologists discovered the Trunholm Sun chariot in a Danish bog. Dated between 1800 and 1600 BC, the 58-centimeter-long (23 in) artifact consists of a horse, six wheels, and a disc—all made of bronze. The disc is covered with a thin gold sheet on one side.

The hollow-cast sculpture is one of the earliest representations of horses in Europe. Some speculate that the wheels were in place to move the horse and solar disc during ritual performances. Others believe that the wheels simply may have helped the chariot stand upright.

According to Klaus Randsborg of the University of Copenhagen, the dimensions of the “Sun side” represent one-third of a solar year and the “Moon side” represents six lunar months. The idea of “traveling Suns” pervades the mythology of the ancient world. Norse, Celtic, Hindu, Greek, and Egyptian religions all perceived that the Sun was carried across the sky by a solar deity or animal. 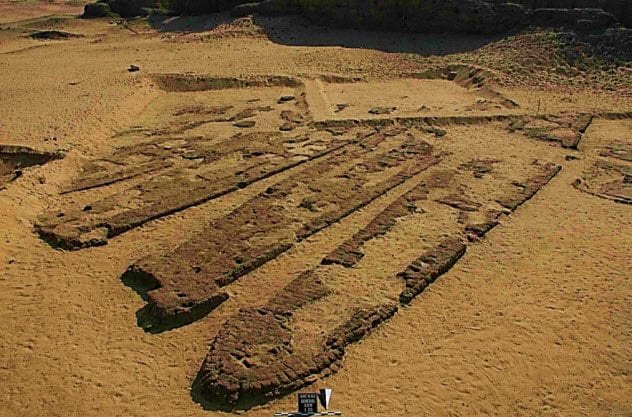 In 2000, researchers uncovered the hull of a 5,000-year-old vessel while excavating at the ancient Egyptian site of Abydos. Dated to 3000 BC, the ship is one of 14 discovered at the site.

These Abydos boat graves are located next to the funerary enclosure of Khasekhemwy, a second dynasty pharaoh. Experts believe that the boats were buried prior to the pharaoh’s tomb and may have been intended for a ruler as early as the first dynasty.

The Abydos boats are related to the ancient Egyptian belief that Ra, the Sun god, traveled through the sky in a solar boat. The journey represents the cycle of Ra’s daily regeneration.

No one knows whether the boats were used prior to their burial. They were large enough to accommodate about 30 rowers each and could have been sailed. Their construction of planks fitted together makes them the earliest Egyptian example of “built boats.” 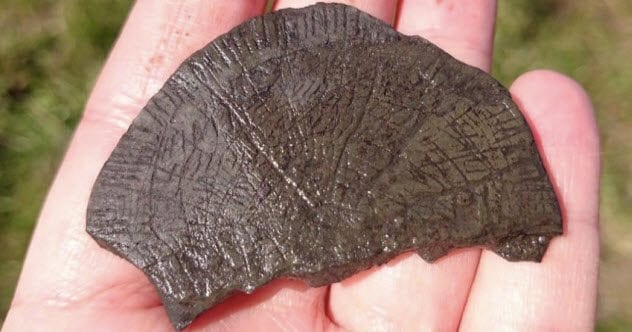 Archaeologists believe that the Danish Island of Bornholm was once the site of a Sun-worshiping temple complex over 5,500 years ago. The entrance to the complex was aligned with the summer solstice, and researchers have uncovered a multitude of stone discs inscribed with sunrays.

Some speculate that the solar discs might actually be early maps—with fields, fences, and plants. These “stylized maps” bear a resemblance to landscape carvings found in the Italian Alps from the same period. Others suggest that the Sun stones were magic items, intended to bring fertility to farmland.

Excavations have already uncovered pottery, animal bones, and Sun discs, which are often damaged. Similar discs have been found at Rispebjerg, which also served as a sacred site for Sun worshipers. Ritual activity continued at the Vasagard site for several hundred years. Researchers are using 3-D laser scanning technology to map the complex’s box and passage tombs. 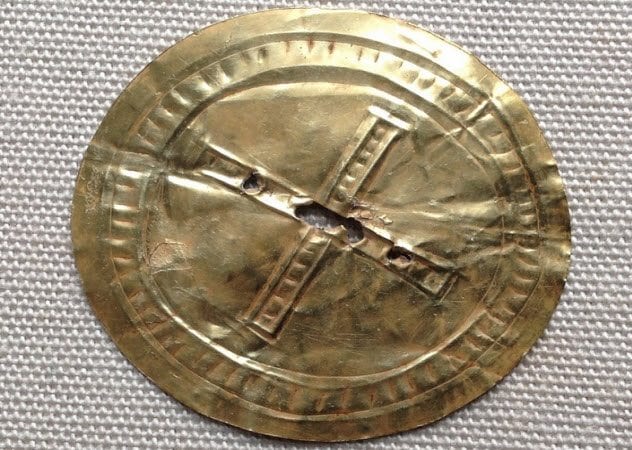 In 1947, archaeologists discovered a mysterious golden Sun disc alongside the remains of a skeleton near Stonehenge. Dated back 4,500 years, the thin sheet of embossed gold features a cross within a circle.

Experts believe that this 5-centimeter-wide (2 in) disc represents the Sun, which is in keeping with Bronze Age British spiritual belief. So far only six Sun discs have been found on the island.

Given the Sun disc’s rarity, experts theorize that it belonged to a chieftain. This Bronze Age elite cherished the artifact so much that he took it with him to the grave. Pottery and flint arrowheads were also found in the burial mound at Monkton Farleigh.

The disc dates back to the time that the central ring of Stonehenge was erected. A glistening golden disc would have meant far more to these ancient Sun worshipers than mere decoration. Two small holes suggest that the Sun disc was worn as a talisman and status symbol. 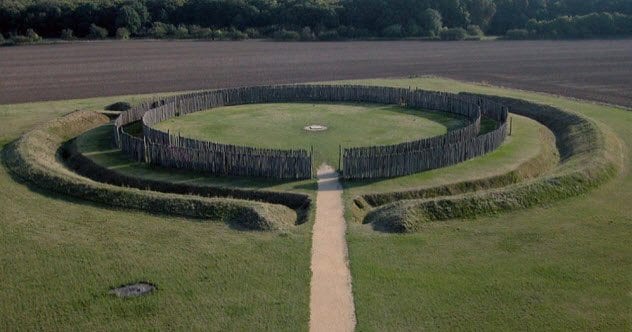 In 2002, archaeology students discovered the world’s oldest solar observatory during digging practice near the university in Goseck, Germany. Their excavation exercise revealed a 7,000-year-old henge with two gates that were aligned with the solstices.

The Goseck Circle is 70 meters (220 ft) in diameter. A circular wooden wall surrounds a narrow ditch. Archaeologists have been aware of the enclosures. However, they have never before understood their function. Labeled “German Stonehenge,” the area has become a tourist trap.

The people that built the Goseck Circle belonged to Stroke-Ornamented Pottery Culture, which dominated central Europe for 200 years around 4600 BC. Similar wooden henges have been found throughout Germany, Austria, and the Czech Republic.

The spiritual beliefs of these long-gone people remain a mystery. However, the recent discovery suggests the worship of celestial objects, constellations, and most notably, the Sun. This monumental architecture dates thousands of years before the Egyptians built the pyramids. 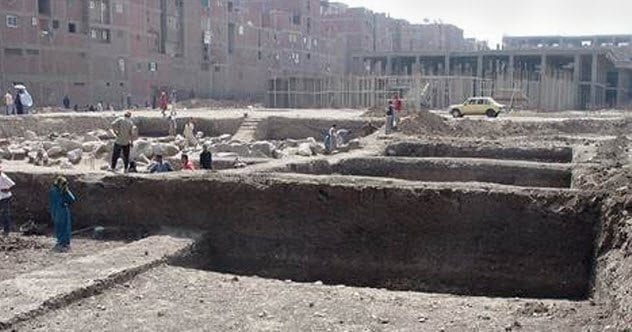 In 2006, archaeologists discovered an ancient Sun temple under an outdoor marketplace in Cairo. The temple was once part of the city of Heliopolis—the epicenter of ancient Egyptian solar worship. Inscriptions reveal the temple’s founder: Ramses II.

A seated statue depicts the 19th dynasty ruler in the leopard skin of a high priest of Ra—the chief Egyptian solar deity. Stylistically, the statue resembles those of the 12th dynasty. Some theorize that artisans might have modified an older statue to resemble Ramses II.

Experts believe that the Egyptian solar cult originated in the Old Kingdom between 2700 and 2200 BC. Ramses II was renowned for his military campaigns against the Hittites and Syrians and his monumental building projects.

Through his reign (1279 to 1213 BC), he raised temples and statues in honor of himself. The temple to Ra at Heliopolis is the largest of the Ramses II temples yet discovered.