Cults have a very specific image in the American public eye. We tend to think of members in robes, talking about the end of days, and their leaders looking and acting violent and crazy. The truth, however, is much more sinister.

Cults tend to have members who blend in almost perfectly with society, who seem normal, even charming. The leaders tend to be extremely enticing, which is how they get thier members in the first place. Yet, for the most part, they operate under the radar, unseen and unheard of by most normal people.

Some cults have managed, however, to spread into the mainstream, and recruited (or even produced) actual celebrities! Actual, big-name, A list celebrities that the public know and love have been involved in, and some are still involved in, the following cults. 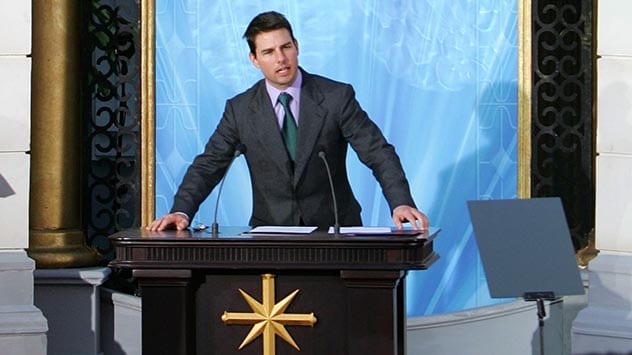 Scientology, even as the most well known cult on the list, is a lot to take in. They have complex rules, dozens of ‘levels’ to their memberships, their own navy, thousand year contracts for service to the cult, and require massive amounts of money from their members.

They’re known for belief in aliens, targeting ex members, targeting critics, whom are referred to as ‘suppressive persons’, and even infiltrating the US government to shred documents on their behaviors (an endeavor known as Operation Snow White). Their founder’s wife has been missing for years and is presumed dead, though members are required to claim they have seen her and that she is “happy and healthy”.

The cult even designated Matt Stone and Trey Parker, creators of the hit adult cartoon South Park, as suppressive persons at one point, instructing agents of the church to harass the pair at their houses and pick through their trash to find anything with which to blackmail them. The cult is also known to be violently homophobic, often placing gay members in re-education camps that function as a cult owned and operated prison.

With such a horrid reputation, you’d think they’d have been unable to attract anyone for whom image is everything, such as a celebrity, and yet among their ranks are Tom Cruise, John Travolta, Danny Masterson, and Juliette Lewis.[1] 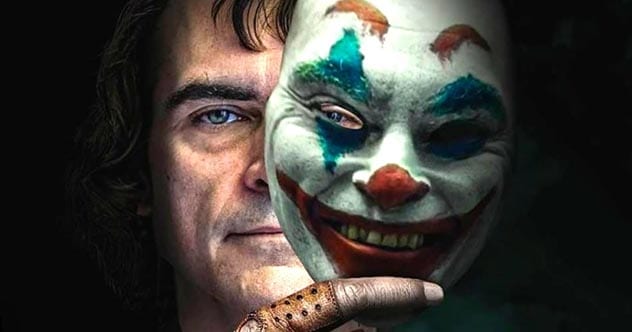 Abbreviated as TFI, the cult is Christianity based and has some…strange views on the Christian Messiah. TFI believes that humans are meant to serve Jesus as a wife serves a husband, and yes, that extends to sexually and includes the men of the cult, although they are required to imagine themselves as women.

The cult is also, unsurprisingly, known for rampant child abuse, and former members have released books and statements, as well as collectively running a website dedicated to finding, connecting with, and sharing experiences as ex members to shed light on the horrors of being a child within this cult.

Unsurprisingly, TFI has not managed to recruit many celebrities, but it did manage to produce several! Among the ex members born into the cult are the Phoenix siblings (Rain, River, Joaquin, and Summer) and Rose McGowan. The one notable celebrity recruit is Jeremy Spencer, of Fleetwood Mac. Break the Chain, indeed![2] 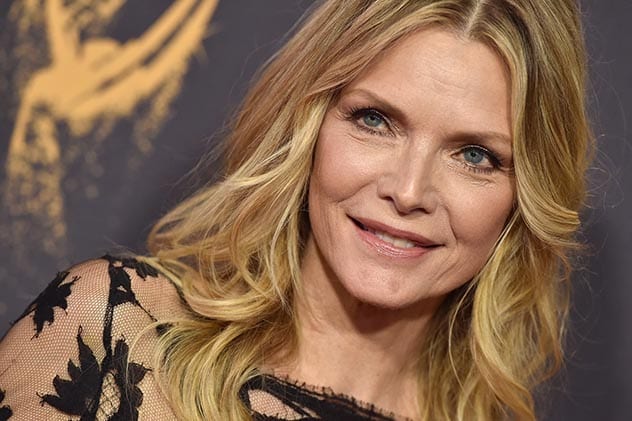 Likely the only thing that every single scientist in the world is in agreement on is the fact that human beings, and indeed all living beings, need food and water to live. It’s the fuel that keeps us going, without it our organs basically eat themselves and we die a horrible death. Everyone knows it, and we’re all in agreement.

Except, of course, the Breatharians, who believe humans can, should, and must survive entirely on air and sunlight. Except the leaders, of course, who are allowed fruit and vegetable juice. They need their strength, after all!

The rest of the cult, however, is instructed to go as long as possible with only air and sunlight, often going upwards of 3 days without water, and a week without any nourishment, eventually to be allowed a small amount of juice. This has resulted in several deaths, including the highly publicized death of Verity Linn, who died alone in scotland, starved to death by her own hand.

Hippie diet and cleansing rituals are big fare in Hollywood, however, so it’s no surprise that this cult has attracted celebrities, the most notable of which is Michelle Pfeiffer. Pfeiffer fell in with the cult in her 20’s, lured in by her personal trainers with whom she lived at the time as she was trying to establish herself in Hollywood. It wasn’t until her first husband made a movie about cults that she realized she’d been tricked into one, and promptly left.[3] 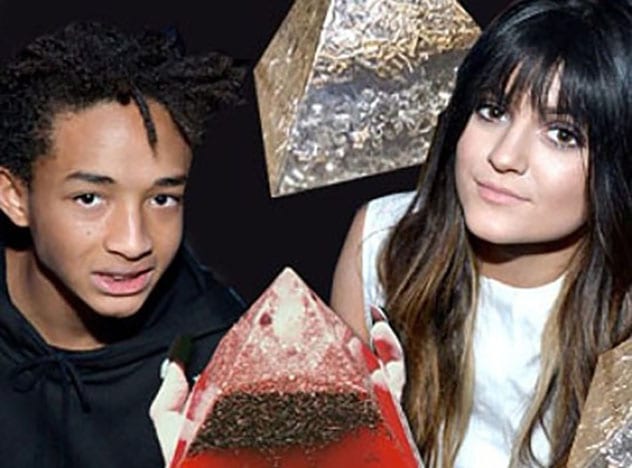 This cult is a little different from the others, in that it’s not just celebrity membered, its celebrity created and run. The Orgonite Society was/is a cult created by Will Smith’s son, Jaden, his then girlfriend Kylie Jenner, and sister Willow. The cult focuses on using pyramids made of “orgonite”, a man-made crystal, to “re-align and heal the energies of Gaia”.

If you didn’t know already, Gaia is the name for the so-called soul of the Earth as a whole. Members of the Orgonite Society believe that Mother Nature’s chakras are all out of whack, and can be realigned by strategically placing these little stone, glitter and resin pyramids (although they’re less pyramids and more muffin shaped ) in certain places around the world.

Personally, I can’t see how half fake rocks mixed in a silicone muffin mold will fix the world, but I can’t follow most of the Smith Kid’s logic in anything.[4] 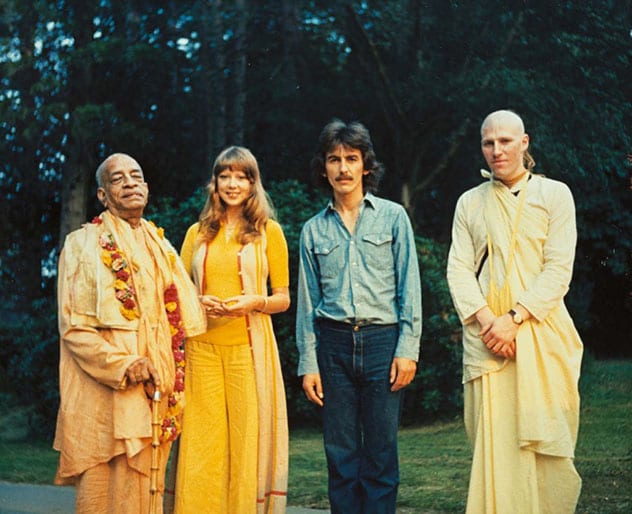 As far as cults go, Hare Krishna is pretty mild. The worst they’ve been accused of seems to be giving their members acid, and to be fair, what spiritualist movement derived from Hinduism didn’t offer its members a ton of drugs in the mid to late ’60s?

The cult operates on a Hindu foundation but with one large difference, that being believing that the Christian God, Yaweh, and Allah are all the same god as theirs, called Krishna. The cult also has a weird relationship with food, believing that any emotions you feel during the cooking is passed into the food and then into the eater, so the monks of the cult don’t eat at restaurants. They’re also vegan, believing the eating of animal flesh to be an affront to God and will fill you with violent thoughts and actions.

The cult’s claim-to-fame big name celebrity is, to the surprise of absolutely no one, George Harrison, of the Beatles. The ’60s really were a wild time in celebrity news.[5] 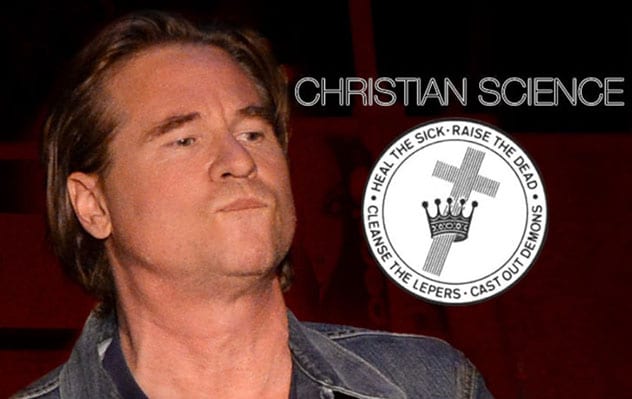 This is another one of those “passing knowledge” cults that we’ve all heard of at least once, but don’t really understand in depth. The basic rundown is very simple: the cult believes that any and all physical illnesses are actually illnesses of the spirit, and can be prayed away.

This extends to ALL physical illnesses, from a simple cold to stage 4 cancer. Adherents to the cult refuse all medical treatment for themselves and their children, instead spending hours in prayer over the sick person (who must also pray). Chronic maladies, such as epilepsy or mental illness, are seen as a flaw of spiritual weakness, and are prayed over even harder. The founder, one Mary Baker Eddy, it should be noted, died of pneumonia after refusing to seek medical treatment.

Their celebrity member happens to be Val Kilmer, who almost died of a tumor in 2015 before being convinced by pleading family members to seek genuine medical attention. He survived, but is reportedly still a Christian Scientist.[6]

Have you ever wanted to just chill out with a vegan at their restaurant and listen to him tell you how to have good vibes and maybe brag a little about how he technically killed a guy? Well, you’re too late by a few decades, but had you been around in the ’60s (wow, that was a great decade for cults) you could have met Father Yod, a hippie vegan who ran one of the world’s first health food restaurants out in Los Angeles.

The Source Family was the name for his followers, roughly 150 of them who all lived crammed like sardines into a 3 bedroom house in the Hollywood Hills, each member taking the surname ‘Aquarian’ to bolster the impression that they were an extensive family group. They made music together, which was recorded and sold out of the restaurant. The members reportedly saw, and still see, Father Yod as a literal God, and would have done anything to serve him.

The cult finally dissolved in 1977 when, after moving to Hawaii for more space, Father Yod died in a hang gliding accident that left him nearly smashed to bits on a beach.

Have you guessed their celebrity members? It should come as no shock to find that it was, of course, John Lennon, the most hippie Beatle, and his wife Yoko Ono. It was the late ’60s (and ’70s) after all.[7] 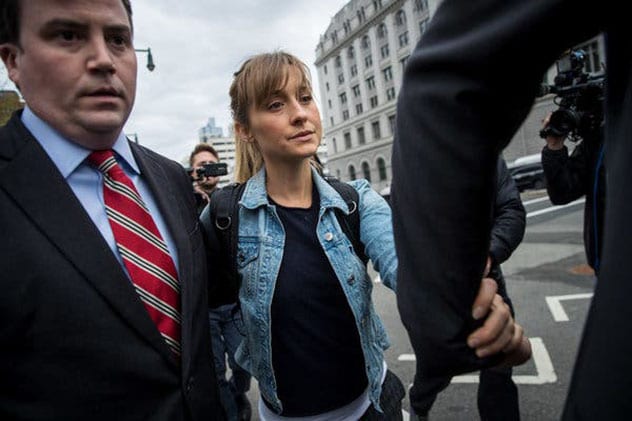 Now, this one is big news, and we all remember the headlines. The celebrity members won’t be much of a shock, but this cult still deserves a place on this list for the sheer insanity of its existence in general.

NXIVM, if you weren’t aware, was a Hollywood only cult comprised of mostly minor celebrities and actress hopefuls in a cascading pyramid scheme of recruitment levels. The cult, headed by Keith Raniere and Allison Mack of ‘Smallville’ fame, was a massive, multi-level-marketing company turned sex cult.

The women of the cult would be branded with Raniere’s initials (literally branded, as in burned) and would serve under a ‘master’ and be encouraged to recruit their own ‘slaves’ who would become ‘masters’ to more ‘slaves’ in classic MLM format.

One woman was confined to her bedroom for two years after falling in love with a man who was not Raniere, and another recounted being forced to sleep with Raniere and allow him to take naked pictures of her.

The cult operated in relative secrecy for years before finally being fully exposed down to the bones in 2018, whereupon many famous women, including Allison Mack, Nicki Clyne and India Oxenberg were outed as members.[8]

For more lists like this, check out 10 Shocking Facts Of The World’s Most Dangerous Cult, and 10 Psychological Reasons Why People Join Cults.