When rock art is a little strange, things get interesting. Ranging from the controversial to the paranormal, some aren’t what they appear to be, while others remain downright inexplicable. More and more, ancient paintings and carvings are revealing the behaviors and obsessions of long-gone cultures and, incredibly, even genetic mysteries from prehistoric times. 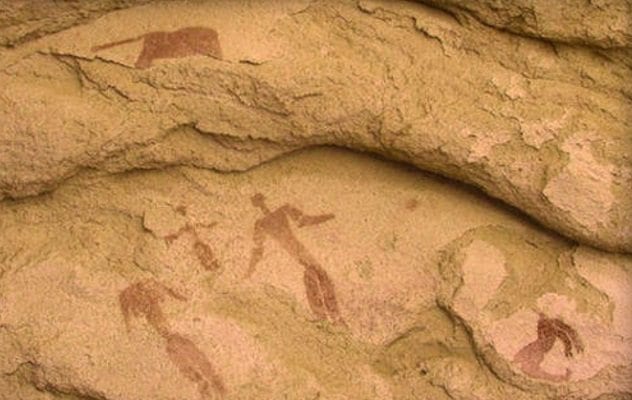 In 2005, geologists made a discovery that belongs to the Neolithic or Paleolithic era but is still very recognizable today. While in a small cave in the Sahara Desert in Egypt, somebody looked up, and on the ceiling sat an apparent nativity scene. It certainly doesn’t show the baby Jesus. The painting is 3,000 years older than the famous Christmas spread, but the elements are there.

A newborn infant is raised, as if important and valued, between its parents. Two animals and a star in the east complete the picture. The animals aren’t domestic barnyard types, either. One is a baboon-like creature, and the other a lion missing its head. Researchers are intrigued by the meaning of the dark red ocher creation. No nativity scenes were known to have existed before the early Christian age. 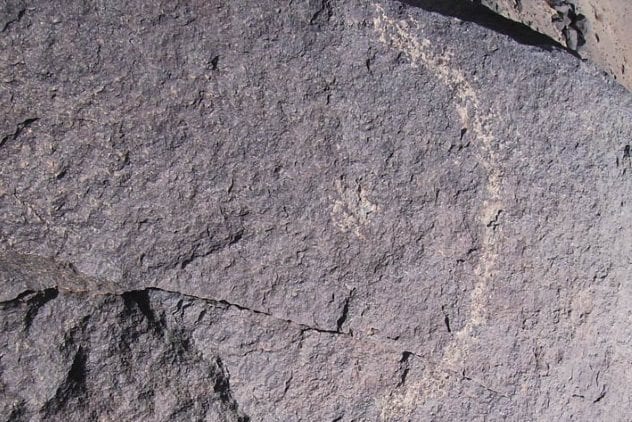 In Sudan, 15 sites with ancient rock art confused archaeologists upon their discovery in 2011. The desert valley of Wadi Abu Dom is etched with carvings, from single images to almost 30 at different places. The collection grew over time and was added to by different artists. Those chiseled around 1,500 years ago fit with when Christianity arrived in Sudan: crosses, a church, and what might even be St. George on his horse. The 3,000-year-old pieces contain well-drawn cattle.

The batch aged 5,000 years mystifies code-crackers. The art is simply unexplainable. There are spirals coiled so precisely that some theorize them to be an early mathematical notion. Another type is geometric but lacks any recognizable form and is patterned like a fishing net. Archaeologists also found “rock gongs.” When hit with a smaller stone, they emit clear sounds that can travel quite a distance. Of unknown age, they may have been signaling devices. 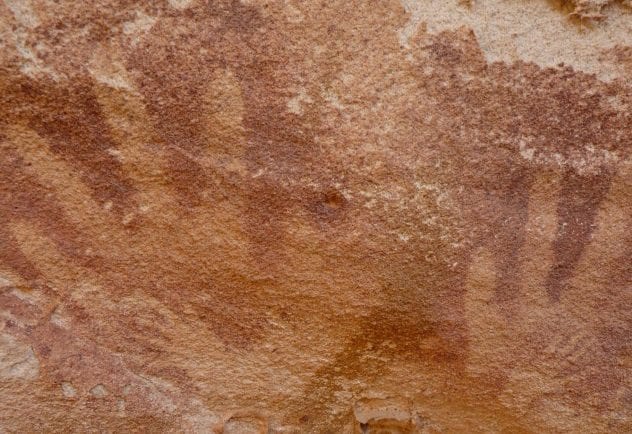 In the Sahara, the Cave of the Beasts was named for the weird, headless beings painted on its walls. Discovered in 2002, the decapitated creatures weren’t what drew attention, but 13 baby handprints were. Some sat inside the handprints of adults. This nurturing scene melted hearts until one anthropologist noticed that the infant hands weren’t proportionally correct. The 8,000-year-old imprints were even tinier than premature newborns. The fingers were also abnormally long. They couldn’t have been human.

Analysis proved that they came from an animal, probably the front paw of a desert monitor lizard. Added at the same time as the hands, the same pigment was used for both. The reason behind this relationship remains a mystery, but it appears to have been a close one. Apart from being found inside people’s prints, the paws were also found arranged in friezes, a design usually made by human hands.

7 The Venus Of Hohle Fels 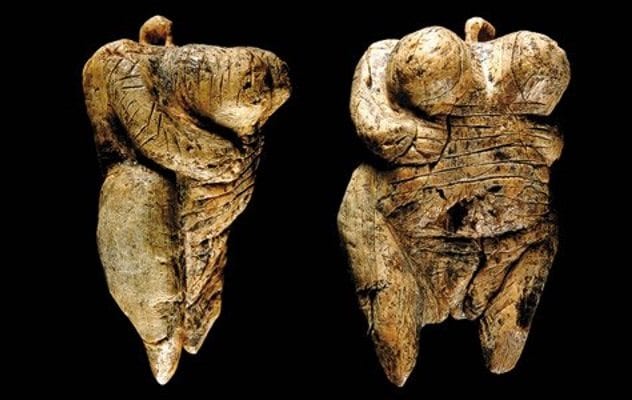 The hand-sized lady renewed a debate about the meaning of animal statuettes previously exhumed from Hohle Fels and neighboring caves. Some argue these were talismans to attract certain game, but they don’t match the bones found on-site. Long-ago locals ate hoofed animals, but most statues were of predators. One half-man, half-lion could be a copy of a shaman’s vision. The Venus might represent prehistoric beauty and health, but perhaps the carver just wanted a naked doll. Most scholars agree it’s nearly impossible to prove what the statuettes were for. 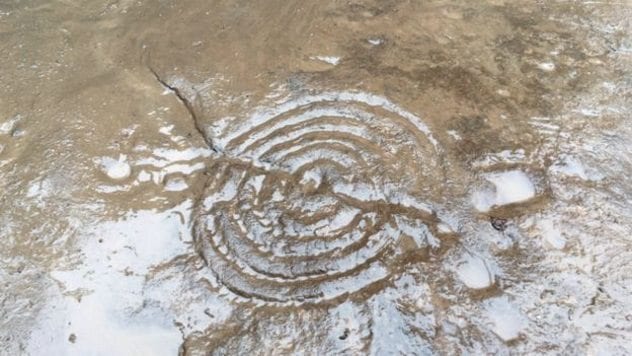 The Cochno Stone is a mysterious rock found in Scotland. Somebody did some serious decorating on this slab, including geometric swirls known as cup and ring marks. While not unique, the stone ranks among the best examples of such spirals in Europe. The Glasgow artifact was dug up in 1887, but above the ground wasn’t the best place for it. Something that measures 13 meters (43 ft) by 8 meters (26 ft) and carries funny markings is bound to attract attention.

By 1965, vandals and weather had done their damage. An archaeologist attempting to prove the swirls were an eclipse forecast left enough paint lines on the surface to make any sensible conservationist weep. For protection, the stone was reburied.

In 2016, the 5,000-year-old slab was unearthed, scanned, and photographed for better study before being returned to the Earth once more. The message on the Cochno Stone, if there is a message, remains a mystery. 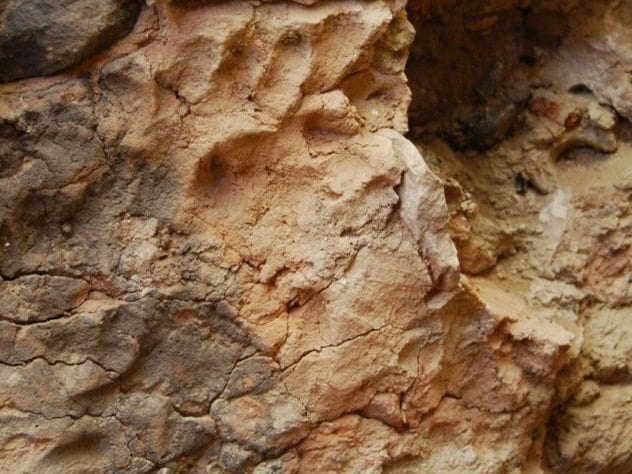 When it comes to extremities, hands don’t get all the glory. A thousand years ago, feet were revered by a Pueblo culture that lived in Chaco Canyon in New Mexico. Want to honor your walls? Forget about buying a Picasso. The Chacos plastered feet and sandals all over. This community had a special physical trait: polydactyly, which is when hands or feet have an extra digit. Not everybody had an additional toe, but the Chacos had the highest percentage of any ethnic group, based on a study of over 90 Chaco skeletons.

Chaco art revealed the true depth of their respect for polydactyly. Sandals were everywhere, from real ones to shoe-shaped stones to prints against walls and floors. On some, researchers noticed adjustments to make an extra tootsie comfortable. Bare feet and hands also appeared, but those with more digits were positioned more often near the entrances of important rooms. 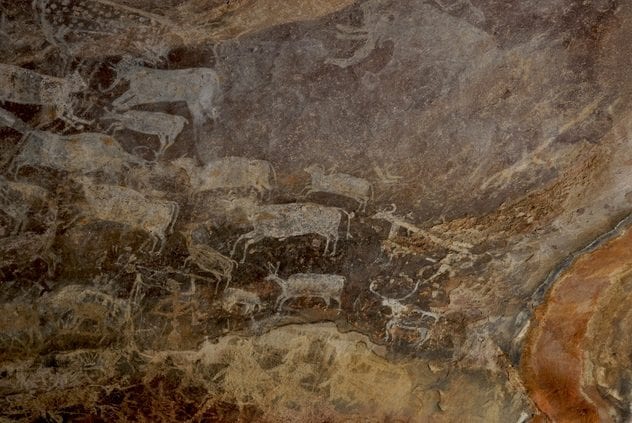 A 2014 study determined a remarkable link between prehistoric doodles and sound. Such art is more likely to be found at locations with a tendency to echo loudly. Additionally, many depict scenes connected with thunderous sounds. In Europe, India, and Indonesia, hoofed herds in full charge adorn caves where resonance can get rowdy. Where echoes carry in North America, sometimes there are Thunderbirds. The creature’s beating wings are said to be where thunder comes from.

Even when researchers investigated places known for booming echoes but with no known drawings, they were rewarded with several discoveries of brand new rock art. It’s feasible that prehistoric humans, not fully understanding the nature of echoes, saw them as manifestations of something sacred. An old myth from the Canadian Shield interestingly connects a rock spirit, the Memegwashio, to both cave art and echoes. 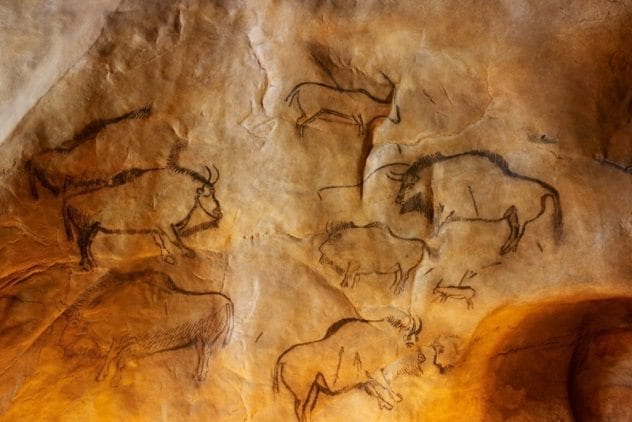 The Higgs bison represents one of the few times when science received backup from cave paintings. After testing ancient bison DNA, the results were odd. Unexpectedly, the DNA wasn’t a close match with modern European bison. Instead, a mysterious ancestor was hinted at, one researchers dubbed the “Higgs bison.” Like the infamous Higgs boson, they suspected but couldn’t prove its existence.

The tests delivered another zinger: the Higgs bison was a hybrid. Two bovine groups roamed ancient Europe: aurochs and the Steppe bison. Around 120,000 years ago, something rare happened. The two distinct mammals species produced fertile offspring that led to an entirely new species. 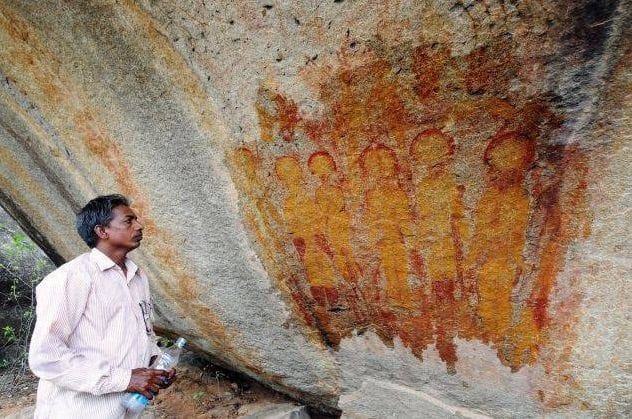 Indian archaeologists were throwing around the words “UFOs” and “aliens” after looking inside a cave in 2014. In the rural village of Charama in Chhattisgarh, residents are very familiar with the 10,000-year-old paintings. Their ancestors told of a legend wherein the so-called Rohela people would come to the village. These small people would land in a round object and welcome a few villagers aboard before flying off again. In the past, the tribal people of Charama even worshiped the paintings.

Done in colors that archaeologists claim remain fresh-looking despite being prehistoric, the images show humanoids dressed like spacemen and holding what could be weapons. The creatures are lithe, somewhat orange, and lack any noticeable mouths and noses. The alleged UFO image shows a disk-type object with three legs and what local archaeologists describe as a “fan-like antenna.” 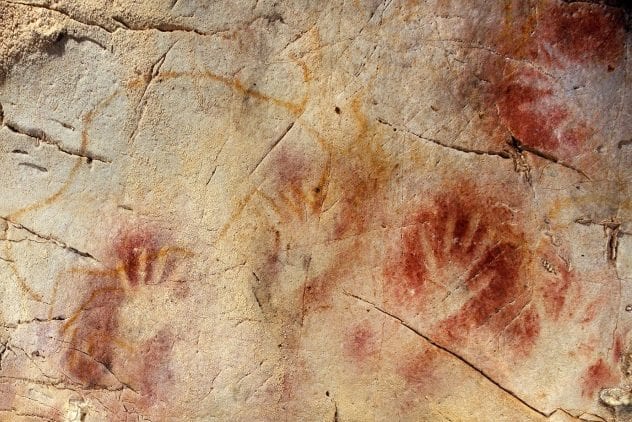 In Spain, an underground cave is making waves. On the walls of El Castillo are painted dots and hand stencils. The reddish creations are over 40,800 years old, making them the oldest known cave art. They might not even have made by humans. During the time of the art’s creation, the cave was a Neanderthal neighborhood, making it possible that they created the historic marks.

Neanderthals are seen as a separate hominid species, but this art could reclassify them as a race of humans instead. Scientific doubts over whether Neanderthals could even create art, let alone symbols, are being challenged by previous discoveries at Neanderthal sites such as pigment, beads, sculptures, and decorated bones. The way they progressed culturally was the same as Homo sapiens, a strong indicator that Neanderthals were also human and not another hominid species.