You’re digging in a peat bog. Your spade hits something a little hard. When you pull back, you see a face staring at you. Naturally, you call the police because you think you’ve stumbled upon a murder scene. Turns out you were right; someone was murdered, but it was centuries ago. Peat bogs have the ability to preserve human bodies in a remarkably fresh condition. Here are ten of the most amazing bog bodies ever discovered. 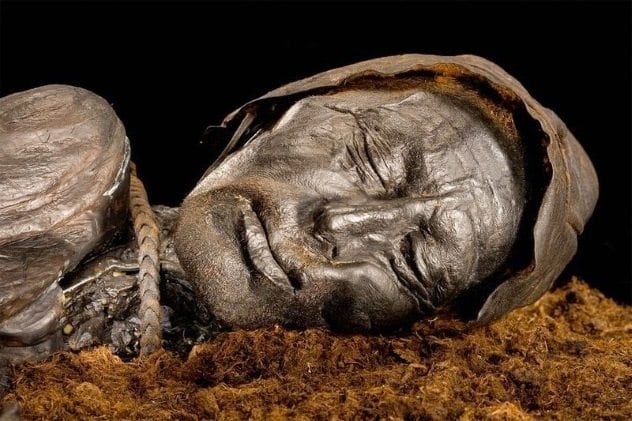 Peat bogs are ideal locations for the preservation of organic matter. They have low temperature, low oxygen, and a highly acidic pH. All of these work together to stop the breakdown of flesh. They also make peat a useful fuel for burning, which is why people dig around in peat bogs.

The scenario described above involving peat diggers calling the police because they thought they’d found a crime scene is exactly what happened when the body of Tollund Man was discovered in Denmark in 1950. His fresh, seemingly sleeping face, can be seen today in Silkeborg Museum. Despite appearances, Tollund Man lived in the fourth century BC.

Tollund Man was found with a rope around his neck. X-rays showed that his neck was not broken; he was hanged but died of strangulation rather than a quick drop. The body was in such good condition that the contents of its guts were able to be examined. Tollund Man’s last meal was some type of porridge. He also suffered from a worm infection.

Because of the way Tollund Man’s body was arranged as well as its location, it is believed that he was a ritual sacrifice. This is a conclusion we will see repeated again and again with bog bodies. 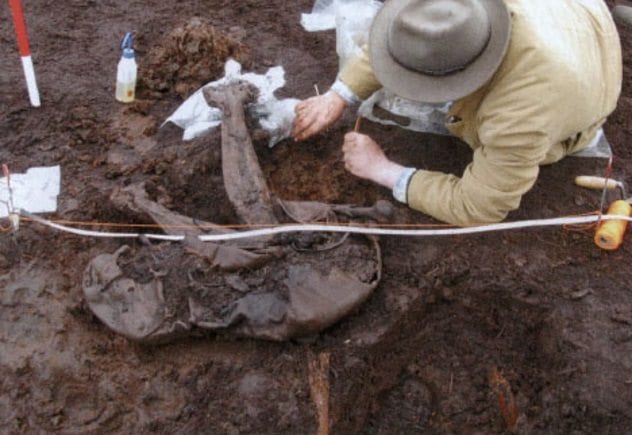 Cashel Man died around 4,000 years ago and is not so well-preserved as Tollund Man. His death, however, seems to have been far more violent. He was discovered in 2011 in Ireland, and he may have been a king.

Irish kings were invested with power through a ritual marriage to a goddess, meant to protect the land and people. If some calamity occurred, it was believed that the marriage had failed. Divorces can be nasty affairs, and it seems that for Irish kings, they were terrifying.

The king was taken to the bog below the hill where he was crowned. There, he was attacked and mutilated. Cashel Man’s back shows violent stabs and strikes. A sword wound on his arm may suggest that he tried to protect himself. Hazel rods were placed over him to mark the site. 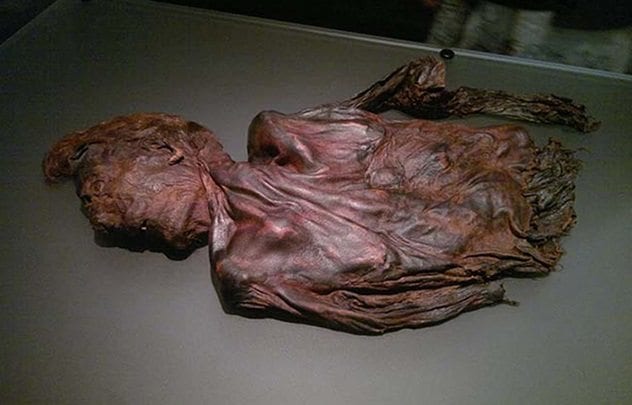 Old Croghan Man can hardly be called a man at all. Really, he’s little more than a head and torso, but he shows many signs of having been a man of importance when he died sometime between 362 and 175 BC.

Old Croghan Man was tall, standing 198 centimeters (6’6″). He would stand out today, but in an age of poor nutrition, he must have towered over his contemporaries. Analysis reveals that his diet was rich in meat, which was a luxury item at the time. There is a particular piece of evidence that Old Croghan Man was important (or rather a missing piece): His nipples have been removed.

For the ancient Irish, sucking the king’s nipples was a way of showing submission. Without his nipples, a man would be incapable of being shown respect and therefore couldn’t be king. This former king wasn’t shown much respect at the end: Holes were cut in his arms, and rope was passed through the holes to restrain him. He was stabbed repeatedly, disemboweled, and cut in two before being placed in the dank waters of the bog. 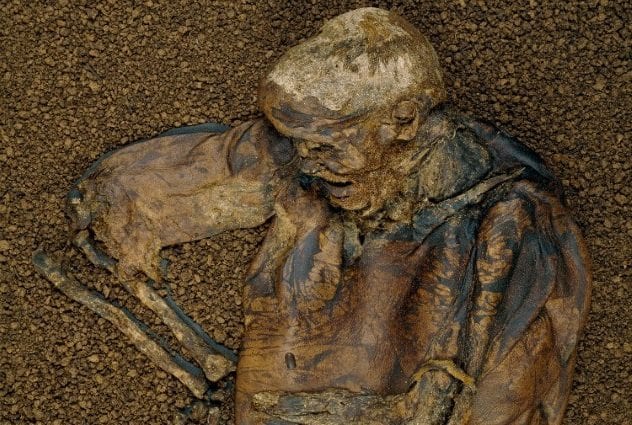 Lindow Man was the first well-preserved bog body found in the United Kingdom to be studied scientifically. Discovered in 1984, he was sacrificed sometime between 2 BC and AD 119, possibly while the Romans were in control of the country. The Romans outlawed human sacrifice, so this was either one of the later bog burials before the invasion or was done illegally.

Lindow Man was discovered when a worker in a peat processing plant took what he thought was a piece of wood from a conveyor belt. Some reports say he threw it at his friend, but whatever happened when he threw it, the peat fell off to reveal a human leg. The rest of the body was recovered afterward by archaeologists.

Lindow Man was brutally killed. A blow to the top of the head knocked skull fragments into his brain, but inflammation in the area showed that he survived for several hours. He was then stabbed and had his neck broken before being placed facedown in a pool of water. 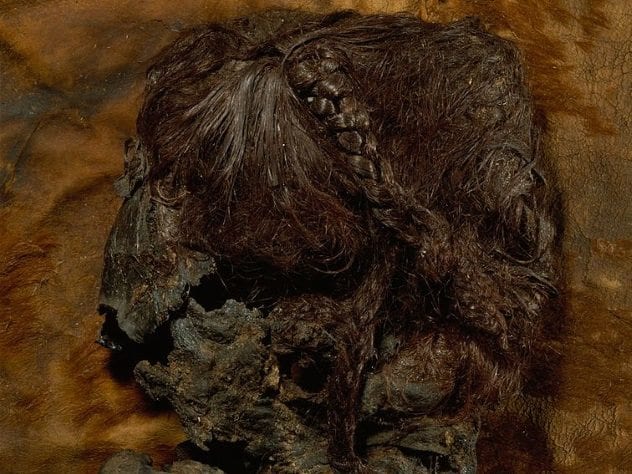 Elling Woman died around 280 BC and was found just 80 meters (262 ft) from where Tollund Man would later be discovered. Her presence and manner of death show that women could also be killed and placed in the bogs. Her remains indicate that she was hanged, but her clothes, stylish hair, and body placement make it unlikely that hers was a judicial murder. She shows all the hallmarks of ritual sacrifice.

When Elling Woman was discovered, she was thought to be the remains of an animal, but the woven belt around her waist revealed the truth. The back of the body is well-preserved, but the front was so decayed that the body was originally called Elling Man. The complex braiding of her hair suggested her true sex, which X-rays confirmed. Elling Woman was found with her cloak and an animal hide wrapped around her legs. The rope used to hang her was also found nearby. 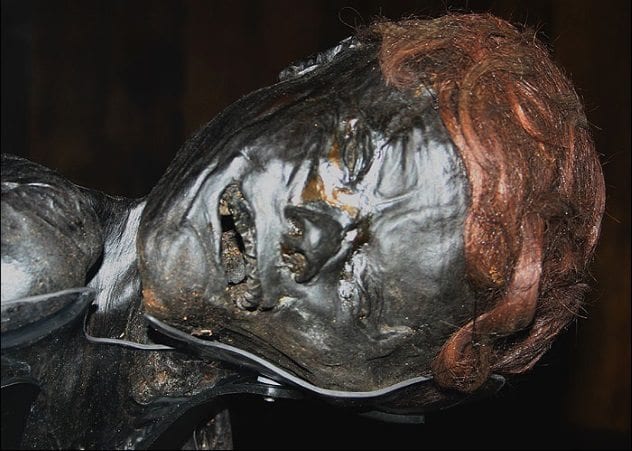 Grauballe Man’s face emerged from another peat bog in Denmark, well-preserved but misshapen. This is partly because his throat had been cut from ear to ear. Several bones in his body were broken, but it’s possible that this happened after death from the weight of the peat above. Grauballe Man died around 55 BC.

Because of Grauballe Man’s unusually well-preserved hands, we can tell that he never did manual labor. His nails were well–cared for and trimmed. His fingerprints could even be taken. Grauballe Man was discovered wearing only a cap and belt. It is possible that he was buried naked or that his clothes were destroyed by the conditions in the bog.

The most startling aspect of Grauballe Man is his shock of red hair. Analysis, however, shows that it was once much darker and was changed by the bog to its current color. 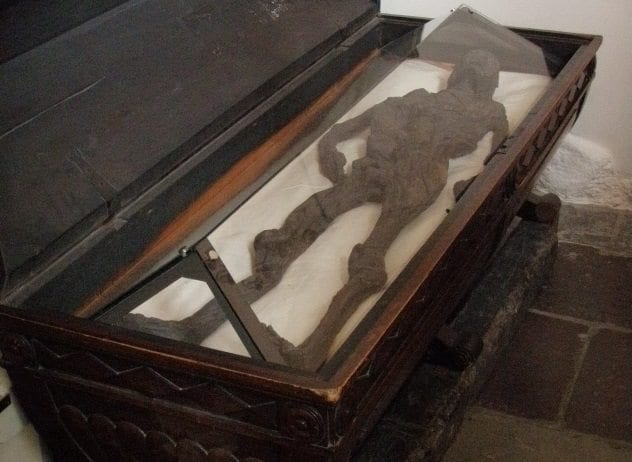 Haraldskaer Woman was one of the earliest bog bodies to be found. Found in 1835 in Denmark, it is also the earliest instance of a bog body being preserved. It can still be seen in a glass-covered sarcophagus in St. Nicolai Church in Vejle.

Because the body was discovered in Gunnelmose (Gunhild’s Bog), it was thought that she was the Norwegian queen Gunhild, who legend states was drowned in the bog. When she was discovered, the Danish king had her wonderfully carved sarcophagus made to house her.

Radiocarbon dating proved that the Haraldskaer Woman was not Queen Gunhild, but other studies have shown that she was a woman of some importance. They also show that whoever she was, she lived somewhere else before ending up in the bog. Traces of strangulation can still be seen on her neck. 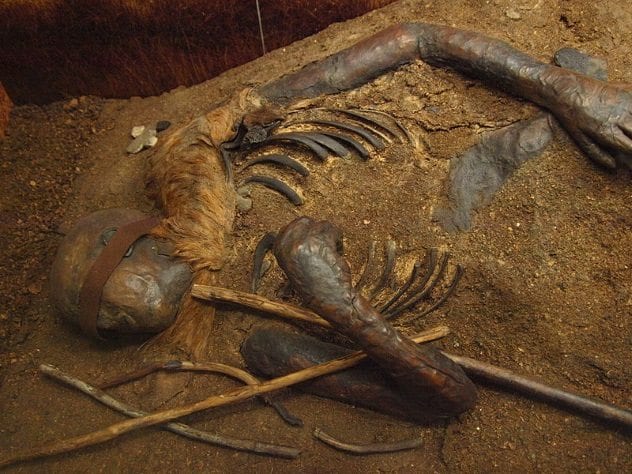 Windeby I used to go by the more personable name of Windeby Girl. Closer examination revealed that Windeby Girl was actually Windeby Boy.

Windeby I was found wearing a cap and a wool blindfold over his eyes. When the body was found, it was thought that the head was half-shaven, suggesting a ritual sacrifice. Instead, it is likely that half the hair simply fell off due to uneven preservation in the bog. The blindfold may simply have been a hair band, used to keep the young man’s hair from his eyes, that slipped down the face.

Analysis of the body also showed that unlike other, more high-status people recovered from the bog, Windeby I suffered from malnutrition and poor health. It seems likely that his was a simple burial after a death by natural causes. 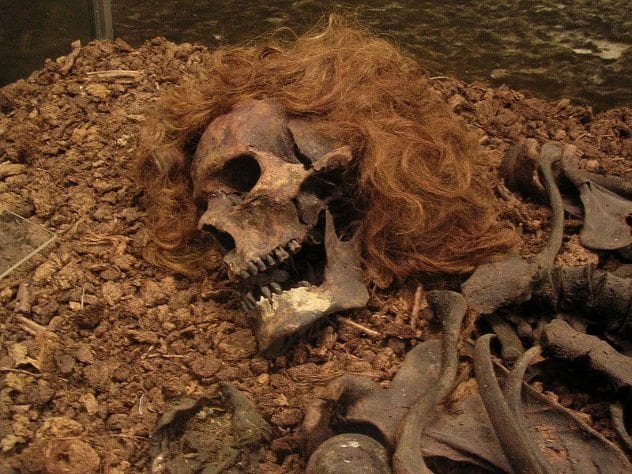 Bocksten Man wasn’t found in the same condition as other bog bodies. He had been reduced to bones, except for his glorious locks of hair. He was also buried much later than the other bodies on this list—only around 700 years ago. Bocksten Man was living long after the death of European paganism. This was no ritual sacrifice, even though he was found impaled to the bottom of a pool of water.

It has been determined that this was done in an attempt to hide a murder. Bocksten Man was struck three times on the head: once on the jaw, once by the right ear, and once on the back of the skull when he was already on the ground. This last blow would have proven instantly fatal.

The clothes found with the body show that Bocksten Man was well-off. Several theories have been put forward as to who he was. Maybe he was a tax collector (never a popular profession) or a recruiter for the army. We may never know the truth. Perhaps he was simply a rich man in the wrong place at the wrong time. 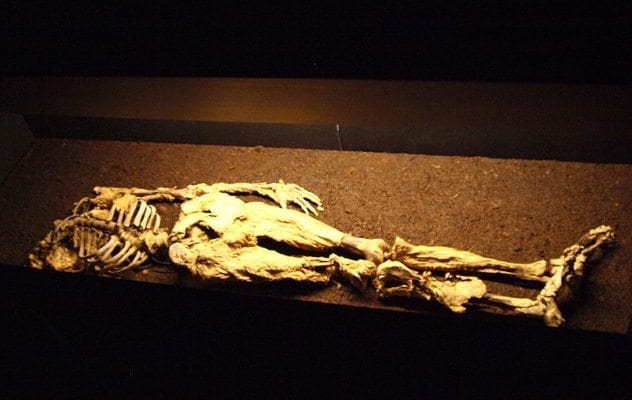 The fad for zombie movies appears to have died down recently, but don’t worry: They’ll be back. Zombies have been with us since at least the Epic of Gilgamesh, and it seems that people in Germany were equally worried about the dead coming back in the third century AD.

Datgen Man’s body was found before his head. His head was buried 3 meters (10 ft) from his body and was staked down. The body was mutilated after death and was also staked to the ground. The amount of care given to holding him down has led to the suggestion that whoever buried Datgen Man wanted to prevent him from getting back up. The German folk belief in the wiederganger (“one who walks again”) could be linked to the burial.