A meteor is an object that falls from outer space into the Earth’s atmosphere. It becomes a meteorite if it survives burning up in the atmosphere and reaches land. While human knowledge of our universe has expanded more in the last century than the millennia before, meteors have both affected and been recorded throughout history. Their sight has always brought awe and occasionally brought danger to their observers. 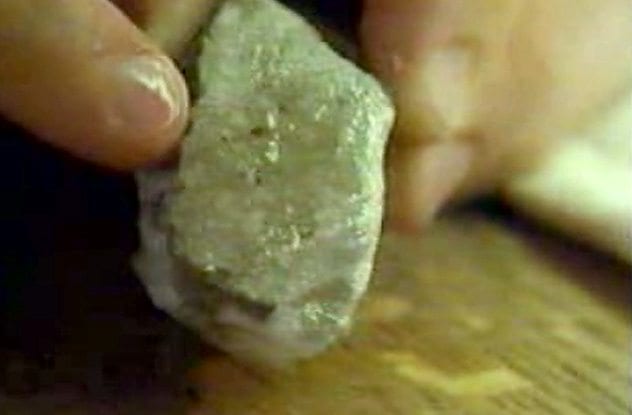 Off the coast of the Yucatan Peninsula, deep beneath the depths of the Gulf of Mexico, lie the remains of one of the most important and well-known events involving a meteorite in the history of the entire planet. Known as the Chicxulub Crater, a 125-meter hole is all that remains of the meteor responsible for the largest mass extinction event in history.

Roughly 66 million years ago, a meteorite roughly the size of Staten Island crashed into Earth. The impact was strong enough to start wildfires hundreds of miles away from the site of the crash. So much sulfur, ash, and other debris was flung into the air that it blotted out the Sun. For months, the Earth sat in perpetual darkness and a long, unexpected winter that would change the course of the planet forever. 75 percent of life on the planet (including the dominant species, dinosaurs) died off at this time. Mammals survived this apocalyptic event by being small and warm-blooded. A lack of predators following the meteor strike led to the rise of evolution of all mammals alive today, including humans and Internet list writers. 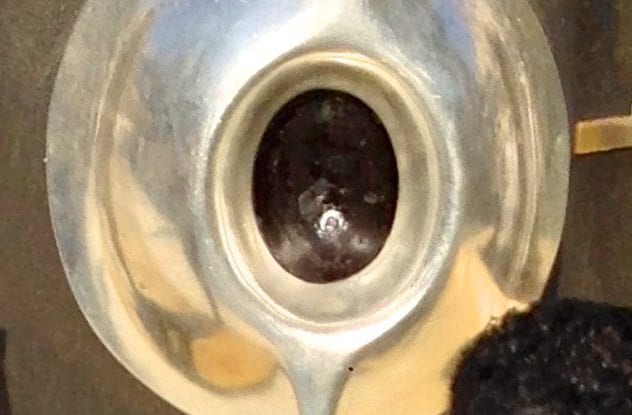 Every year, Muslims from all over the world make pilgrimages to the city of Mecca in modern-day Saudi Arabia. In this ancient city resides the Kaaba, the most holy site of the Islamic world. While no one knows quite how old this temple is (many Muslims believe it to have been built by Abraham), a stone that resides in one corner of the structure may hold the key to its ancient significance.

Encased in silver in the eastern corner of the Kaaba is what is only known as the Black Stone. Muslim tradition states that this stone fell from heaven to show Adam and Eve where to build their altar. Due to its significance, tests upon the stone are not possible, but this has not stopped scientists from proposing other sources for its origins. Geological evidence and nearby craters in the region lead many to believe the Black Stone may be an ancient meteorite. It is possible early settlers in the region did in fact witness the stone fall from the skies and believe it to be a message from Allah himself.

The boy pharaoh King Tut and his untouched burial site has drawn people’s attention and imagination since its discovery in 1922. Three years after his discovery, Tut still had a few secrets hidden up his sleeves. Scientists studying the mummy found two daggers within the young king’s wraps. A gold dagger was found near his abdomen and an iron one near his hip. It was the latter that drew historians’ attention, as iron was extremely rare during the Bronze Age in which King Tut lived, died, and was mummified.

Further studies into the blade’s nickel, iron, and cobalt composition lead most scientists to agree that the blade is of extraterrestrial origin, being crafted from one of 11 meteorites discovered in the Egyptian Kingdom during the time of Tut’s rule. The rarity and value of such a dagger meant that it would most likely have been used ceremonially rather than practically. 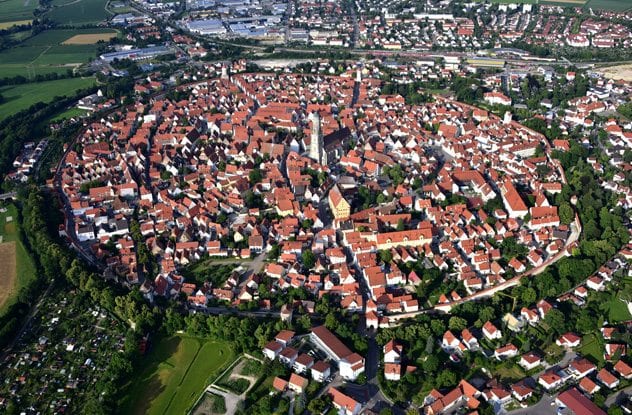 When viewed from above, the medieval German town of Nordlingen appears to be perfectly round. It was one of the only towns in Germany to still have its complete city walls still standing, and the reason for its round shape goes back millions of years before its founding in the ninth century.

What makes Nordlingen unique is that the city sits perfectly in a crater left by a meteor 14.5 million years ago. While the crater is roughly 25 kilometers across, the medieval founders built the walls of the city where the 1-kilometer-long meteorite sat millennia earlier. Remnants of the rock still can still be found literally within the walls of the city.

Up until the 1960s, the common theory was that the town was built in a volcano crater, but in more recent times, microscopic diamonds have been discovered within the walls and cathedral. These diamonds, while too small to be valuable, are remains of the meteor that struck down in the area years before the first humans would enter the area. 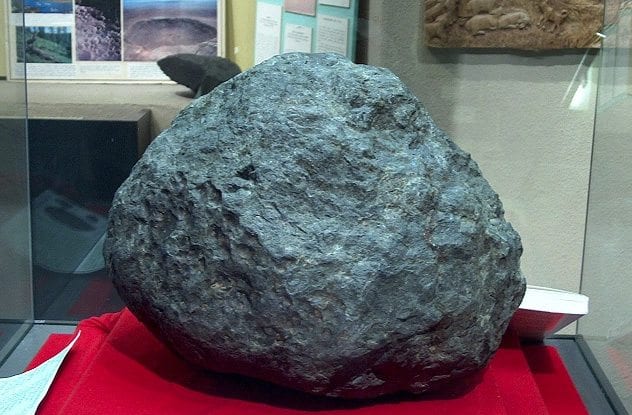 Only three months after Columbus set foot in the New World for the first time, a visitor came unexpectedly to visit the French village of Ensisheim. This visitor came in the form of a roughly 120-pound meteorite landing in a nearby field. Mentioned on this site before, the Ensisheim meteorite is the oldest preserved meteorite in the world. Though its impact was only witnessed by a single boy, the meteorite become an instant celebrity overnight.

People came from all over the region to take a piece of the stone for themselves, until church authorities claimed the rock and brought it back and chained it in the Ensisheim Church. Pieces were then given to the emperor and pope. Songs and stories were written about the stone, and it was viewed by many as a sign from God of either His blessing or wrath. Since the 15th century, the meteorite has become a symbol and point of pride for the town of Ensisheim, which it has never left. 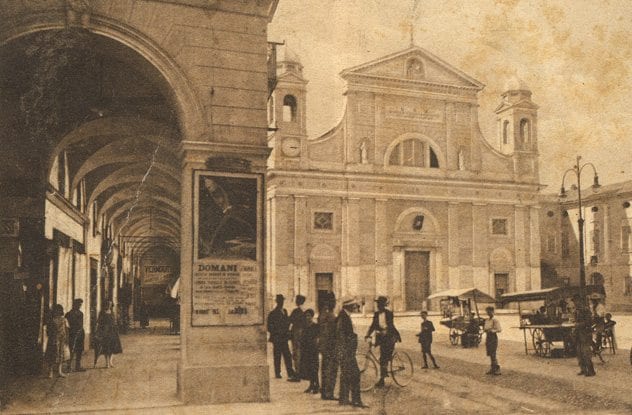 While the people of Ensisheim love their meteor, not all carry such warm feelings toward them. A report published in Tortona, Italy, in 1677 speaks of an unnamed monk who was killed by a meteorite. At St. Mary’s convent, a monk fell dead when struck by something that appeared to come down from the heavens. Many monks in the convent ran to his side to find a hole in his side. As one monk recorded:

“Impelled by curiosity, they enlarged the aperture to examine the interior of it; they saw that it penetrated to the bone, and were much surprised to find at the bottom of the wound a roundish stone which had made it, and had killed this monk in a manner equally terrible and unexpected.”

If this report is to be trusted, it would be the first and only recorded death by meteor in history. 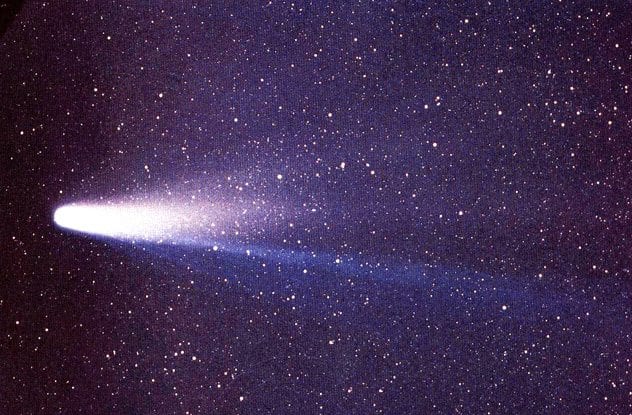 While not a meteorite, as it has never touched down on Earth, Halley’s Comet is worthy of note here due to its close ties to a famous historical figure. The comet is famous for its easy visibility and predictability. After making a tight cut around the Sun and shooting as far off as Neptune, Halley’s Comet appears in the night sky with its distinctive bright tail every 75 or 76 years—once in a lifetime, for many. Famed author Mark Twain was lucky enough to have been on Earth for two of Halley’s orbits, but both times, he was rather preoccupied. The first time it passed, in 1835, he was being born. Twain always felt a personal connection to the comet, stating:

“I came in with Halley’s Comet . . . It is coming again . . .  And I expect to go out with it . . . The Almighty has said, no doubt: ‘Now here are these two unaccountable freaks; they came in together, they must go out together.’ “

While he had no way of knowing how accurate his prediction was, sure enough, as the comet made its way past again in April 1910, Mark Twain quietly passed from this planet with it. 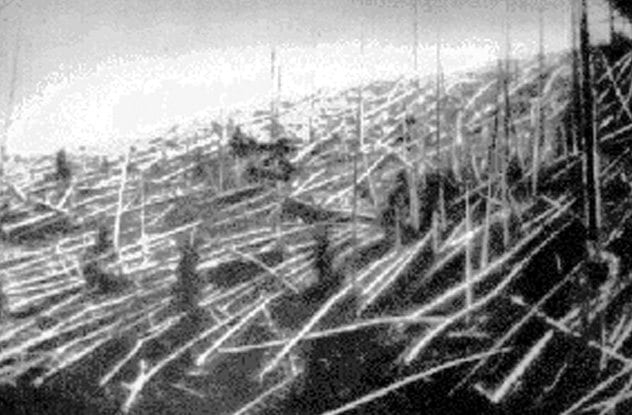 The Tunguska Event, which took place June 30, 1908, in Siberia, is the most well documented meteor impact event in modern times, as well as one of the most mysterious. Around 7:00 AM on the unassuming summer morning, windows shattered over 35 miles away, trees were blown on their side, hundreds of local reindeer died, and countless witnesses both saw light and felt heat from the blast as far away as Asia. The impact packed a punch as strong as 185 Hiroshima bombs. The only thing missing was the meteorite. Officials would not find a reason behind the explosion for almost 20 years.

While there were luckily no human casualties due its remote location, many locals were still reluctant to talk about it, believing that it was punishment from the Slavic god Ogdy. By following the path of blown-over trees, the mystery only grew when scientists found that ground zero did not contain a crater. At the center of the blast site, trees still stood but had been completely scorched of any branches or bark.

While there is still debate over the exact cause of the blast, NASA and other organizations agree a meteor approximately 120 feet across most likely entered the atmosphere above Siberia and detonated. The meteor is believed to have burned up before reaching the ground, explaining the lack of crater or evidence of meteor. 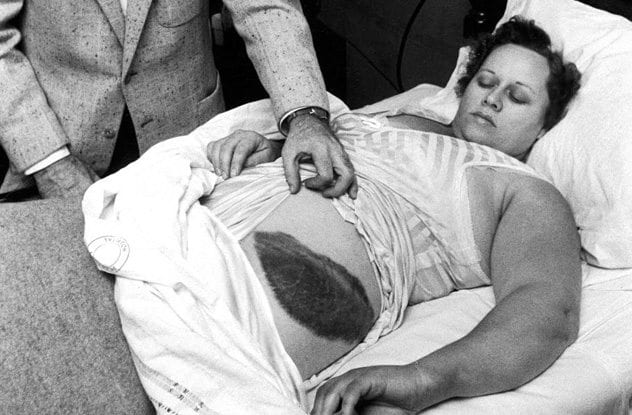 November 30, 1954, was not a very exciting day for 34-year-old Ann Hodges of Sylacauga, Alabama. It was so uneventful in fact that she chose to take a nap on her couch, a decision that shook things up considerably. As she dozed, an 8.5-pound rock came rocketing through her ceiling, bouncing off a radio and hitting her in the thigh.

Awaking confused and in pain, Hodges found a meteorite lying in the middle of her living room. While luckily only suffering some bruising, she became the first person in modern history to be struck by a meteorite. Hodges quickly found herself a minor celebrity, and her situation became even more well known during a year-long legal battle over ownership of the meteorite. It had been taken away by the local authorities, which led to the question of whether extraterrestrial objects belonged to the government in which they land, or if they fell under the age-old law of finders keepers. The case was settled out of court with the Hodges walking away with the rock, which was later donated to a museum. 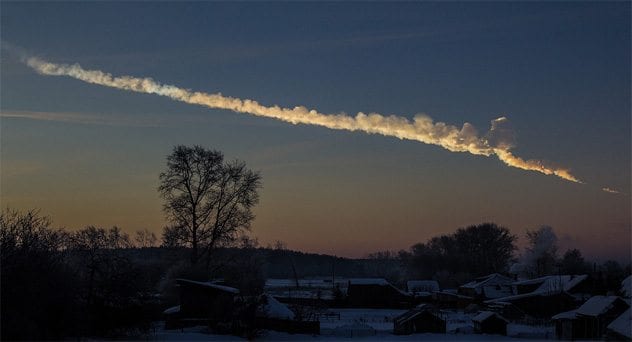 In what may be the best documented and recorded meteor event in history, a 20-meter wide meteor exploded over Chelyabinsk, Russia, in February 2013. The blast was the equivalent of 500 kilotons of TNT, knocking people off their feet, collapsing roofs, and shattering windows over 30 miles away. Over 1,200 people were hospitalized due to the explosion, the majority due to injuries from broken glass. Around four to six tons of meteorite fragments landed in the region, the largest chunk landing in a nearby lake.

When the Russian government recovered the rock from the lake’s depths for further study, they decided to take advantage of the meteor’s strike occurring so closely to the upcoming Winter Olympics they would be hosting. 10 of the gold medals given during the ceremony contained pieces of the Chelyabinsk meteorite in their center, giving the planet’s top athletes an award distinctly out of this world.

Henry Cain currently resides in California where he spends his free time writing and exploring.