Do not confuse labyrinths with mazes. Mazes are complex, multibranched puzzles. Labyrinths are single, nonbranching paths that lead to a center. Millennia ago, labyrinth designs mysteriously appeared throughout the world.

They have long been sites of religious devotion and healing. Many believe that they represented the border between the worlds of the living and the dead. They are meditation tools and instruments for wish fulfillment. Even today, they remain one of the most widespread yet enigmatic symbols.

The Russian White Sea is home to the highest concentration of Neolithic labyrinths in the world. The Solovetsky Islands alone contain 35. Dated to 3,000 years ago, they are known as vavilons (“Babylons”) by locals.

Bolshoi Zayatsky Island holds the archipelago’s most famous labyrinths. Fourteen structures cluster in an area under 0.5 square kilometers (0.2 mi2). Rows of rocks form spirals resembling serpents with their heads in the center. The largest structure is over 25 meters (82 ft) in diameter, while the smallest is around 6 meters (20 ft) in diameter.

All of Bolshoi Zayatsky’s labyrinths are located on the west side of the island. The eastern side has many rock formations, but none can be called labyrinths.

In the 1970s, Russian researchers proposed that the labyrinths had served as fish traps when the sea levels were significantly higher 5,000 years ago. Others disagree, suggesting that the labyrinths tracked the orbits of the Sun and Moon and acted as calendars. 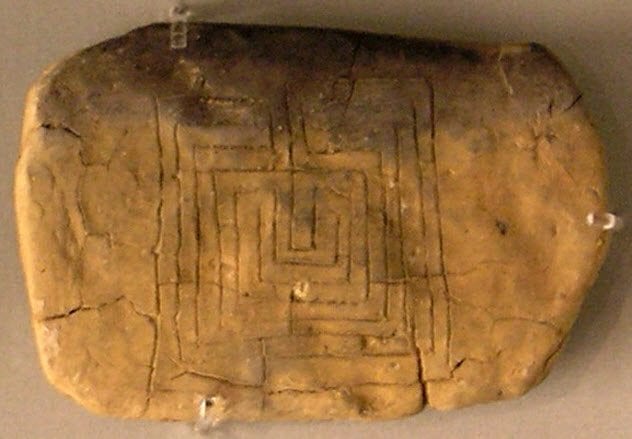 The labyrinth’s paths vary from 1.1 meters (3.6 ft) to 0.8 meters (2.6 ft). The discovery was made along an ancient trade route that connected Alagankulam and Palakkad Gap. Terra-cotta lamps and semiprecious stones found nearby attest to the area’s wealth.

Dated 800 years after the Indian version, the Greek version from Pylos is believed to be the oldest depiction of a seven-circuit labyrinth in clay. The Gedimedu labyrinth is the second biggest in India. In 2014, archaeologists announced the discovery of an even larger one in Tamil Nadu.

In India, it is common practice to paint kolams (“labyrinths”) on homes. Not only do they have magical powers, but they can also prevent the entrance of evil spirits. 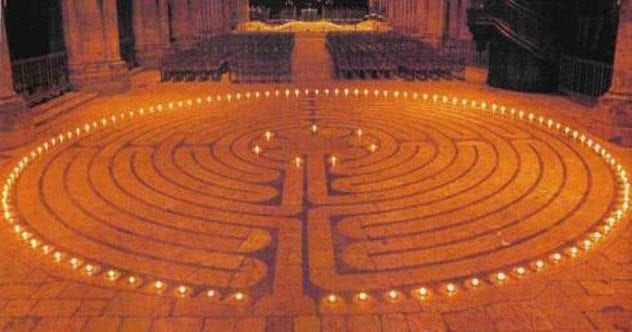 For 2,500 years, Chartres has been one of the most sacred sites in France. Druids revered the location, and Christians built a cathedral over the site.

Celtic priests believed that energy emanated from the ground there and revered the site’s underground waters, which were considered a panacea. Built over 25 years starting in AD 1194, Cathedrale Notre-Dame de Chartres is considered one of the world’s marvels of Gothic architecture.

In 1205, a labyrinth was constructed in Chartres Cathedral using ancient recycled stones. Measuring 294 meters (964 ft) long and a little over 13 meters (42 ft) in diameter, the path has been walked by monks and pilgrims in contemplation ever since.

No one is certain why the Chartres labyrinth was constructed. A 2001 excavation set out to prove that the center of the labyrinth was a tomb for the masons who built it. However, extensive digging revealed nothing to support their claims.

7 Man In The Maze 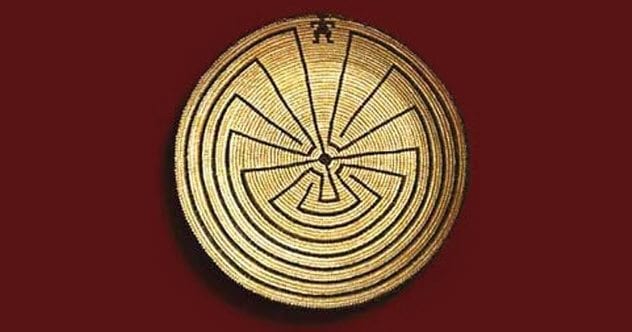 According to Southwestern Native American tradition, I’itoi is a mischievous creator god who crafted the ancestors of both the Tohono O’Odham and Pima people. The common “Man in the Maze” motif places I’itoi at the entrance to a labyrinth, which depicts the cycle of life and the choices we make. The design is widespread, being employed by Navajo silversmiths and Pima and Tohono O’Odham basket weavers since the early 1900s.

These Southwestern patterns are almost always seven-circuit labyrinths. A circle representing death and eternal life stands in the center. The paths begin at the periphery and approach the center. Each major turn directs away from the central circle.

While there are common interpretations to the design, there is no one meaning behind the “Man in the Maze.” Basket labyrinths contain an intentional mistake known as a dau (“door”), which allows the spirit of the basket to escape. 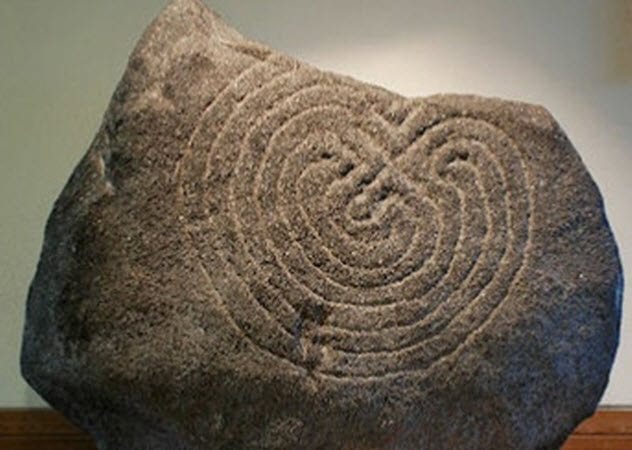 In 1908, ferret hunters stumbled upon a labyrinth-cloaked stone in County Wicklow, Ireland. Dubbed the “Hollywood Stone,” the 1.2-meter-high (3.9 ft) by 0.9-meter-wide (3.0 ft) stone was found lying facedown on a grassy lane. A small section of the labyrinth, which is 70 centimeters (28 in) in diameter, is missing.

The Christian design suggests that it dates to the Medieval period. No one knows the function of the Hollywood Stone. Some speculate that it was related to the pilgrimage site of Glendalough and may have been a sign for a “station.”

For millennia, labyrinths have been associated with pilgrimages. These journeys are often long, expensive, and dangerous. As some people cannot afford to travel to the Holy Land, substitutes were needed.

At one point, two pilgrimages to Glendalough were considered the spiritual equivalent of one trip to Jerusalem. As the years went by, the ratio slipped to seven Glendalough trips equaling one Holy Land pilgrimage. 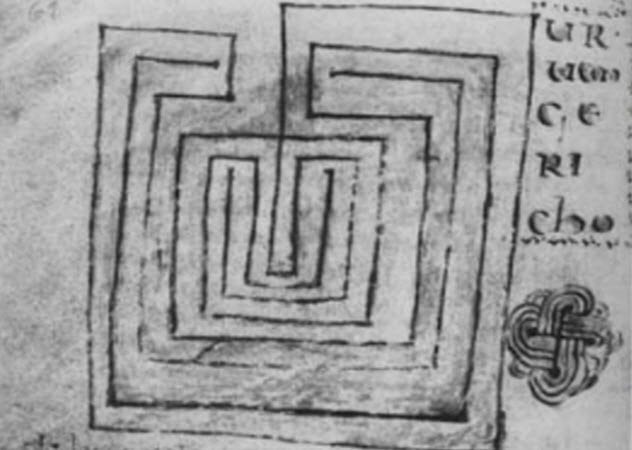 The Jericho labyrinth is one of the most mysterious Christian symbols. Several medieval documents refer to “Uruem Gericho” (“City of Jericho”) as a seven-circuit, Cretan-inspired labyrinth.

No one is certain why this motif is so pervasive. Some suggest that it has to do with a biblical passage: “By faith, the walls of Jericho fell after the people had marched around them for seven days.” Many Greek manuscripts attribute the invention of the Jericho labyrinth to King Solomon.

The earliest Jericho labyrinth came from a manuscript discovered at the monastery of Abruzzi, Italy. Dated to AD 822, the initially square labyrinth was later redrawn as a circle.

The first-known usage of labyrinths in Christianity comes from San Reparatus at El Asnam in Algeria. Dated to the fourth century AD, this ancient labyrinth has been identified as Christian due to the words in the center: Sancta Eclesia (“Holy Church”).

4 Labyrinth Of The Blue Virgin 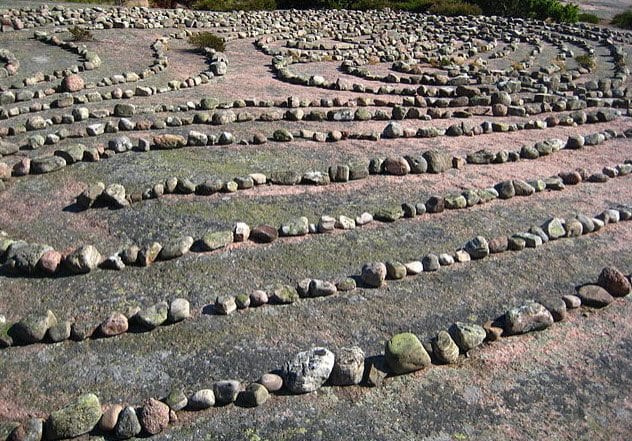 Bla Jungfrun (“The Blue Virgin”) is an uninhabited island in the Kalmar Strait off Sweden’s east coast. For centuries, it has had a reputation for the supernatural. To this day, visitors are warned not to stray off the paths and lingering after dark is strictly prohibited.

One of the most enigmatic features of this island of bare rock and dense forests is its labyrinth. The “Trolleborg labyrinth” is the largest in Sweden.

Many believe that the Trolleborg labyrinth has something to do with Bla Jungfrun’s role in the fishing industry. Labyrinths are particularly common on archipelagoes in Scandinavia. They were often associated with fertility or good luck.

No one knows when the Trolleborg labyrinth was created. It was already standing in the 18th century. There is evidence to suggest that it might be much older. In 2015, archaeologists reported discovering “distinct ritual features” in The Blue Virgin’s caves dating to 7000 BC. 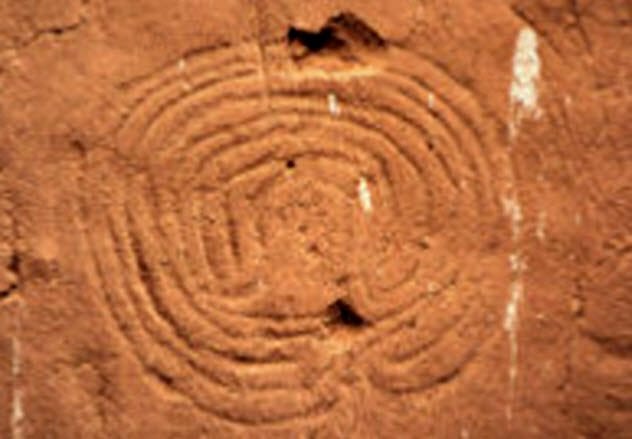 One of the world’s most controversial labyrinths exists in Arizona’s Casa Grande ruins. In 1694, Padre Kino set out to find the legendary “Great House” on the Gila River. He discovered “a four-story building, as large as a castle and equal to the finest church in the lands of Sonora.”

On the structure’s north wall, there is a complicated labyrinth design. For decades, this was the only known labyrinth in the Americas. However, it bore striking similarities to labyrinth designs found on 2,000-year-old Cretan coinage.

The possibility that such a complicated design was replicated by accident was deemed to be “almost negligible” by the National Park Service. However, in 1961, the journal Kiva published findings by researchers who had discovered a labyrinth that was “unquestionably prehistoric in context” at Gila County’s Upper Ruin at Tonto. For the first time, there was support that the Casa Grande labyrinth may have been pre-Columbian. 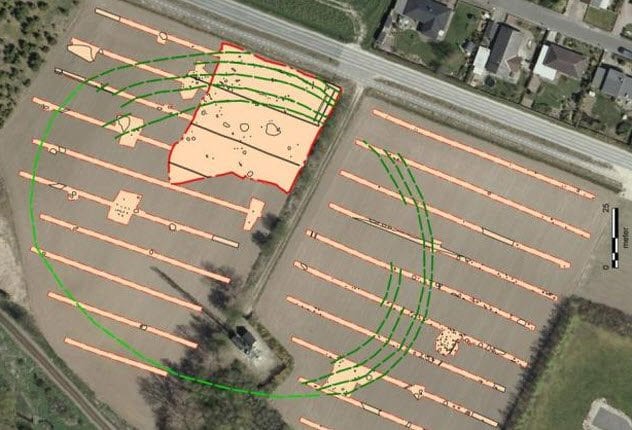 In 2017, Danish archaeologists discovered a series of mysterious Stone Age palisades that once enclosed an ancient labyrinth. Dated to the Neolithic period, the oval fence at Stevns covers an area just short of 18,000 square meters (195,000 ft2).

However, researchers believe that the Stevns structure served another purpose. The enclosure’s entrances were constructed through deliberate uneven placement of five rows extending outward.

Typically, palisades are constructed for protection. However, in this case, the poles were only 2 meters (7 ft) high and spaced far enough apart that someone could have easily squeezed through. One of the results of the uneven placement was that you could not peer inside into a common space.

This was likely an advantage in ritual contexts, where the practice inside the labyrinth could be kept secret. So far, no other structures have been discovered at Stevns. However, only a small part of the site has been excavated. 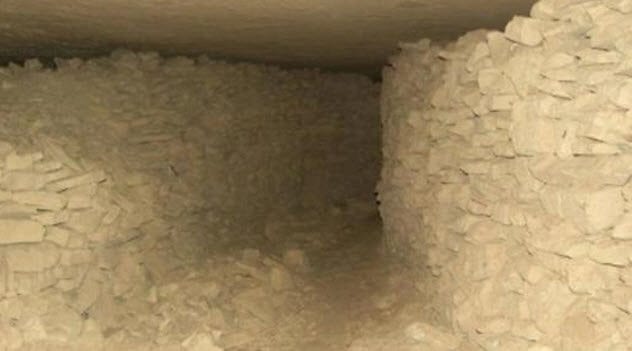 The world’s most famous labyrinth is not a labyrinth at all. According to Greek mythology, King Minos of Crete conscripted Daedalus to build the first labyrinth to house the Minotaur—the cannibalistic offspring of the liaison between the Cretan queen and a bull.

The Minotaur’s “labyrinth” is actually a subterranean maze, which the hero Theseus negotiated with a ball of string. For centuries, people have searched for the inspiration behind the legend.

Locals believe that an ancient quarry cave near Gortyn is the basis for this myth. Stretching nearly 3 kilometers (2 mi), the “Labyrinth Cave” is a complex of corridors and rooms leading nowhere.

English archaeologist Arthur Evans disagreed. Using Greek sources from the second century AD, he concluded that the labyrinth was located under the palace at Knossos. French archaeologist Paul Faure also disagreed, suggesting that a cave known as Agia Paraskevi near Skotino was the likely inspiration for the labyrinth.

Dubbed the “Indiana Jones of ethnomuciology” by TimeOut.com, Geordie McElroy has hunted songs for the Smithsonian, Sony Music Group, and private collectors. A leading authority on occult music, he is also the singer of LA-based band Blackwater Jukebox.