Highwaymen were the pirates of the land, robbing travelers along public roads leaving a path of terror in their wake. The following ten tales focus specifically on American highwaymen whose monstrous and murderous deeds throughout history have, until now, seamlessly faded from present day literature.

Between 1781 and 1788, the Doan brothers terrorized eastern Pennsylvania with a string of robberies, shootouts, and jailbreaks in what many historians claim was the result of retribution. Prior to their criminal ways, the brothers were Quakers until the Patriots confiscated their father’s land during the American Revolutionary War. In retaliation, the siblings began a life of debauchery and crime, ultimately forming a gang consisting of at least thirty men.

One of the gang’s biggest heists was the Newtown Treasury in which they made off with £1,307. None of the money was ever recovered. Unfortunately for the Doan brothers, their years of luck would soon run out. The oldest sibling, Moses, was shot and killed by authorities, while Levi Doan and Cousin Abraham were hanged in Philadelphia. The three remaining brothers managed to escape; Mahon is theorized to have sailed to England following his break-out from a Baltimore jail while Aaron and Joseph headed north to Canada. 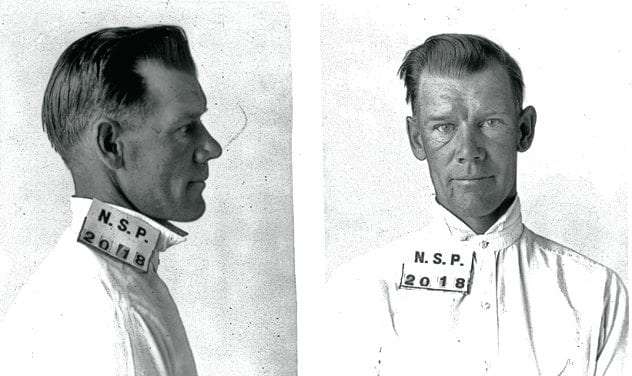 The last horse drawn stage robbery in the United States was on December 5, 1916, outside Jarbidge, Nevada. Fred Searcy, the driver of the first-class mail stage, was found shot in the back of the head with the culprits fleeing with $4,000 in gold coins.

Police later discovered, in the vicinity of the crime, a discarded black overcoat and a bloody envelope. The coat was recognized by townspeople to have belonged to Ben Kuhl, a troubled drifter with a lengthy rap sheet. Kuhl was tracked down and arrested along with three of his friends, one of whom would testify against him. In addition to countless testimony from several witnesses, the most damaging piece of evidence was the envelope containing the bloody palm print. For the first time in American history, palm prints were entered into court evidence, and this led to the Kuhl’s conviction and sentence of death.

After his death sentence had been commuted to life imprisonment, Kuhl was released at the age of 61 in April 1943. He would die of tuberculosis only one year later. 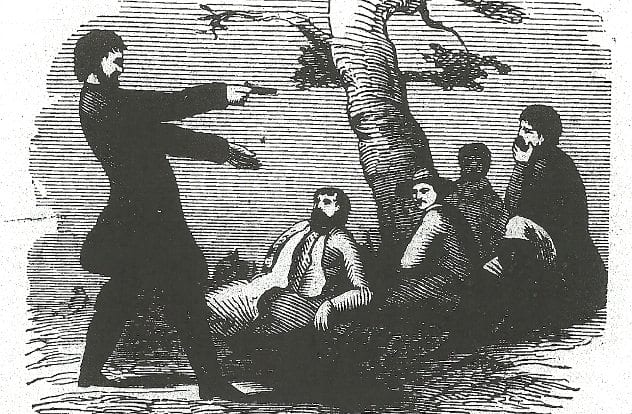 In 1790, Joseph Hare traveled from Pennsylvania to New Orleans upon where he befriended three men who shared the same conniving and murderous ways as he. On the men’s voyage back north, the four robbed and murdered countless peddlers and farmers while disguising themselves in a horrific fashion; smearing their faces with dark berries, allowing for a bloody and grotesque appearance guaranteed to cast fear. Throughout their coarse journey, they would encounter and trade with Indians, as well as obtain counterfeit passports for which they would be jailed by the Spaniards as American spies.
Following their early release, Hare began experiencing ghostly hallucinations on the wooded trails of the country, at one point witnessing a “magnificent white horse.” The apparition stopped Hare in his tracks long enough—following a recent crime in which he was in pursuit by a vigilante posse—that he was captured and spent the next five years in prison. Following his release, Hare declared himself a changed man. Despite his newfound sense of self, he was arrested the following year for the robbery of a Baltimore night mail coach. For this crime, Hare was hanged in front of a crowd of 1,500 people on September 10, 1818.

In Ireland 1816, 20-year-old Michael Martin was offered a “partnership” by a man he met at a tavern who went by the name, Captain Thunderbolt. Thunderbolt saw potential in Martin who was an exceptionally fast runner, thus, dubbed him “Captain Lightfoot”. Armed with brass pistols, Thunderbolt and Lightfoot began robbing wealthy highway travelers, never once stealing from women or the poor. Their chivalrous thievery brought the two all over Ireland, Scotland, and England until the day Martin made the journey to the United States, never again seeing his mentor Captain Thunderbolt. In America, Martin began his old ways by robbing unsuspecting people as he traveled throughout the East Coast.

Martin’s last highway victims were a Boston dignitary Major Bray and his wife. Following the robbery of $12, Martin made off into the night but was soon captured by authorities. While in prison, Martin viciously attacked a jailor which allowed him to escape and flee to the countryside. He was eventually recaptured in Springfield, and in 1821 he became the first and last person to be hanged in Massachusetts for highway robbery. 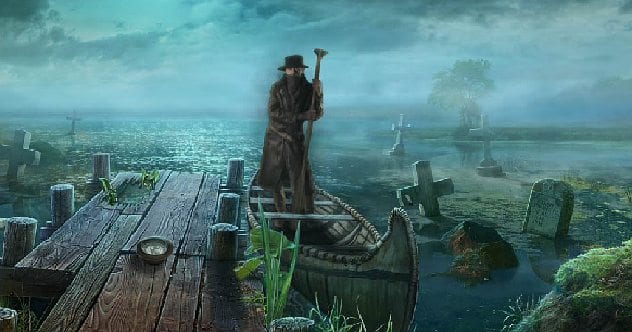 For a man who served respectable offices—Tennessee delegate, county Sheriff, justice of the peace, Captain of the Livingston County Cavalry, and overseer of the poor—James Ford was the epitome of service to his respected communities, yet what lay underneath the facade was a dark and sinister man.

Of the many talents Ford possessed, he was a well-skilled ferry operator who worked the streams of the infamous Cave-in-Rock waters. Ford, who has been described as “Satan’s Ferryman,” was nothing more than a skilled counterfeiter turned murderous river pirate known for creating the “Ford’s Ferry Gang”; a cast of degenerates who preyed on travelers passing through the vicinity.

Ford’s gang of hoodlums would ravage and murder the region for the better part of the 1820s until their reign of terror came to a sudden and unforeseen halt. In 1833, a mob of unknown vigilantes took the law into their own hands and assassinated the gang leader bringing to an end a decade of violence and death. 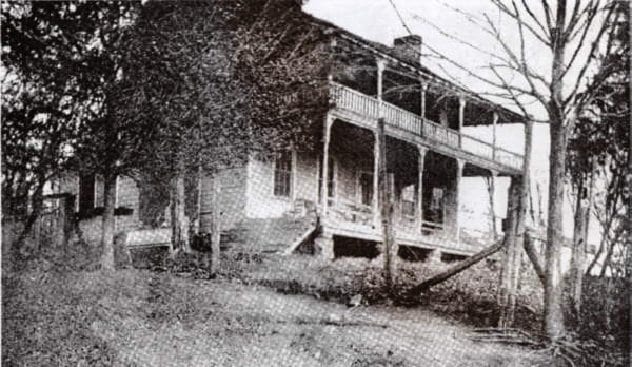 Even after the death of James Ford, lawlessness continued along the Ford’s Ferry High Water Road, only now the unsuspecting victims would first be made to feel right at home. Potts Springs was the location of Potts Inn, a quaint residence where travelers seeking food and lodging could lay their heads for the night.

The Inn was owned and operated by none other than husband and wife, Isaiah and Polly Potts who primarily catered to ferry goers. Whether renting a room for the night or merely stopping by the Inn’s tavern while passing through, the Potts would murder their guests and bury their remains in a shallow grave. In fact, one did not even have to be a guest of the murderous couple to fall prey, given that many travelers were killed along the route leading to the Inn. It is said that the Potts’ long lost son, Billy, was lured to the tavern and murdered, all the while both parties never recognizing one another. 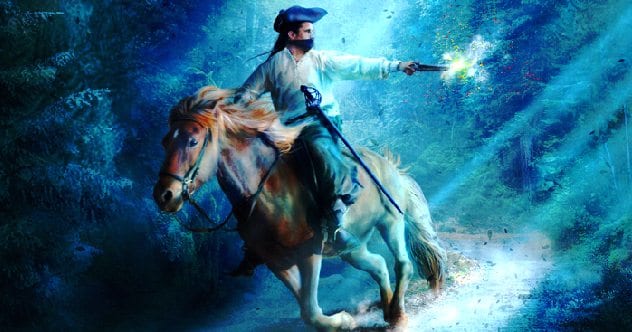 Soon after enlisting in the Army at the age of 17, David Lewis became a deserter. Escaping the death sentence bestowed by the Military Court, Lewis broke from the shackles of the ball and chain. He would soon make his way to Vermont where he embarked on a new trade, counterfeiting.

Following his second imprisonment, Lewis escaped with the help of his future bride, Melinda. After relocating his operations out of the Doubling Gap Hotel, Lewis focused his sights on the city’s elite, robbing those he assumed would bring in the highest amount. After a profitable succession of robbing the wagons of wealthy travelers, the “Robin Hood of Pennsylvania” was in due course wounded and captured. In the end, gangrene infested his wounds and he died in jail in 1820. 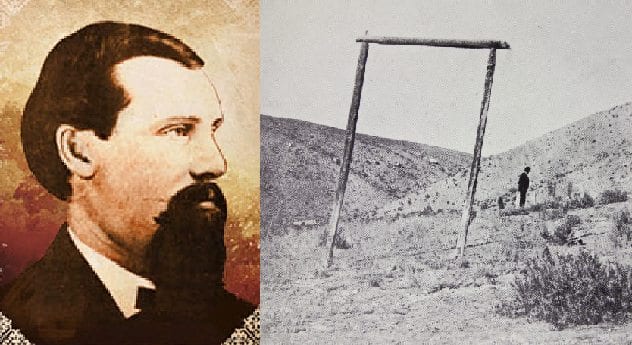 In 1856, Henry Plummer was elected sheriff of Nevada City, California and served two terms before he was convicted of second-degree murder for killing his mistress’ husband. Having served only six months in San Quentin before being pardoned by the governor, Plummer returned to Nevada City, this time he was elected to Assistant Marshal. Avoiding prosecution for killing a man in a whorehouse brawl, Plummer fled in 1861, ultimately settling in Idaho where he took up with a gang of highwaymen.

Due to his influence, the gang became known as “The Innocence” who robbed and murdered travailing miners. In 1863, “The Innocence” followed Plummer to Bannack, Montana, where he was elected sheriff. While in office, Plummer ran an effective and deadly criminal ring, providing his henchmen with the routes of gold shipments, as well as their protection, all the while the gang ran rampant in Bannack without the fear of ramification. After the robbery and murder of more than 100 locals, a team of nearly 2,000 settlers turned vigilantes captured and hanged a weeping Plummer and two of his men on the same gallows the crooked sheriff had prepared for another. 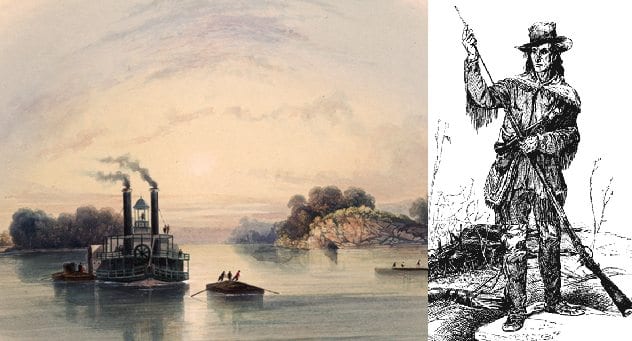 The infamous shelter for roaming highwaymen, Cave-in-Rock, became a temporary respite for Samuel Mason in 1797. The Ohio River, situated on the Illinois-Kentucky border, was the site of Mason’s criminal headquarters. He murdered all who trespassed through his waters. Mason’s river piracies involved setting up a sign near the cave that read “Liquor Vault and House of Entertainment,” leading many unsuspecting victims into a deathtrap.

Once aground, any and all were murdered by Mason’s heinous band of criminals, in addition to the countless who were attracted to shore due to the beautiful “stranded” women hired by Mason. The bodies of the dead were gutted and filled and with rocks so they would sink to the bottom of the river, while all valuables were sold in New Orleans.

After Mason and his accomplices were detained by Spanish authorities in 1803, they escaped en route to Tennessee after murdering the commander overseeing their transport to American territory. Because of this, the bounty on Mason’s head substantially increased, leading one of his gang affiliates to take note. In July 1803, Mason’s head was cut off by his trusted criminal associate, Little Harpe, who brought it back to Mississippi to claim the reward. 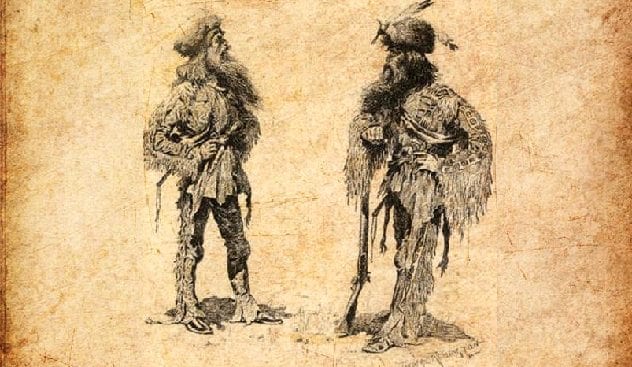 The Harpe Brothers are often referred to as America’s first true serial killers. Regardless of the assessments factuality, Micajah (“Big Harpe”) and Wiley (“Little Harpe”) left an endless trail of mutilated corpses throughout Kentucky and Tennessee, casting fear in the hearts of frontier families. They murdered not for financial gain, but for the love of the sport. Their lust for death proved even too much for fellow outlaws to bear, casting the brothers out of the Cave-in-Rock territory. Nevertheless, they continued their murderous spree of torture and disembowelment, with no discrimination pertaining to age, gender, or race. No one was spared. Their victim count is estimated to be between 25 to 50, although the actual number has never been known.

Big Harpe met his end from the blade of a tomahawk in July 1799. Subsequently, he was decapitated, and his head was fixed to a tree where it remained for ten years. Little Harpe escaped authorities and later joined the forces of Samuel Mason’s gang. After beheading Mason, Little Harpe strolled into town with the intention to claim his rightful reward only to be immediately recognized by officials. Consequently, Little Harpe was arrested and hanged in 1804.