Great movies are made by their plots, actors, visual effects, and sound effects. Sound effects alone have a hand in determining the success or failure of a movie. They add to every movement on the screen, and their timing is critical. If a sound designer has done their job properly, the sound effects they create will evoke the correct emotion in the audience.

Certain sound effects from our favorite movies are so iconic that the instant we hear them, we can envision the object or character they belong to. Most of us know the sound of the lightsabers from Star Wars without any visual representation, for example.

Many different, crazy-sounding everyday objects are used to create the unique sounds the artists envision, and animals are quite frequently the minor starts behind iconic sound effects. The interesting thing is that a lot of the time, we either don’t know an animal contributed to a sound effect, or we don’t know what kind of animal was used. Here are the top ten movie sound effects made by animals.

Fight Club is an intriguing drama about an insomnia-plagued office worker who is desperate to change his life and a soap maker with a devil-may-care attitude. The two meet and form an underground fight club that turns into something much more sinister.

Of course, in a fight club, there are going to be a lot of punches thrown. Director David Fincher wanted to set a new standard in the sound effects of someone landing a punch. Movies before Fight Club, including Rocky, had often used the same sound effect for all punches, and that wasn’t good enough for Fincher. So Ren Klyce and John Roesch, the sound designers, got to work on capturing multiple, unique punching sounds.

Roesch took a normal approach. He experimented with punching himself (now that’s dedication), heavy bags, leather items, and pieces of meat. Klyce, on the other hand, got creative. He also experimented with meat, but instead of simply hitting it, he used pigs’ feet for a more interesting sound. He then tried cracking walnuts inside chicken carcasses as well as shattering the chicken carcasses with baseball bats. While we can be sure that a variety of these experiments made their way into the movie, the chickens most certainly played their part in a few of those realistic, unique, and slightly sickening punches.

Creating sound effects from an iconic comic book series is a challenge. Comic book fans can get a bit particular about details, and if the job isn’t done as well as possible, the movie could end up a flop.

Craig Berkey and Stephen Flick knew what they were getting into when they took on the X-Men movie. Both were veterans of the comic book sound design world and had already successfully reimagined many traditional comic book sounds. Together, they worked to create a sound that would realistically capture the “snikt” of Wolverine’s claws. It required immense attention to detail, such as knowing exactly how long the CGI claws would be and the velocity at which they would be forced out and pulled back in.

For the sound of the claws exiting and entering Wolverine’s flesh, they knew they needed something visceral and real enough to not sound like a cheesy facsimile of the comic book version. To achieve this, they combined the sound of a blade being drawn from its sheath with the sounds of cracking nuts and, once again, chicken. Yes, once again we see the chickens giving their lives and being ripped apart for the sake of amazing sound design. The poor birds’ sacrifice gave this sound effect just what it needed to capture the feeling of metal forcing its way through flesh.

While the new Transformers movies get mixed reviews from fans, some of whom have been followers of the franchise since before it made its grand live-action debit on the silver screen, most can agree that the smaller, crazier Decepticons are very amusing.

Frenzy was one of those funny bots. Responsible for infiltrating Air Force One and stealing information, locating and attacking Sam Witwicky and Mikaela Banes (who decapitated him with a reciprocating saw), and infiltrating the Hoover Dam to awaken the infamous Megatron, this manic little guy can make quite the racket

Voiced by Reno Wilson, who is quite the vocal contortionist, Frenzy still needed a lot of sound effects to fit his evil, robotic self. Sound designers supported his speech and movement with the ticks of a metal wind-up clock and, strangely enough, the waveform cadence of the growls of a young cougar.

The Lord of the Rings – They have a Cave Troll (HD)

Some of the creatures of the world of Lord of the Rings were fairly simple in the terms of sound design. The howls of the wargs, for instance, were simply recordings of sound designer David Farmer and a pack of real dogs. Some, however, were a bit more complex. The orcs of Moria definitely took more effort, though due to the fact that they don’t speak much, Farmer had a more limited focus.

As soon as he saw the first image of the orcs, he knew he’d be looking for a type of seal to give the orcs their sound, but he also knew that he wanted to stay away from the oft-used sea lion sounds. It was while he was at the Marine Mammal Center in California’s Marin Headlands that he found his muse: baby elephant seals. They were perfect for the smallest orcs.

It’s a bit hard reconciling the image of cute baby elephant seals with the gruesome orcs, but it worked, and one must admit, Farmer definitely thought outside of the box.

Lord of The Rings – Battle of Helms Deep Opening

These differences meant that Farmer needed something with a much deeper, more intimidating voice. This time he used not one animal but three. The pain reactions were supplied by sea lions, while the more aggressive noises came from lions and tigers (but no bears, oh my). To make the effects more humanoid, he combined these with, you guessed it, human vocals.

Much debate has surrounded this old movie and who or what actually contributed to the iconic Tarzan yell. Johnny Weissmuller played the part of Tarzan and claims that he alone contributed the yell. According to him, he’d envisioned the yell more as a yodel when reading the Tarzan books as a kid.

MGM, which produced the movie, had a different story. They claim that Weissmuller’s voice was actually supplemented with the howl of a hyena, a soprano’s high C, the pluck of a violin, and the bleat of a camel. While no one will ever likely know for sure whose story is true, the yell was nonetheless a success, though it must be said that MGM’s claim seems a bit far-fetched.

Jurassic Park garnered much fame from its masterful use of the technology of the time, but most of the attention went to its stunning visual effects. Still, the amazing sound effects did receive due praise, and the roar of the T-rex was said to be the best of all other movies.

Sound designers achieved its realistic vocals with a lot of hard work. Since we obviously have no way of knowing what the T-rex would have actually sounded like, being that its only living relatives are birds and crocodilians, creativity was the name of the game.

The designers used a combination of the squeal of a baby elephant, an alligator’s gurgling, and a tiger’s growl for the chilling roar. The grunts actually came from a koala bear, which has a surprisingly low voice for such a small animal, and the sound of the dinosaur’s breathing was actually the sound of air escaping a whale’s blowhole. 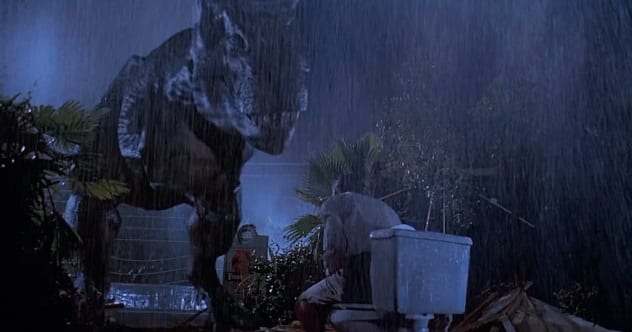 One of the most morbidly funny moments in Jurassic Park is the scene where Martin Ferrero’s character, Donald Gennaro, is eaten by the T-rex while on the toilet.

Interestingly, in the book, Donald’s character not only survives but heroically saves the children. However, according to Ferrero, when he accepted the job, Steven Spielberg told him up front that his character would be eaten, and what’s more, he would be eaten while on the john. Ever since, Ferrero has been recognized as the man who got eaten while going to the bathroom, and he’s fine with that.

But what made that vivid crunching noise as Donald was being chewed to bits? Why, none other than a happy horse munching on a corncob.

Chewbacca is one of the most beloved characters in Star Wars, and he didn’t have to speak a word—in English, at any rate. Loyal, funny, and fuzzy, his grunts and growls warmed our hearts. What created the language of Wookiee?

The voice of Chewie was created by sound designer Ben Burtt. Wookiee was a bit of a challenge to create, as Chewie didn’t have normal lips and could only open and close his mouth. Luckily for Burtt, bears actually do vocalize from the backs of their throats. It’s reported that a four-month-old cinnamon bear contributed much of the material, though there have also been rumors that three other bears, a badger, a lion, a seal, and a walrus from Long Beach may have also given their two cents.

Chewie was so popular that today, we have a small industry of YouTube tutorials giving step-by-step instructions on how to speak Wookiee.

Once again, Ben Burtt is behind an iconic Star Wars sound effect. The inspiration for the TIE Fighters actually comes from World War II Ju 87 (Stuka) dive-bombers, which artificially created a siren wail through special air ducts. The only propose of this was to make noise and scare people, and they did a good job.

Originally, the intent was simply to create the same feeling without the use of sound. However, Burtt combined slowed down elephant noises from a movie about a team off people trying to save African elephants from extinction with the sound of cars driving on wet pavement. According to Burtt, he put it in because he had no other alternative, and he was surprised when it got amazing reviews and became an iconic sound effect.

Crazy noises made by crazy animals can be a real lifesaver to a sound designer.

I’m a mother to a wonderful little girl, I love learning about random, bizarre things, and I’m a writing addict.