With a heaping dose of ‘health and safety hypersensitivity’, any family trip or neighbourhood party can turn into a boring, slow moving dull-a-thon. That grill is too hot, keep the kids away. How deep is that pool? That popcorn is a choking hazard, enjoy some celery soup with your movie. Sometimes, you have to live a little. Not with these products, though. The items listed below will burn you, choke you or pop out your eyes in a second. Enjoy. 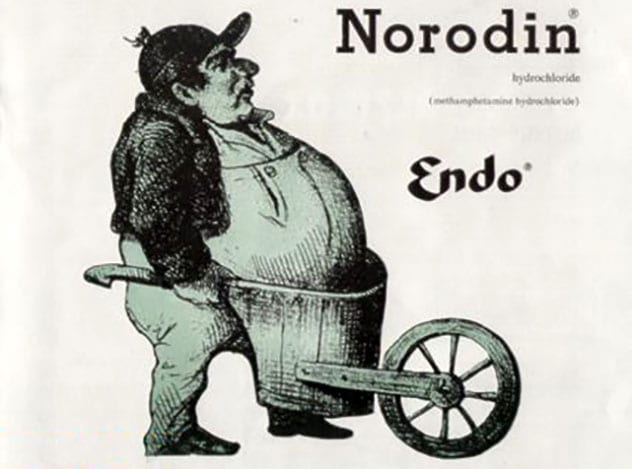 Who doesn’t love meth? Many happy customers the world over use this wonder drug to increase their ‘vim’ and ‘pep’ before engaging in the usual sorts of activities people like; robbery, prostitution and proclaiming oneself the messiah whilst nude at a public swimming pool.

People in the past were actually able to purchase methamphetamines legally. One brand named version of the drug was Norodin, marketed at ladies who wanted to lose weight. Speed was everywhere. You could even get a Benzedrine inhaler, along with a large scotch and the chicken set dinner, on PanAm flights in the 1940s. That’s exactly what you want on a long haul flight across the pond—a meth head in the middle seat. Speed was popular until a slew of high profile criminal cases all over the world pointed to abuse of these narcotics as a contributing factor. The business moved from control by pharmacists to your friendly, local drug kingpins, bringing an air of the home-grown and rustic to Meth.[1]

9 A Lot Of Stuff Made By The A.C. Gilbert Company 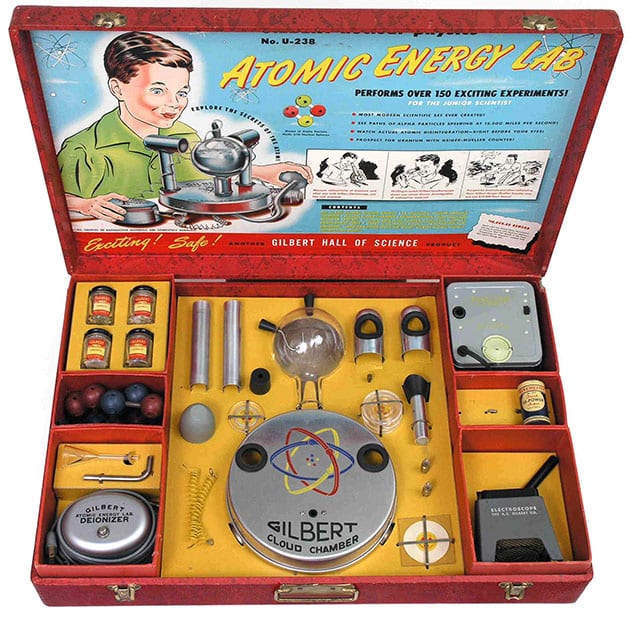 This company made some pretty cool toys. They also made some of the most dangerous ‘toys’ a kid could ever have the misfortune of playing with. Small cuts, light scalding, choking hazards and pinching injuries are extremely common in kids toys and always have been. Radiation poisoning though? A.C. Gilbert was a multi-talented inventor, but he really pushed the boat out on innovative ways to seriously maim children.

The ‘Gilbert U-238 Atomic Energy Lab’ allowed your budding Einstein to play around with different uranium ores that produced gamma, alpha and beta radiation. Fun! Gilbert also produced a glass blowing kit for kids (presumably so they could engage in the most disfiguring game of pea-shooters ever) and a chemistry kit which included a heaping pile of sodium cyanide, just in case lil’ Bobby jr. wants to bump off the Russian agent next door. Or make a really terrible milkshake for himself.[2] 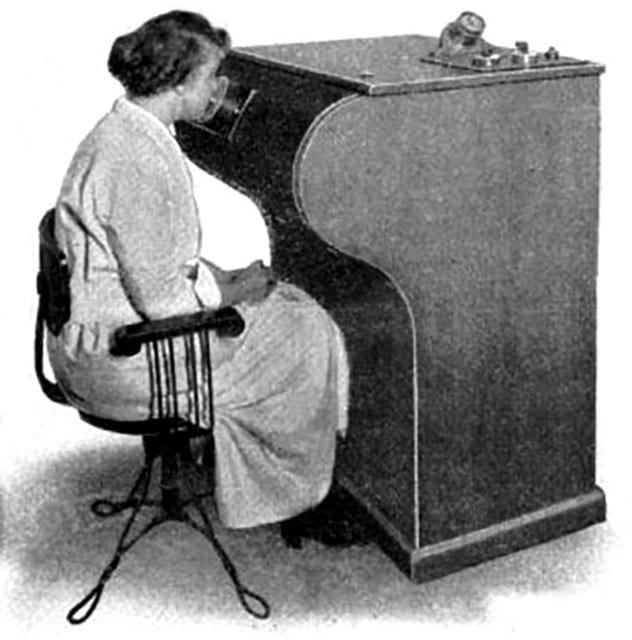 Waxing, shaving, epilating and laser treatments are the ways modern guys and gals use to remove those pesky stray hairs in problem areas. How did the ladies of the 1920s do it? X-rays. I shit you not one bit, folks. X-rays.

The ‘Tricho’ machines, once relatively commonplace in beauty parlours across the USA, were machines that focused doses of X-rays upon the customers’ cheeks and upper lip. This would, after upwards of 15 treatments a year, induce permanent hair removal. And malignant carcinomas. Possibly death. Given that hair removal beauty regimens are more common for men today, you may be curious if this could be just dangerous for ladies in the 1920s. Amazing!—the march of progress, scientific developments, am I right? Well sir, the next time you break your arm, do NOT enquire whether the guy or gal in charge of the X-ray machine minds doing your back, sack and crack. You’ll get rid of those hairs, but gain a few tumours.[3] 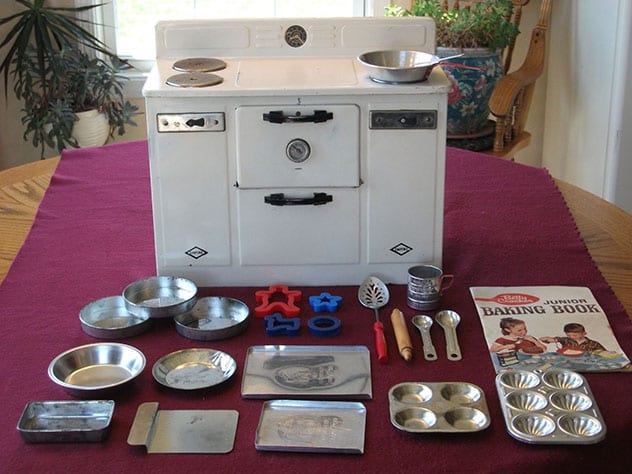 We’ve all read about the dangers of the once popular kids ‘Easy Bake Oven’. This popular mini oven allowed children to play kitchen for real. But for every hundred or so nicely browned jam tarts, you’ll end up burning yourself (we’ve all been there. Damn spun sugar, it’s basically napalm). When you scale it down and allow little kids to do the same, you’re asking for a trip to the burns unit with little Jinny or Jimmy. Imagine your kids’ toy oven could reach temperatures that exceed your own full-size cooker. That’d be the Empire Little Lady Stove.

Modern ovens will reach a temperature of around 550 degrees Fahrenheit before a mechanism clicks in, turning off the oven lest it burn the house down. This children’s toy could reach temperatures of 600 degrees Fahrenheit. That’s just about hot enough to bake some lovely chocolate chip cookies in 35 seconds. Ah, simpler times.[4]

Zulu warriors employed a whole host of deadly weapons when they went to war. Not blowguns, though. To the makers of this wonderfully safety unconscious game, that didn’t matter. Unsafe and tone deaf, a match made in hell!

This crazy game included a blowgun, paper targets and metal-tipped darts. So, an actual weapon then. This is the equivalent of handing a child a loaded Glock 17 and, without training, calling it their ‘new shooting game’. Have at it, kid. Gotta learn to larp sometime.[5] 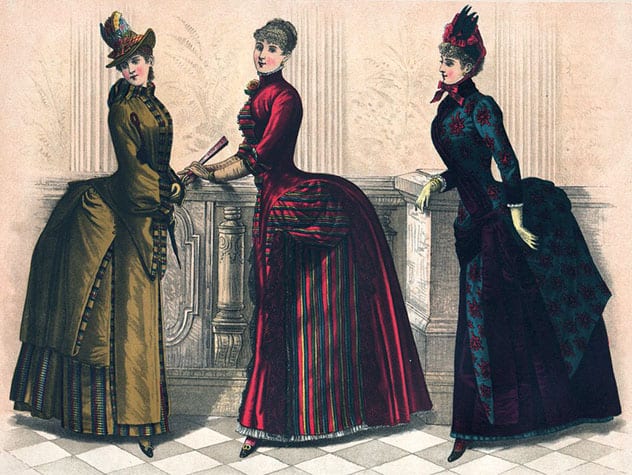 In the words of noted physician Dr. Nick Riviera, “Inflammable means flammable? What a country!” Once you get the definitions straight, now you can venture forth into the world and realise that a wire wool jacket may not be the best item of clothing to wear at the 9V battery factory. Victorian ladies had a hold host of incredibly easy to burn fabrics to choose from in a world that still employed candles and gas-fuelled flames for light. Muslin, gauze, all the open weaved cotton fabrics for dresses was a little like wearing a frock made of match heads. One of the craziest fabrics was flannelette.

The coroner of the city of Manchester, England put it best when interviewed for a local newspaper in 1898:

He noted that he had ‘held several inquests on children burned to death owing to their having played with fire in one way or another. Mr Smelt said there had been seven such deaths within a week that he had had to deal with, and he attributed the fact to the cold weather we had recently experienced. Children would go near fires to warm themselves; it, therefore, behoved parents to watch them strictly. They should also avoid dressing them in flannelette, which was almost as dangerous, if touched with fire, as gunpowder’. Still, those dresses looked pretty.[6] 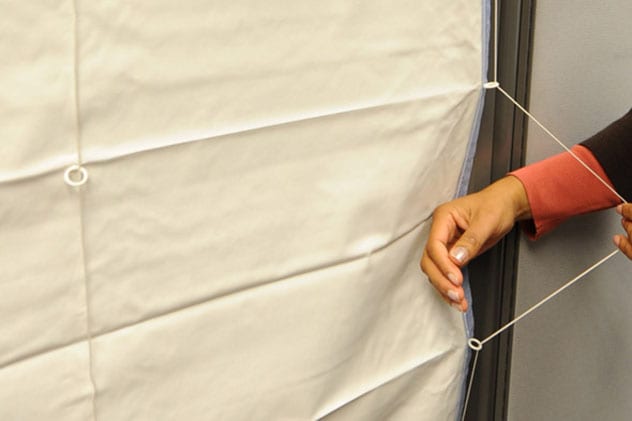 A few of these entries seem to cover danger to children. The toys are obviously going to be very kid-heavy, but window coverings? You better believe it. These fancier looking roller blinds are all but impossible to get in the USA these days, at least with the traditional pull cords.

You may think this is public safety run amok, maybe some crazy attempt to avoid lawsuits based on 1 or 2 kids getting friction burns or a toggle in the eye. But according to data gathered in 2015, more than 200 child deaths could be attributed to pull cords on window coverings. Huge retailers like Target and IKEA have now removed them from the shelves. Fair enough then.[7] 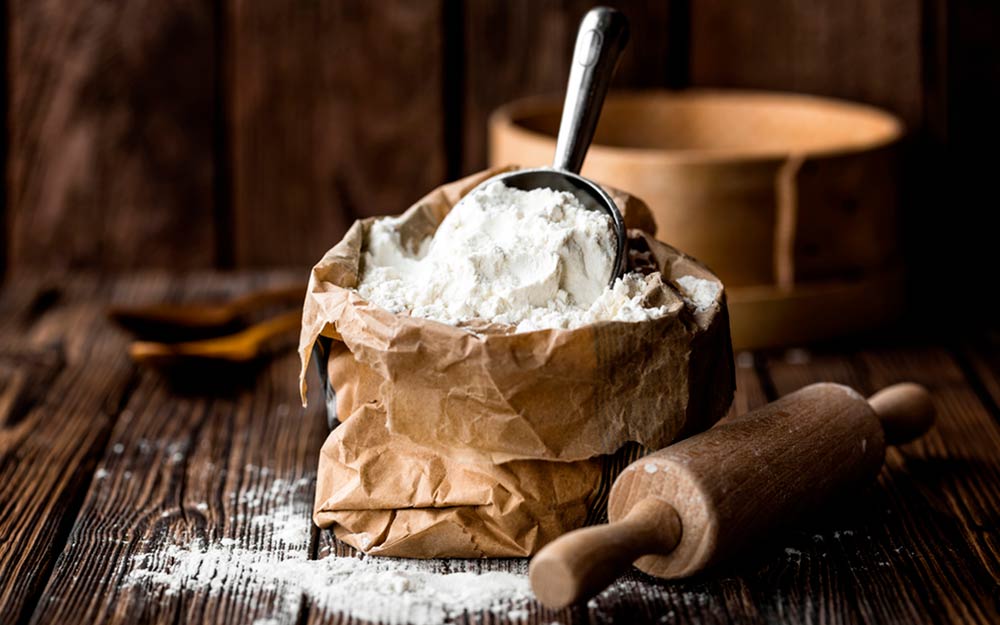 White bread was fancy stuff until the advent of sourdough and malted tin loaves with a honey glaze topped with mixed seeds. The whiter the bread, the ‘better’. As mass production and higher wages began to take hold at the turn of the last century, demand for good bread skyrocketed. How could bakers make shiny, brilliant white loves consumers wanted?

It’s all in the milling process. The whiter the flour, the whiter the bread. So they’d bleach the flour, artificially whitening the bread, the process getting better and better until you could buy a loaf that was whiter than Casper the friendly ghost’s taint. One chemical that was commonly used was nitrogen trichloride, or agene. In 1949 it was discovered that this process wasn’t producing flour that was safe for human consumption. Agene treated flour caused neurological disorders. How was this found out? Agene flour was also used in the making of dog biscuits, the dogs consumed them and showed signs of hysteria. Hysterical dogs—always a dead giveaway that something isn’t quite right.[8] 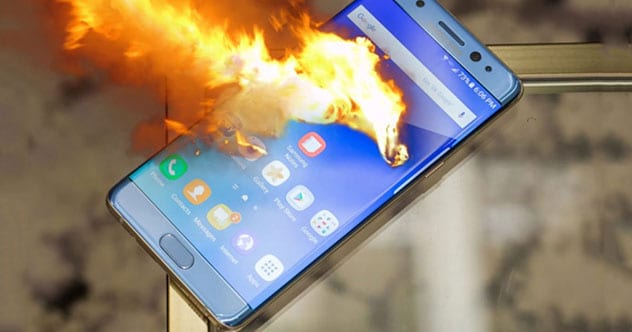 This phone blasted onto the market in August of 2016, becoming the latest hot property produced by South Korean tech juggernaut Samsung. It caused an explosion of excitement for users… before causing actual explosions due to faulty batteries.

First, the newly released Note 7s would go boom. Samsung told consumers that they could trade in their recently purchased faulty phones for a new, far less explosive one. The problem was that these new improved phones also tended to overheat and blow up. This led to Samsung pulling the plug. Alongside the many hundreds of disappointed consumer whose new devices had combusted, Samsung took a bit of heat too—to the tune of around $17 billion in lost revenue. Ouch![9] 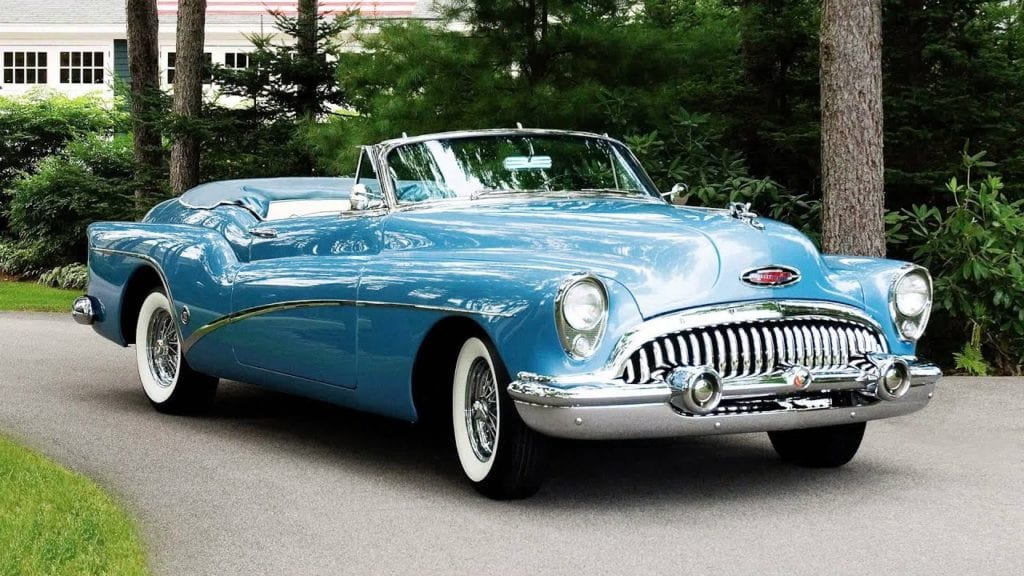 When you look at car accident photographs from the past (if you’re that way inclined), one wonders why anybody would buy a car back then. They were death machines.

Any petrol head, especially stateside, knows about the infamous Ford Pinto (available from 1971—1980) with its genius design innovation—the fuel tank was right next to the bumper at the rear of the car, making even the lightest bump to the back of the Pinto a potentially explosive crash. What about even further back in time? Well, the amazing Briggs & Stratton Flyer, perhaps the cheapest to produce car ever, was essentially a go-kart primarily made from wood. It had no doors. No windscreen. No safety tech at all. Looks fun, until you consider that the mere addition of a scarf to your driving apparel pretty much guarantees that you’ll lose your head.

Speaking of gruesome deaths caused by automotive accidents, here’s a fun fact for all you vintage car collectors. If you’re driving any car made before 1968, the steering column won’t be collapsible. So what? Well, if you get into a prang, the waist belt (chances are you won’t have a 3 point safety belt) won’t stop you getting impaled on the fixed steering column. Even much loved, iconic classic cars are incredibly unsafe. Say you fancy yourself a bit of a Marty McFly and buy a DeLorean. You’ll look cool as hell… until some jackass undertakes you and you swerve. The you flip over. Then you’re entombed in a metal sarcophagus, facing certain death. Why? Those cool-as-balls gull wings cannot open when the car is upside down. Bet you wish you’d made out with your teenage mother instead… “Great Scott!”[10]