It is always difficult to make a television show about a real person. Inevitably, the show will not be able to include every significant event in their life. When the subject is God incarnate, of course, it becomes even more difficult. Christ did, after all, manage to do quite a lot in His thirty-three years.

Not only does the director have to worry about being historically accurate, they also have to ensure that they don’t offend people, too.

Jesus of Nazareth was first aired in 1977, and it has become the most popular Bible story ever put to film. It featured an all-star cast of disciples and Romans and is often shown over the three days of Easter. In many countries, it even became a Christmas and an Easter tradition.

So, given its popularity, we thought that you might enjoy some somewhat trivial, but really rather fascinating facts about your favorite program about a historical figure, who is also the Son Of God.

Jesus of Nazareth – The Sermon On The Mount

Producer Lew Grade was looking for his leading man, when his wife suggested Robert Powell for the role of Jesus because of his ‘mesmerizing’ blue eyes.

This was said to have the effect of intensifying the piercing blue of his eyes so much that it gave him a penetrating stare worthy of the Messiah.

JESUS OF NAZARETH 1977 Descent from the Cross extended scene

Director Franco Zeffirelli wanted Jesus to be different from the disciples, and to develop a ‘visual mystique’ around him. He decided that he wanted Jesus to be able to see into the heart of the people that he met. One way that he achieved this was by refusing to let Robert Powell blink.

It proved to be an incredibly effective subconscious technique. Until it is pointed out, the blinking, or lack of it, passes unnoticed by the audience. Afterwards, however, it’s difficult to notice anything else.

Powell’s wide-eyed portrayal made him appear sincere and ethereal. And a little bit creepy. According to those that counted, the boy Jesus blinks twice while he is in the Temple, and the adult Jesus never blinks during the entire film. Except for the time after he is dead. As his lifeless body is cradled in the Virgin Mary’s arms, someone walks by, and Jesus gives an involuntary blink.

8 Zeffirelli’s Jesus was a Borgia 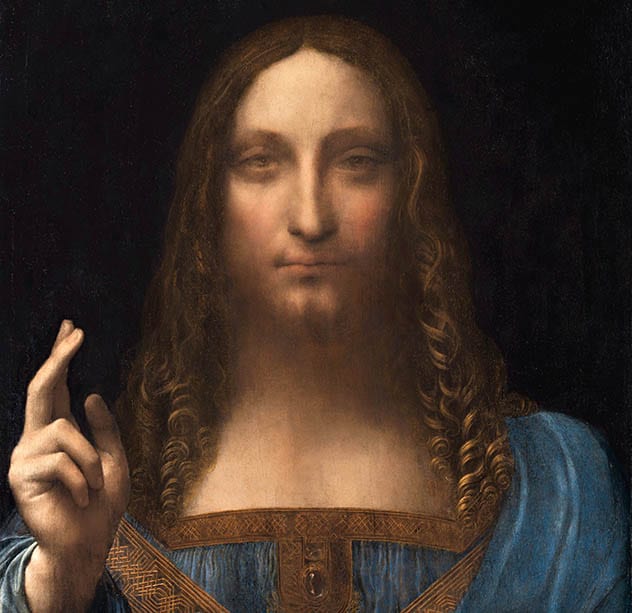 Why is Jesus portrayed as a caucasian man with long brown hair and blue eyes?

The historical Jesus was almost certainly none of those things, but traditional images of Christ had long been that way.

In fact, one of the reasons Powell was chosen, was because of his resemblance to the traditional image of Christ, which is popularly believed to be modeled on Cesare Borgia, considered in his time to be the most handsome man in the world.

Leonardo Da Vinci’s Salvator Mundi (pictured) is certainly believed to have been modeled on the tricksy Borgia, which is odd, considering that in his lifetime Borgia’s behavior was very un-Christlike, despite the fact that he was the son of a Pope. Da Vinci’s picture shows rather a feminine looking Jesus, with fine Renaissance clothes and long brown ringlets.

This image seems to have become set in the minds of religious painters, and the Borgia-Christ became the norm. Which was lucky for Robert Powell. And for audiences. Other actors under consideration for the role included Dustin Hoffman and Al Pacino. While undoubtedly both fine actors, they would definitely have been acting against type.

7 Jesus was a Droog 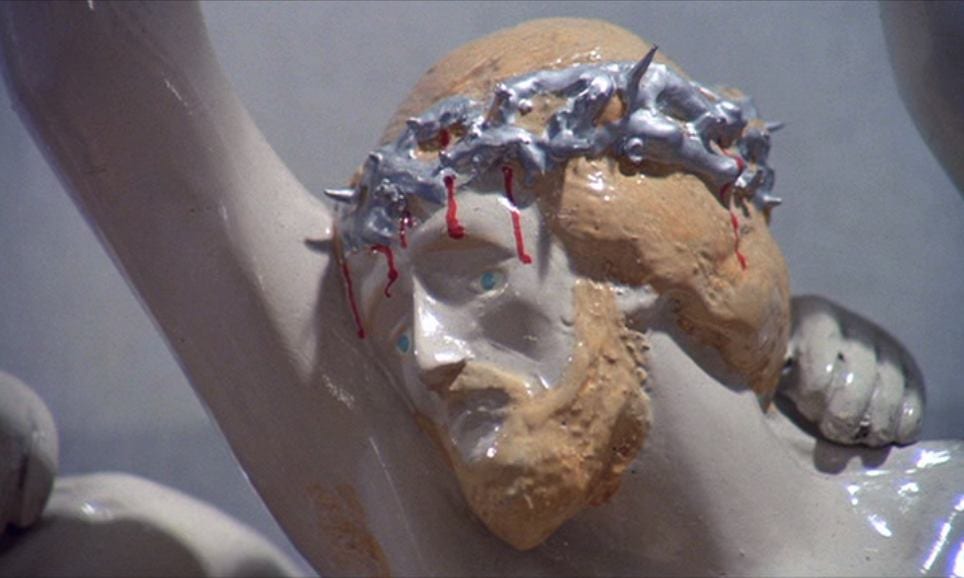 Jesus of Nazareth was conceived as a three-part mini-series, though it has been show in a number of different parts over the years. The screen-writer for Part One was Anthony Burgess, the celebrated novelist, and author of A Clockwork Orange.

Like Zeffirelli, Burgess was a Catholic, and relished the opportunity to tell the story of the life of Christ. Unfortunately, he only got to tell the first part. He was fired after he was caught writing a review of his own novel, which had been written under a pen name.

Burgess later claimed that he had become disenchanted with book reviewing, and believed that no one ever read them. He started to write ludicrous things about other writer’s works to see if anyone would complain, but no one ever did.

So when his own work came out, he took the opportunity to review that too. The review wasn’t even particularly flattering. He pointed out to readers of The Yorkshire Post that the novel was obscene, and warned readers not to bother with it. All of which was good clean fun, until another reporter outed him, and he was fired, both by The Yorkshire Post and by Jesus of Nazareth.

Jesus is Scourged and Crucified

When Robert Powell was preparing for the role, he went on an extreme diet, so that he would look gaunt and emaciated during the crucifixion scenes.

In order to drop weight quickly, he decided to forego the loaves and the fishes and restrict his diet solely to cheese. Which must have been hard. But it must have been harder still for the thieves who were crucified either side of him.

All those hours on the set. All that stinky cheese.

No wonder they all looked so pained.

5 There’s Just No Pleasing Some People

When Franco Zeffirelli agreed to take on the project, he decided that he wanted the project to be acceptable not just to Roman Catholics, but to people of all denominations. He took great pains to consult the leaders of a wide number of religions, discussing in great detail every scene, and every piece of symbolism.

He realized that he could not include every event in the New Testament, and he tried to reach a consensus on what was to be left out. He was keen, too, to ensure that the film was respectful of the Jewish religion. For example, while Zeffirelli was aware that the Bar mitzvah ceremony was a twelfth century innovation, he included it because he felt it would be recognizable to audiences.

If Zeffirelli was satisfied that he had got religion on his side, he was in for a big surprise. He said in an interview that he wanted his Jesus to be portrayed as an ‘ordinary simple man’. Bob Jones III, the fundamentalist Christian and chancellor of the Bob Jones University, took this to mean that Zeffirelli was denying Jesus’ divinity, and he immediately denounced the project as blasphemy, despite the fact that he had never seen any of it.

His denunciation carried some weight with his congregation, and it resulted in General Motors, who had backed the film, receiving 18,000 letters of complaint.

They withdrew their funding.

4 Jesus Of Nazareth Is a Silent Movie

The project was filmed largely on location in Tunisia. Local regulations required the shoot to employ local people as background artists. Unfortunately, many of them spoke little or no English. Undaunted, Zeffirelli shot many of the crowd scenes without sound and added it later in post.

It wasn’t only the extras who were dubbed, however. The actor Lorenzo Monet, who played the child Jesus in the temple, was also dubbed. Monet, who was Italian, had been asked to learn prayers in Hebrew, but mumbled them to the camera. So Zeffirelli replaced his speech with a dubbed version in English (now watch the video clip in item 5 again and you’ll see what I mean).

Even Robert Powell was dubbed on occasion. When Pilate asks Jesus if he is a king, we hear Jesus say yes, but his mouth is clearly saying something different.

But McShane’s character is not nearly so clear cut. While he does, ultimately, betray his master, it is not for money but for politics. He has, it seems, mistaken the message of Jesus, thinking that he was advocating revolution.

Thinking that perhaps Jesus just needs a push in the right direction, he gives up his friend, hoping that it will force Jesus to act, to fight back, and to instigate the overthrow of the Roman empire. Clearly someone wasn’t listening during the parables.

In Zeffirelli’s film, the 30 pieces of silver are given to Judas as a deliberate insult, and they are found spilled on the floor beneath Judas’ hanging body.

This portrayal may have made Judas a more sympathetic, and understandable, character, but again many fundamentalists didn’t like it.

The Jesus project was first suggested to Lew Grade by Pope Paul VI. The TV mogul had an audience with the pontiff, who complimented him on his previous show Moses The Law Giver, and expressed a hope that Grade might give Jesus the same treatment.

Grade was skeptical at first, believing that there would be very little appetite for such a project. However, he discussed the idea with Franco Zeffirelli who was known to be a deeply committed Catholic. Grade had, apparently, decided that if Zeffirelli said no, he would drop the whole idea.

The pope was said to be highly delighted with the result, which has become traditional Easter television viewing around the world.

When it was completed Paul VI was treated to a private viewing, after which he gave the show his seal of approval. He also thanked Zeffirelli for making it in a private audience.

1 Robert Powell Is the New Jesus 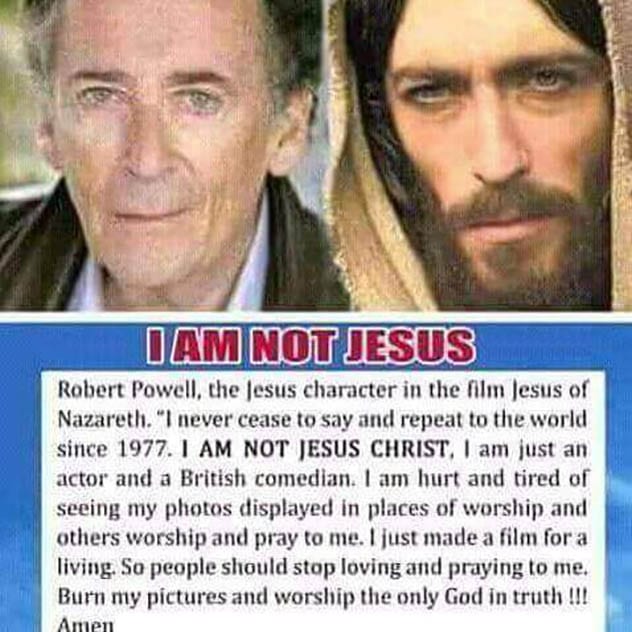 Just as Cesare Borgia’s image was used as the basis of countless paintings and statues in churches around the world, Robert Powell has now become the face of Christ for many churchgoers. However, when Leonardo Da Vinci used Cesare as a model, he did at least take the trouble to dress him in different clothes and change his hair style a little.

Many churches have replaced their old icons with stills from the show, and pictures of the actor Robert Powell, wide eyed, unblinking, and wearing makeup, can be found above many altars. He has even been mistaken for the actual Jesus in the street, which is weird.

Recently, he was forced to send out a message via social media to remind worshipers that he is an actor, and not the Son Of God.

About The Author: Ward Hazell is a freelance writer and travel writer, also currently studying for a PhD in English Literature