When watching or re-watching a horror movie or scary series, most fans can’t wait to get to the creepy stuff, after wading through the talking and other mundane activities that push the story along. This includes Regan’s famous head spin in The Exorcist and Annie literally cutting her own head off with a piano wire in Hereditary. And who could forget Leatherface’s skin mask scene? Creepy is what horrors are about after all, and while some horror movies and series are definitely better than others, most of them have that one chill-inducing scene that hardcore fans can’t wait to watch over and over again. Spoilers ahead.

Warning: Some of these clips are not suitable for sensitive viewers.

First off, mother! is not a movie for everyone. Javier Bardem and Jennifer Lawrence star in this insane film as a married couple whose lives are upended by the arrival of several uninvited guests at their home. While the house is systematically destroyed, viewers are shown a beating heart inside the wall (which seems to indicate that the house is alive). As the film progresses, there are several shocking scenes, including some kind of bloody organ inside the toilet, extreme sibling rivalry and a woman shooting people point blank.

The most unsettling scene however is the one after Lawrence’s character gives birth and her husband basically lets the newborn crowd surf through the throng of weird looters in their house. Lawrence tries her best to get her baby back but to no avail. The climax of this scene is nauseating and extremely shocking.

From one shocking baby scene to another: Lovecraft Country is not short on scares and has several terrifying scenes. This horror drama series is a continuation of the novel by the same name and does for horror what Riverdale is desperately trying to do for dark teen drama. Lovecraft Country is named after horror writer H.P. Lovecraft and breathes fresh life into old horror tropes.

There are some truly weird scenes and monsters in this series, but the one that will haunt your nightmares is the adult ghost sporting a baby’s head. This freaky-looking ghost is part of an exorcism scene and chases off some home invaders who probably will never break into a house again as long as they live after seeing it. The creator of the series, Misha Green, revealed that the inspiration for the ghost came from the infamous Tuskegee experiments.

Be warned, the end of this clip contains a very graphic and gruesome scene.

The Orphanage is a Spanish horror movie that centers around the inhabitants of an abandoned orphanage; both alive and dead. This film is a rare entity that builds suspense and fear without overreliance on cheap jump scares. At the end, viewers are left to wonder about what they’ve actually seen and whether the ghosts are actual ghosts or illusions. One of the spookiest scenes is also one of the simplest: it features a child in a sack-cloth mask who likes staring and locking people in rooms. See it for yourself here:

Channel Zero aired briefly on Syfy in 2016 and 2017 before being renewed for 2 more seasons. The show was finally cancelled in January 2019. This horror anthology series is based on creepypastas made extremely popular by the internet, including Candle Cove, No-End House, Slender Man, The Dream Door, and a whole lot more.

Candle Cove is one of the series’ most popular episodes and tells the story of a cursed children show that haunts a small town. Throughout the episode a chilling atmosphere reigns and the monster viewers are introduced to, is bound to hover in one’s mind for a while. The Tooth Child is unlike any other horror series monster, made completely from hundreds of teeth and has no discernible facial features other than a small gap for a mouth and two hollows for eyes. In this scene the toothy one puts a living person’s fingers in his ‘mouth’.

You will never think of the toothfairy the same way again.

Toby is the main creepy thing in Paranormal Activity and is instrumental in quite a few unsettling scenes. He sets a Ouija pointer on fire while the house is empty, creeps toward characters while they are sleeping, kills a man by bending him over backwards, makes the Xbox Kinect something people will be reluctant to use after watching the movie, and even bites people.

Toby seems most active in the kitchen for some reason. It is here that a sheet, seemingly with someone underneath it, falls into a puddle on the floor as the camera pans from side to side. It is also in the kitchen, in the second movie, that all the cabinet doors suddenly fly open at the same time, scaring one of the characters half to death.

5 The Haunting of Hill House – Horror in the dumbwaiter

In 2019, Netflix introduced one of the best horror series to grace screens in a long time. Viewers binge-watched all 10 episodes, and excitedly posted their ‘reviews’ on social media. Most were impressed and many were freaked out by the horde of ghosts, the most infamous being the Bent Neck Lady who was introduced in the first episode during a truly terrifying scene.

As the episodes progress, the ghosts become apparent as they crawl out of their hiding places, horrifying the living. One of the creepiest scenes happen in a dumbwaiter, with a messed-up looking ghost crawling towards the exit. The scene relies on atmosphere and choppy light to get the job done and the result is goosebump inducing.

4 The Conjuring 2 – The nun comes to life

In The Conjuring 2, there are a lot of hints as to the presence of the ugly nun, Valak. There are also a whole lot more jump scares than in the first movie, some successful, some hokey. Demonologist Lorraine Warren encounters a little ghost boy, a whole ghost family and of course, the aforementioned Valak in a scary sequence.

The nun’s scenes are the scariest in this particular film and freaked many moviegoers out solidly the first time they watched it. The part with Valak coming to life from the painting is very well done and still holds up against newer horror movies. Warren is wandering around when she spies a covered mirror (after running into the little ghost boy and family). Uncovering the mirror, looking over her shoulder and back at the mirror sees Valak materialize behind her. What ensues is the stuff of nightmares.

3 The Haunting of Bly Manor – Boy with no face 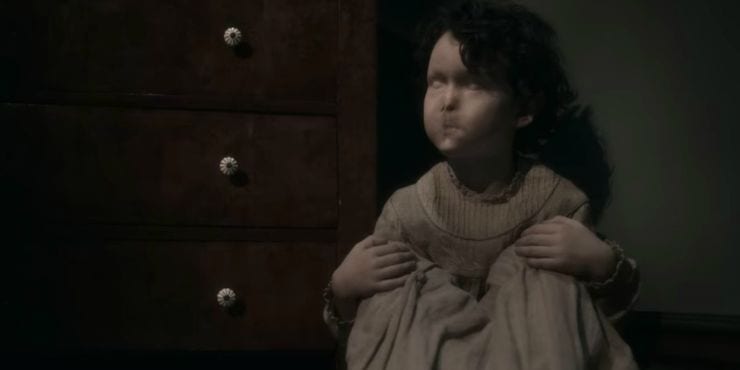 The follow up to Hill House is arguably less scary than its predecessor but it is the hallmark of fantastic storytelling (the accents aside). Sure, it starts off slow with just a couple of scary moments, but there are some frightening scenes including a silent man with shining glasses haunting an au pair, wheezing ghosts in period clothing and a lady in the lake that grabs whoever crosses her well-worn path.

Adorable 8-year-old Flora has a massive doll house that adds to the eeriness of the overall story, but things get truly weird after she sees a little boy playing with the doll house. One time she follows him and approaches him only to discover that he has no face. The story behind the faceless ghosts is eventually revealed but nothing is creepier than Flora ‘giving the boy a story’ and putting a new face on him. Which just so happens to be the face of a nightmarish-looking doll.

Comedy horrors can have scary scenes too as proven in The Visit by M. Night Shyamalan. Two siblings go to their grandparents for a week, to meet them for the first time and spend some time with them. Once there, things get weird when their grandparents start acting strange. There is gross projectile vomiting, requests for one of the siblings to climb into an oven and a dirty diaper smeared over the face of the other sibling.

Things are kicked up a notch in the scary department when it is revealed that the two old people are not the siblings’ true grandparents but insane imposters. Comedy flies out the window for a few moments when the old woman follows her ‘grandchildren’ around in a cramped crawl space beneath the house. The scene features her gallop-crawling towards them and makes for some anxiety-inducing viewing.

One of the best words to describe the American Horror Story series is ‘bonkers.’ The various seasons have given us a whole new meaning of the words “white wedding”, corpses turned into life-sized toys, a lizard girl, Mr Guinea Pig, exorcisms, and the controversial Addiction Demon.

Even more controversial than this demon, however, was the ‘Piggy Piggy’ episode that aired during season 1 in 2011. The inspiration for the episode is believed to have been taken from the real-life tragedy at Columbine and came a mere year before the Sandy Hook massacre. Controversy aside, some fans agree that the depiction of the school shooting in the episode is one of the truest depictions on TV. It also features a plot twist, in that the gunman is a character well known by fans.

15 students lose their lives in one of the most chilling scenes on TV.