No one enjoys commercials interrupting their program, especially when you see the same one repeat over and over again. It is always the same product or service as if you forgot, pitched to you by the same faces: Think of Flo from Progressive. Then overnight, these familiar women or men disappear from the screen. Though alleviating, you question their whereabouts considering you’ve only seen them a billion times in the past year. The following ten are spokesmen you may recognize with quite the colorful background or rap sheet.

The “Trivago Guy” who lends hotel advice to weary travelers displays a demeanor as a friendly, approachable, everyday Joe and frankly, he very well may be. One notable aspect from the commercials, however, is Tim Williams’ signature disheveled, rough-and-tumble appearance. A laid back, non-caring look as if he just rolled out of bed after a rough night in Vegas. Ironically, Williams may not be acting at all. In April 2019, the pitchman was found by Houston police passed out behind the wheel of a car in the middle of traffic. Now that is how to party! Following a field sobriety test, Williams was charged with misdemeanor DUI with bail set at $100. Being fortunate to maintain his job, Williams cleaned up his image for future commercial appearances looking more polished, yet not letting go of his signature facial stubble.[1]

Before Mike Lindell became a multimillionaire, he spent his life broke due to failed business ventures, all the while battling a serious cocaine addiction. In 2004, the idea for MyPillow came to him “in a dream.” In the moments that he wasn’t dedicating his time creating the perfect pillow, Lindell took up crack cocaine as his favorite pastime. This “hard-core addiction”, as he put it, led to the loss of his house and his wife divorcing him. At times he would be awake for a full two weeks smoking crack. Nevertheless, he continued working on the project simply because he believed the idea was a message from God. On the evening of January 16, 2009, Lindell prayed, “God, I want to wake up in the morning and never have that desire again.” As luck or faith would have it, he did just that and his journey on the road to sobriety began. By 2011, MyPillow was finally getting media attention and by the end of the year, he went from having 5 employees to 500. As of today, he has 1,500 employees, sold 30 million pillows and current revenue of $300 million a year.[2]

With an impressive resume with credits such as John Wick and 30 Rock, you can easily recognize Dean Winters as the crazed pitchman in Allstate insurance commercials. His life behind the camera, however, nearly came to an end in 2009, when his heart stopped beating en route to the hospital. The Allstate spokesman whose character causes mayhem wherever he goes contracted a bacterial infection subsequently causing cardiac arrest due to septic shock. After flat- lining for “around four-and-a-half minutes,” doctors at Lenox Hill hospital in New York miraculously “brought him back to life.” After three weeks in the ICU, Winters was discharged only to develop gangrene soon after. Over the next year, he underwent multiple skin grafts, 10 operations and had to have half of a thumb and two toes amputated. As one can imagine, it wasn’t his best year, perhaps even worse than 2020 – for him. Today the actor has fully recovered and has found a new appreciation for life with a career that has yet to slow down.[3]

The Very Best of Billy Mays

Billy Mays was a superstar in the infomercial world, pitching items such as OxiClean. The energy he expelled to audiences was exuberant enough to keep ones attention in the wee hours of the morning. Sadly, the liveliness he exemplified burnt out at age 50 on June 28, 2009 with questions still remaining as to why. Many speculate that it was the result of a head injury he sustained as a passenger on a US Airways flight the day prior to his death. According to reports, the plane hit the runway extremely hard upon landing resulting in one of the tires to blow out. The force of the impact caused baggage and other items from the overhead compartment to fly out, some striking Mays in the head. Following the incident, Mays recounted the events to a local TV reporter describing his injury jokingly stating, “I got a hard head.” That evening, he told his family that he wasn’t feeling well and retired to his bedroom. Mays was found dead in his bed the next morning. Although rumors continue to circulate as to the exact cause of death, what is known is that he had heart disease as well as a history of cocaine use. Whether or not these two contributed to his untimely demise, you be the Judge.[4]

Vince Offer, known as the spiky-haired “Sham Wow Guy” was known for his “schticky” jokes and sexual innuendos. With tremendous success, however, came a life of nonstop partying to the extent that would make Charlie Sheen proud. All of the exuberance would come to a sudden halt in 2009 after a 12-hour drinking binge with a prostitute. At some point in the evening, the lovely couple got into a fight leading to the woman biting Offer’s tongue, refusing to let go. Eventually, he was freed from the grips of her teeth only after plummeting her in the face with his fists as if he was channeling Mike Tyson. The romantic evening came to an end in the back of a police car with both parties being charged for aggravated battery. Surprisingly, Offer had a comeback four years after his infamous sex scandal slugfest. Determined to clean up his act, he began pitching a new product: a six-in-one kitchen cleaner named the “InVinceable.” These days, Offer is remaking himself and cutting back to only an “occasional glass of wine.”[5]

They say any publicity is good publicity, but what about when someone dies in your establishment? That is what happened at The Heart Attack Grill in Las Vegas when 52-year-old John Alleman, spokesman for the restaurant, dropped dead of a heart attack. The Heart Attack Grill (HAG) is famous for serving unhealthy dishes such as its “Quadruple Bypass Burger” and “Flatliner Fries” served to you by staff dressed in nurse’s and doctor’s uniforms. Alleman was a fixture at the HAG with his face on menus, appearing in commercials and even receiving his own “Patient John” clothing line. Interestingly enough, Alleman’s death comes one year after another patron died while eating the 6,000-calorie “Triple Bypass Burger.” As he clenched his chest gasping for air, patrons believed it was a publicity stunt. Like many people these days, they stood around with their cell phones filming him take his last breath. If that weren’t enough, a woman suffered a similar incident two months later while eating a “Double Bypass Burger.” The first HAG opened in Chandler, Arizona in 2008 but closed its doors in 2011 after the death of its 29-year-old 575-pound spokesman Blair River. In closing, if you’re ever in Vegas and you want to gamble with your arteries instead of money, HAG is the place to be. Oh yea, and if you weigh over 350 pounds, your meal is free![6]

Popcorn icon Orville Redenbacher, known for his Red Bow tie and cheerful commercials, had his first buttery taste of success in 1971. That year, Chicago’s department store, Marshall Fields became the only retailer carrying his product. Soon after, Redenbacher’s gourmet popcorn and wholesome image were seen in stores throughout the country. For a gentle and genuine man reminiscent of a grandfather, Redenbacher met an unflattering end in the Jacuzzi of his condominium. When his lifeless body was discovered floating in 1995 medical examiners were bewildered, questioning if there was foul play. Then again, he was 88-years-old and upon autopsy, it was reported that he had a heart attack and subsequently drowned. Today, Redenbacher remains the leading brand among microwave popcorns.[7]

Colonel Sanders, one of the most iconic figures in franchise history had quite an interesting life before his success with KFC. In 1932, Sanders was operating a service station across the street from another. To promote his business, Sanders painted advertisements on overpasses and on the side of barns. This advertising strategy angered Matt Stewart, the owner of the other service station, leading him to paint over Sanders’ signage. When Sanders became aware of this, he and two of his employees confronted Stewart. Moments later a gunfight ensued leading to the death of one of Sanders’ men who had been shot through the heart. Sanders immediately returned fire wounding Stewart bringing an end to the carnage. Sanders and his surviving employee were cleared by authorities while Stewart on the other hand was convicted but appealed. Nevertheless, Stewart would ultimately be shot and killed in another altercation a few years later. Upon hearing the news of his death, the kind-hearted Colonel offered Stewarts daughter, Ona Mae, his sincere condolences as well as financial support. Ironically, the two would become dear friends for the remainder of his life. In addition, Ona Mae went on to manage Sanders’ Café in 1940 and became a partner in the KFC franchise.[8

The Tragic Life of Judith Barsi

Her name may not come to mind, but Judith Barsi had an impressive list of credits in the short years she was alive. Appearing in several films including, Jaws: The Revenge, the majority of Bari’s work was in over 50 commercials throughout the 1980s. The little starlet was on the rise when her life was violently taken by the hand of her own father, József Barsi. On July 25, 1988, 10-year-old Judith was asleep in her bed when József, in an alcohol-induced rage, shot her in the head. He then murdered his wife, Maria Virovacz, in the hallway of the home. József spent the next two days in the house before pouring gasoline on their bodies, setting them ablaze and ultimately shooting himself in the head. Though it’s been three decades, the current owners of the home believe Judiths presence remains. Soon after the Bernal family moved in, they began feeling a constant dark presence and noticed cold spots for no explicable reason. In addition, the Bernal’s daughter, Gaby, began suffering horrific nightmares while sleeping in the same bedroom where Judith was murdered. The garage door would open and close by itself at all hours of the day and footsteps would roam the halls at night. Whether or not you’re a skeptic in the paranormal, the Bernal family undoubtedly believes the little pitchgirls spirit walks the halls of the house, unable to let go of the past.[9] 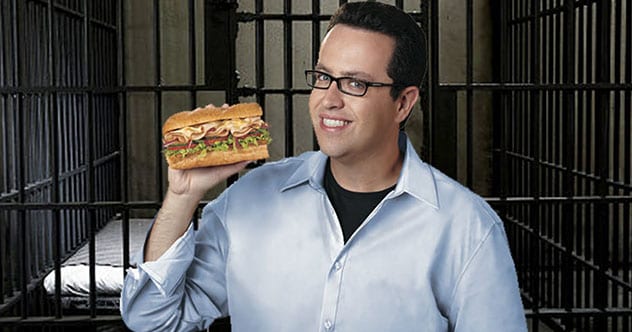 Let’s not pretend that we didn’t see this infamous pervert making the list. Jared Fogle, the onetime sole spokesman for Subway and a sex-crazed 38-year-old whose true appetite was not footlong subs but minors. Following a raid at his home in 2015, the FBI recovered around 400 child pornography videos that included children as young as 6. Following a lengthy interrogation, Fogle admitted to traveling across state lines to pay minors for sex. In addition, he would often pay underage prostitutes to find kids for him. Before his sentencing, Fogle stated to the court that “he will learn from his recent experience and won’t commit these crimes again.” In the end, the former mascot of Subway was ordered to pay $1.4 million in total restitution to 14 victims and sentenced to 15 years in prison.[10]

10 Gangnam Style Parodies You Have to See