Birds do more than fly and tweet. Their family life includes love triangles and dropping the kids off at a creche. Their stories also show how one island loved a duck and what happens when the world’s deadliest bird is kept as a pet.

These feathered creatures stun onlookers with daring survival situations. Meanwhile, scientists have fiery disagreements about trees stuck in nets and the killing of a bird sought for decades. 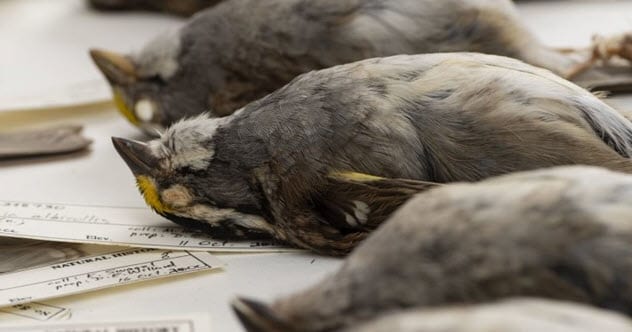 In 2019, a new study examined 70,000 “crash” specimens from Cleveland and Chicago (both located in a migratory bird lane). Most were songbirds that used nocturnal flight calls. The latter helps birds to navigate as a flock.

The study could not solve the mass deaths with certainty. However, it found a good clue in previous research: Birds called to each other three times less often in rural areas than they did in cities. It appeared that city lights disoriented the birds, prompting them to call more often to reconnect with the flock. This vicious circle lures other individuals toward the lights.[1] 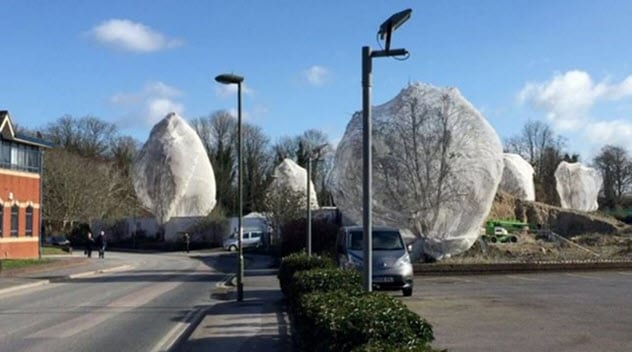 The United Kingdom lost over 40 million birds in the last 50 years. Conservation bodies know that nesting sites are important. In fact, it is illegal to remove an active nest.

During 2019’s spring—and bird breeding season—a fight erupted between bird lovers and housing developers. The latter avoid breaking the “active nest” law by putting up nets over trees and hedgerows earmarked for removal. This not only blocked nesting sites but there were also reports of birds getting stuck in the nets and ultimately dying.

Despite thousands of signatures pushing to make hedgerow netting illegal, the practice remains lawful. Developers have planted new trees, nine million in 2018 alone. But even conservationists who sympathize with the pressures that builders face say that developers can at least check their nets regularly for trapped birds. Apparently, this is not the case.[2] 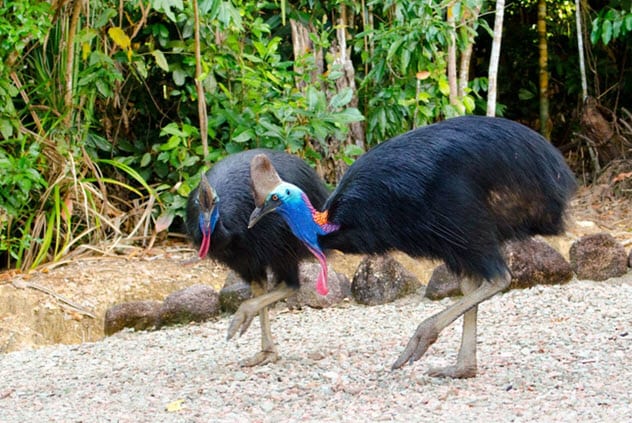 The world’s most dangerous bird is the cassowary. At first glance, it seems a bit harmless, just a large flightless bird with a bright neck. But this Australia and New Guinea native is so dangerous that experienced zookeepers avoid being alone with it. Cassowaries have been recorded kicking tourists off cliffs or cornering them up trees.

In 2019, a man in Florida was killed by his pet cassowary. The severe injuries that cost the 75-year-old his life were probably due to the bird’s middle toe. Each foot has three digits with formidable nails, but the middle one is practically a dagger. A kick can cause horrific damage.

The choice of pet had bird experts shaking their heads. Indeed, Florida’s Fish and Wildlife Commission views cassowaries as “Class II Wildlife,” which involves danger to people and a lot of permits.[3] 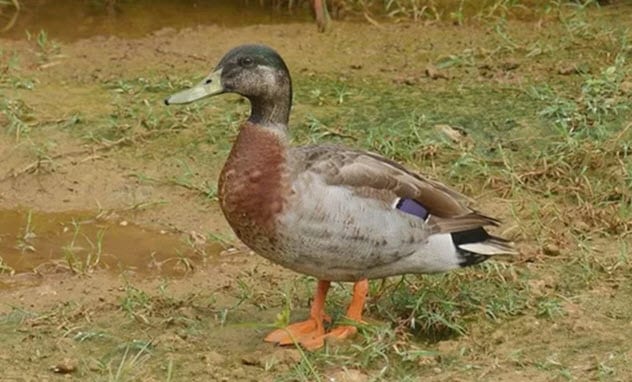 In 2018, the editor of a newspaper visited Niue island. The latter is 2,400 kilometers (1,500 mi) from New Zealand and has a population of 1,600. To his surprise, he found a duck—something not native to the island. An article gave “Trevor” a brief spell of fame as Niue’s only duck. Some dubbed him “the world’s loneliest duck.”

The mallard appeared after a storm, which likely separated Trevor from his flock. However he arrived, the bird chose to stay. He became a local mascot and even a landmark. “Turn right after the duck” became legitimate advice to travelers.[4]

His home was a roadside puddle often topped up by the local fire department. The islanders also took turns feeding the wayward bird. Trevor was not that lonely. He made friends with chickens and other birds. Sadly, in January 2019, the mallard was attacked and killed by a dog. 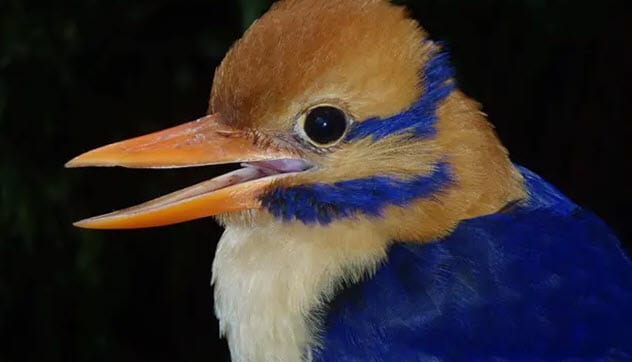 The mustached kingfisher is a feathery holy grail. The entire history of this rare bird is hinged on three dead female specimens. In 2015, Christopher Filardi from the American Museum of Natural History found a male. Discovered in the Solomon Islands, the gorgeous creature had a vibrant blue back and orange mask.

After photographing the history-making kingfisher, Filardi killed it. This caused a furor. Other biologists did not care for Filardi’s claims that he had assessed the local population’s numbers before killing the kingfisher. Many scientists feel that conservation research need not be so bloody, especially concerning a species with poorly documented behaviors.

The debate is not new.

For over a century, experts have been starkly divided over whether the fatal collection of specimens is necessary. The kingfisher incident received more coverage than most “scientific killings” due to its status as the first male seen by science. But the great auk, for example, was driven to extinction when researchers desired the rare penguin-like birds and paid hunters handsomely to harvest them.[5] 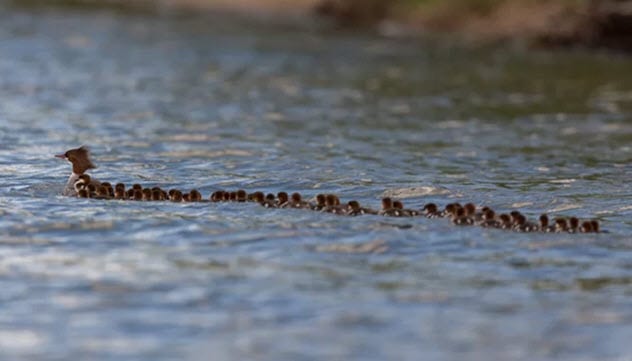 Minnesota presented a feathery mystery in 2018. A photographer snapped a duck at Lake Bemidji, and remarkably, she had 76 ducklings. The mother was dubbed Mama Merganser. (The large family belonged to the species Mergus merganser.)

In the past, extreme limits saw up to 30 ducklings snake after a single female. A mother duck, however, can only incubate around 20. Mama Merganser would have failed spectacularly had she tried to sit on 76 eggs.

Nesting ducks often collect more eggs than they naturally produce. Mothers walk between nests and deposit eggs everywhere. For this reason, a female often incubates her own eggs and a few adopted ones. It is more likely that Mama ran a so-called creche. This happens when younger females abandon their newborn ducklings with a more experienced mother.

Even so, the size of the Minnesota creche is outstanding. Nobody really knows which ducklings are Mama Merganser’s own, how many females laid eggs in her nest, or how many were given to her as newborns.[6] 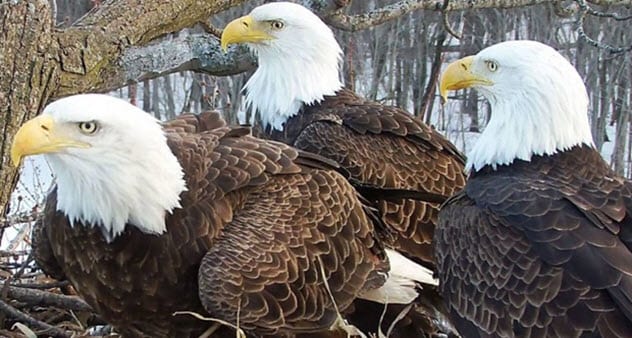 In recent years, researchers documented only the fourth time when three adult eagles decided to nest together. It started around 2016 when a male-female pair raised chicks in the Upper Mississippi River Refuge.

The male, Valor I, was a deadbeat dad and mate. The female, Hope, had to incubate, hunt, and raise the chicks—duties that eagle parents normally share. This was perhaps the reason why she did not object when a second male, Valor II, courted her. After the new guy moved in, Valor I stepped up and all three adults shared the duties.[7]

In 2017, Hope was lost when two other males attacked the nest. Valor I and II continued to raise the chicks by themselves. After the kids grew up and left, the dads stayed together and even courted a new female together. Called Starr, she became their mate that fall, and the trio hatched three eaglets. They have been together ever since.

In March 2019, an online video caused anguish among bird lovers. The footage showed a bird drifting toward a massive whirlpool before being sucked in. The nature of the vortex suggested that the creature came to a bad end. The 61-meter-deep (200 ft) funnel was actually a drain. It ran 18 stories down to a creek below the reservoir serving Lake Berryessa in California.

When the lake swells too much, water is drained down the tunnel (which happened that day). The man who shot the footage was the lake’s water resources manager, Rick Fowler. He was merely taking a video of the vortex when the bird unexpectedly floated into view.

The frightening speed that pulled it down the drain combined with the force of the water caused many online commentators to declare the duck dead. However, Fowler said the bird survived—for the very reason that it was not a duck. It was a cormorant, a waterfowl known for waterproof feathers and the ability to dive deeply into the ocean.[8]

Fowler said that the cormorant came out the other end a bit dazed but then flew up to a safe spot near the creek. 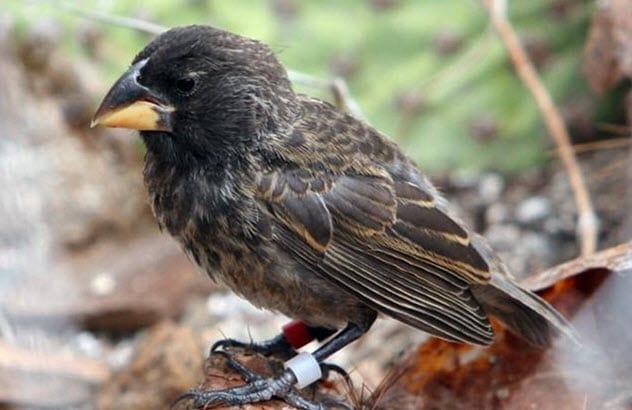 Daphne Major is an island in the Galapagos. During a visit, researchers noticed a large cactus finch. While known around the Galapagos, the species was not native to Daphne Major.

The male—the first cactus finch to jump to Daphne—was bigger and had a different song than local species. The newcomer’s tryst with two females, both called medium ground finches, produced hybrid offspring.

Unlike most hybrids, the chicks had no fertility problems. However, they were isolated by the local finches because their mating song—unlike their father’s—was not recognized. The hybrids could only mate with each other. Their inbred status grew when only two survived the 2002–03 drought. The brother-sister pair had 26 chicks, of which nine survived.[9]

By 2012, there were eight breeding pairs, and in 2017, they were officially declared a new species. The original male’s legacy was priceless. It allowed scientists to watch an entire species evolve in just two generations. In evolutionary terms, that was lightning quick. 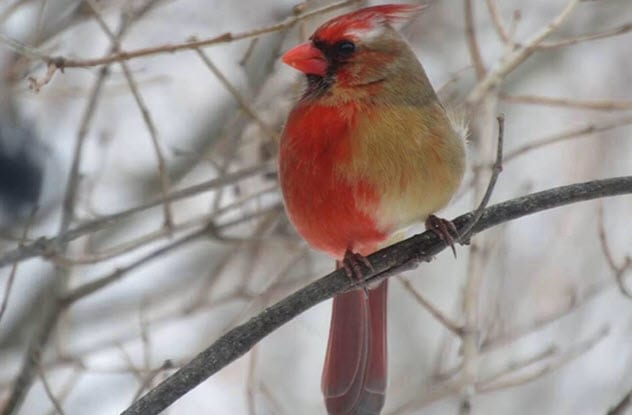 In 2019, Shirley Caldwell from Pennsylvania photographed a cardinal. Although males are red, the females have tan bodies. This one was split down the middle: The right side was red, and the left was tan. The bird was half male, half female.

Experts call such animals bilateral gynandromorphs (aka “half-siders”). These two-toned wonders also show up in butterfly and crustacean species. This cardinal probably split due to a chromosomal mix-up early in its development.

It is believed that half-siders are formed when an egg cell contains two nuclei instead of one. Each develops as a different gender and results in a perfectly halved chick.

The cardinal probably cannot sing, which is something only the males can do. However, it might raise a family as a female. As its left side is female, fertile eggs could happen. This is because only the left ovary in birds actually works. Indeed, the photographer noticed that a male cardinal courted the half-sider as if it were fully female.[10]