The following locales are globally renowned, and it’s easy to see why. Rich with history, mystery, and natural beauty, they’ve captivated humanity for hundreds (or thousands) of years. In addition to lore and magnificence, they tantalize us with hidden stories that illuminate the murky past. 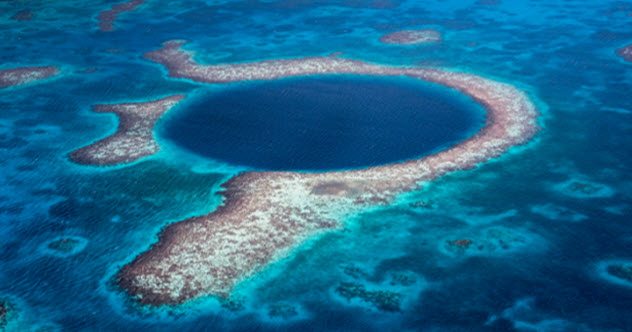 Scientific storm records only go back about a century. But nature keeps its own, longer-lasting records, locked in rocks and dirt.

Some of these are stored at the bottom of Belize’s famous Blue Hole. It, and similar aquatic sinkholes, trap sediment which floats down and settles in layers. And when storms hit, the sediments become more coarsely strewn.

Scientists stabbed into the Blue Hole’s heart and removed a 28-foot-long core that displays nearly 2,000 years of geo-history. It reveals that storm activity intensified around 900 AD, around the time of the Maya demise.

With the Maya already burdened by drought in the late 800s, these ferocious cyclones may have forced another nail in their collective, cultural coffin.

9 The Alhambra is full of secret messages 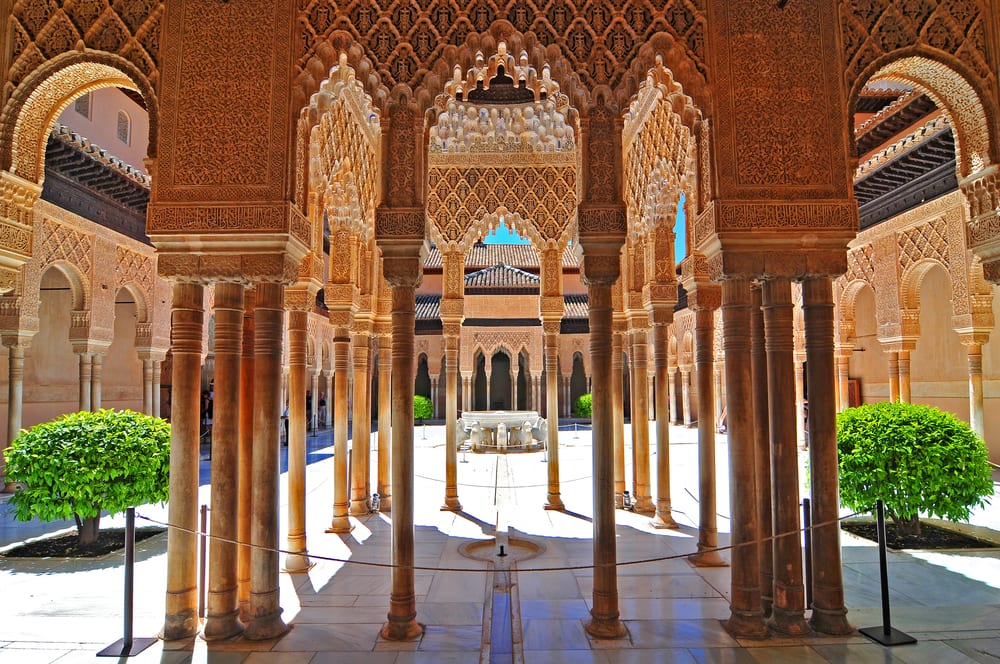 The Alhambra, in Granada, is the quintessential Spanish monument: it was built on top of Roman ruins in 889, rebuilt by the conquering Moors, then reclaimed by Spain in 1492.

Its many columns, geometric ornaments, and fountains are supreme works of art. But hidden throughout the fortress are 10,000 Arabic inscriptions. About 10 percent of these are verses from the Quran. The others are slogans, attributions, poems, and bits of life advice, like “Be sparing with words and you will go in peace.”

The most common motif is praise for the Nasrid dynasty. The final Muslim dynasty to rule the Iberian, the Nasrids enjoyed more than 260 years in power. And their motto, “There is no victor but Allah,” is the most common inscription in the palace.

After the Christian reconquest of Granada, power-couple rulers Ferdinand and Isabella realized the Alhambra’s beauty and chose to preserve the inscriptions. How refreshing to hear of monarchs that appreciated, rather than obliterated, a rival culture’s art. 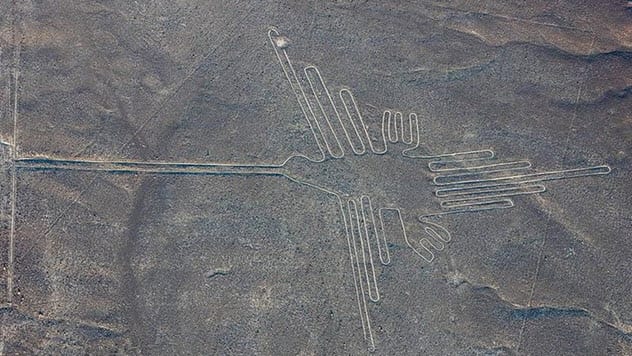 Peru’s Nazca Lines succeeded an art form that began more than 1,000 years earlier. Recent drone surveys revealed hundreds of ancient geoglyphs in the hills of Palpa, about 30 miles north of the Nazca site.

Made between 500 BC and 200 AD, they highlight the evolving art and ideology of the Topará and Paracas people. Unlike the more famous Nazca Lines etched on the 150-square-mile Nazca plateau, these older glyphs are set into the slope of a hill and would have been visible from the populated valley below.

So while the Nazca Lines may have been aimed at the gods, their predecessors were designed for human eyes, possibly to mark territories.

The images are psychedelic. Among them is an 80-by-210-foot depiction of a sacred deity with the body of a killer whale and a human arm, which holds a trophy head. Another glyph depicts a warrior with a headdress and staff-like implement, standing beside a woman. Between them is a Medusa-like being made of tangled tentacles or snakes. The scene supposedly symbolizes fertility. Go figure. 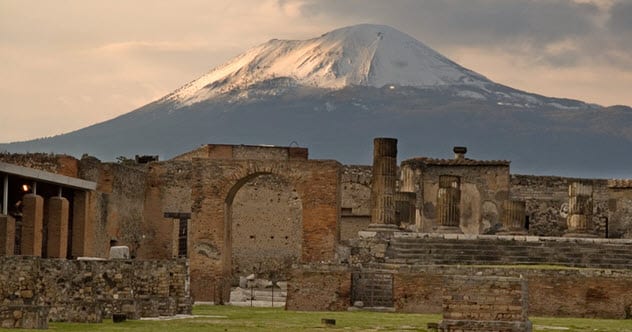 Two thousand years after its heyday, Pompeii continues to amaze the world with a flood of discoveries. Among the latest, courtesy of the Great Pompeii Project, is a fresco that combines all the beauty and brutality expected from the Romans.

The fresco is 3-by-4.5-feet and located near a gladiators’ barrack. It once adorned a basement wall in a tavern or public house, where gladiators gathered to knock back brews and perhaps sling smack-talk. In the rooms above, prostitutes practiced the world’s oldest trade and helped keep the gladiators, uh, fighting fit.

The fresco is renowned for its goriness. It depicts a murmillo gladiator (wielding a gladius and large rectangular shield) defeating a Thracian gladiator. The beaten “Thraex” gushes blood from multiple, well-detailed wounds as he holds up his finger, pleading for mercy.

6 The Serengeti is seeded with poo 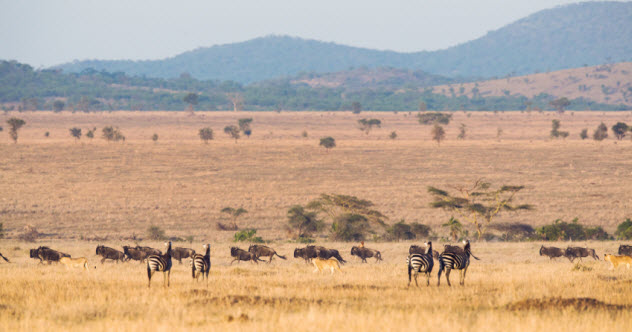 The Serengeti isn’t as untouched as it appears: nomadic Stone Age herders altered the savannah with their poo. Not their personal poo, but that of their grazing animals.

This inadvertent fertilization led to widespread greening and improved biodiversity. And it’s still visible today in oases called grassy glades. These verdant patches were thought to be around 1,000-years-old, but analysis of the dung-rich earth revealed they’d been laid down between 1550 and 3700 years ago.

Compared to the more barren patches surrounding the grassy glades, the oases were 10 to 10,000 times more fertile, thanks to the fecal enrichment that provided nutrients like magnesium, calcium, and phosphorus.

But the au naturel fertilization process is a double-edged sword. Only herders that are constantly on the move benefit the ecosystem. If they stay in one spot for too long, their animals overfeed and deplete the soil.

5 The Parthenon may have the wrong name 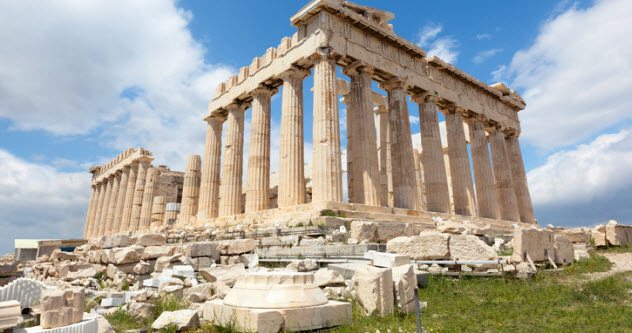 Built around 430 BC and dedicated to Athen’s patron goddess, Athena, the Parthenon is one of the world’s most famous buildings. But we might be calling it by the wrong name.

Parthenon means “house of virgins,” but there’s no real consensus as to why this particular structure earned this particular moniker. According to ancient texts and historical sources, the Greeks may have called their monument Hekatompedon, or “hundred-foot temple.”

This term appears in 2,500-year-old inventories. It’s described as the storehouse or treasury for all the golden objects made for Athena, including a 33-foot-tall gold statue. The name Parthenon is also mentioned, but it seems to refer to a separate, smaller treasury sitting within the Acropolis complex.

It’s argued that this smaller treasury, which held spoils of war, furniture, and other non-golden goods, could be the true Parthenon. Especially since it’s held up by caryatids, pillars in the form of women (virgins), fittingly supplying the name “house of virgins.” 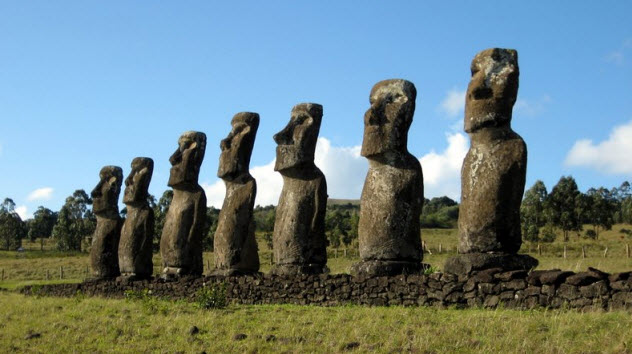 Rapa Nui seemingly holds the remnants of mass warfare. The island is littered with thousands of (what seem to be) obsidian spearpoints, called mata’a.

But even though the mata’a are sharp and pokey, their creators may not have used them to erase each other from history. So says the scientific art of morphometry, which compares the size and shape of the obsidian tools.

The scientists concluded that the mata’a don’t resemble the morphology of actual weapons found on the island. Their forms vary greatly and, more importantly, aren’t all that conducive for flesh-jabbing. Instead, they resemble multi-purpose tools, which explains their prevalence.

The Rapa Nui used them for various tasks, like tattooing or preparing plants. What they didn’t use them for, was stabbing. So maybe their decline wasn’t caused by catastrophic infighting, but (huge surprise) the European visitors who began arriving in the 18th century. 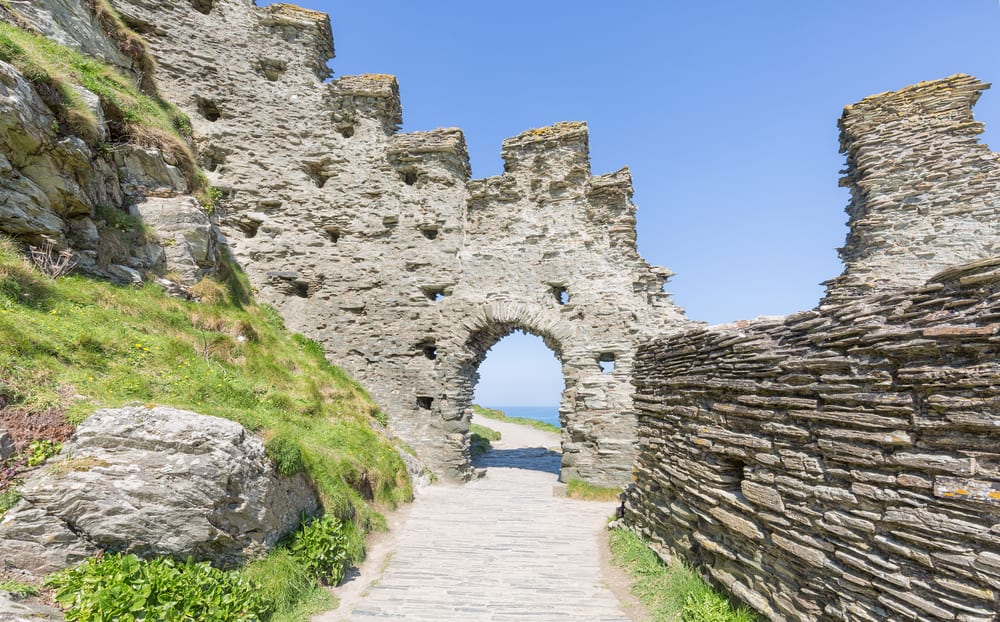 The unlikely evidence is a 2-foot-long slab of Cornish slate, which served as a window ledge in some now-ruined building, more than a thousand years ago. It’s like a miniature medieval Rosetta Stone, featuring Christian symbols and Greek and Latin writing. And its multilingual nature implies a learned, metropolitan population.

Researchers say the stone immortalizes an old scribe’s writing practice. And this 7th-century man-of-words was no scrub; he knew how to write official documents and also those flashy, illustrated gospels with the fancy letters.

This discovery (along with previously found foreign goods) suggests a vibrant heritage. The site hosted a literate people, boasted Mediterranean trading connections, and may have even seated Cornish kings.

2 Stonehenge may have been built with pig fat 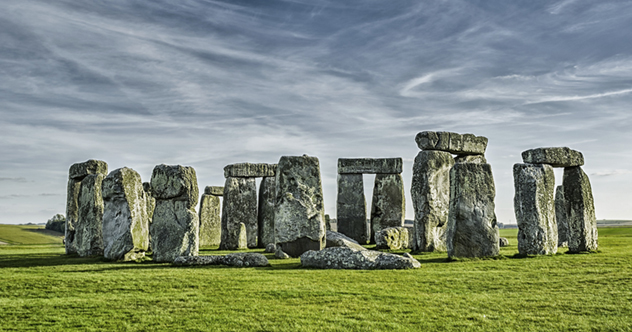 Stonehenge’s megaliths weigh 30 tons and came from 18 miles away. The smaller bluestones weigh between 2 and 5 tons and traveled nearly 90 miles from the Preseli Hills in Wales. Possibly with help from an unexpected ally: pigs.

Pigs’ fat, actually, according to ceramic pots found two miles away at Durrington Walls, the millennia-old village that may have housed Stonehenge’s builders.

The aged pots were smeared with pork fat, and it probably wasn’t for culinary reasons. If the pigs were indeed cooked in these bucket-sized vessels, they would have been chopped up. But archaeologists discovered the ancient carcasses mostly intact and displaying the type of burn marks that suggest a spit-roasting method.

So the monument-builders may have collected the lard to grease logs, upon which they rolled the sleds that conveyed Stonehenge’s enormous megaliths.

1 The Great Wall of China had multiple purposes 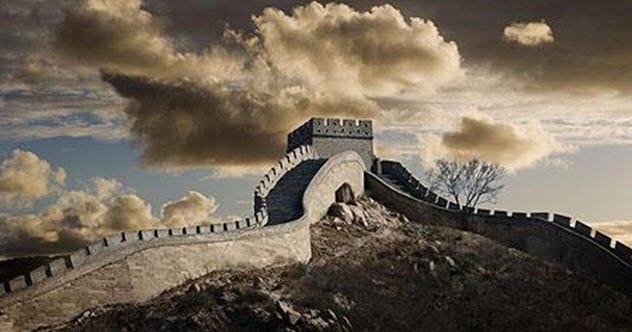 First, the wall is too low. At only 6-feet-tall, with a 6-foot-deep ditch, it’s not unscalable enough to impede a marching, blood-thirsty army. Second, it isn’t built of sturdy bricks, like other portions of the wall, but of packed earth.

Plus, it’s built around footpaths. And accompanied by 72 clusters that probably housed administrative buildings. These unfortified structures are placed next to entrances and exits at the head of well-traveled paths.

Why? To manage mass movements of people and livestock. The wall allowed the Khitan-Liao Empire to control migration, impose taxes, and grow fat.