In the last 10 years, developments in DNA analysis have completely revolutionized how we see the human past. Working with archaeologists, anthropologists, and language experts, we’ve discovered some mind-blowing stuff just in the last few years that have changed how we see our species. 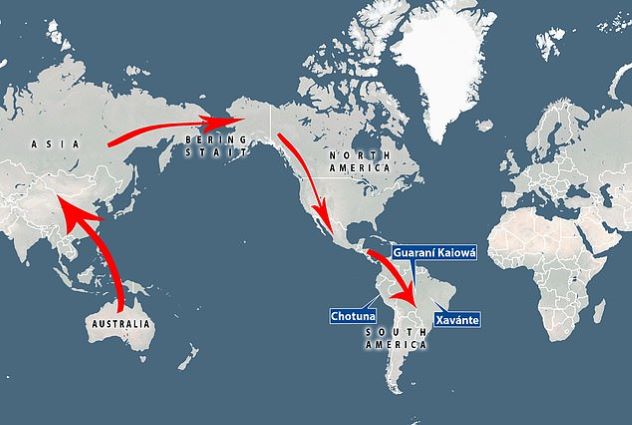 Before we started analyzing ancient DNA, we used to think that early human migrations were way simpler. But discoveries in the last few years have shown just how wrong we were. We’re still learning how and when people first arrived in the Americas. In 2021, archaeologists in New Mexico found human footprints dating to 21,000–23,000 years ago, pushing back the date for the colonization of the Americas by thousands of years!

Analysis of the DNA from native Australians has already shown that a group, referred to as the Y population, shares some common ancestry with native people living in the Amazon today—but not Northern or Central America. A study published in 2021 uses one of the largest databases of South American DNA to work on this problem. They discovered that the ancestors of South Americans and Australians met and had children somewhere in East Asia before some of their descendants entered the Americas and traveled to the Amazon along the Pacific coastline. This would mean that humans entered the Americas from Asia at least twice.[1]

What the researchers learned backs up historical records and reinforces what we know about the brutality of the slave trade. For example, people from what is now Senegal and Gambia were prayed upon by slave traders for centuries. But their descendants are massively under-represented in the USA today. This is probably due to the high mortality rates experienced in plantations. The study also shows geographical differences in how Africans mixed and married with other people. African descendants from Latin America, where enslaved Africans often had children with native people, tend to have fewer African descendants than people in North America, where there was more segregation.[2]

8 Neanderthal DNA Migrated Back to Africa

We’re all familiar with the out-of-Africa theory: the idea that most non-Africans today are descended from a small group of people that left the continent around 60,000–70,000 years ago. Along the way, those humans met other human groups like Neanderthals and Denisovans and had some babies.

Because all this mixing happened outside of Africa, previous studies assumed that Africans had no Neanderthal ancestry. Some geneticists even treat African DNA as a control sample when measuring how much Neanderthal or Denisovan ancestry other populations may have. But this study suggests that people also migrated back into Africa, bringing with them the Neanderthal genes and spreading them into the African gene pool through a process called gene flow.

As a result, the study suggests that we may have over-estimated the diversity of Neanderthal ancestry in non-African populations, basically meaning that all humans may have more or less the same amount of Neanderthal DNA. This study complements archaeological work around the Arabian peninsula published in 2021 that has shown just how many people would have moved across this region and back and forth between the Middle East and Africa, spreading genes and culture as they went.[3]

The British Neolithic period is known for its large megaliths, cairns, and other stone structures, often featuring many people buried together. Until now, it has been unclear what relationship, if any, the human remains in a monument might have with each other. Now we know that they were probably family tombs. A study using data from 35 people buried together in a long cairn in Hazleton, UK, showed that they were five generations of a single extended family. Scientists have used the relationships between these individuals to recreate the world’s oldest family tree.

The reconstructed family tree shows a direct biological relationship between male members. One male skeleton appeared to be the father, grandfather, or great-grandfather of almost everyone else in the tomb. His children and grandchildren by two different women were buried with him. The two women and their children were actually buried in separate areas of the tomb, suggesting that the difference in lineages was recognized even after several generations.

Many of the female skeletons appeared to be from elsewhere and may have joined the family through marriage, coming to live with their male partners. This suggests that early Neolithic farmers practiced what we call female exomany, a system where women move in with their partners and where family identity is inherited from the father. This is much like how we often take on our father’s surname in the modern world. The burial also included several people who had no biological relationship with the rest of the family, leading researchers to suggest that people could become family through different kinds of connections, such as adopting step-children.[4]

This study combines genetics with linguistics. The spread of language families across the globe is another area of study that works with archaeology and history, often with confusing and contradictory results.

The Transeurasian language family covers the whole Asian continent and includes Japanese, Mongolian, and Turkish. The spread of languages over such a large area has been hotly contested by scholars who cannot agree whether the language was spread by farmers, pastoralists, or Bronze Age migrations.

Scientists used ancient DNA, language study, and archaeological remains to find a solution. The study concluded that the homeland of the Transeurasian language family can be traced back to early millet farmers in northeast Asia. It then spread out in two phases. The first phase involved the gradual expansion of millet farmers into new territory, bringing their language with them. Transeurasian people then split into five “daughter groups” after the late Neolithic and intermingled with other Eurasian peoples, exchanging partners and linguistic terms and learning new subsistence techniques like wheat farming.[5]

5 Understanding How Polynesia Was Settled

Like the Americas, the way that humans settled Polynesia is a controversial subject. Remember that this is an island region that spreads across the biggest ocean in the world, and people were moving from place to place in open canoes. For a long time, scientists couldn’t agree on whether Polynesia was settled by South Americans or Australasians, or both!

This study used the genomes of 430 modern people from 21 islands. They found that the settlement of Polynesia started around the 11th century from Samoa, where people spread eastward, perhaps colonizing islands that had only existed for a few hundred years. They finally arrived at Easter Island around the year 1200. They would have made the trip in small groups, less than 200 people at a time, navigating using the stars and leaving behind them the huge statues that Easter Island is famous for today.[6]

4 The Most Denisovan DNA Goes To…

Denisovan DNA In The Philippines

Reading this list, you can see how ancient DNA has shown us how complex and full of surprises ancient human migrations were. The Denisovans were first discovered in a cave in Siberia back in 2010. When their genome was compared with people alive today, we found out they share the most common ancestry with people living in modern Southeast Asia!

This study builds on previous work and concludes that a native group called the Ayta Magbukon, who live in what is now the Northern Philippines has the most Denisovan DNA, up to 5% of their genome! The scientists conclude that Denisovans must have been present in the islands of Southeast Asia at least 50,000 years ago.

The Philippines are beginning to get a lot of attention. In 2019 researchers also announced the discovery of a new species of small hominid, Homo luzonensis, that lived in the north of the islands around 60,000 years ago. It now looks like the Philippines and the rest of Southeast Asia were busy places back in the day, with lots of different types of humans living in the same area and meeting each other.[7]

You thought coronavirus was new? Ancient viruses can leave a mark on our DNA that can be analyzed by researchers. The scientists in this study found that humans have been dealing with variants of the coronavirus since the Stone Age! They also support previous research that suggests that intermixing with Neanderthals made Europeans more vulnerable to the coronavirus.

The earliest corona epidemic emerged in East Asia around 20,000 years or 900 human generations ago. It lasted several generations, long enough to create what scientists call a “selective pressure” on humans. The first strain was probably more dangerous than the modern Covid-19 variant, becoming less deadly over time. Although the researchers note that it doesn’t appear to have made modern East Asians any more or less vulnerable to the virus, evolutionary medicine, as this field is called, may still be useful in helping us find cures or fight future outbreaks.[8]

Earliest modern humans in Europe were in Bacho Kiro 45,000 years ago

As you’ve probably realized by now, ancient DNA has thrown up a few surprises as we discover how complicated human movements actually are. It can also give some real darn confusing results. For example, two recent papers analyzed the genome of people living in Bacho Kiro cave in Bulgaria around 45,000–42,000 years ago. These skeletons are also the oldest Homo sapiens remains in Europe.

Researchers found that these people had Neanderthal ancestors “just a few generations back,” suggesting that hooking up with our Neanderthal neighbors was probably pretty common. Scientists then compared the Bacho Kiro genomes with people alive today to see what modern populations they might be related to. Surprisingly, they found out that they were the ancestors of Native Americans and East Asians. The paper also found that human remains from the same site but dating to a later part of the Paleolithic were more closely related to modern Europeans, showing that populations were always mixing and moving.[1]

Although it doesn’t tell us anything new about the human past per se, we just couldn’t help including this delightful bit of news about how human DNA might be analyzed in the future, Jurassic Park style. Apparently, human DNA can be preserved in the cement that head-lice use to glue their eggs to our hair! The scientists behind this technique sampled the hair from Argentinian mummies that died 1,500—2,000 years ago. Can you imagine going through an ancient mummy’s hair with a nit-comb?

As well as being revolutionary (and maybe just a little bit gross), this technique may be a more sustainable way of extracting ancient human DNA. Current techniques which extract DNA from bones or teeth actually destroy the original sample. So obviously, many archaeologists are reluctant to conduct DNA analysis on their rarer specimens. This technique could also represent a way of sampling DNA from countries that might be reluctant to allow Western scientists to export human remains.[10]