The Big Apple has got some pretty big spaces. From the many theatres of Broadway to the stunning lobbies of the grand hotels, world-famous galleries and museums, and the green expanse of Central Park, New York City ranks among the most iconic cities the world has ever seen. But, as with the other great cities in this little series, there are a wealth of hidden spaces waiting for you to uncover.

And do it quickly because New York is not doing so well right now—don’t all move to Austin, Texas, just yet! As this list will show, there are plenty of places to see. 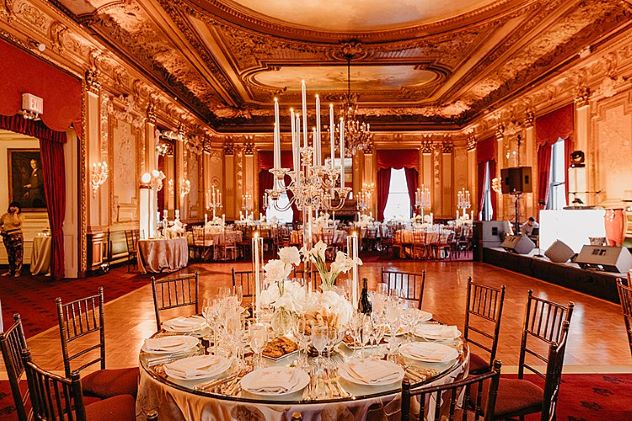 New York, alongside the world’s other great cities, has a strong game when it comes to old-timey, elegant, exclusive members’ clubs. But this one seems a touch more opulent than the others. When you look at the founding members—financier JP Morgan, railroad tycoon Cornelius Vanderbilt, steel magnate James M Waterbury, former Assistant Secretary of State John L Cadwalader, and James A Roosevelt—it is little wonder how this place became so fancy.

Founded in 1891, the place retains its Gilded Age splendor. The West Lounge, found on the club’s first floor (of six), is the stand-out space. The stunning Renaissance murals look down upon the ornately decorated marble fireplaces, rendering the impressive views over the iconic Central Park rather dull—why would you look out when this is what is inside? So if you fancy gathering your pals for a knees-up, imagining yourselves all captains of industry and masters of the new world, the spaces throughout are available for hire. I’m sure they’ll take your house as collateral against the down payment…yeah, maybe just blag your way in for a quick peek. [1]

Parks are a fascinating human invention. More so than any ancient druid pointing to the boughs of an oak tree (where he just hung up a bunch of entrails) to demand reverence for nature, the modern park is the ultimate reverential symbol we’ve made for nature. We, those shaved apes that send people into space and create intricate systems that govern all aspects of our life, carve out portions of cities and towns and recreate the natural world. We need this. But not all parks are created equally, and some smaller parks are relatively ignored, remaining in the shadow of their bigger, flashier, more historic brethren.

One such “hidden” gem is Greenacre Park. With its 7.6-meter (25-foot) granite-constructed waterfall at its heart, this park is comprised of three levels, allowing for a multi-tiered experience. And what a pleasant experience it is! The waterfall births a babbling brook that leads to the entrance of the park. Next to the waterfall is a seating area, the perfect place to sit back, read a book, and forget that New York is dying.[2]

Many public spaces in Lower Manhattan’s skyscrapers have been off-limits to the general public in the wake of the 9/11 terrorist attacks in 2001. However, the Ford Foundation Building’s atrium has not closed. Since 1963, the tiered garden space has offered an awe-inspiring haven for people to escape the hustle and bustle of Gotham’s busiest area. If Greenacre Park provides an outdoor getaway for New Yorkers, the Ford Foundation Building’s atrium is the indoor equivalent.

The garden was designed by landscape architect Dan Kiley and, since a 2018 redesign, has retained the peaceful aura the original vision created. The mid-century buildings and spaces in America’s main city really are a departure from earlier designs. Gone were the days of the celebration of progress and glory, of industrial mastery and financial victories; here came a time of escape, a move toward a more socially-conscious and sustainable future—progress at a more neck-preserving pace than the break-neck past. The Ford Foundation Building makes a great argument for this form of beauty far better than the contemporaneous monstrosities elsewhere in the city.[3]

There is something creepy about abandoned subway stations. Not this one, however. This one is cool as hell—it answers the age-old question of “why did people in the past wear such fancy clothes when out and about?” Beautiful, mirror-shine green and white glass tiles line the gorgeous Gustavino vaulted ceilings, allowing the gentle light from the many chandeliers to dance around this subterranean space. Given that this was a busy commuter hub at the beginning of the twentieth century, one wonders how many people stopped to appreciate this stunning space when it was in regular use as a station. Not many, probably.

The City Hall station is an absolute gem. That is probably why the New York Transit Museum charges $50 for a tour of the place (and you have to be a member of the museum to attend, which is an additional $60). But if you’re a “meh, I don’t mind a fleeting glimpse” sort of person, why not just hop on the 6 train? It’ll pass through the station on its loop, allowing passengers to take a quick (and deeply envious) look at the sort of environment people used to stand in and wait to get moved around the city.[4]

Some have claimed the USA is the modern equivalent of the Roman Empire. So, there should be no surprise that this 19th-century University library in the Bronx was a reinterpretation of Rome’s Parthenon—and a hell of a good one, at that! Now a part of Bronx Community College, this space is well worth a look. A long look.

Built between 1894 and 1895 by the city’s foremost architect, Stanford White, as part of the University of New York City’s (now NYU) expansion onto the recently acquired Mali Estate, the whole complex is a monument to academia. The main reading room is breathtaking. From the sixteen imported Connemara marble columns, one’s eye is drawn upwards to the 21-meter-wide (70-foot) stucco-covered dome gilded with Dutch metal. It is meant to help inspire students to lofty academic heights, driven home with a wonderful quote from Milton’s Paradise Lost adorning the large entablature: “And chiefly thou o spirit that dost prefer before all temples that upright heart and pure. Instruct me for thou knowest what in me is dark. Illumine what is low raise and support.” Indeed.[5]

Beyond the melty clocks and vaguely smiling ladies, the out-of-place anatomical features, and the formaldehyde-bathed sharks, the visual arts have often been explicitly celebratory of mankind’s achievements, not merely impressionistic, expressionistic, devotional, or outright weird. We tend not to see this heroic style as often today, save on a very localized scale in school murals or public art commissioned by small community groups. If you get to visit the AT&T Long Distance Building in Manhattan’s Tribeca district, you’ll certainly get a sense of this once powerful artistic trend.

The art deco stylings within and without the building are amazing. However, there are plenty of far more famous buildings in New York that can show off their exterior deco cred. It is the incredible murals that run through the building that elevate this space to a must-see for art lovers.[6] 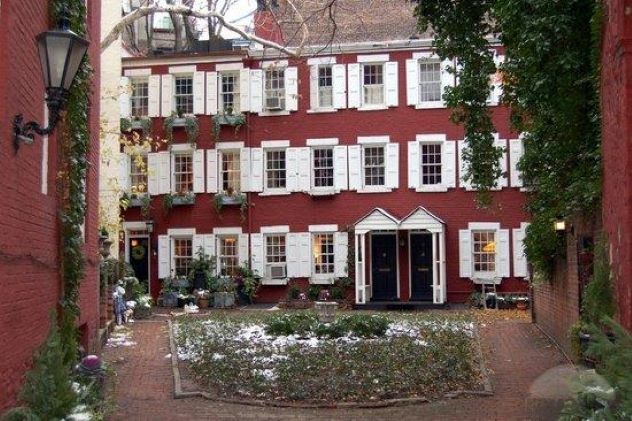 Some of you may balk at the idea of a gated community—it smacks of elitism as well as producing more than a whiff of “stay the hell away from me.” But once you manage to take a sneaky peek of Grove Court (alongside the many other tourists found doing the same thing), you’ll begin to dream of living there yourself. A square of brick-red townhouses, all in a charming Federal-era design, is a far cry from the austere brownstone, stooped buildings found elsewhere in the West Village.

This hidden architectural gem was built in 1854 by a grocer named Samuel Cocks (oh, stop sniggering and grow up!) to house laborers and local traders. So, not a fancy hideaway for the wealthy at all. Well, that’s what it is now, of course. The last time a 2-bed, 2-bath townhouse went up for sale, it fetched a cool $3.5 million.[7]

3 The Tunnels Under Columbia University

One of the worst-kept “secrets” in New York is the network of tunnels found under Columbia University. Despite the wide-ranging knowledge of these fascinating subterranean passageways, they don’t draw in masses of urban explorers that you might expect.

We often forget that the world around us, all the boons we take for granted, are manufactured, maintained, and require spaces such as these. The tunnels are Columbia University’s circulatory system. But before their role in keeping the uni humming, the tunnels served a far more sinister institution—The Bloomingdale Insane Asylum. The tunnels also played host to scientists working on the Manhattan Project. So if you want to see the place where scientists, madmen, and some mad scientists used to scurry around, take a trip under Columbia—it’ll be more interesting than attending a lecture.[8]

2 Beneath the Brooklyn Bridge…

Urban exploration has undergone a real image transformation in recent years. Much like action sports like skateboarding and BMXing, there is now a veneer of respectability and cool to this once derided, nuisance pursuit. Urban explorers are the Indiana Joneses of the cities, uncovering artifacts and spaces that our forebears once used. Perhaps this could be considered the crowning achievement of this subculture in New York; the uncovering of a disused nuclear bunker inside the Brooklyn Bridge!

Awesome…or it would have been were it not for the fact that it was actually uncovered by some construction workers doing some routine inspections on the bridge. Ah well, at least they can lay claim to the next entry.[9]

Behind-the-Scenes at the Explorers Club

The feeling one gets on entering a particularly beautiful or interesting space is driven by the styling. A highly baroque interior evokes a sense of opulence and a gentile lifestyle. An austere brutalist building suggests humanity’s progress to a utilitarian utopia/dystopia. Often, however, the styling is overridden by other elements. A baroque interior dotted with Lalique vases, Romantic landscape oil paintings, and bronze busts of various French monarchs will transport your mind’s eye to a Paris salon.

What we find in New York’s Explorers Club is not so much a transportation to a time and place but rather a whistle-stop journey around the globe’s wilder localities, evoking a sense of adventure, scientific discovery, and mankind’s emergent role as custodians of the natural world. Stuffed animals from all over the world are found everywhere—taxidermized cheetahs, lion pelts, rhino heads on walls, and great Elephant tusks flanking a fireplace in the reading room. Pith helmets may be required. Vegans need not apply…[10]