It’s always thrilling when archaeological discoveries are announced or ancient shipwrecks are found on the ocean floor. Over the past couple of decades, there have been amazing discoveries of sarcophagi, pyramids, temples, lost cities, rare fossils, and a whole lot more.

On this list are just a few of these types of fascinating finds that sent ripples of excitement around the world.

In 2018, archaeologists in South Africa announced that they had uncovered the remains of the country’s earliest metropolis, namely the ancient city of Kweneng. The city is situated around 50 kilometers (31 miles) south of Johannesburg and was believed to be lost to history. The settlement likely reached its peak somewhere between the 15th and 19th centuries.

The team of archaeologists used advanced laser technology to excavate the area and map out satellite images that revealed Kweneng may have housed up to 20,000 people. They believe that these people were of the Tswana culture known for having a court-based legal system, mediators, and harsh punishments for law violators. The discovery of this ancient site is of the utmost importance to the country, given the lack of written accounts about pre-colonial South Africa.[1]

Spanish Stonehenge | Dolmen of Guadalperal In The Valdecañas Reservoir

While the Dolmen of Guadalperal is a rediscovery, it is still an amazing find, especially for those who believed it to be an urban legend.

In 1963 the construction of a dam and reservoir in Cáceres, Spain, saw the megalithic monument dubbed the Spanish Stonehenge become flooded and then submerged. As the water levels fluctuated over the years, the top of the stone circle sometimes became visible above the surface.

In 2019, a severe drought season in the area caused the monument to fully reemerge to the astonishment of residents. The Dolmen is believed to be between 4,000 and 7,000 years old and consists of more than 100 upright granite stones. Archaeologists believe that it was likely a temple and burial site later plundered by the Romans.

At the time of the rediscovery, there was an active online petition to save the moment from further damage caused by the water with tourists eager to get close to it.[2]

8 Royal Tombs of Ur

Treasures from the Royal Tombs of Ur

The ancient city of Ur in Mesopotamia was the site of a 12-year expedition of which the Royal Cemetery excavations were undertaken by Charles Leonard Woolley between 1926 and 1932. Some of the artifact masterpieces uncovered by Woolley are on display at the Penn Museum. One of the most striking artifacts is the head of a lion made of silver, lapis lazuli, and shell. It is believed to have been attached to a chair at one point.

In one of the tombs, Woolley discovered Queen Puabi’s headdress, which contained gold, carnelian, beads, and wreaths. The headdress was found resting on the queen’s remains and is estimated to weigh around 2.75 kilograms (6 pounds).

Another fascinating artifact found at the Royal Cemetery is the statue Woolley named “Ram Caught in a Thicket.” It is believed that this object, which depicts a goat standing on its hind legs with its head in a rosette branch, might be connected to the story of Abraham in Genesis. The bible story has it that Abraham found a ram stuck in a thicket and proceeded to sacrifice it in the place of his own son.[3]

7 Ancient Crocodile and a Juvenile Dinosaur

Ancient fossils always make for a cool discovery. They shed light on hidden aspects of the dinosaur era and provide valuable insights into what life was like for these creatures millions of years ago.

In 2010, a group of scientists discovered and excavated the fossilized bones of a 93-million-year-old crocodile. In 2022, they performed advanced imaging on the fossils and found the remains of a juvenile dinosaur within the crocodile’s stomach contents. The crocodile was around 2.5 meters (8 feet) in length, while its partially digested dinosaur meal was the size of a chicken. The team studied filled-in worm tunnels and plant roots that extended between rock fragments and revealed that the chemistry of the rock provided evidence that the dinosaur was in the gut of the crocodile.

The crocodile’s remains were found in a huge boulder, which led scientists to believe that it had been caught up in a mega flood and died almost instantly.[4] 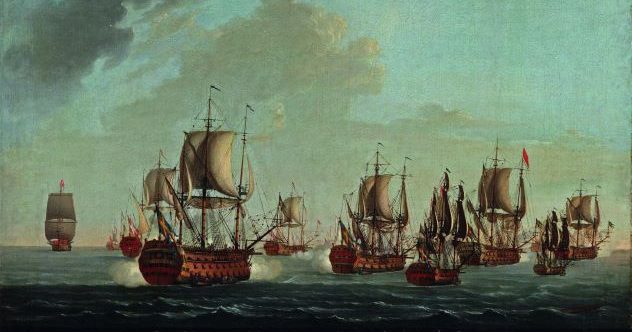 It has been estimated that more than three million shipwrecks lie scattered on the ocean floor. These include modern shipwrecks as well as the wrecks of canoes that provided a mode of transport 10,000 years ago. Many of the ships that have sunk below the sea’s surface played an important part in history, and finding the wreck often fills in blanks of what exactly may have occurred during the sinking.

The Danish warship, Delmenhorst, was sunk during a naval battle in 1644 after it was deliberately grounded near the city of Rødbyhavn’s to stay out of reach of the town’s cannon. The ship’s commanders were of the belief that the ship’s proximity to the cannon would protect it from destruction. However, the Swedes planned to throw a spanner in the works and did so successfully by setting one of their own ships on fire and sailing it into the Delmenhorst.

In 2020, marine archaeologists announced that they had located the wreck of the Delmenhorst in the Baltic Sea. The wreck had sunk 500 feet from Lolland’s southern shore. It produced a horde of artifacts, including the remains of bronze cannons, cannonballs, and coins. The Delmenhorst is known for being one of the first ships built using drawings.[5]

The ancient village of Karahan Tepe, which lies near the Turkish-Syrian border, has provided researchers with some evidence that society may have been established before the advent of agriculture.

Karahan Tepe is believed to be 11,400 years old, and during excavations, a vast ritualistic complex that includes houses has been uncovered. According to associate professor of prehistory Necmi Karul, the discovery has given researchers a different view on history, as it demonstrated that hunter-gatherers were building permanent settlements long before agriculture became popular around 10,000 years ago. Inside Karahan Tepe’s sacred and secular spaces, no remnants of agricultural activities were found.

Before this discovery, scientists believed that the domestication of animals and plants 10,000 years ago is what drove humans to build permanent settlements.[6]

In what is still called one of the best archaeological finds in the west, a row of ancient Indian settlements discovered on Range Creek Ranch continue to amaze researchers and archaeologists.

Range Creek belonged to Waldo Wilcox, and he famously spent 50 years keeping people off his land. The ranch lies deep in the Book Cliffs region in Utah, and Wilcox and his family simply tried to ignore the important ruins that dotted their land. Alongside the pit houses and human bones lay scattered arrowheads, ceramic shards, and the remains of stone tools. There is also rock art carved into the cliff walls. However, Wilcox ultimately did archaeologists a favor by keeping people away from Range Creek, as it meant that the site had been left undisturbed by curious visitors.

The federal and state government paid Wilcox around $2.5 million for the ranch and took ownership of it in 2004. Curators have called the site a national treasure, and scientists soon realized that the site was once home to the Fremont people. These hunters and farmers lived mostly in Utah between AD 200 to 1300 before disappearing. It is known that the Fremont people adopted farming and engaged in agricultural activities for 1,100 years before abruptly stopping. The research done on Range Creek was meant to uncover the reason for their abandonment of agriculture.

By 2010, 420 archaeological sites had been recorded on the ranch, with scientists believing there were many more to be found.[7]

In 2018, researchers announced the discovery of more than 7,000 stone tools during an excavation in Attirampakkam in 1999, which is an open-air Palaeolithic site northwest of Chennai in India.

These tools showed an upgrade in their shaping techniques, which included advanced blades, scrapers, and points, but some of them dated back as far as 385,000 years. This suggested that modern stone tools were being made in India at least 250,000 years earlier than previously believed. But the question remains: who made these tools?

Experts have produced a theory, saying that the tools may have been made by an archaic hominin species, as opposed to modern humans. However, it is not possible to determine this as fact. The tools are the oldest Middle Stone Age artifacts found in India to date.[8]

A Sea Dragon is discovered at Rutland Water

In February 2021, the UK’s largest and most complete skeleton of an ichthyosaur was discovered at Rutland Water.

Speaking about the discovery a year later, conservator Nigel Larkin explained that the area the skeleton was found in was a bird sanctuary, which meant a lot of bird poo had to be shoveled out of the way before they could get to the excavation site. The entire project was kept secret to ensure that trophy-hunters didn’t get wind of it.

Larkin also said that the bones were as fragile as a biscuit (that’s a cookie to you Americans), and the surrounding Jurassic clay had to be chipped away very carefully so as not to damage the fossil. A rear fin of the ichthyosaur faced the wrong way. Another ichthyosaur’s tooth was discovered nearby, leading experts to believe that the ichthyosaur they were excavating was scavenged.

The Rutland sea dragon has been named one of the greatest fossil finds in the UK and dates back 180 million years.[9]

In some truly remarkable news that made headlines in March 2022, Sir Ernest Shackleton’s lost vessel, the Endurance, has been discovered at the bottom of the Weddell Sea. This ship sank in 1915 after being crushed by sea ice, and the incident saw Shackleton and his men make an amazing escape in boats and on foot.

Footage of the Endurance shows it to be in remarkable shape, and the name is even clearly visible on the stern. Marine archaeologist, Mensun Bound, has said that the wreck was the finest wooden shipwreck he’d ever seen.

The ship was found at a depth of 3,008 meters (9,870 feet) after remotely operated subs from the South African icebreaker Agulhas II combed a predefined search area. It was found on March 5, 2022, which also happened to be the 100th anniversary of Shackleton’s funeral.

The team that discovered the ship has not salvaged any part of the wreck or its contents, as the ship is a protected historic site and monument under the Antarctic Treaty System.[10]