One of the most reviled and macabre professions within human history is that of the sin-eater from the Victorian era. With job responsibilities that included taking on the ultimate burden for the good of others in their community despite significant and lasting consequences to themselves, it is easy to understand why.

As part of a bizarre ritual that existed until roughly a century ago, families would hire the local sin-eater to come by and assume the sins of the recently deceased so they might enter heaven. Surprisingly enough, consuming the sins of the dead was not even the worst part of the job. Several other factors made this line of work even more unsettling than you might think, evidenced by these ten facts about sin-eaters that you probably shouldn’t read while eating.

Related: 10 Unusual Death Rituals From Around The World

10 They Were in Demand

Inviting Sin-Eaters to a Funeral: Fact or Folklore?

Sin has always been a focal point within the Christian faith, with the widely held belief that a person must be free of sin to be accepted into heaven. The only way to achieve this was through confession, a Catholic practice that involves confessing sins to a priest in return for God’s forgiveness. This idea is emphasized by Jesus in Luke 11:4 of the Bible: “And forgive us our sins, for we also forgive every one that is indebted to us.”

Unfortunately, death does not always allow for that last confession. Remaining sins at the time of death could potentially bar a person from heaven and trap them on Earth as a ghost or spirit or send them to Purgatory.

So England, Scotland, Wales, and the surrounding areas came up with a unique solution to save the dead from this horrifying fate. From the late 1600s to the earliest years of the 20th century, family members would employ a professional to rid their deceased loved ones of their sins. That hired hand was known as a sin-eater. It was typical for nearly every village to have one.[1] 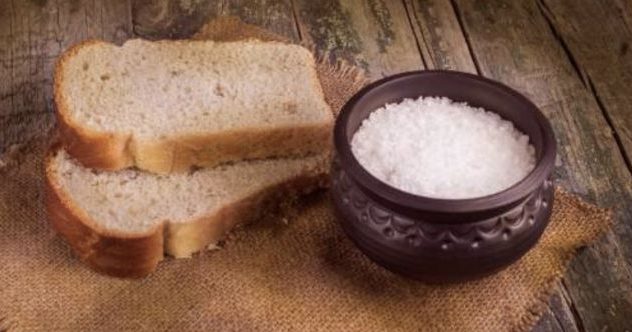 The ritual of sin-eating centered around a loaf of bread, salt, and intention. The family would place a loaf of bread and a small bowl of salt on the chest of the deceased and allow it to absorb their unconfessed sins. Or they would ritually wave the bread over the body to collect them. Then, they would slice the sin-infested loaf and serve it.

According to Professor Evans of Presbyterian College in Carmarthen, Wales, who is said to have witnessed the ritual in 1825, the family would promptly burn the bowl and plate after the sin-eater was finished with them. Once the sin-eater departed, the family members would stand on one side of the coffin and pass out pieces of “arvel” (or “arvil”) cake across the corpse to mourners. (This funerary snack had nothing to do with unconfessed sins, however).[2]

8 It Was a Simple Job 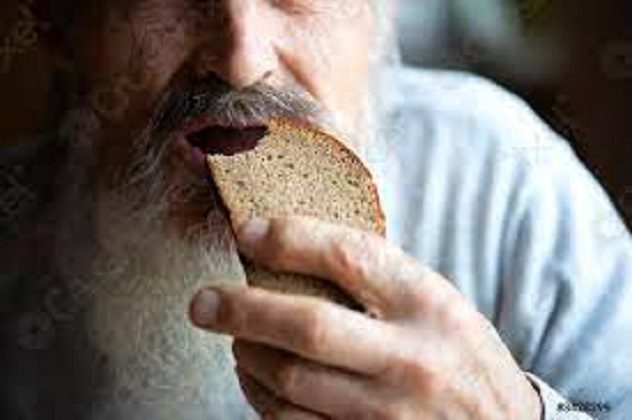 Though morbid, sin-eating was easy to do. Once notified of a death, the sin-eater would be expected at the wake and funeral. On occasion, they were contacted while someone was still in the throes of death. Their payment was in the form of a coin worth about four English pence, which amounts to less than a few dollars today.

For the ritual, the sin-eater would be brought into the room with the deceased, where they would take a seat facing the door. They would then be presented with a slice, or sometimes just a piece of crust, of the prepared bread, which they would wash down with some ale. The family members would often gather around the corpse, mourning and drinking ale, as the sin-eater ate. Once the “cursed meal” was consumed, the sin-eater would complete the ritual with a short prayer:[3]

“I give easement and rest now to thee, dear man. Come down, not the lanes or in our meadows. And for thy peace, I pawn my own soul. Amen.”

7 Were They a Scapegoat?

What is the Real Meaning of the “Scapegoat” (or “Azazel” in Hebrew)? • Spotlight • Desert Demon

In February 1931, The Irish Times linked sin-eating to the scapegoat from the 16th chapter of Leviticus. According to various Jewish sources, Leviticus 16:1-34 is the Torah reading for Yom Kippur morning. The focus of the passage is on offerings for atonement. The offerings discussed involve three live animals: two goats and a bull. The bull and one of the goats are sacrificed following God’s detailed instructions, while the remaining goat is designated “the scapegoat” and burdened with the sins of the Israelites. The goat is released in the final step of the ritual, leaving the people “clean before the Lord.”

The following passages reveal this connection. In Leviticus 16:21, it reads, “And putting both hands upon his head, let him confess all the iniquities of the children of Israel, and all their offenses and sins: and praying that they may light on his head, he shall turn him out by a man ready for it, into the desert.” And in 16:22: “And when the goat hath carried all their iniquities into an uninhabited land, and shall be let go into the desert.”[4]

6 There Were Other Theories 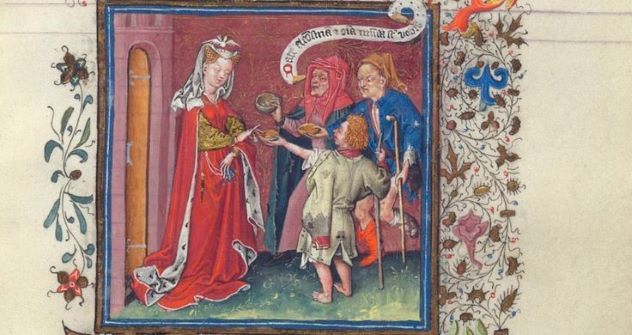 Others assert that the original sin-eater was Jesus Christ. According to the Bible, Jesus sacrificed his life to cleanse the sins of all humanity. It is a popular theory, even though Christianity disapproved of the practice. Another suggestion is that the ritual of sin-eating took inspiration from a tradition where nobles gave bread to the poor in exchange for prayers.

In the book Death, Dissection, and Destitute, Ruth Richardson speaks of a medieval custom where noble families would hand out food to the poor when someone died in an attempt for those people to pray for the soul of the deceased. Still, another theory held by scholars throughout history is that Pagan rituals served as the inspiration.

Some have claimed an even older potential origin—Egypt and Ancient Greece. Regardless of the origin, the apparent use for the sin-eater stems from the persistent, universal need to appease the souls of the deceased, to help the soul on its way, and to be rid of it, lest it return and cause distress among the living.[5] 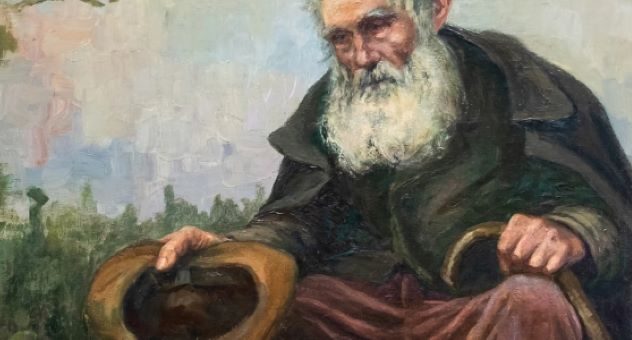 To those who believed in the powers of this ritual, sin eaters were doing a necessary but distasteful job, literally becoming a bit more evil as they performed their task. The only person willing to take on the position of the town sin-eater was a desperate one. So desperate that they were more concerned with free food and drink than they were eternal damnation. With no way to confess the sins of the dead, they had no hope of entering heaven.

The position typically consisted of the very poor, beggars, or drunkards. Some say many of them already considered themselves condemned for a past sin that could not be forgiven. Desperation aside, sin-eaters provided the dead and their families with an invaluable service and might deserve some semblance of gratitude or even respect. Instead, they were “driven out of the house with execrations and abuse, sticks, cinders, and every available missile being hurled” at them. The house and mourners feared being contaminated by their presence.[6]

4 They Were Shunned in Their Time 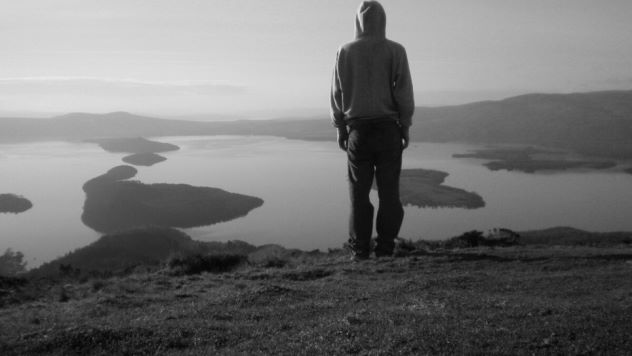 If meager pay and a hostile work environment were not bad enough, sin-eaters were also the epitome of social pariahs. They performed the ultimate service for the community, possibly the most important job there was, and were hated for it. People feared anyone willing to “pawn their soul” and refused to have anything to do with them.

Despite the value of the service, everyone believed that the act of sin-eating was dark magic, witchcraft, supernatural forces, or the work of the Devil himself. It was considered a sign of bad luck to look a sin-eater in the eye, even for a second. As a result, sin-eaters lived on the outskirts of town like lepers, shunned by society. Many did whatever they could to keep their business a secret.[7]

3 The Catholic Church Wanted Them Dead 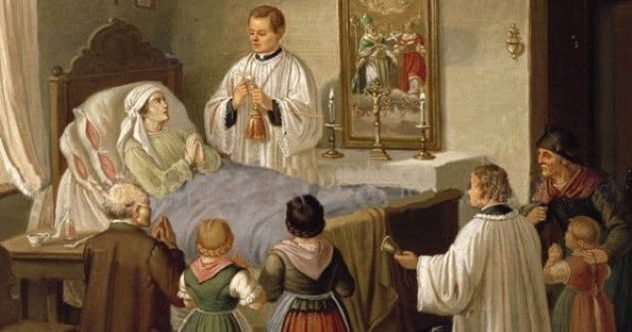 Sin-eating was neither supported nor sanctioned by the church. Despite the shared goal to help souls enter heaven, the ritual of sin-eating actively replaced the funeral rites that would have otherwise been administered by a priest. The church did not take kindly to the loss of business and placed severe consequences upon the practice. Sin-eaters were ex-communicated at best. At worst, they were tortured and killed.

Anyone who employed a sin-eater was considered a heretic, blasphemer, or worshiper of Satan. Communities had to be covert for fear of retaliation. Some believe that the sin-eating ritual first arose as an act of rebellion against the church because they “had been selling indulgences for a long time” before people finally said enough was enough—that’s not how “sinning and forgiveness should work at all.” Others suggest they simply could not afford to hire a priest.[8]

2 The Last One Died in the Early 20th Century

What Is a Sin Eater? | The Story of God

Sin-eating rituals mostly died out by the early 20th century. The last known sin-eater was Richard Munslow from Ratlinghope, a village in England’s West Midlands county of Shropshire, who passed in 1906. Unlike the typical sin-eater, Munslow was a respectable farmer from a wealthy family. According to local tales, he entered the profession “out of kindness and love for his fellow villagers.”

His decision is said to have been inspired by a personal tragedy involving the sudden loss of three of his children. In 2010, Reverend Norman Morris, vicar of Rattlinghope, led the villagers to raise thousands to pay for the repair of Munslow’s grave. At the time, Norris said, “This grave at Ratlinghope is now in an excellent state of repair, but I have no desire to reinstate the ritual that went with it.”[9]

1 History Shunned Them Too

Not many first-hand written accounts exist about sin-eaters because no one wanted to admit to having an association with such a controversial character. As a result, all information comes from only a few sources. In reality, the practice was much more widespread. Brand’s Popular Antiquities of Great Britain,” published in 1813, is a well-known resource.

More recently, Megan Campisi did extensive research for her 2020 book Sin Eater. She expressed frustration at the lack of available materials. Other media to take on the topic are The Order, a 2003 film in which Heath Ledger battles a modern-day sin-eater, and a 1972 episode of Rod Sterling’s Night Gallery called “The Sins of the Father.”.

Though the ritual of sin-eating is obsolete, some say the position has evolved to fit the times. Psychology Today has identified modern-day sin-eaters as social media content moderators, who are similarly low-paid and tasked with “consuming the worst horrors of the Internet.”[10]