At the end of the 1970s, merchandise from the Star Wars trilogy sent the toy market into a spin. Using characters from the movies, action figures took on a whole new money-making life of their own. Once large doll-like objects, primarily with military themes, these scaled-down characters were a fresh new take. This led to an action-figure frenzy.

From galactic warriors to hulking fantasy barbarians, it seemed like every month heralded the arrival of a new line. With movie and animation tie-ins, plastic maquettes flooded the shelves for the next decade. But, while some defined our childhood, not all were wanted and sat lingering in shops for some time.

Related: 10 Terrifying Toys From The Past

The array of Turtles figures released to capitalize on their initial success was huge. However, it followed a simple, rough formula. This included taking an anthropomorphic character, much like the Turtles themselves, and giving it some kind of gimmick. At one point, the consumer demand for new figures was so high new characters came that had not even been featured in the animated series. These included crazy concepts like a Shakespeare-loving lion and a firefighting dalmatian dog.

But none of these was as uninspired as Toon Burne. Part of a toon line that aimed itself at a younger audience, Burne was the boss of the Channel 6 news station that often-covered stories about the Turtles. A bedraggled, overweight, middle-aged man, it is quite unknown why someone assumed this would attract younger buyers. Just to make sure, they packaged him with an exciting array of items. Sandwich and typewriter, anyone?[1] 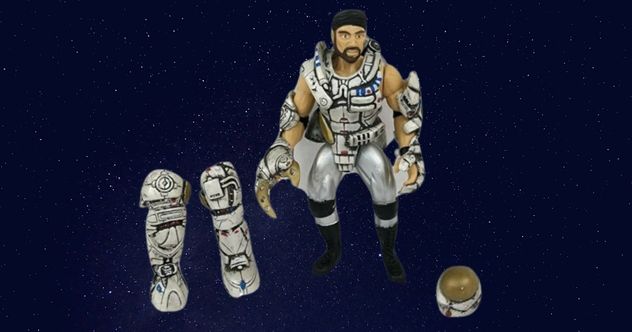 There are several lines and individual figures that WWE, or its former company name WWF, could have on this list. From Bret the Hitman Hart dressed as a 1930s gangster to the hideous Maximum Sweat line (yes, action figures that sweat), some true abominations have existed in the name of sports entertainment. However, none has been as boring as Marc Mero in space.

As part of the Space Domination Stomp 3 line, some wrestlers may have sported space versions. The Legion of Doom, with their post-apocalypse armor, fit the model anyway. Even The Undertaker of the future is a cool idea. Yet quite why mid-carder Marc Mero got a figure is unfathomable.

Sporting an outfit comprised of old washing machine parts, it was one of the few action figures of the wrestler to ever exist. Oddly, his wife Sable also has a figure in the same line, with her in a bikini accompanied by very little else. Unsurprisingly, most children didn’t feel the need to send their favorite superstars into space, not least Marc Mero, and the line soon vanished.[2]

History and Origin of GI Joe’s William THE FRIDGE Perry !

One of the most interesting things about G.I. Joe figures was the many occupations they had. Included on the backing card, each would let you know who the character was, if they were good or bad, and their role or specialism. In the early days, this was exciting as you got jobs you would expect in the military. Yet as the line went on, these jobs became wackier and more out there. At some point, it was decided G.I. Joe needed a real-life celebrity to be their physical training instructor.

William “The Fridge” Perry played defensive tackle for the Chicago Bears. A huge man, he was the heaviest person to ever score a touchdown in a Superbowl and has the largest Superbowl ring size in history. He is also the second real-life person, after Sgt Slaughter, to get their own G.I Joe figure.

The figure was available as a Hasbro mail-away promotion in 1986, though the figures arrived in 1987. Complete with an American football on a chain, it remains to be seen how well he would fare on the battlefield against Cobra with this unique weapon.[3] 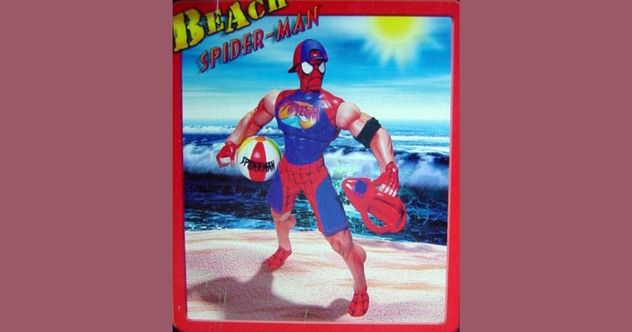 After saving the universe from Thanos and clearing the city of Kingpin’s criminal empire, even superheroes need to relax. That includes everyone’s favorite web-slinger, and while fans of Spidey may think relaxing on a rooftop with a pizza is his favorite way to chill, it is actually going to the beach. But only if you believe everything this figure tells you.

We are not sure why Spiderman wouldn’t just change to Peter Parker. Instead, he decides to wear a vest, keep his mask on and slip on some Spiderman board shorts. The figure also comes with lifeguard gear, such as a float and a handy beachball if the time comes when he wants to play volleyball with other heroes.

Part of the Adventure Hero line, it may not even be the weirdest figure. A colonial-era safari suit worn over his lycra is included with one toy, and an inline skater Spiderman is another. [4]

6 Masters of the Universe—Astro Lion

The Meteorbs – Oddities or just misunderstood? | The Toys of He-Man and the Masters of the Universe

The Transformers are a hugely successful toy line that arrived in the eighties and was a piece of marketing genius. These toys had been licensed from existing plans for various Japanese transforming robots. Once a backstory and animation were in place, mass sales soon followed. A craze for transforming figures arrived, and you would soon find them all over.

Masters of the Universe was another popular toy line of the decade. Yet when its popularity wavered, it decided to also try this tactic. One of its new factions was The Meteorbs. Based on a series of Japanese transforming eggs known as Tamagoras, they looked extremely out of place with the bulky mass of He-Man and his companions.

Astro Lion arrived later in the line’s popularity and was an attempt to try something that would keep consumers interested. However, a scrawny lion that changed into an egg was not something fans were ready for, particularly in a line that already had the iconic and fearsome Battle Cat.

This oddity was not the only transforming figure the line would try either. Stonedar and Rokkon were in the franchise and were heroes who transformed into exciting rocks. If you think this is a boring concept, then a whole other line of toys by Tonka would try this with their “Rocklords.” [5]

Star Wars is well known to have dredged every extra and background character in the race for new action figure material. Despite not being the most exciting, most could at least interact with other figures and serve a purpose. Few of them had an existence as pointless as the power droid.

A walking battery, the toy looked nothing like it did in the movie. It had very little articulation and was essentially a box on legs. Most people knew them as gonk droids because of the familiar noise they made in the movie. This meant that when the figure was on sale, no one knew what it was at all. The only positive thing that can be said about it is that it was one of the few figures that could stand on its own feet.[6]

The Transformers have great skill when it comes to making quite seemingly boring items cool. For example, one of its most iconic characters turns into a tape recorder. Yet occasionally, some mishaps have occurred in its long pedigree of excellent figures. One of them was the nerfing of Silverbolt.

Silverbolt was one of the Fuzors, a blend of two beast forms. In plain language, he was in the Beast Wars cartoon and was half wolf, half eagle, which made for a mean-looking toy. Coupled with his penchant for paladin-like verse, he was one of the standouts in the whole line. That was until the follow-up line Beast Machines when he would become what can only be described as a cartoon parrot.

In robot mode, Silverbolt looked bad. He had a small shapeless head, large paws, and a sword made from his translucent wings. Yet it was easy to see that this is why he was packaged in robot form, as his animal transformation was even worse. A vomit-colored cockatoo, his arms look like the last spicy wings in the bottom of the bucket.[7]

You can come to your own sordid conclusions about what the

The original toy line was created by LJN, a company now retrospectively scoffed at for how bad some of their figures were. They had atrocious console games and were responsible for a line of wrestling figures with no articulation.

Yet this long, bendable sandworm has to take the crown. It is astounding how no one at the company vetoed it before its release. In the scheme of phallus-shaped toys, it comes in second only to the ET finger light…[8]

One scheme crafty toy companies use to save money is to reuse the molds of previously released action figures. For example, He Man’s Battle Cat was originally a cast used with the Big Jim series of toys. Yet when it came to figures for the Robin Hood: Prince of Thieves movie, it seemed like manufacturers Kenner really couldn’t be bothered creating anything new at all.

Robin himself was recast from a Green Arrow figure used in the DC Superpowers line. Another entry was a treetop playset that was repurposed from an Ewok hideout. However, it was one of Star Wars’ most iconic figures, the Gamorrean Guard, who took the biggest insult.

All the company did was replace the head with that of a fat drunk and sell it as Friar Tuck. Not only was he one of the most uninteresting characters in the movie, but he also didn’t even get a new figure.[9]

Making figures for the Indiana Jones films seemed like an obvious choice. It was another George Lucas trilogy that was going to be a smash hit. Kenner, the makers of Star Wars, also had the license. What could go wrong?

The problem was that once children had Indy himself, the other characters were not that interesting after that. Where Star Wars had weird and wonderful aliens that fired the imagination, Indiana Jones just had people. Enter the German Mechanic.

This character appears in Raiders of the Lost Ark and engages in a fistfight with the main character. However, his clumsiness sees him get cut up by the propellor of a plane fairly quickly. And that is his narrative arc.

His figure is even more uninspiring. The ripped physique of the actor has turned into a flabby, balding middle-aged man who has taken his shirt off. How could it fail to prize pocket money from children?[10]