The writer Mike Sasso said, “Originality is the best form of rebellion.” He was surely right because a protest with an unexpected twist stands out from the rest. Adding a touch of originality, perhaps humor can make a protest newsworthy and, if done well, makes the message memorable.

People protest because they believe something is wrong and feel that a protest may make others listen. Hopefully, the protest reaches those in authority, but the ability to protest shows that democracy is alive and well. Here are ten bizarre protests you didn’t know about.

Alberto Fujimori, a Peruvian of Japanese origin, became president of Peru in 1990. He was always a controversial figure—left-wingers described him as a dictator—but many ordinary citizens supported him even when evidence that he was corrupt started to surface.

In 2000, Fujimori stood for re-election, but a group of Peruvian women was not impressed. They were convinced that the president was guilty of abuse of power and crushing opposition through violence. For months, they gathered on Lima’s main square and repeatedly laundered the Peruvian flag—a symbolic gesture that showed that the system needed a thorough cleaning.

After Fujimori wasn’t re-elected, he fled to Japan in November 2000. On an ill-advised visit to Chile in 2005, authorities arrested him and extradited him to Peru. He faced four trials over the next few years. The court found him guilty of various crimes ranging from corruption to murder. He received a 250year sentenced, but In March 2022, the Constitutional Court of Peru approved his release. However, that decision was reversed just two weeks later. As of today, he is still in prison.

Highway 32 links Leader to the nearest city of Swift Current in Saskatchewan, Canada. Leader has a population under 900, and Swift Current boasts around 17,000 people. Yet, this is no excuse for neglecting 100 miles of pavement. One cheap solution that officials tried was to gravel the entire surface. In the rain, vehicles sank into the gravel and got stuck.

Sick and tired of potholes that damaged cars and made even ambulance drivers reluctant to use the road, residents in Leader hit on a novel way to get the authorities to take notice. In 2006, local residents posed semi-naked next to their favorite pothole, took photos, and designed a calendar. An international success, the funds raised from the sale went toward a new community center in Leader, and the Highway Department re-paved the entire road.

Royal SHOCK: How the Queen was PELTED with eggs and MOONED at during royal visit – Today News US

Te Ringa Mangu Mihaka is better known as Dun Mihaka. A lifelong and still active defender of Maori rights and traditions in New Zealand, Mihaka is a writer and political candidate. Perhaps his most famous protest occurred when Prince Charles and Princess Diana were on a six-week tour of Australia and New Zealand in 1983.

For Mihaka, these representatives of the British Crown were potent symbols of oppression and disregard for Maori First Nation rights. One of the main reasons for Diana’s popularity was that she seemed to bring a human touch to the stilted ceremonial world of the British royal family. Mihaka took this informality a little further.

Mihaka surprised Charles and Diana by performing the ritual act of whakapohane as they were passing by—mooning, in other words. He also did the same when the Queen and Prince Philip visited in 1986. Mihaka’s insult showed just what he thought of their status; this action is still used today to model your distaste for others.

With his trademark charm, David Niven was presenting the Oscars at the 1974 ceremony. Niven was about to present the award for Best Picture when Robert Opel streaked across the stage. Opel was completely naked and flashed a peace sign. NBC broadcasted the entire episode live. Niven commented that this was bound to happen—streaking was in its heyday.

Opel wasn’t arrested, but he was asked to explain himself. Although he was a gay rights activist, he claimed that his streak was a more general protest against a society that was too conformist. This view of society was echoed in Opel’s other persona, Mr. Penis—a costumed crusader well-known in San Francisco.

In San Francisco, Opel ran an art gallery that showcased homoerotic art. In 1979, intruders burst into his gallery and demanded drugs and money. Opel refused, and the burglars shot and killed him.

How Years of PETA Protests Have Made Changes for Animals

People for the Ethical Treatment of Animals, commonly known as PETA, is a group with a talent for imaginative activism. Founded in Norfolk, Virginia, in 1980, PETA now has an international presence and fights against any abuse of animals. Animals have rights, PETA says, and should never be used in medical experiments, as food, or as entertainment.

In 2008, PETA bought an old prison in Maine to set up a Lobster Empathy Center. In their letter to state commissioners, the group wrote:

“A prison is the perfect setting to demonstrate how lobsters suffer when they are caught in traps or confined to cramped, filthy supermarket tanks. The center will teach visitors to have compassion for these interesting, sensitive animals while also commemorating the millions of lobsters who are ripped from their homes in the ocean off the coast of Maine each year before being boiled alive.”

Some protestors try to pull the wool over the eyes of authority. In France, this was taken almost literally. A school in Saint-Nazaire had one class that was one student less than the state minimum stipulated. The authorities closed the class. This annoyed students, teachers, and parents alike.

The parents occupied the school, and the teachers registered Vincent P. as a new student to bring numbers back up. Meanwhile, the students found a book bag for Vincent and made sure that he had enough to eat as the protest raged.

Vincent was a small, cute, black sheep. We don’t know how well he did academically, but the protest succeeded, and class resumed. 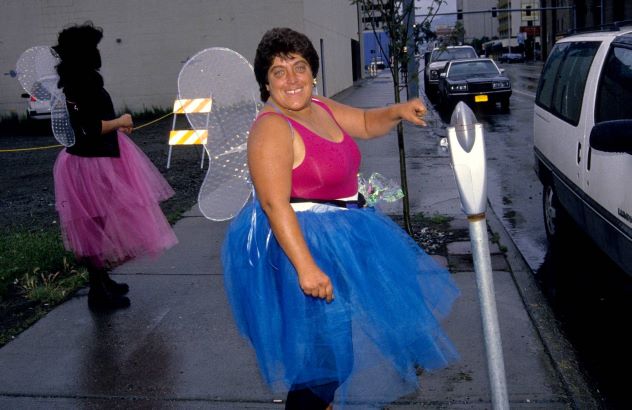 In the 1990s, many residents of Anchorage, Alaska, were thoroughly fed up with the local parking authority (APA). They were, it seemed, happily handing out tickets for offenses that had nothing to do with parking. Offenses include having snow tires fitted out of season, a cracked windshield, or having a license plate sticker on the wrong side of the plate. Caroline Pacillo got a ticket for the last-named infraction.

She and her sister decided it was time to wage war on the APA. The Pacillo sisters were formidable opponents. They collected donations and, dressed as sparkling fairies, went around downtown Anchorage, topping up meters that were about to expire. The APA patrolled on foot to beat them to the meters, but the Pacillo sisters motored around in a pink three-wheeler, beating them wherever they went. Highly visible and highly motivated, the sisters gained more and more public support.

The APA lost $100,000 in revenue in one year and disbanded after four years of campaigning.

We can’t know if Michael Jackson took any interest in the problems of the Chilean education system, but he was to play an important part in an attempt to reform it.

Students in Chile had long protested that the education system needed fixing and tuition fees were way too high. A wave of protests in 2011 involved banging pots and pans with protestors making a nuisance of themselves. Unfortunately, they didn’t seem to be getting very far despite months of effort.

So, in mid-2011, 3,000 protestors gathered in front of the presidential palace. They had loudspeakers and were dressed as zombies. On cue, Michael Jackson’s “Thriller” blasted, and the protestors copied his dance moves in a well-practiced effort to make their protest stand out. It didn’t work, but it was memorable.

Chile is one of the most successful countries in South America, but protests continue regarding its education system.

2 Bring on the Clowns

The Clandestine Insurgent Rebel Clown Army (CIRCA) had its origins in a protest against President George W. Bush’s 2003 visit to London. From humble beginnings, the group has risen to become an international movement that stages protests all over the world.

CIRCA is not a group of people who dress up as clowns—they are clowns. Members study the craft with professional help; there are manuals and training programs. They feel deeply about the causes that they support but take their craft seriously.

A stated aim of the group is to combine non-violent, direct action with clowning. Obviously, the group is highly-visible and offers photographers the perfect shot when the police intervene. Highly effective, in other words.

1 Fight Back with Barry

Health authorities in New Zealand took a very hard line when it came to combatting coronavirus. The country isolated itself from the outside world and attempted to vaccinate the entire population. As in many other places, this did not go down well with some of the population. In many countries, similar protests became heated and sometimes violent. Not in New Zealand.

Protestors gathered on the lawns outside the parliament building. There were only a few hundred, but they made a lot of noise and got a lot of press coverage. Not willing to risk a violent confrontation, the authorities turned on the sprinklers. This had the opposite effect to that intended. Protestors dug trenches with drains, and a downpour made the measures irrelevant. More protestors turned up to enjoy the fun, bringing bales of straw to sit on and spending their time dancing and shouting. Soaked but happy, the protestors carried on.

The government fought back. They set up loudspeakers that broadcast messages, the catchy dance tune “Macarena,” and Barry Manilow songs on a constant loop. The protestors responded with their own songs. All had great fun until the protest petered out. Both sides dealt with a potentially highly charged confrontation with great good humor.