As the most ghoulish celebration on the calendar, Halloween has long evolved to become the sugar-loaded spook-fest that we know today. However, its origins lie in the Celtic festival of Samhain, celebrated by the pagan Celts who lived in modern Ireland, Scotland, Wales, England, and parts of Europe over 2,000 years ago.

Many of the Halloween traditions we celebrate today evolved during more recent centuries, alongside the spread of Christianity in the West. Nevertheless, while documentary evidence is a little sparse, it looks like many of these older traditions can trace their roots back further still to the Celts. Here are 10 Celtic Samhain traditions that appear to live on in the way we celebrate Halloween today.

10 Waiting for the Darkness

Most Halloween fun tends to take place under cover of darkness. From trick-or-treating to costume parties, the majority of our traditions occur at night. An emphasis on the supernatural significance of darkness was central to the Celtic festival of Samhain. The name Samhain itself means “Summer’s End” in the Gaelic language of the Celts, but it also refers to the Celtic spiritual figure of the same name. Samhain was known in Celtic mythology as the lord of the winter—a time when the world became cloaked in darkness. Each year, as summer drew to a close, he would engage in a six-month battle of light versus dark with the sun-god Bael.

The Celtic calendar itself was divided into two halves: the light and the dark. The Samhain festival was one of four fire festivals that marked important parts of the year, with Samhain marking the beginning of the dark half of the year. Each part of the year was significant to the Celts for their own reasons, but the darkness of winter was a particularly tough one. Just like the traditions of today, Samhain celebrations long past embraced that darkness.[1]

Just like today, Samhain was celebrated from October 31st until November 1st and marked the halfway point of fall. In fact, it took place exactly midway between the fall equinox and the winter solstice, which was the time of year when the all-important harvest was gathered.

This point in the year when autumn begins to touch winter was also seen as a time when this world would collide with the next. It was considered the point at which the veil between worlds was at its thinnest and, thus, when the spirits of the dead were most likely to enter the world of the living. This belief, combined with the Celtic themes of darkness and death that accompany this time of year, has resulted in current celebrations being associated with all things spooky.[2]

Along with New Year’s Eve, Halloween is probably one of the biggest party nights of the year. People of pretty much any age will usually receive an invitation or two to a Halloween shindig. The Celts liked a good party, too, and Samhain was one of their biggest festivals. They may even have partied harder than us, as early texts indicate that it was a mandatory celebration that could last up to three days. Some documents even mention an absolute excess of drinking and gluttonous eating, which doesn’t sound all that different from the celebrations of today.

The modern custom of standing around an open fire on a chilly Halloween night is similar to Celtic Samhain fire traditions as well. In fact, it was a crucial part of the communal festivities. During the Celts’ harvest period, the hearth fires of family homes were left to burn out. Once work on the harvest was complete, people would celebrate by joining priests in lighting a ritual communal fire. The fire was ignited using a wheel that caused friction and sparks and was considered a representation of the sun. Next time you want to compete with your neighbors’ Halloween decorations, perhaps a blazing Celtic wheel might be the key to outdoing them![3

Given that Samhain was associated with a breach between the worlds, it’s unsurprising that a few ghouls and monsters of Celtic mythology were also tied with the festival. Some of these included a shape-shifting creature called a Pukah, as well as a headless woman who would chase those wandering about at night.

The witches associated with Halloween today may be linked with a pagan figure known as the Crone, who was celebrated during Samhain. Known as the Earth Mother, she symbolized wisdom, change, and the shifting of seasons.

One of the scariest mythological figures was, however, one that still terrifies us today: the headless horseman. Known as the Dullahan to the Celts, the horseman was said to be the embodiment of the fertility god Crom Dubh. He was said to demand blood sacrifice in the form of decapitation and was described as having a face of decayed flesh. Not the most attractive of gods, but at least he would make for a great Halloween costume.[4]

The Origin of Halloween | Why do we wear costumes for Halloween? | EXPLORE MODE

Although donning a scary costume to go trick-or-treating has obvious ties with the Medieval custom of “mumming” or “souling,” its practice appears to go back even further. Given that the Celts believed that spirits could cross over during Samhain, they held the suspicion that ghosts and ghouls might try to trick, haunt, or curse them. In order to prevent this, they would often dress up as monsters themselves to fool the evil spirits.

Another fear was that faeries might steal your soul during Samhain. As well as disguising themselves as monsters, Celtic pagans would mitigate this eventuality by dressing up as animals. So, wearing a cute bunny costume at Halloween may not be so silly after all![5]

How to carve Moots – turnip Jack-o-lanterns

That familiar orange glow burning from a toothy jack-o-lantern may trace its roots back to the Celts as well. Some historians believe the tradition of carving heads out of root vegetables may harken back to pagan customs of head veneration. This idea may have taken greater hold during Samhain when creepy faces were carved into vegetables as another tactic for warding off restless souls. Initially, carving beets, potatoes, and turnips seems to have been favorable, as there was typically an abundance of them after the harvest.

Another slightly more functional advantage to carving lanterns from vegetables was their practical purpose for the Celts. It was a far more affordable option than using expensive metal ones.[6] 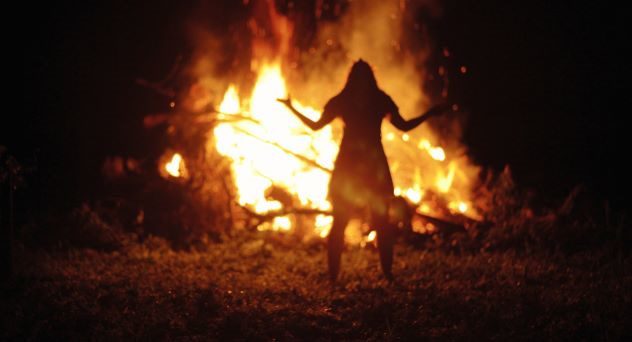 Stroll around any neighborhood during the Halloween season, and there can be little doubt that the holiday has a very specific color theme—orange and black. From banners to napkins and candle holders, homes are awash with the distinctive color pallet. For the Celts, the color black represented the darkness of the winter months that Samhain would usher in. It also held significance as a symbol of death, both in terms of the deceased spirits who would mingle with the living during the festival, as well as the death of nature as winter drew near.

The use of the color orange was also twofold for the Celts. On the one hand, it represented the gradual turning of leaves from green to orange as summer came to an end. In addition to this, it reflects the burning embers of the ritual and community fires that were lit during the festival.[7]

The Pagan Origins of Trick-or-Treating

Both the tricking and the treating aspects of this quintessential Halloween tradition have links to Celtic Samhain customs. The belief in evil spirits crossing over may have led not only to the Celts dressing up as monsters to trick them but also fueled the fear that they themselves would be tricked. One particular concern centered around the belief that evil spirits might come to your door disguised as a beggar. If you refused to give them a handout, they would transform before your eyes and place a curse upon your soul.

One method of dealing with those pesky spirits and faeries was to placate them by leaving a generous banquet or food offering outside your home. As a pagan society, it also wasn’t uncommon for the Celts to leave ritual offerings during this precarious time of year.[8]

Dunking your head in water to fish out some apples dates back to the Celts, too, although it’s unlikely that their versions were candied. With the boundaries between worlds thinned out during Samhain, the Celts believed it was the ideal time of year to tell fortunes and prophesize the future.

Fruits of the harvest seem to have been the most common items used to predict someone’s destiny, especially apples and nuts. Apple bobbing was one of the most popular practices, and it was believed that the first person to bite into one would be the first to marry.[9]

Just like Halloween celebrants today, the Celts enjoyed freaking out their friends with a terrifying story or two. “The Second Battle of Mag Tuired” seems to have been one of the most popular Samhain stories told around the festival fire. The myth tells of a great conflict that took place over the course of Samhain. It describes the final battle between the Celtic pantheon of the Tuatha dé Danann and their evil tormentors, the Fir Bolg.

Another Celtic story involving Samhain centered around the adventures of a hero named Nera. The warrior Nera was dared by a king to place a willow branch at the foot of a corpse. Accepting the task leads Nera on a journey through a strange Other World that bordered the land of the living. Within this strange world, he has all manner of supernatural encounters. It’s a tale that sounds just as exciting as some of those we hear around Halloween today![10]