Halloween haunted houses bring out the inner child for many enthralled with the spooky, candy-filled holiday. Though scary—with all good intentions—often, the dangers that come with such frightening attractions are overlooked or forgotten. The following ten experiences explore scenarios never anticipated yet, injurious to one’s psyche.

Sadly, the only thing scarier than walking through a haunted house is working for one. Frequently, “scare actors” are confronted by intoxicated belligerents who can assault them with impunity. “You pretty much name it, and people have experienced it,” said William Gailit, an actor who was kicked in the face at Universal Orlando’s Halloween Horror Nights. Actresses face harsher treatment, including groping of breasts and genitals to threats of rape and actual physical assault.

Universal actor, John Deen, had to be rushed to the hospital with a concussion and skull fracture after being ambushed by a group of brazen drunkards. Actors also have a history of being kicked off their stilts, punched in the chest, repeatedly stomped on, and sometimes sexually assaulted. Catching assailants is usually impossible as they merely disappear into the crowd. More infuriating is that those caught are frequently told to merely “not return to that area of the park.” Keep in mind that a majority of actors outside of big-name attractions such as Universal Orlando tend to be teenagers simply trying to earn a buck in an environment they assumed would be fun. Truth is, it’s a crude and sad awakening of what some people in the world feel they have the right to do.[1]

Sarah Lelonek, a haunted house enthusiast, got more than she bargained for when she and her boyfriend, Ryan Carr, visited the Akron Fright Fest in Ohio. While walking through the spine-chilling rooms, a tall man who looked like “Leatherface” emerged from the shadows, grabbed her boyfriend, forcefully shoved him onto a plywood bed, and began to simulate a mock rape. “That’s my boyfriend!” said the 31-year-old, “Please stop!” Her demands fell on deaf ears as the mystery man continued to vigorously thrust away while stating, “He’s not your boyfriend anymore. I’m going to rape him.”

Eventually, the masked seducer freed Ryan, leaving him sore and feeling less of a man. The couple immediately left the premises, but the experience stayed with her, given countless friends who had experienced sexual assault: “It was a PTSD situation,” Sarah said. The following day she took to social media, stating, “If you are a victim of sexual assault, do not go to the attached haunted houses. This is a non-waiver house. Nothing was signed. I repeat. Not one thing was signed. Kids go in this.” The park fired back, claiming that their haunted houses are all “professional,” “safe,” and “in a controlled environment.” It is unknown whether the Halloween fanatic will ever return to her favorite pastime of frights.[2]

Keller then proceeded to use his colorful vibrator to poke at Janito’s daughter in a sexual and aggressive manner while repeating lewd and offensive remarks. Meanwhile, the other maniac was busy simulating a sex act with the poor defenseless teddy bear. Understandably, Janito and her girls fled as fast as they could from the haunted attraction. Keller was later arrested and charged with battery and disorderly conduct. Within days, Janito filed a lawsuit against the company that stated, “The acts committed by Keller and John Doe were beyond the standards of civilized decency and beyond the scope of what society is willing to tolerate.”[3]

An overzealous actor at the Cuyahoga County Fairgrounds in Ohio took his performance quite seriously when he chose to use a real Bowie knife instead of a prop knife provided by the haunted house. In doing so, the 22-year-old turned the “7 Floors of Hell” into a real-life slasher flick. Wielding the weapon to elicit screams of terror, the unidentified “actor” found his weapon entering the foot of an 11-year-old boy who was accompanied by his mother. Surely, the family duo got their money’s worth in terms of panic.

Following a brief investigation, the performer agreed with police that using a real hunting knife “was not a good idea.” With paramedics on the scene, the boy was treated and, surprisingly, chose to re-enter the Halloween attraction yet again. Apparently, nothing—not even a 12-inch blade to the foot, let alone a haunted house—can scare this kid. In the end, police confiscated the bloody knife, and the actor was later fired.[4] 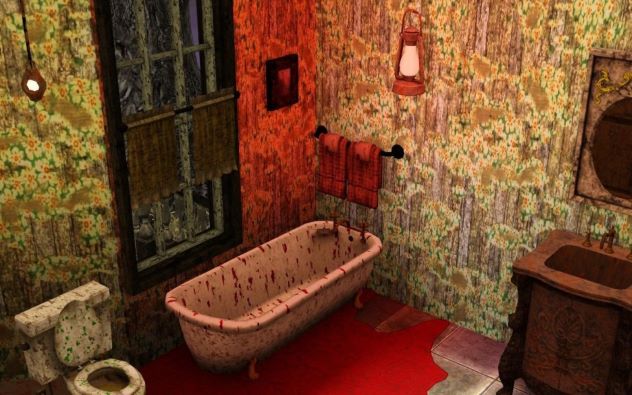 In 2011, Jessica Rue took a job at “Creepyworld” in Fenton, Missouri scaring guests as they walked through a bathroom drenched in fake blood. The scene included a bathtub, a mangled mannequin, and a noose. On Jessica’s second day, the 17-year-old slipped off the edge of the tub, causing her neck to become caught in the noose. She would hang there for up to 10 minutes as visitors passed by, thinking she was a dummy.

Jessica would remain in a coma and hooked up to a ventilator for the next three days due to a severe lack of oxygen to the brain. Miraculously, the high school senior pulled through, albeit with lasting side effects. A year following what could have been a catastrophe, Jessica was left with zero recollection of the accident or the weeks leading up to it. In addition, she suffered—and perhaps still does—from blackouts, short-term memory loss, change in personality, and heart flutters; nevertheless, she’s alive.[5]

On a Friday evening in 2014, 16-year-old Christian Faith Benge arrived at the “Land of Illusion Haunted Scream Park” in Middletown, Ohio. The teenager attended with her family to watch her father’s band perform at the festival. Following the performance, Christian and her mother entered the theme park’s haunted house; minutes later, the girl was dead. Despite efforts from her mother performing CPR, Christian succumbed to a heart attack. Autopsy results revealed that the teen had a pre-existing medical condition where the walls of her heart were unusually thick, causing the heart to be four times bigger than normal.

When questioned if fear had led to a fatal exacerbation, Coroner Doyle Burke could not provide a definite conclusion. “I guess that’s the million dollar question, we’re going to attempt to answer that, but I don’t know if we will ever be able to,” Burke said. “It did occur inside this haunted attraction, is there a connection? Maybe.”[6] 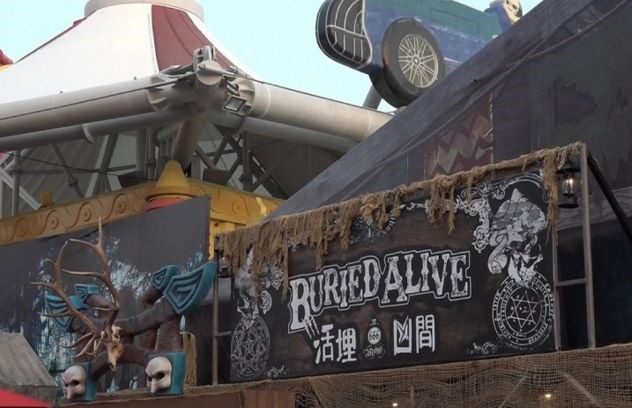 Always abide by the rules, especially around dangerous mechanical equipment that can turn you into pieces within a blink of an eye. Such was the case for a 21-year-old man at an attraction at Hong Kong’s Ocean Park in 2017. While visiting the fairgrounds with friends, a man by the name of Cheung decided to depart from his group inside the haunted house “Buried Alive.” Five minutes later, Cheung’s lifeless, shattered body was discovered.

For unknown reasons, the young man decided to enter a restricted area that housed mechanical machinery, according to the Hong Kong government. During his sightseeing shenanigans, the thrill seeker was crushed after being struck by the theme parks moving coffin-turned-slide. Part of the adventure of the haunted house places visitors inside a sliding coffin where one undergoes being “buried alive alone, before fighting their way out of their dark and eerie grave.” Apparently, Cheung wanted the full experience and, for that, ruined everyone else’s day at the fairground, given that the government ordered the closure of the haunted house in its entirety.[7] 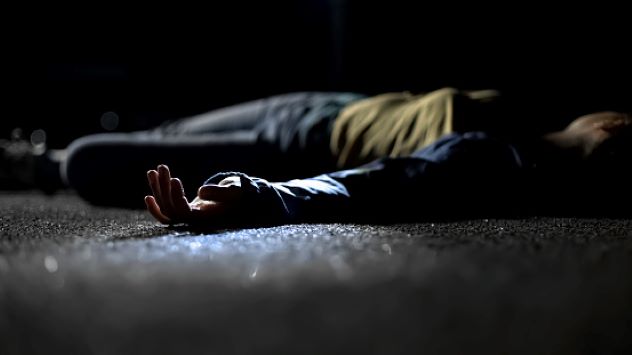 “The Nightmare at Floydville Road” in Connecticut saw hundreds of visitors on the evening of October 24, 1997. As they passed to make their way into the haunted house, many found it odd to see a Halloween mannequin lying in the road, not realizing it was Kimberly Kitrinos, 40, a victim of a hit-and-run. One passerby, Gale Fulton, even saw Kimberly reaching up for help but dismissed it, believing it was part of a Halloween act. When they realized it was not part of the performance, Kimberly was already dead.

As days passed with no suspects, detectives gathered evidence—a car mirror and red paint chips—and, with the help of automotive parts dealers, narrowed down the make and model. With a list of 250 vehicles registered in the surrounding area, police were closing in. The first door detectives knocked on was that of 54-year-old Bruce Imbt. Not at his residence at the time, police issued a warrant for his arrest.

The following day, the killer turned himself in. He had been drinking that evening and, in the days following, did everything he could to conceal the crime. Infuriatingly, Impt only received a sentence of two years imprisonment in August 2000 for the fatal hit-and-run that he so desperately tried to evade. Justice denied, yet again.[8] 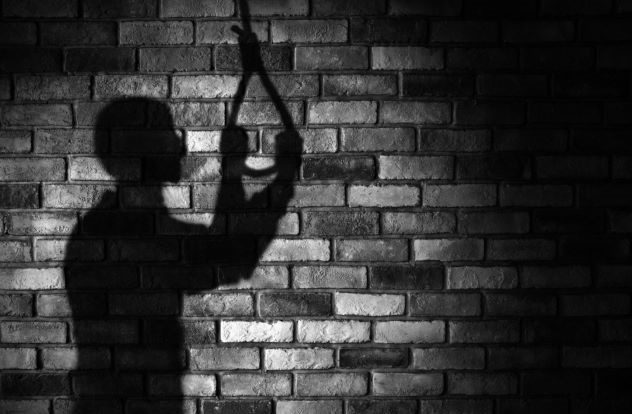 In September 1957, in Utica, Kansas, high school English teacher Betty Stevens wanted to create a fun, wholesome, and above all, safe pre-Halloween experience for students to enjoy. The idea was to keep kids out of trouble one evening by arranging a trip through an abandoned farmhouse turned “haunted house.” Seniors helped arrange the scenery by setting up spooky decorations—steer bones, toy rattlesnakes and skulls, etc.—hoping the freshmen class would get a fun, memorable scare.

Even Principal William Hobert Sallee, 60, became part of the festivities by donning clothes splattered in ketchup and greasepaint. Principal Salle took it a step further, however, by creating a mock hanging of himself. At some point during the tour, Salle’s feet—which were initially barely touching the ground—slipped from beneath him, causing the rope to tighten around his neck, strangling him. As students filed past, he was noted moaning softly in a limp posture. When the tour was over, and Salle had yet to emerge from the barn, Mrs. Stevens found his corpse. She most definitely succeeded in making a memorable evening the students would never forget.[9]

On the evening of May 11, 1984, smoke billowed over Six Flags Great Adventure in Jackson, New Jersey. A blaze had broken out in the amusement park’s haunted house attraction, “Haunted Castle,” a building constructed of 14 aluminum trailers measuring 70 by 100 feet (21m x 30m). Inside the attraction was a long, corridor-like maze of “spires and turrets and arches and walls that looked like they were made of yellow stucco” with the intention of someone surely becoming lost. When the fire was extinguished more than an hour later, authorities prematurely assumed that everyone had escaped with their lives.

After combing through the rubble later that night, eight bodies in a group were discovered in the rear of the building, only 25 feet (7.6 meters) from a fire exit. Authorities on the scene—surrounded by the nauseating smoke of seared and blackened melted aluminum—were puzzled as to how the teenage victims failed to make it out. After all, the design was intended for one to become disoriented like a rat in a maze. Unfortunately, in this case, that played into the deaths of all eight youths by smoke inhalation with no direction or knowledge of an escape route.[10]

10 Haunted School Stories That Made The News