You probably picture pigs running around in a field or rooting in the dirt when you think of the porcine creatures. But what if we told you that these animals are also incredibly brave in addition to being adorable?

Pigs have been around for thousands of years and are among the most common farm animals. They’re intelligent and trainable; they even make great pets! But what’s most remarkable about these creatures is their ability to overcome incredible odds to save their friends and family.

So here are ten stories about heroic pigs from all over the world, from fire rescues to fending off robbers and more.

It’s no secret that pigs are some of the most heroic animals on Earth; they’re just too cute to be anything but. But when you’re a pig with an owner who’s a veteran, your sense of duty gets kicked up a notch. That’s what happened to this little piggy who saved his owner from an apartment fire.

In April 2022, a 500-pound (226-kilogram) pet pig named Hamilton helped his owner, 30-year-old Gilbert Anaya, escape from a New Jersey house fire. Hamilton assisted Anaya by shutting the door to the garage, slowing down the spread of the fire as the animal escaped from the burning building. Anaya, asleep upstairs, awoke to smoke and went to check on Hamilton but saw he had already fled the burning garage. He was calmly grazing in the yard.

The fire department told Anaya that Hamilton closing the garage door bought him an extra 15 to 20 minutes to escape, ultimately saving the veteran’s life. Anaya further revealed that Hamilton, who’s been his pet for over six years, is trained to close doors, and he just instinctively closed the garage door as he escaped with his owner.

Fortunately, neither Anaya nor Hamilton was injured in the fire. However, their apartment complex burned to the ground, and they are staying with a friend of Anaya’s for the time being.[1]

These pigs are being used to keep the skies safe around Amsterdam’s Schiphol Airport safe. 🐖

You may have heard that pigs are pretty intelligent, but did you know they’re also elite soldiers? At the Schiphol Airport in Amsterdam, a special unit of pigs is trained to protect the facility from geese. The pigs undergo rigorous training to learn how to patrol and catch the birds, which can be quite dangerous when they get too close to planes or other people.

The airport management of Schiphol claims that geese “pose a serious risk to aviation safety” because they are large, fly in flocks, and can do significant damage to aircraft even if only one goose is involved. The problem with geese at airports is that they often get lost and confused while migrating, which can lead them into dangerous situations where they need help from humans or other animals.

The airport has tried multiple technological ways to scare off the birds, like using green lasers, but the team of trained pigs proved to be the more effective tactic at the end of the day.[2]

It’s a classic tale of heroism: A pig that survived one of the most devastating earthquakes in history. The Sichuan earthquake that struck the southwestern part of China on May 12, 2008, was one of the deadliest natural disasters in history. The 7.9 quake killed over 80,000 people and left about a million people homeless.

But amid all the chaos and devastation, one unlikely hero showed up during this tragedy’s chaos.

Zhu Jianqiang, or “Strong Pig” due to his extraordinary will to survive, was one of the survivors in an area the earthquake had leveled. He kept himself alive under the rubble for 36 days with water and coal. Dropping a significant amount of weight from 331 pounds (150 kilograms) to a meager 110 pounds (50 kilograms).

The quake made Zhu Jianqiang a celebrity, and the privately run museum complex commemorating this amazing feat adopted him to be a living symbol of China’s resilience in the face of a tragedy like the Sichuan earthquake.[3]

Have you ever wondered what kind of hero would save your home from being robbed? If you’re like us, you probably thought of a dog. Maybe a cat. Or maybe even an elephant. But did you ever think of a pig?

On July 31, 2018, a woman and her four children nearly became the victims of a home invasion. But unlike two of their neighbors (who lost everything when the thieves were successful at their homes), these lucky folks were spared when their heroic rescue pig, Dumplin, scared off the intruders trying to break into the family’s house.

The woman and her children had recently adopted Dumplin from a shelter and have been living with them ever since. Maybe scaring off the robbers was his way of repaying the family for rescuing him.[4]

6 Lulu the Pig Saves Her Owner

Lulu to the Rescue – It’s a Miracle

When it comes to medical emergencies, you expect someone who at least knows the basics to help you, but what if you’re all alone and your pot-bellied pet pig is the only companion you have at the moment? Well, in this story, we’re going to look at Lulu, a pig who saved her owner from near-certain death.

Jo Ann Altsman was all alone when she suffered a heart attack—her husband was away fishing. Her only companion in her home was her pet pig, Lulu. When Jo Ann felt the chest pains, she called out for help, but no one was within earshot. She feared that this attack could be fatal.

But Lulu came to the rescue. She ran through the door flap and through the front-yard fence—becoming injured along the way. She made it to the road, where she lay down, hoping someone would stop to check on her. After several cars drove around the motionless pig, someone finally stopped. Seeing the injured pig, he called for help and received Jo Ann’s return call help in response. The man acted fast and was able to call for paramedics to help Jo Ann. All thanks to Lulu.[5]

In a world where pets are considered family members, it’s not surprising that some people would go to great lengths to protect their cherished companions. But one woman took her pet pig’s safety to the extreme when she was trapped in a fire.

Tulsa resident, Courtney Goff, lost everything to a fire one Saturday morning. Her pet pig, Theo, woke her up when he noticed the fire. Goff thought he was just hungry for his usual midnight snack, but when she saw the fire, she immediately rushed to get her father and friend. Unfortunately, Theo was left behind.

When Goff tried to return to him, the fire was too big, and firefighters forced her out of the house. She begged them to rescue Theo, but it was too dangerous. Not caring for her own safety, Goff rushed back into the burning building to try and find Theo herself, but the firefighters once again forced her out.

Later, they found Theo’s body in the burned debris, and Goff plans to have him cremated and hold a memorial for the pig that saved her life.[6] 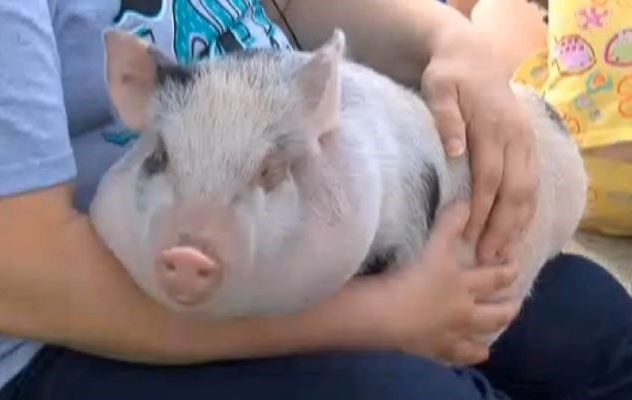 It’s not every day that you hear about pigs saving families. But it does happen, and it’s pretty great. Lucky is one such pig. Lucky is a heroic pig credited with saving Ina Farler’s life and her two grandchildren after a fire broke out in their mobile home one early Sunday morning.

While Lucky usually woke the family in the morning, Farler became concerned when she heard him squealing at 4:40 am. When she woke up, she saw the room was full of smoke. That was when she knew the trailer was on fire.

Thanks to the swift action of Lucky and a helpful neighbor, Farler escaped with her two grandchildren before their trailer burned down. Firefighters swiftly put out flames that destroyed everything inside, but everyone got out alive! The family’s beloved pig is safe as well.[7]

3 Pig Rescues Friend from Being Butchered

When pigs are butchered, it’s a sad day. But one pig decided that he wasn’t going to take it anymore. He decided to save his friend from the butcher’s knife. A pig in Banan District in Chongqing, China, was filmed rescuing his friend who was being prepared to be slaughtered.

The short clip showed the pig charging at the men who were holding another pig down for slaughter. Startled, the men let go and backed away from the angry swine. But the pig didn’t stop there; it turned and charged at the man holding the butcher knife to keep him away from the other pig.

Although it’s not known what happened after the clip ended, the pig’s heroic act to save his friend, though short-lived, was enough to get the video to go viral for a time. Proving that even pigs can at least try to save their friends.[8]

Norm McDonald is a Canadian comedian with a whole lot of funny stories up his sleeve, but one story, in particular, came from his Canadian hometown of Monkland. Norm recounts a story of when he visited his hometown and went to an old neighbor of his who was a farmer. The farmer was showing him his pigs when Norm noticed one with a wooden peg leg.

He asked the farmer what happened, and he told a story of when their house caught fire; the pig broke out of his pen and went into the burning house to wake up the farmer and his family. They managed to escape the fire thanks to the pig.

Another story the farmer recounted was when his son fell down the well, and the same pig tugged at the rope down the well until the boy managed to climb back out. Norm’s hometown of Monkland is full of funny stories, but the one with the hero pig with the wooden leg is the best out of everything.[9] 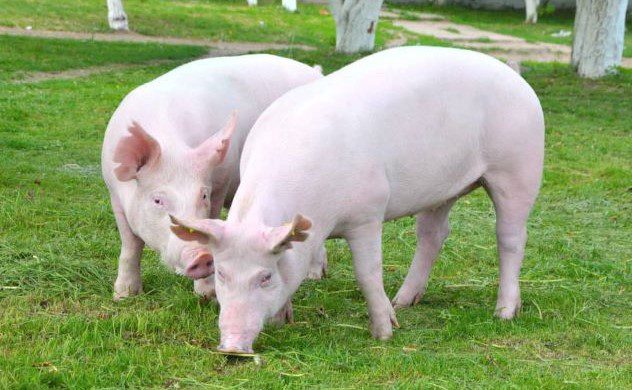 Pigs might look like sweet and cuddly creatures, but don’t be fooled! They are also fierce warriors who will do whatever it takes to protect their families, and Arnold is one such pig.

The 300-pound pet pig became a star attraction in his Minneapolis neighborhood after he saved his owner one February when two men threatened her in her garage.

Moyer said she had left the side door open and soon felt something like a gun in her back. She went into the kitchen where Arnold was lying on the floor; when Moyer began screaming, Arnold sprang into action. Moyer said that Arnold swung around and bit the man right in his calf muscle. The guy yelled, then ran out of the room with his friend. Her other pet, a Vietnamese pot belly named Axel, hid under a chair the entire time.

Although police have not arrested any suspects in the incident, it prompted Arnold to receive an award from the Minneapolis Police Department. His status as a neighborhood mascot has made Moyer well-known among residents of Stevens Square, a crime-plagued area where she lives.[10]