Egypt was one of the first great civilizations on earth. They lived at the dawn of history, in a time that was very different from the world we live in today.

One of those differences was their gods. The Egyptian gods had the heads of animals. That might seem like a tiny detail, but it changed the way the lived in more ways than you might imagine. In homage to their gods, the Egyptians treated animals with a reverence that we don’t share—and that led to some truly bizarre moments that history usually leaves out.

10They Gave A Bull A Harem 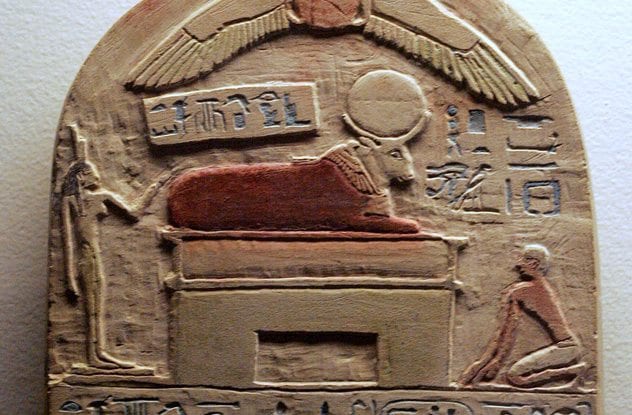 Throughout most of Egyptian history, there was always one lucky bull who got treated like a god. They called this bull “Apis,” a divine animal made flesh on Earth. They would choose one with what they believed were holy markings, bring it to the temple, and give it a treatment that human beings could only dream of.

The bull’s life was amazing. He received a harem of cow concubines to choose from and lived on a diet of cakes and honey. The Egyptians would throw parties on the bull’s birthday, and they would let him choose their oracles. They even performed sacrifices for the bull. They would bring oxen and cows in front of him and butcher them in tribute—which must have come across as a bit of a mixed message.

Human women were forbidden to touch the holy bull—except for during a fourth-month period when it would be brought to the city Nicopolis. There, the women would bare their bodies in front of the animal. Just because it was a bull, the Egyptians figured, didn’t mean it couldn’t appreciate a woman’s breasts.

When the bull died, it received a king’s burial. Then a new bull was chosen, and the whole routine started over again. 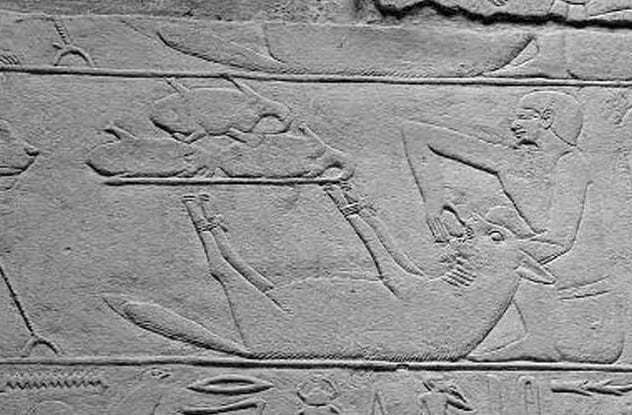 Before we settled on dogs and cats, humanity experimented with domesticating some strange animals. 5,000 years ago, the Egyptians tried to domesticate the last one you’d expect: They kept hyenas as pets.

Based on the images left behind in the tombs of pharaohs, hyenas were used like hunting dogs in 2800 BC. Great Egyptian rulers would chase after animals with a mixed pack of hunting dogs and hyenas.

They were not, however, particularly sentimental about these pets. While the hyenas enjoyed domestic life, their owners were fattening them up for supper. Once a hyena got big enough, it was killed, stuffed full of food and spices, and fried up for a feast.

Hyenas don’t seem to have caught on as a pet. After a few generations, the Egyptians gave up on keeping savage, cackling animals around the home. For what was probably a very good reason, it was cats and dogs that stuck around.

8The First Pharaoh Of A United Egypt Died By A Hippo 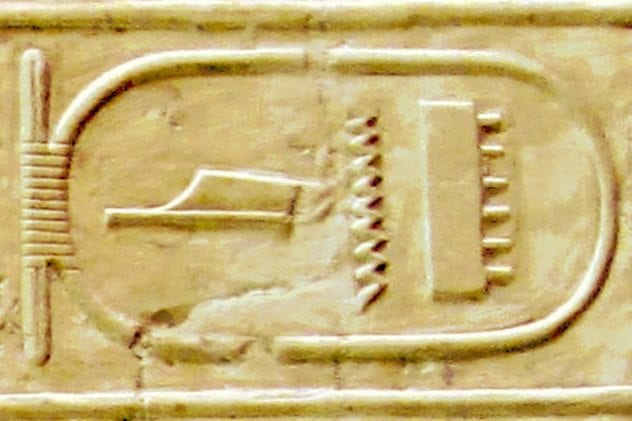 King Menes was the first Pharaoh to rule over both Upper and Lower Egypt. He lived around 3000 BC, and he was one of the great legendary figures of Egyptian history. He united the nations, ruled over them for 60 years, and then was dragged off and killed by a hippopotamus.

There aren’t really any other details to this story. The whole thing from the Egyptian historian Manetho, who simply wrote, “Menes was the first king. He was snatched and killed by a hippopotamus.” and left it at that as though he couldn’t imagine anyone having any follow-up questions about how, exactly, that went down.

Since this happened 5,000 years ago, it’s perfectly possible that it’s just a myth—but that’s even stranger. Menes was an Egyptian hero. If the story’s made-up, then that means that the Egyptians viewed being dragged off and killed by a hippo as an end fit for the greatest of kings. 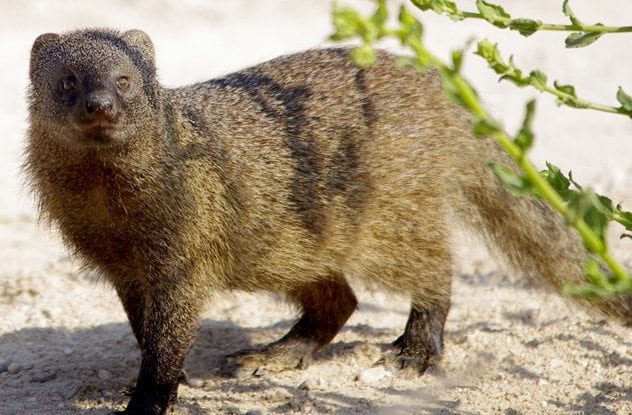 To the Egyptians, those furry little critters we call mongooses were among the most sacred of all animals. They had seen mongooses kill cobras, and they were impressed. They made bronze statues in honor of mongooses and wore mongoose amulets for protection.

People kept mongooses as pets, too. Some Egyptians have been found buried with the mummified remains of their pet mongoose. They even worked them into their mythology. The god Ra, according to one of their stories, would transform into a mongoose to fight evil.

The craziest story, though, was one they insisted really happened. The Egyptians claim that one legendary mongoose was spotted climbing into a sleeping crocodile’s open mouth. The little furry critter climbed into the reptile’s belly and then ate its way out.

6Killing A Cat Was Punishable By Death 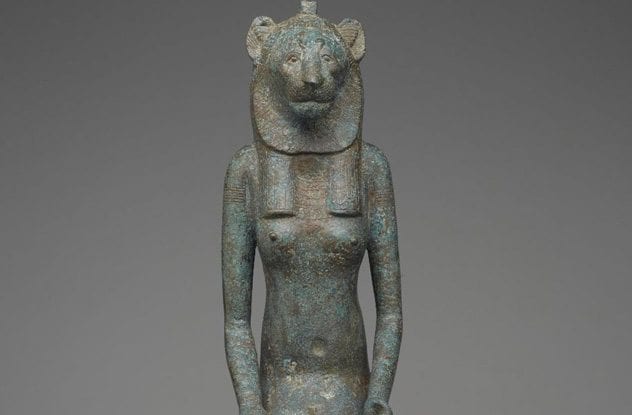 In Egypt, the penalty for killing a cat was death. This wasn’t just a law against cruelty to animals or sadistic cat-killings—all you had to do was accidentally run over a cat with your chariot and you’d be put to death.

There were no exceptions. One writer, Diodorus Siculus, recorded that the king of Egypt personally intervened to try to save a Roman man who accidentally killed a cat. His people, though, showed no mercy, even if it meant risking war with Rome. They formed a mob, lynched him, and left his dead body in the streets.

Their love of cats would create a catastrophe when, in 525 BC, they were invaded by Persia. The Persians painted the image of an Egyptian cat goddess on their shields and marched behind a line of dogs, sheep, cats and, in their words, “whatever other animals the Egyptians hold dear.”

The Egyptians were so afraid of accidentally hurting the cats that they surrendered to keep the cats safe. It didn’t do the animals much good. After winning the war, the king of Persia reportedly went around Egypt throwing cats in people’s faces.

5When A Cat Died, Families Went Into Mourning 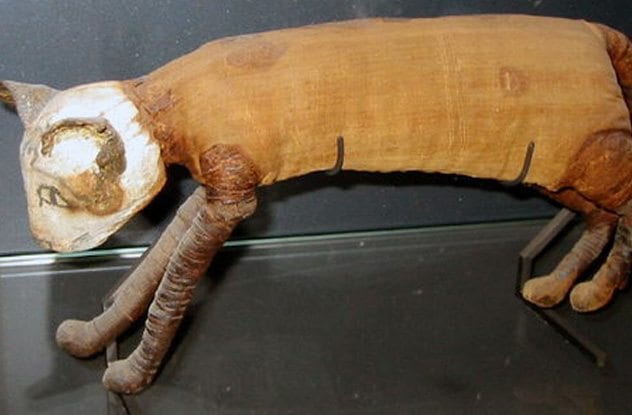 The death of cat was a tragedy. Losing your pet cat was treated more or less like losing your wife. The whole family would go into mourning, which, in Egypt, meant they had to shave their eyebrows off.

The dead cat’s body would be wrapped in fine linens and taken to be embalmed. There, its little body would be treated with cedar oil and spices to give a sweet smell. Then it would be mummified and buried in a catacomb along with a supply of milk, mice, and rats for the afterlife.

These cat tombs were massive. In one, 80,000 dead cats were found, every one carefully embalmed and cared for before being buried in its tomb.

4They Hunted With Trained Cheetahs 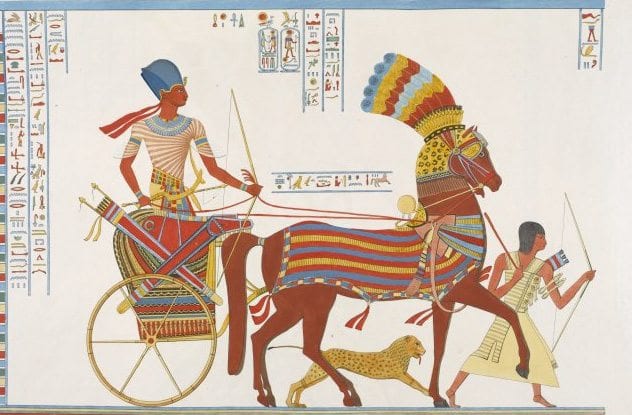 Big cats, like lions, could be hunted—but the Egyptian definition of “big” was a bit different from ours. By Egyptian standards, a cheetah was considered a “smaller cat”—something harmless enough to keep around the home.

While the average Egyptian home probably wouldn’t have a pet cheetah, some of the pharaohs did. Ramses II, in particular, filled his palace with tamed lions and cheetahs. And he wasn’t the only one to keep cheetahs around. Ancient tomb paintings show Egyptian kings going out hunting with a tamed cheetah at their side.

3They Had A City For Sacred Crocodiles 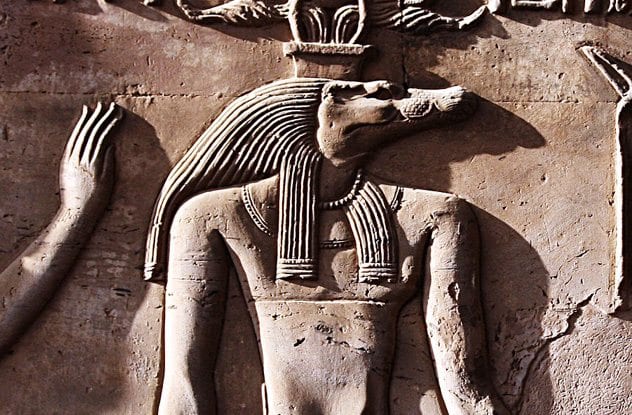 The Egyptian city Crocodilopolis was the religious center of an entire cult dedicated to a crocodile god named Sobek. Here, they kept a sacred crocodile, which they named Suchus. People from all over would come to make pilgrimages to see it.

The crocodile was covered in gold and jewelry, and he had a group of priests attending to him at all times. People would bring gifts of food for the crocodile, and these priests would pry open its mouth and force the crocodile to eat it. They’d even get it drunk. One priest would have to hold open the crocodile’s mouth while the other poured in wine.

When the crocodile died, it received a hero’s funeral. Its body would be wrapped up in fine linen bandages, and it was mummified, buried in the catacombs below. Then they’d pick a new crocodile to wear jewels and drink wine.

2They Thought Scarabs Were Magically Born In Dung 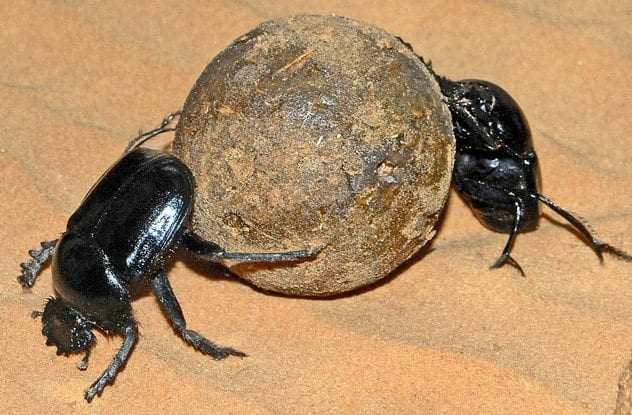 You’ve probably seen pictures of Egyptians wearing those little scarab amulets. Those things were real, and they were just as widespread as they are in the movies. Everyone, from the rich to the poor, wore them. The Egyptians believed that scarabs had magic power. Movies, though, usually leave why they thought they were magic.

Scarab beetles like to roll balls of dung on the ground and bury them in burrows. The females then lay their eggs in the dung, and their young come out of it. Egyptians saw most of that process happen, but they missed the egg-laying part. They figured that scarabs didn’t have mothers at all. Scarabs, they believed, just magically emerged out of poop.

They even believed that the Sun was just a big version of those balls being pushed by a gigantic scarab god. Don’t read too deep into that, though. That doesn’t mean they thought the Sun was a big ball of scarab dung. They couldn’t have—they didn’t even realize that they were balls of dung.

It’s much grosser than that. They thought the beetles were rolling balls of their own sperm.

1Two Pharaohs Went To War Over A Pet Hippo 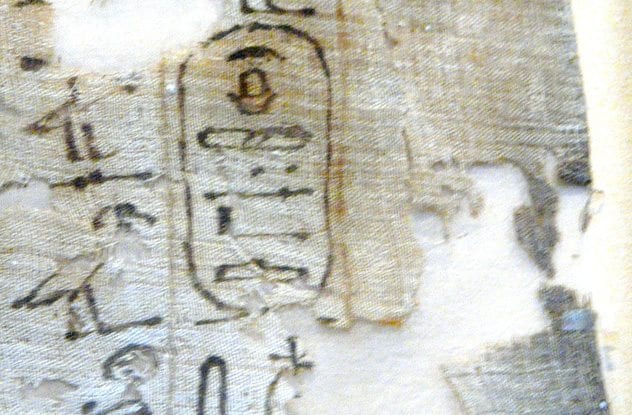 One of Egypt’s greatest wars was over the pharaoh’s pet hippos. Pharaoh Seqenenre Tao II kept a pool full of pet hippopotamuses, where he’d let his massive pets splash and play. This man loved his hippos. He was willing to die for them—in fact, he literally did just that.

At this time, Egypt was divided. The most powerful Egyptian kingdom was called Hyksos, which was ruled by Pharaoh Apopi. Being a lesser king, Seqenenre was required to pay tributes to Apopi. He could handle the humiliation of living under the tyranny of another man—until Apopi told him to get rid of his hippos.

Apopi sent a message to Seqenenre saying that his hippos were so loud he couldn’t sleep. Apopi lived 750 kilometers away, so this was just him being a jerk. Seqenenre, though, would not tolerate insults to his hippos. This, he declared, was grounds for war.

Seqenenre led his military into war against Apopi. He even died in combat, fighting for his right to a hippo pool. The war didn’t end there, though. His son kept it going. Two generations of kings fought for that hippo pool—and, in time, they won. By the end of the war, Egypt had unified once more, all because of one man’s love for his hippos.