When you think of Santa Claus, what comes to mind? Perhaps the image of a large, jolly man with rosy red cheeks and a white beard adorned in a red suit, cap, and black boots.

This fictional figure is one of the most famous symbols of Christmas, especially for children. They believe he is watching their behavior all year. They leave out milk and cookies for him on Christmas Eve in hopes that once he has completed his visit, everything they have asked for will be wrapped and waiting under the tree for them come Christmas morning.

While children are led to believe that they must stay off the naughty list to ensure they receive presents during the Christmas season, what happens when Old Saint Nick himself veers off course and finds himself on the wrong side of Christmas?

Let’s find out as we read these 10 stories about Saint Nick ending up on the naughty list.

10 It’s Better to Give Than to Receive?

You’ll Never Guess Where These Bank Robbers Used To Work

Sixty-three-year-old Mark London of Port Orange, Florida, had been the president of a national real estate company, making over $500k a year. However, when London was laid off from his executive position in 2013, he decided to make a bold career move and rob a bank disguised as Santa Claus.

On December 23, 2013, London entered the SunTrust Bank dressed in a Santa suit and carrying a gift bag. London pulled a gift box from his bag and handed it to the teller along with a note that read, “This is a hold-up! This is not a joke. There is a live radio-controlled bomb in the box. It can blow this bank to dust.”

The teller complied with London’s demands, and he left the bank with over $8,000 in cash but left his “gift” behind. The bank was later evacuated in order for police to investigate the “gift,” but it was determined the device was not explosive.

London was arrested on December 27, 2013, and charged with robbery and displaying a fake bomb during a felony. He was sentenced to eight years in prison.[1] 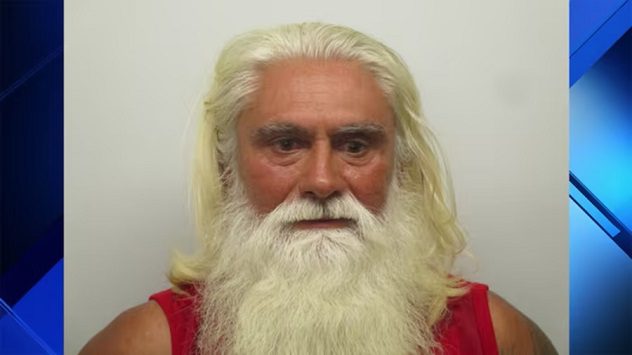 While 58-year-old Fidel Gonzalez Gutierrez of Marathon, Florida, was a fisherman by trade, he also could certainly be Santa Claus’s doppelganger. However, unlike Old Saint Nick, Gutierrez decided to spread cheer in an illegal fashion.

Between late February and early March of 2017, Gutierrez had sold cocaine to undercover officers on six different instances.

Gutierrez was arrested on March 28, 2017, and was charged with six counts of selling cocaine within 1,000 feet of a school or place of worship and four counts of using a two-way communication device to commit a felony.[2] 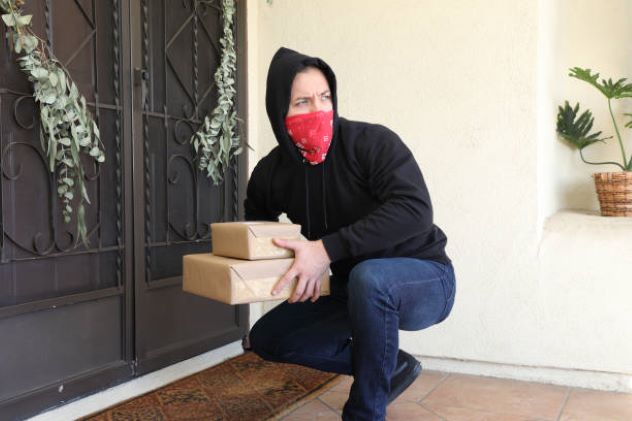 In December 2015, 26-year-old Cody J. Alexander of Coffeen, Illinois, was employed by a contracting company used by the postal service to deliver holiday packages. However, instead of getting in touch with his inner Santa Claus, Alexander took on a Grinch-like persona.

Rather than delivering the packages, Alexander took the packages, opened them, and then sold or pawned anything of value. Alexander was later apprehended but failed to show up for court on December 15, 2016.

However, just a few days later, on December 19, 2016, as Alexander was playing Santa Claus for a Christmas event in Waterloo, Illinois, he was arrested.

On March 17, 2017, Alexander was sentenced to 10 months in federal prison which would be followed by three months of home detention and three years of supervised release. He was also ordered to pay restitution for the mail and packages he stole.[3] On July 4, 2017, 54-year-old Christos Kassaras of Goffstown, New Hampshire, led police on a 50-mile (80-kilometer) chase. Kassaras was driving a stolen Jeep, but when officers attempted to pull him over for a traffic violation, he refused to stop.

The chase between Kassaras and Maine State Police reached speeds of 112 mph (180 km/h). Even after spike strips were deployed, Kassaras drove on busted tires for another 15 miles (24 kilometers) before he was finally apprehended.

Upon arrest, Kassaras identified himself as Santa Claus. While “Santa” claimed the police chase was due to mental illness, he was charged with eluding an officer, criminal speed, driving to endanger, unauthorized use of property, refusing to submit to arrest, and passing a roadblock.[4]

6 Down to the Station for Old Saint Nick 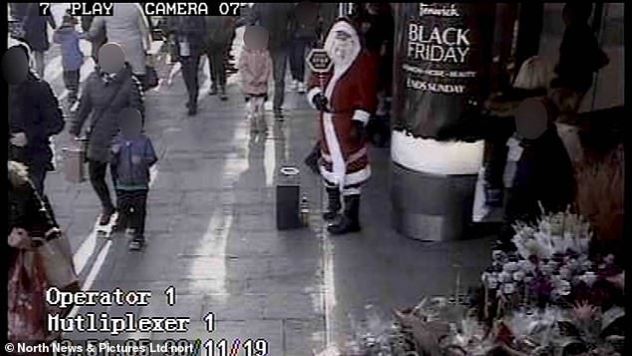 On November 30, 2019, 40-year-old Stephen Brown of Newcastle, England, stood outside a department store, dressed as Santa Claus and offering to pose for photographs with children in exchange for a donation. While that may not seem out of the ordinary given the upcoming holiday season, in Brown’s case, his actions were, in fact, illegal.

When department store security became concerned about Brown, they contacted the police. It was then discovered that Brown had previously been arrested in 2012 and was a registered sex offender.

Brown was subject to a lifetime Sexual Offences Prevention Order, which forbids any contact with children without the consent of a parent or guardian, who must also be aware of his previous convictions.

Thanks to the quick-thinking security guards, Brown was quickly arrested. On December 2, 2019, he was sentenced to six weeks in jail.[5] 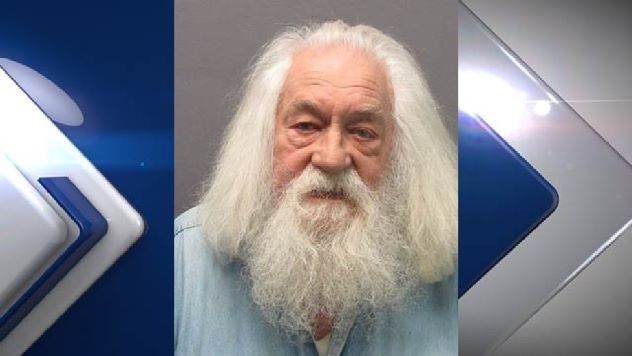 Eighty-three-year-old Virgil Almeida of Pawtucket, Rhode Island, legally changed his name to Santa Claus Almeida. While Almeida was a former Marine, donated to those in need, and had been impersonating Santa Claus for decades, his reputation as jolly Saint Nick quickly tarnished after a domestic dispute with his wife.

On February 19, 2015, Almeida’s 68-year-old wife was taken to the police department by a family member. She informed officers that Almeida had struck her several times while yelling and cursing at her before then placing his arm across her neck.

Thankfully, Almeida’s wife did not suffer any serious medical injuries. However, Almeida was arrested and charged with domestic assault by strangulation and domestic disorderly conduct.[6] 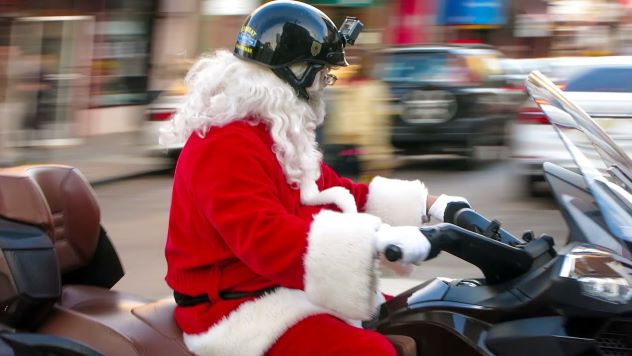 After 55-year-old John Michael Barton of Leesville, South Carolina, lost his wife, working with children became his passion. He would dress up as Santa Claus during the Christmas season, pose for photographs, and even give rides to children on his motorcycle. However, his intentions of spreading holiday cheer were taken a bit too far on December 17, 2006.

Tripp Morris of Augusta and his three daughters stopped at a local convenience store where Barton, dressed in his Santa suit, was putting gas in his motorcycle. Barton greeted the children with a “Ho-Ho-Ho!” and then asked if they wanted to see the stuffed Rudolph he had in his sidecar. However, when Barton started up his motorcycle and proceeded to leave the gas station, he drove away with an additional passenger—Morris’s eight-year-old daughter.

In a desperate attempt to get his daughter back, Morris got in his car and began chasing Barton, driving 80 mph (128 km/h) and flashing his lights until finally, Barton pulled over in a church parking lot where Morris was able to retrieve his daughter. Thankfully, the little girl was unharmed.

Barton was found hiding later that evening in a utility room at a local bar where he had been drinking. His Santa hat, wine glass, and motorcycle were all confiscated by police, and he was arrested.

Barton was charged with kidnapping and was ordered to have no unsupervised contact with children or the victim’s family.[7] 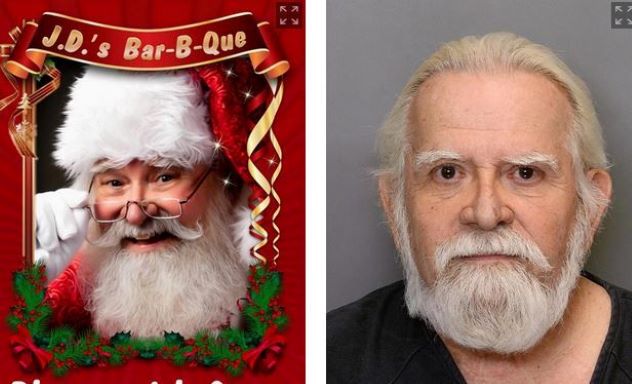 From 2007 to 2009, 70-year-old Ronald Joseph Papaleoni of Acworth, Georgia, was the manager of Premier Management. This company handled funds for the Lake Allatoona Preservation Authority—a local government water protection agency.

Papaleoni also owned a nonprofit organization called the Joy Foundation. Papaleoni would dress up as Santa Claus when his organization held annual shopping events for underprivileged children, such as “Shop with a Cop.”

In 2010, an audit of the water protection agency revealed that rather than using his position for good, Papaleoni wrote more than $50k in unauthorized checks to himself, his wife and son, and the nonprofit he owned. He then used those funds to pay for things such as his federal tax bill, telephone bills, and church offerings.

On August 13, 2014, Papleoni pleaded guilty to five counts of theft, including charges of theft by a fiduciary and theft by a government employee. He was sentenced to 15 years of probation, and a separate hearing was ordered to determine the amount of restitution Papaleoni would owe. While Papleoni hoped to use his gig as Santa Claus as a way to earn the restitution, he was unable to do so with a felony conviction.[8]

2 Father Christmas Under the Influence

On January 21, 2016, a 67-year-old Washington man, legally named Santa Claus, was spotted in Post Falls, Idaho driving his “sleigh” the wrong way down the street.

When police pulled Santa over, he claimed that his error was because he was not from the area. However, his “mistake” aside, officers could smell alcohol coming from his vehicle. Santa admitted to having a few beers and was unable to maintain his balance during a field sobriety test conducted by officers.

Mr. Claus was arrested and charged with DUI. However, his charge was later reduced to reckless driving. Claus pleaded guilty and paid a $700 fine.[9]

1 Santa Involved in a Troublesome Trio 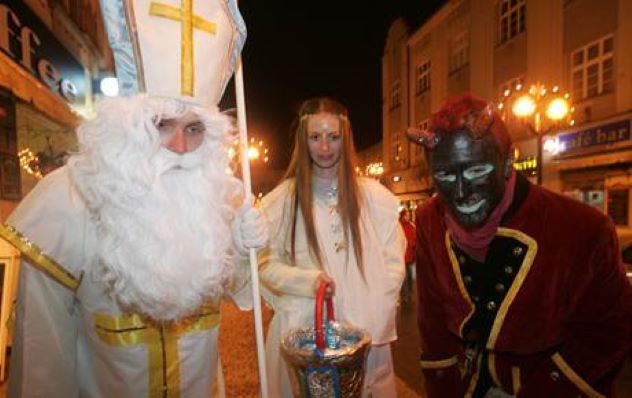 On December 7, 2016, a man dressed as Santa Claus was accompanied by his two sisters—one dressed as an angel and the other as a devil—along with his three-year-old son as they ventured through the town of Skalica, Slovakia.

This troublesome trio went through a neighborhood pretending to be well-wishers. When they rang the doorbell of a 91-year-old woman, she was kind enough to give them $5.29 (€5), but they were not satisfied with the woman’s offering.

The Santa Claus imposter then asked the woman for a cup of tea to give to his son. The woman obliged, but as she was busy making the tea, his “angel” sister stole jewelry and $47.62 (€45) from the elderly woman’s home.

Thankfully during this time, a neighbor stopped by and, sensing that something was “off” with the visitors, called the police. All three were arrested.[10]