Most religions have one or two unusual practices or devices but occasionally you find one which is just completely weird. This list contains ten of the more unusual things found in modern religions. 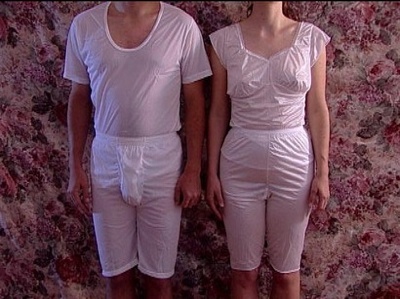 In some denominations of the Latter Day Saint movement, the temple garment (or the Garment of the Holy Priesthood, or informally, the garment or garments) is a set of sacred underclothing worn by adult adherents who have taken part in a ritual ceremony known as washing and anointing ordinance, usually in a temple as part of the Endowment ceremony. Adherents consider them to be sacred and may be offended by public discussion of the garments. Anti-Mormon activists have publicly displayed or defaced temple garments to show their opposition to the LDS Church.

According to generally-accepted Mormon doctrine, the marks in the garments are sacred symbols (Buerger 2002, p. 58). One proposed element of the symbolism, according to early Mormon leaders, was a link to the “Compass and the Square”, the symbols of freemasonry (Morgan 1827, pp. 22-23), to which Joseph Smith (creator of Mormonism) had been initiated about seven weeks prior to his introduction of the Endowment ceremony.

Discover more strange religious traditions with American Religious Traditions: The Shaping of Religion in the United States at Amazon.com! 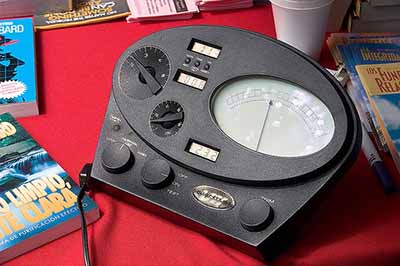 E-meter sessions are conducted by church employees known as auditors. Scientology materials traditionally refer to the subject as the “preclear,” although auditors continue to use the meter well beyond the clear level. The preclear holds a pair of cylindrical electrodes (“cans”) connected to the meter while the auditor asks the preclear a series of questions and notes both the verbal response and the activity of the meter. Auditor training describes many types of needle movements, with each having their own special significance.

A 1971 ruling of the United States District Court, District of Columbia (333 F. Supp. 357), specifically stated, “The E-meter has no proven usefulness in the diagnosis, treatment or prevention of any disease, nor is it medically or scientifically capable of improving any bodily function.” 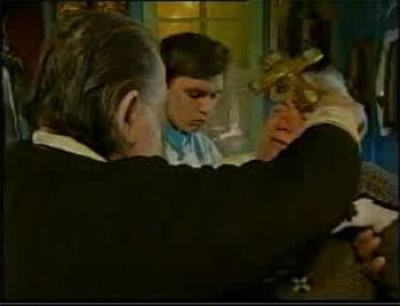 Exorcism is the practice of evicting demons or other evil spiritual entities from a person or place which they are believed to have possessed (taken control of). The practice is quite ancient and still part of the belief system of many religions, though it is seen mostly in the Roman Catholic and Eastern Orthodox Churches.

Solemn exorcisms, according to the Canon law of the church, can only be exercised by an ordained priest (or higher prelate), with the express permission of the local bishop, and only after a careful medical examination to exclude the possibility of mental illness. The Catholic Encyclopaedia (1908) enjoined: “Superstition ought not to be confounded with religion, however much their history may be interwoven, nor magic, however white it may be, with a legitimate religious rite”.

To listen to two authentic recordings of exorcisms, visit the Top 10 Incredible Recordings. For more audio, video, and images of excorcisms, you can go here. 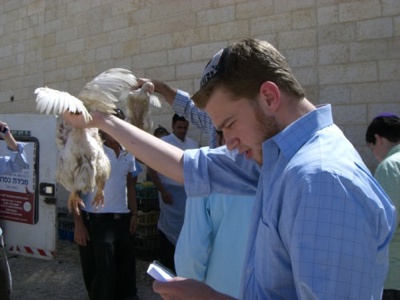 Kaparot is a traditional Jewish religious ritual that takes place around the time of the High Holidays. Classically, it is performed by grasping a live chicken by the sholder blades and moving around one’s head three times, symbolically transferring one’s sins to the chicken. The chicken is then slaughtered and donated to the poor, preferably eaten at the pre-Yom Kippur feast. In modern times, Kapparos is performed in the traditional form mostly in Haredi communities. The ritual is preceded by the reading of Psalms 107:17-20 and Job 33:23-24.

On the eve of Yom Kippur 2005, more than 200 caged chickens were abandoned in rainy weather as part of a Kaparot operation in Brooklyn, NY; some of these starving and dehydrated chickens were subsequently rescued by the American Society for the Prevention of Cruelty to Animals. Jacob Kalish, an Orthodox Jew from Williamsburg, was charged with animal cruelty for the drowning deaths of 35 of these chickens. In response to such reports of the mistreatment of chickens, animal rights organizations have begun to picket public observances of kaparot, particularly in Israel. 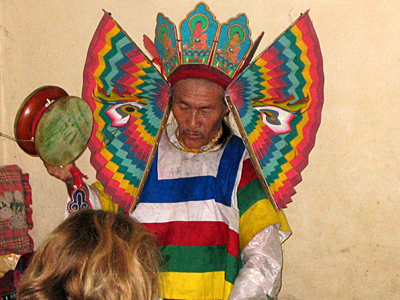 Shamanism refers to a range of traditional beliefs and practices concerned with communication with the spirit world. There are many variations in shamanism throughout the world, though there are some beliefs that are shared by all forms of shamanism. Its practitioners claim the ability to diagnose and cure human suffering and, in some societies, the ability to cause suffering. This is believed to be accomplished by traversing the axis mundi and forming a special relationship with, or gaining control over, spirits.

Shamans have been credited with the ability to control the weather, divination, the interpretation of dreams, astral projection, and traveling to upper and lower worlds. Shamans were used in Tibetan Buddhism as a form of divination by which the Dalai Lama was given prophesies of the future and advice.

Shamanism isn’t dead! Make your own shamanistic instruments with A Spirit Walker’s Guide to Shamanic Tools at Amazon.com! 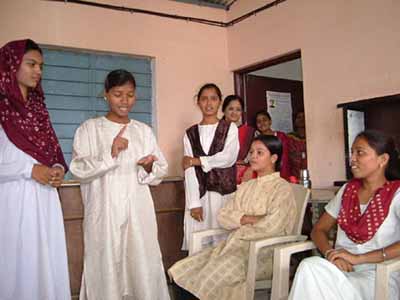 This is a cultural practice rather than a religious one. The practice of dowry exists across India. Despite laws against it, the practice continues. The girl child’s dowry and wedding expenses often sends her family into a huge debt trap. As consumerism and wealth increase in India, dowry demands are growing. In rural areas, families sell their land holdings, while the urban poor sell their houses.

To curb the practice of dowry, the government of India made several laws detailing severe punishment to anyone demanding dowry and a law in Indian Penal Code (Section 498A) has been introduced. While it gives boost to a woman and her family, it in the same time also put a man and his family in a great disadvantage. Misuse of this law by women in urban India and many incidents of extortion of money from the husband done by the wife and her family (this is called sowry) have come to light.

4Mormon Baptism of the Dead 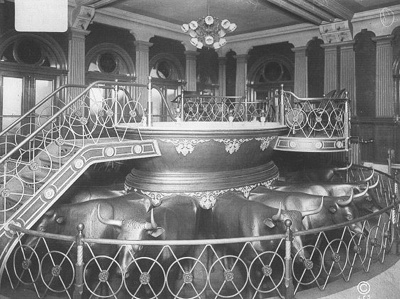 Baptism for the dead, vicarious baptism or proxy baptism is a religious practice of baptising a living person on behalf of an individual who is dead; the living person is acting as the deceased person’s proxy. It has been practiced since 1840 in The Church of Jesus Christ of Latter-day Saints where it is also called temple baptism because it is performed only in dedicated temples.

In the practice of The Church of Jesus Christ of Latter-day Saints, a living person, acting as proxy, is baptized by immersion on behalf of a deceased person of the same gender. The baptism ritual is as follows: after calling the living proxy by name, the person performing the baptism says, “Having been commissioned of Jesus Christ, I baptize you for and in behalf of [full name of deceased person], who is dead, in the name of the Father, and of the Son, and of the Holy Ghost. Amen.” The proxy is then immersed briefly in the water. Baptism for the dead is a distinctive ordinance of the church and is based on the belief that baptism is a required ordinance for entry into the Kingdom of God.

The Church of Jesus Christ of Latter-day Saints vicariously baptizes people regardless of race, sex, or creed. This includes both victims and perpetrators of genocide. Some Jewish survivors of the Holocaust and their supporters have objected to this practice. 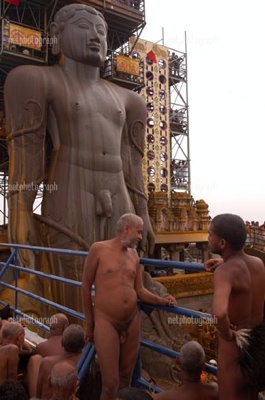 Digambar also spelled Digambara is one of the two main sects of Jainism. Senior Digambar monks wear no clothes, following the practice of Lord Mahavira. They do not consider themselves to be nude — they are wearing the environment. Digambaras believe that this practice represents a refusal to give in to the body’s demands for comfort and private property — only Digambara ascetics are required to forsake clothing. Digambara ascetics have only two possessions: a peacock feather broom and a water gourd. 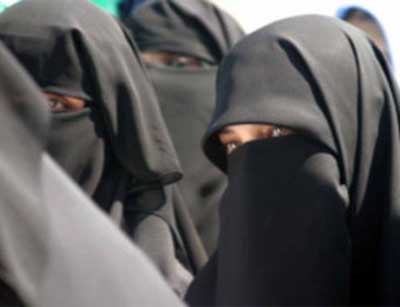 A niqab is a veil which covers the face, worn by some Muslim women as a part of sartorial hijab. It is popular in the Arab countries of the Persian Gulf but it can also be found in North Africa, Southeast Asia and the Indian subcontinent.

The niqab is regarded differently by the various schools of Islamic jurisprudence known as madhahab. Some see it as obligatory, or fard , while others see it as recommended, or mustahab, and a few see it as forbidden. The majority of scholars believe hijab is required, but only a few see niqab as required, although this is not the common perception among the general population. 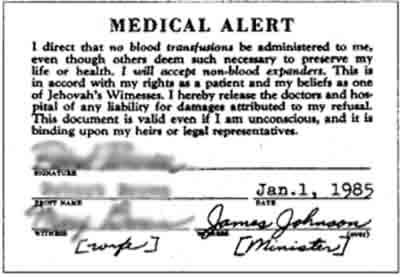 A fundamental doctrine of the Jehovah’s Witnesses teaches that the Bible prohibits consumption, storage and transfusion of blood, including in cases of emergency. This doctrine was introduced in 1945, and has been elaborated upon since then. Although accepted by a majority of Jehovah’s Witnesses, evidence indicates a minority does not wholly endorse this doctrine. Facets of the doctrine have drawn praise and criticism from both members of the medical community and Jehovah’s Witnesses alike.