The 43rd president of the United States, George W. Bush makes the news headlines every day for his policies, strategies and proposals. He also makes the headlines for some comments that cause his fellow Republicans to cringe and Democrats to smile. Here are his top ten flubs from the past few years. (Note: this is a politically unbiased site, the top 10 unfortunate comments of the Clintons is coming next). 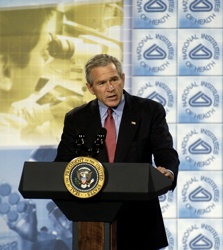 comments made during his address on Project Safe Neighborhoods Initiative at the Pennsylvania Convention Center (Philadelphia, PA), May 14, 2001

Make your next outing a memorable occasion with a Disguise Bush Jr Mask at Amazon.com!

said during an informal meeting with journalists in Rome, Italy, July 22, 2001

I promise you I will listen to what has been said here, even though I wasn’t here. 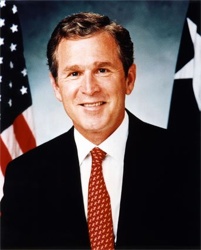 If affirmative action means what I just described, what I’m for, then I’m for it.

remarked during a presidential debate in St. Louis, MO, October 18, 2000

I’m also not very analytical. You know I don’t spend a lot of time thinking about myself, about why I do things.

commented while meeting with journalists aboard Air Force One, June 4, 2003

Show your affection with a George W. Bush Miss Me Yet Mens T-Shirt at Amazon.com!

Our enemies are innovative and resourceful, and so are we. They never stop thinking about new ways to harm our country and our people and neither do we.

Rarely is the question asked: Is our children learning?

said at a presidential campaign stop in Florence, SC, January 11, 2000 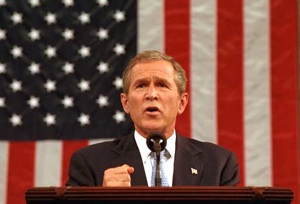 The important question is, how many hands have I shaked.

in response to a question about why he hadn’t spent more time in New Hampshire during the presidential campaign, Oct. 22, 1999