Prince Philip is married to Queen Elizabeth II of England, making him the Duke of Edinburgh. He is quite famous in Britain for making some rather embarrassing, though often funny, comments. This is a list of fifteen of the best. 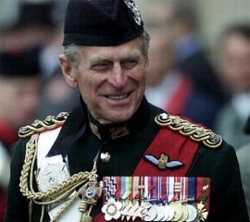 If you stay here much longer, you’ll all be slitty-eyed.

Learn all about the self-confident, opinionated man with Prince Philip: The Turbulent Early Life of the Man Who Married Queen Elizabeth II at Amazon.com!

2. To a blind women with a guide

“Do you know they have eating dogs for the anorexic now?”

3. To an Aborigine in Australia

“Do you still throw spears at each other?”

4. To his wife, the Queen, after her coronation

“Where did you get the hat?” 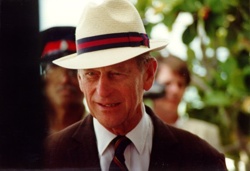 5. When asked if he would like to visit the Soviet Union

“The bastards murdered half my family”

6. To a Briton in Budapest

“You can’t have been here that long – you haven’t got a pot belly.”

7. To a driving instructor in Scotland

“How do you keep the natives off the booze long enough to get them through the test?”

8. After the Dunblane shooting

“If a cricketer, for instance, suddenly decided to go into a school and batter a lot of people to death with a cricket bat, which he could do very easily, I mean, are you going to ban cricket bats?”

9. To a student who had been trekking in Papua New Guinea

“You managed not to get eaten, then?”

10. To Elton John after hearing Elton had sold his Gold Aston Martin

“Oh, it’s you that owns that ghastly car – we often see it when driving to Windsor Castle.”

11. On the London Traffic Debate

12. To the President of Nigeria, dressed in traditional robes

“If you see a man opening a car door for a woman, it means one of two things: it’s either a new woman or a new car!”

15. To the matron of a hospital in the Caribbean

“You have mosquitos. I have the Press”