Since Halloween isn’t too far off and I know I enjoy watching cheesy horror films, I thought I would share this list of the top 5 reasons that we all love them. No matter how bad they are, they will usually bring a smile to our faces. Here are just some of the reasons why they are so amazingly bad, and yet, entertaining. 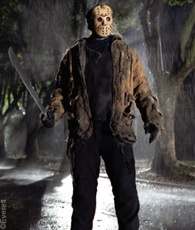 “Maybe we should split up!?!?” The character’s have a complete lack of common sense. Maybe it’s just me, but why would you ever split up when you are walking through a forest in pitch black, surrounded by obvious signs that you are being followed or watched. We all know what the fate is of any person that leaves the group. You can see this cliche in films like The Hills have Eyes.

If you like horror, you’ll love the 1977 original The Hills Have Eyes at Amazon.com!

“The door is stuck!” The escape door is always stuck. It worked just a few minutes earlier when the boyfriend left the bedroom, but when the female has to get away from the villain, it is stuck. This has to be one of the biggest cliches in the horror genre.

“Bad Time For A Breakdown.” Just like the door, the car never seems to work when it needs to. You turn the key but it just won’t go until the last second. This can be experienced in its full glory in The Texas Chainsaw Massacre, which is, otherwise, an excellent film.

“Aren’t You Supposed To Be Dead?” You just have to love the fact that the killer never dies. Poor Jason has been drowned, blown up, and chopped up. Nothing stops these guys… but then again, if they died we wouldn’t have the wonderfully bad sequels to keep us coming back for more.

Obviously these reasons don’t apply to all horror films and congratulations to the original ones that don’t have to rely on cliches. As usual, if you can think of any items that you think should be on the list, add them to the comments!