The middle ages (5th – 15th Centuries AD), often termed The Dark Ages, were actually a time of great discovery and invention. The Middle ages also saw major advances in technologies that already existed, and the adoption of many Eastern technologies in the West. This is a list of the ten greatest inventions of the Middle Ages (excluding military inventions). 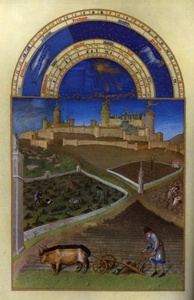 In the basic mouldboard plough the depth of the cut is adjusted by lifting against the runner in the furrow, which limited the weight of the plough to what the ploughman could easily lift. These ploughs were fairly fragile, and were unsuitable for breaking up the heavier soils of northern Europe. The introduction of wheels to replace the runner allowed the weight of the plough to increase, and in turn allowed the use of a much larger mouldboard that was faced with metal. These heavy ploughs led to greater food production and eventually a significant population increase around 600 AD. 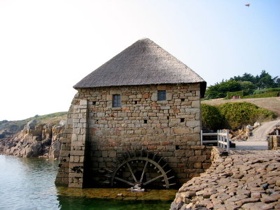 A tide mill is a specialist type of water mill driven by tidal rise and fall. A dam with a sluice is created across a suitable tidal inlet, or a section of river estuary is made into a reservoir. As the tide comes in, it enters the mill pond through a one way gate, and this gate closes automatically when the tide begins to fall. When the tide is low enough, the stored water can be released to turn a water wheel. The earliest excavated tide mill, dating from 787, is the Nendrum Monastery mill on an island in Strangford Lough in Northern Ireland. Its millstones are 830mm in diameter and the horizontal wheel is estimated to have developed 7/8HP at its peak. Remains of an earlier mill dated at 619 were also found. 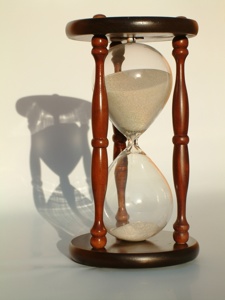 Since the hourglass was one of the few reliable methods of measuring time at sea, it has been speculated that it was in use as far back as the 11th century, where it would have complemented the magnetic compass as an aid to navigation. However, it is not until the 14th century that evidence of their existence was found, appearing in a painting by Ambrogio Lorenzetti 1328. The earliest written records come from the same period and appear in lists of ships stores. From the 15th century onwards they were being used in a wide range of applications at sea, in the church, in industry and in cookery. They were the first dependable, reusable and reasonably accurate measure of time. During the voyage of Ferdinand Magellan around the globe, his vessels kept 18 hourglasses per ship. It was the job of a ship’s page to turn the hourglasses and thus provide the times for the ship’s log. Noon was the reference time for navigation, which did not depend on the glass, as the sun would be at its zenith. 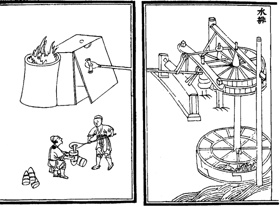 The oldest known blast furnaces in the West were built in Dürstel in Switzerland, the Märkische Sauerland in Germany, and Sweden at Lapphyttan where the complex was active between 1150 and 1350. At Noraskog in the Swedish county of Järnboås there have also been found traces of blast furnaces dated even earlier, possibly to around 1100. Knowledge of certain technological advances was transmitted as a result of the General Chapter of the Cistercian monks, including the blast furnace, as the Cistercians are known to have been skilled metallurgists. According to Jean Gimpel, their high level of industrial technology facilitated the diffusion of new techniques: “Every monastery had a model factory, often as large as the church and only several feet away, and waterpower drove the machinery of the various industries located on its floor.” Iron ore deposits were often donated to the monks along with forges to extract the iron, and within time surpluses were being offered for sale. The Cistercians became the leading iron producers in Champagne, France, from the mid-13th century to the 17th century, also using the phosphate-rich slag from their furnaces as an agricultural fertilizer. 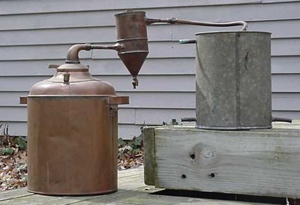 The first evidence of true distillation comes from Babylonia and dates from the fourth millennium BC. Specially shaped clay pots were used to extract small amounts of distilled alcohol through natural cooling for use in perfumes, however it is unlikely this device ever played a meaningful role in the history of the development of the still. Freeze distillation, the “Mongolian still”, are known to have been in use in Central Asia as early as the 7th century AD. The first method involves freezing the alcoholic beverage and removing water crystals. The development of the still with cooled collector—necessary for the efficient distillation of spirits without freezing—was an invention of Muslim alchemists in the 8th or 9th centuries. In particular, Geber (Jabir Ibn Hayyan, 721–815) invented the alembic still; he observed that heated wine from this still released a flammable vapor, which he described as “of little use, but of great importance to science” 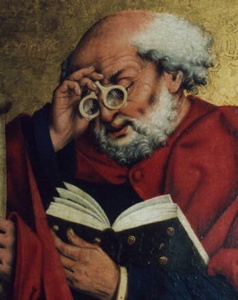 In 1268 Roger Bacon made the earliest recorded comment on the use of lenses for optical purposes, but magnifying lenses inserted in frames were used for reading both in Europe and China at this time, and it is a matter of controversy whether the West learned from the East or vice versa. In Europe eyeglasses first appeared in Italy, their introduction being attributed to Alessandro di Spina of Florence. The first portrait to show eyeglasses is that of Hugh of Provence by Tommaso da Modena, painted in 1352. In 1480 Domenico Ghirlandaio painted St. Jerome at a desk from which dangled eyeglasses; as a result, St. Jerome became the patron saint of the spectacle-makers’ guild. The earliest glasses had convex lenses to aid farsightedness. A concave lens for myopia, or nearsightedness, is first evident in the portrait of Pope Leo X painted by Raphael in 1517. 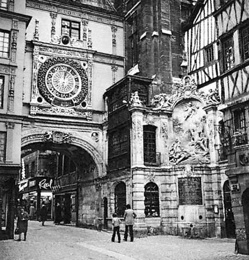 The origin of the all-mechanical escapement clock is unknown; the first such devices may have been invented and used in monasteries to toll a bell that called the monks to prayers. The first mechanical clocks to which clear references exist were large, weight-driven machines fitted into towers and known today as turret clocks. These early devices struck only the hours and did not have hands or a dial. The oldest surviving clock in England is that at Salisbury Cathedral, which dates from 1386. A clock erected at Rouen, France, in 1389 is still extant (photo above), and one built for Wells Cathedral in England is preserved in the Science Museum in London. 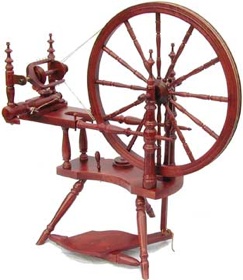 The spinning wheel was probably invented in India, though its origins are obscure. It reached Europe via the Middle East in the European Middle Ages. It replaced the earlier method of hand spinning, in which the individual fibres were drawn out of a mass of wool held on a stick, or distaff, twisted together to form a continuous strand, and wound on a second stick, or spindle. The first stage in mechanizing the process was to mount the spindle horizontally in bearings so that it could be rotated by a cord encircling a large, hand-driven wheel. The distaff, carrying the mass of fibre, was held in the left hand, and the wheel slowly turned with the right. Holding the fibre at an angle to the spindle produced the necessary twist. 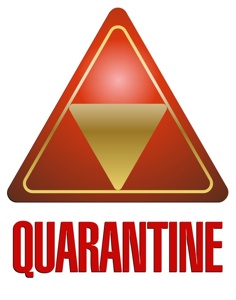 In the 14th century the growth of maritime trade and the recognition that plague was introduced by ships returning from the Levant led to the adoption of quarantine in Venice. It was decreed that ships were to be isolated for a limited period to allow for the manifestation of the disease and to dissipate the infection brought by persons and goods. Originally the period was 30 days, trentina, but this was later extended to 40 days, quarantina. The choice of this period is said to be based on the period that Christ and Moses spent in isolation in the desert. In 1423 Venice set up its first lazaretto, or quarantine station, on an island near the city. The Venetian system became the model for other European countries and the basis for widespread quarantine control for several centuries. 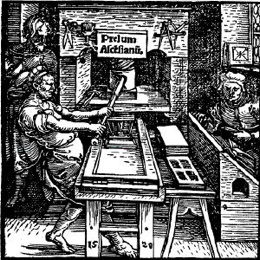 Although movable type, as well as paper, first appeared in China, it was in Europe that printing first became mechanized. The earliest mention of a printing press is in a lawsuit in Strasbourg in 1439 revealing construction of a press for Johannes Gutenberg and his associates. (Scant evidence exists to support claims of Laurens Janszoon Coster as the inventor of printing.) The invention of the printing press itself obviously owed much to the medieval paper press, in turn modeled after the ancient wine-and-olive press of the Mediterranean area. A long handle was used to turn a heavy wooden screw, exerting downward pressure against the paper, which was laid over the type mounted on a wooden platen. In its essentials, the wooden press reigned supreme for more than 300 years, with a hardly varying rate of 250 sheets per hour printed on one side.