Throughout history the world has been blessed with the occasional appearance of children with great talents, many of whom go on to become some of the most important contributors in their field. This is a list of the ten greatest child prodigies. As usual, add your own favorites to the comments. 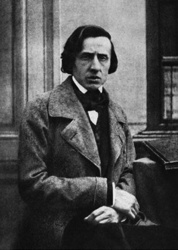 Chopin (March 1, 1810 – October 17, 1849) was born in the village of ?elazowa Wola, Duchy of Warsaw, to a Polish mother and French-expatriate father. Hailed in his homeland as a child prodigy, at age twenty Chopin left Poland forever. Young Chopin received his first piano lessons from his older sister Ludwika (Polish for “Louise”) and was subsequently taught by his mother. His musical talent was early apparent, and he gained a reputation in Warsaw as a “second Mozart.” At age seven he was already the author of two polonaises (G minor and B flat major), the first being published in the engraving workshop of Father Cybulski, director of a School of Organists and one of the few music publishers in Poland. The prodigy was featured in Warsaw newspapers, and “little Chopin” became an attraction in the capital’s aristocratic salons. He also began giving public charity concerts. He is said to once have been asked what he thought the audience liked best; the witty seven-year-old replied, “My shirt collar.” He first appeared publicly as a pianist when he was eight.

Get the soothing work of Chopin in a Gorgeous Light Brown Inlay Floral Musical Jewerly Box at Amazon.com! 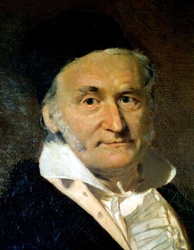 Gauss (30 April 1777 – 23 February 1855) was a child prodigy, of whom there are many anecdotes pertaining to his astounding precocity while a mere toddler, and made his first ground-breaking mathematical discoveries while still a teenager. He completed Disquisitiones Arithmeticae, his magnum opus, at the age of 21 (1798), though it would not be published until 1801. This work was fundamental in consolidating number theory as a discipline and has shaped the field to the present day. Sometimes known as “the prince of mathematicians” and “greatest mathematician since antiquity”, Gauss had a remarkable influence in many fields of mathematics and science and is ranked as one of history’s most influential mathematicians. 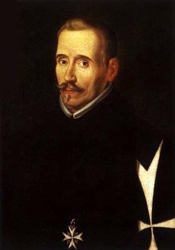 Lope de Vega (25 November 1562 – 27 August 1635) was a Spanish Baroque playwright and poet. His reputation in the world of Spanish letters is second only to that of Cervantes, while the sheer volume of his literary output is unequalled: he is estimated to have written between 1,500 and 2,500 fully-fledged plays – of which some 425 have survived until the modern day – together with a plethora of shorter dramatic and poetic works. The first indications of young Lope’s genius became apparent in his earliest years. At the age of five he was already reading Spanish and Latin, by his tenth birthday he was translating Latin verse, and he wrote his first play when he was 12. His fourteenth year found him enrolled in the Colegio Imperial, a Jesuit school in Madrid, from which he absconded to take part in a military expedition in Portugal. Lope introduced order into all the forms of national poetry, from the old romance couplets to the rarest lyrical combinations borrowed from Italy. He was thus justified in saying that those who should come after him had only to go on along the path which he had opened. 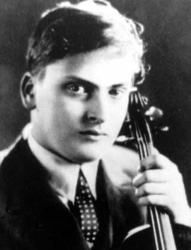 Yehudi Menuhin (April 22, 1916 – March 12, 1999) was born to Russian Jewish parents, Menuhin began violin instruction at age three under violinist Sigmund Anker. His first solo violin performance at age of seven was with the San Francisco Symphony in 1923. Menuhin later studied under the Romanian composer and violinist George Enescu, after which he made several recordings with his sister Hephzibah, who was a pianist. He was also a student of Louis Persinger and Adolf Busch. Yehudi Menuhin performed for allied soldiers during World War II, and went with the composer Benjamin Britten to perform for inmates of Bergen-Belsen concentration camp, after its liberation in April 1945. He returned to Germany in 1947 to perform under the baton of conductor Wilhelm Furtwängler as an act of reconciliation, becoming the first Jewish musician to do so following the Holocaust. 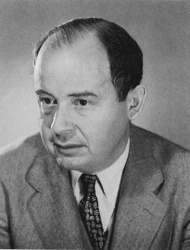 John von Neumann (December 28, 1903 – February 8, 1957) was an Austria-Hungary-born American mathematician who made contributions to quantum physics, functional analysis, set theory, topology, economics, computer science, numerical analysis, hydrodynamics (of explosions), statistics and many other mathematical fields as one of history’s outstanding mathematicians. His father was Neumann Miksa (Max Neumann), a lawyer who worked in a bank. His mother was Kann Margit (Margaret Kann). John was an extraordinary prodigy. At the age of only six, he was able to divide two 8-digit numbers in his head. He received his Ph.D. in mathematics (with minors in experimental physics and chemistry) from the University of Budapest at the age of 23.

Read some of his work in The Computer and the Brain: Second Edition (Mrs. Hepsa Ely Silliman Memorial Lectures) at Amazon.com! 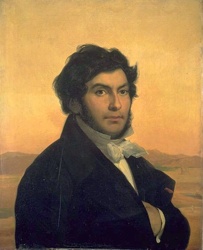 Champillon (23 December 1790 – 4 March 1832) was born at Figeac, Lot, in France, the last of seven children (two of whom had already died before he was born). He lived in Grenoble for several years, and even as a child showed an extraordinary linguistic talent. By the age of 16 he had mastered a dozen languages and had read a paper before the Grenoble Academy concerning the Coptic language. By 20 he could also speak Latin, Greek, Hebrew, Amharic, Sanskrit, Avestan, Pahlavi, Arabic, Syriac, Chaldean, Persian, Ethiopic, and Chinese in addition to his native French. He deciphered the Egyptian hieroglyphs with the help of groundwork laid by his predecessors: Silvestre de Sacy, Johan David Akerblad, Thomas Young, and William John Bankes. Champollion translated parts of the Rosetta Stone in 1822, showing that the written Egyptian language was similar to Coptic, and that the writing system was a combination of phonetic and ideographic signs. 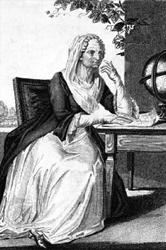 Maria Gaetana Agnesi (May 16, 1718 – January 9, 1799) was an Italian linguist, mathematician, and philosopher. Agnesi is credited with writing the first book discussing both differential and integral calculus. She was an honorary member of the faculty at the University of Bologna. Maria was recognized as a child prodigy very early; she could speak both French and Italian at five years of age. By her thirteenth birthday she had acquired Greek, Hebrew, Spanish, German, Latin, and probably a few more languages, as she was referred to as the “Walking Polyglot”. She even educated her younger brothers. When she was 9 years old, she composed and delivered an hour-long speech in Latin to an academic gathering. The subject was women’s right to be educated. A crater on Venus is named in her honor. 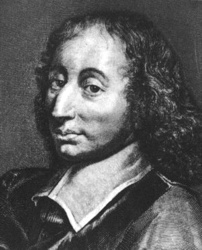 At 11 or 12, Pascal (June 19, 1623 – August 19, 1662) had secretly worked out the first twenty-three propositions of Euclid on his own. He was a child prodigy who was educated by his father. Pascal’s earliest work was in the natural and applied sciences where he made important contributions to the construction of mechanical calculators, the study of fluids, and clarified the concepts of pressure and vacuum by generalizing the work of Evangelista Torricelli. Pascal also wrote powerfully in defense of the scientific method. He was a mathematician of the first order. Pascal helped create two major new areas of research. He wrote a significant treatise on the subject of projective geometry at the age of sixteen and corresponded with Pierre de Fermat from 1654 and later on probability theory, strongly influencing the development of modern economics and social science. In honor of his scientific contributions, the name Pascal has been given to the SI unit of pressure, to a programming language, and Pascal’s law (an important principle of hydrostatics), and as mentioned above, Pascal’s triangle and Pascal’s wager still bear his name. 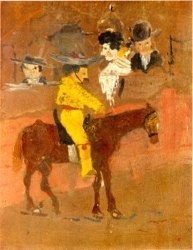 Picasso (October 25, 1881 – April 8, 1973) is one of the most recognized figures in 20th century art, he is best known as the co-founder, along with Georges Braque, of cubism. Picasso’s training under his father began before 1890. His progress can be traced in the collection of early works now held by the Museu Picasso in Barcelona, which provides one of the most comprehensive records extant of any major artist’s beginnings. During 1893 (12 years old) the juvenile quality of his earliest work falls away; by 1894 his career as a painter can be said to have begun. The academic realism apparent in the works of the mid-1890s is well displayed in The First Communion (1896), a large composition that depicts his sister, Lola. In the same year, at the age of 14, he painted Portrait of Aunt Pepa, a vigorous and dramatic portrait that Juan-Eduardo Cirlot has called “without a doubt one of the greatest in the whole history of Spanish painting.” The image above (Le picador) was painted by Picasso when he was only nine years old. 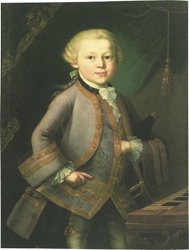 (January 27, 1756 – December 5, 1791) Mozart’s father Leopold Mozart (1719–1787) was deputy Kapellmeister to the court orchestra of the Archbishop of Salzburg, and a minor composer. He was also an experienced teacher; in the year of Mozart’s birth he published a successful violin textbook, Versuch einer gründlichen Violinschule. When Mozart’s sister Nannerl was seven, Leopold began giving her keyboard lessons. The three-year old Mozart looked on, evidently with fascination: his sister later recorded that at this age “he often spent much time at the clavier [keyboard], picking out thirds, … and his pleasure showed it sounded good [to him].” Nannerl continued: “in the fourth year of his age his father, for a game as it were, began to teach him a few minuets and pieces at the clavier. … he could play it faultlessly and with the greatest delicacy, and keeping exactly in time. … At the age of five he was already composing little pieces, which he played to his father who wrote them down.” Among them were the Andante (K. 1a) and Allegro in C (K. 1b). In the course of his lifetime, Mozart wrote over 600 compositions includes works widely acknowledged as pinnacles of symphonic, concertante, chamber, piano, operatic, and choral music. Mozart is among the most enduringly popular of classical composers and many of his works are part of the standard concert repertoire.