I wanted to make a list that tells us about the history of some of the things in life that we take for granted. We all know who invented things like the telephone and the television, but we don’t know when or how the staples of life were invented or discovered. So, here is a list of 10 things we take for granted and the history of their use. With the exception of one item (the wheel) the rest come to us from the Paleolithic era. This list is ordered from most recent to oldest.

The wheel probably originated in ancient Sumer (modern Iraq) in the 5th millennium BC, originally in the function of potter’s wheels. The wheel reached India and Pakistan with the Indus Valley Civilization in the 3rd millennium BCE. Near the northern side of the Caucasus several graves were found, in which since 3700 BC people had been buried on wagons or carts (both types). The earliest depiction of what may be a wheeled vehicle (here a wagon—four wheels, two axles), is on the Bronocice pot, a circa 3500 BC clay pot excavated in southern Poland. What is particularly interesting about the wheel, is that wheels only occur in nature in the microscopic form, so man’s use of the wheel could not have been in mimicry of nature. It is worth noting, however, that the rolling motion of the wheel is seen in certain animals that manipulate their bodies into the shape of a ball and roll. The wheel reached Europe and India (the Indus Valley civilization) in the 4th millennium BC. In China, the wheel is certainly present with the adoption of the chariot in ca. 1200 BC.

Learn all about ancient inventions in Blacks and Science Volume One: Ancient Egyptian Contributions to Science and Technology AND The Mysterious Sciences of the Great Pyramid at Amazon.com! 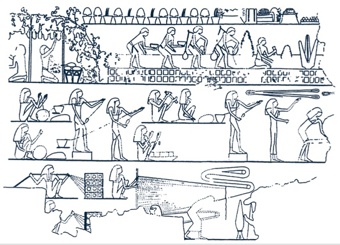 The use of ropes for hunting, pulling, fastening, attaching, carrying, lifting, and climbing dates back to prehistoric times and has always been essential to mankind’s technological progress. It is likely that the earliest “ropes” were naturally occurring lengths of plant fiber, such as vines, followed soon by the first attempts at twisting and braiding these strands together to form the first proper ropes in the modern sense of the word. Fossilised fragments of “probably two-ply laid rope of about 7 mm diameter” were found in Lascaux cave, dating to approximately 15,000 BC. The ancient Egyptians were probably the first civilization to develop special tools to make rope. Egyptian rope dates back to 4000 to 3500 B.C. and was generally made of water reed fibers. Other rope in antiquity was made from the fibers of date palms, flax, grass, papyrus, leather, or animal hair. 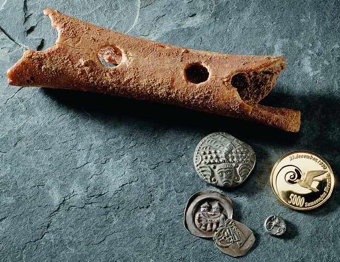 The first known music instruments were flutes. The flute appeared in different forms and locations around the world. A three-hole flute made from a mammoth tusk, (from the Geißenklösterle cave in the German Swabian Alb and dated to 30,000 to 37,000 years ago), and two flutes made from swans’ bones excavated a decade earlier (from the same cave in Germany, dated to circa 36,000 years ago) are among the oldest known musical instruments. The flute has been dated to prehistoric times. A fragment of the femur of a juvenile cave bear, with two to four holes, found at Divje Babe in Slovenia and dated to about 43,100 years ago, may also be an early flute. Some early flutes were made out of tibias (shin bones). Playable 9000-year-old Gudi (literally, “bone flute”), made from the wing bones of red-crowned cranes, with five to eight holes each, were excavated from a tomb in Jiahu in the Central Chinese province of Henan. 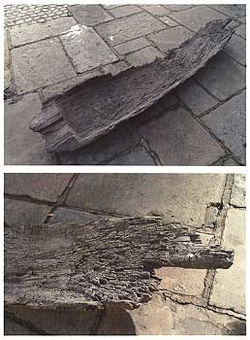 Archaeological evidence indicates that humans arrived on New Guinea at least 60,000 years ago, probably by sea from Southeast Asia during an ice age period when the sea was lower and distances between islands shorter. The ancestors of Australian Aborigines and New Guineans went across the Lombok Strait to Sahul by boat over 50,000 years ago. Evidence from ancient Egypt shows that the early Egyptians already knew how to assemble planks of wood into a watertight hull, using treenails to fasten them together, and pitch for caulking the seams. The “Khufu ship”, a 43.6 m long vessel sealed into a pit in the Giza pyramid complex at the foot of the Great Pyramid of Giza in the Fourth Dynasty around 2,500 BC, is a full-size surviving example which may have fulfilled the symbolic function of a solar barque. 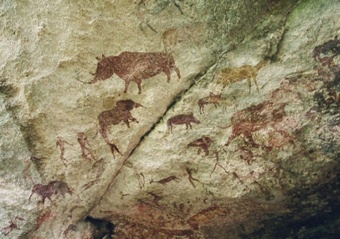 Naturally occurring pigments such as ochres and iron oxides have been used as colorants since prehistoric times. Archaeologists have uncovered evidence that early humans used paint for aesthetic purposes such as body decoration. Pigments and paint grinding equipment believed to be between 350,000 and 400,000 years old have been reported in a cave at Twin Rivers, near Lusaka, Zambia. Before the Industrial Revolution, the range of color available for art and decorative uses was technically limited. Most of the pigments in use were earth and mineral pigments, or pigments of biological origin. Pigments from unusual sources such as botanical materials, animal waste, insects, and mollusks were harvested and traded over long distances. Some colors were costly or impossible to mix with the range of pigments that were available. Blue and purple came to be associated with royalty because of their expense.

Wheels and clothes are okay, but food is where it’s at. Buy Sweet Invention: A History of Dessert at Amazon.com! 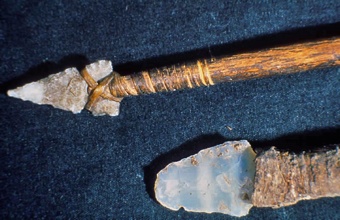 Spear manufacture and use is also practiced by the Pan troglodytes verus subspecies of the Common Chimpanzee. This is the only known example of animals besides humans crafting and using deadly weapons. Chimpanzees near Kédougou, Senegal were observed to create spears by breaking straight limbs off of trees, stripping them of their bark and side branches, and sharpening one end with their teeth. They then used the weapons to hunt galagos sleeping in hollows. Archeological evidence documents that wooden spears were used for hunting 400,000 years ago. However, wood does not preserve well. Craig Stanford, a primatologist and professor of anthropology at the University of Southern California, has suggested that the discovery of spear use by chimpanzees probably means that early humans used wooden spears as well, perhaps five million years ago. By 250,000 years ago wooden spears were made with fire-hardened points. From 280,000 years ago humans began to make complex stone blades, which were used as spear points. By 50,000 years ago there was a revolution in human culture, leading to more complex hunting techniques. 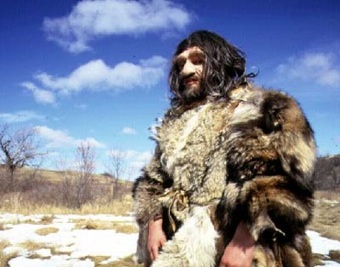 According to archaeologists and anthropologists, the earliest clothing probably consisted of fur, leather, leaves or grass, draped, wrapped or tied about the body for protection from the elements. Knowledge of such clothing remains inferential, since clothing materials deteriorate quickly compared to stone, bone, shell and metal artifacts. Archeologists have identified very early sewing needles of bone and ivory from about 30,000 BC, found near Kostenki, Russia, in 1988. Ralf Kittler, Manfred Kayser and Mark Stoneking, anthropologists at the Max Planck Institute for Evolutionary Anthropology, have conducted a genetic analysis of human body lice that indicates that they originated about 107,000 years ago. Since most humans have very sparse body hair, body lice require clothing to survive, so this suggests a surprisingly recent date for the invention of clothing. However, a second group of researchers used similar genetic methods to estimate that body lice originated about 540,000 years ago. Most information in this area has come from Neanderthal remains. 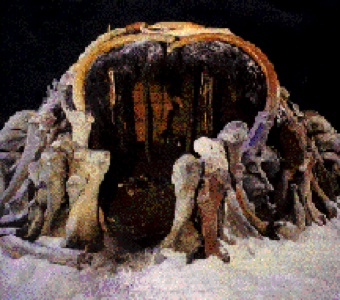 Mockup of a Prehistoric Dwelling

Throughout history, primitive peoples have made use of caves for shelter, burial, or as religious sites. However, a recent find by archaeologists in Japan gives evidence of the building of huts dating back as far as 500,000 BC. The site (on a hillside at Chichibu, north of Tokyo,) has been dated to a time when Homo erectus lived in the region. It consists of what seem to be 10 post holes, which form two irregular pentagons thought to be the remains of two huts. Thirty stone tools were found scattered around the site. 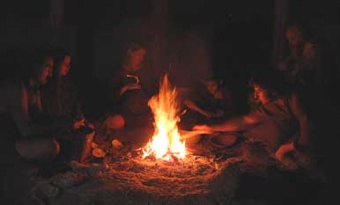 The ability to control fire is one of humankind’s great achievements. Fire making to generate heat and light made it possible for people to migrate to colder climates and enabled people to cook food — a key step in the fight against disease. Archaeology indicates that ancestors or relatives of modern humans might have controlled fire as early as 790,000 years ago. Some recent evidence may exist to demonstrate that man controlled fire from 1 to 1.8 million years ago (which would make it older than the knife below). By the Neolithic Revolution, during the introduction of grain based agriculture, people all over the world used fire as a tool in landscape management. These fires were typically controlled burns or “cool fires”, as opposed to uncontrolled “hot fires” that damage the soil. 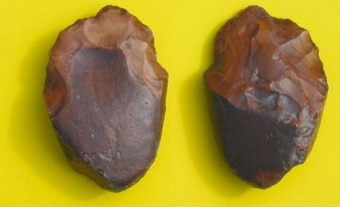 The earliest knives were shaped by percussion flaking from rock, particularly water-worn creek cobbles made out of volcanic rock. During the Paleolithic era Homo habilis likely made similar tools out of wood, bone, and similar highly perishable material that has not survived. As recent as five thousand years ago, as advances in metallurgy progressed, stone, wood, and bone blades were gradually succeeded by copper, bronze, iron, and eventually steel. The very first stone tool assemblage in prehistory is called the Olduwan by anthropologists. Olduwan tool use is estimated to have begun about 2.5 million years ago, lasting to as late as 1.5 million years ago. It is suggested that its users comprised a number of species of hominina ranging from Australopithecus to early Homo, and passing its loosely categorized tool tradition between more than one genus.